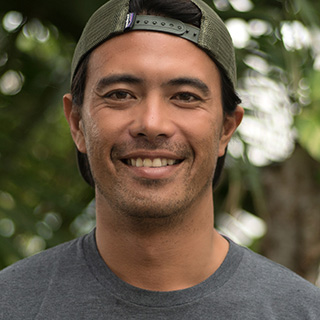 Influenced by his father Mike, Hayato Maki’s love for camping, motocross, skiing and other outdoor sports began at an early age. It wasn’t until he was 14 years old, when his family moved to Oahu, HI, that his older brother Claude got him into surfing. Hayato returned to Japan after graduating from Kalaheo High School and earned his Japanese professional surfer qualification, but competitive surfing failed to interest him and he left the contest scene to become a traveling soul surfer.

Hayato spent a decade based in Chiba, doing media-related work between surf trips for photo shoots, until the great waves of the outer reefs and an environment ideal for skin diving and spearfishing drew him south to Okinawa in 2011. Hayato still calls the town home, and on days without waves he grabs his mask, fins and speargun and goes skin diving to catch fish sustainably, which also helps him train.

For the past two years Hayato has also served as the surfing goodwill ambassador for the Papua New Guinea Tourism Promotion Authority, helping out children and spreading surfing around the country.
Career Highlights