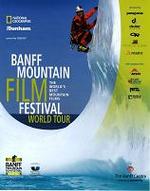 Steve from our online marketing team sent over a review from Tuesday's screening of the Banff Mountain Film Festival.

This is one of the opening lines from the short film Cayesh – The Calling that was featured as the Banff Film Festival came to Patagonia headquarters here in Ventura.

Although I was staring at a pile of work at my desk, the potential to be inspired by the films won out and I joined the good-sized crowd in the Grand Room.  And right out of the gate, the fellow climbers and I were inspired watching Sonnie Trotter send Cobra Crack at Squamish, a burly overhanging route dubbed the hardest crack climb in the world.

Everyone was amazed by the tenacity of the two riders that mountain biked from Mongolia to Calcutta, India. 8,000 kilometers of pedaling through choking sandstorms, illness, uncooperative border agents, sketchy maps, the Himalaya Mountains, and the humid teeming streets of India, brought them finally to the Indian Ocean.  The sense of discovery of the people and culture they encountered – as well as their own limits mentally and physically – made a strong impression and reminded us of why we travel.

Watching Steve House and Marko Prezelj climb a new mixed route high in the Peruvian Andes in a day made my hands sweat.  How did they make a movie on top of climbing 2,000 vertical up huge hanging ice pillars and sketchy rock?  Nice to see Patagonia duds in action on these guys. [Incidentally, Cayesh – The Calling was edited by our very own Stuart Bjornlie. -ed]

Psyche factor rejuvenated, we left with smiles on our faces.

It goes without saying that we can't recommend the Banff Mountain Film Festival enough. Huge thanks to the festival crew for taking the time to come by Patagonia. Check out the World Tour schedule and mark your calendars. If you can't make it, we'll console you with a similar but shorter version of Sonnie's Cobra Crack film…