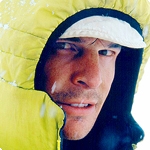 Steve House took the time to make one last call amidst the hustle and bustle of packing up base camp and organizing 30 porters. It’s a little rough around the edges but the sentiment is appreciated.

Thanks again to Steve for taking us along for the ride.

Previous posts from the series:

Special hello to the Alpine Club of Slovenia

See all stories from Steve House