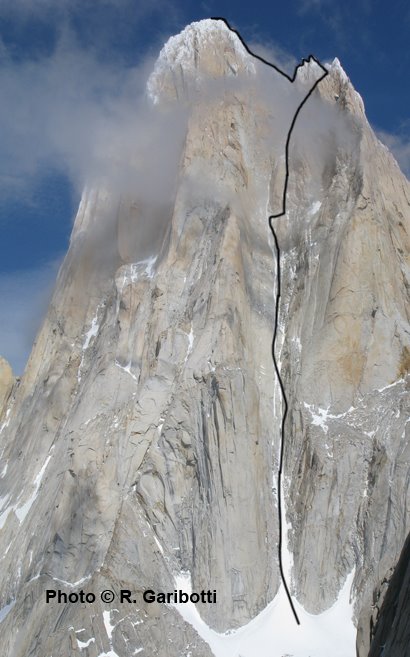 One of the reasons why my trips to Patagonia have always been among my most cherished climbing trips is because I have always broken new personal ground in terms of my climbing. All four of my previous trips to El Chalten resulted in what was at the time my best climbing achievement: Aguja Poincenot with Bart Paull my first trip, Fitz Roy with Mark Westman my second trip, the Marsigny-Parkin-to-West-Face linkup on Cerro Torre with Kelly Cordes on my third trip, and last year accompanying Rolando Garibotti on the Torres Traverse.

Climbing the Care Bear Traverse with Rolo this December was absolutely fantastic climbing, likely the most enjoyable climb I've done down here, but did not feel extremely serious or mentally taxing. And so, after a month of bad weather following the Care Bear Traverse (actually, there was one 1.5-day window at New Year's that I missed due to a respiratory infection), and with my ticket home looming imminently, it seemed that my spell of making personal progress every trip to Patagonia had finally come to it's inevitable end. But then, as the Patagonian weather seems prone to do, it decided to give me one last-minute opportunity to challenge myself…

Since Rolo had gone back to the U.S., I decided that I wanted to attempt to solo something. I had never soloed anything in Patagonia, and in fact I hadn't really done any hard soloing since I was seventeen in The Cascades, but I felt motivated again for that kind of adventure. Fitz Roy's Supercanaleta was an obvious choice. It is big (1,600m), classic, hard enough that I knew it would be quite challenging for me, but a sane idea because I had climbed it last year with Maxime Turgeon, and thus knew what to expect.

On Tuesday I hiked up from El Chalten to my camp on the Torre Glacier. I had just taken the last pill of a course of azithromycin that morning, and still felt a bit weak from my lingering respiratory infection. But Patagonia presents so few opportunities that you can't afford to miss any, and the weather forecast for Wednesday and Thursday was decent — not great, but probably good enough.

On Wednesday, Jan. 7, I left my camp on the Torre Glacier at 3:10am while it was still rather windy, and snowing lightly. Although the weather didn't look promising, I had nothing to lose in approaching the route, and headed toward the Filo del Hombre Sentado ('Sitting Man Ridge,' which divides the Torre Valley from the Glaciar Fitz Roy Norte Valley). Fresh snow on the Filo del Hombre Sentado slowed my progress on the fourth and low fifth-class rock, but shortly after first light I nonetheless reached the ridgecrest, approximately 1,000 meters above my camp in the Torre Valley. It is then necessary to downclimb about 200 meters off the north side of the Filo del Hombre Sentado, but this deposits one immediately below the Supercanaleta. The weather still looked menacing, but I rationalized that the couloir itself would be easy to downclimb if necessary, kicked steps up the snow cone below the couloir, and crossed the bergschrund at about 6:00am.

The majority of the elevation gain on the Supercanaleta is made in the couloir proper, and the difficulties here were moderate, with just a few steps of AI3. So I made good time to the jammed block where the real technical difficulties begin, albeit a bit tired from a lot of swinging and front-pointing. I took a break at the jammed block to eat, drink, rest, and bust out the rope and rack; I had brought one 60m 7.5mm rope, 1 ice screw, 8 Camalots, 3 pitons, 8 Stoppers, and a small selection of slings and carabiners. I tied into the middle of the rope so that I had one 30m length for hauling my pack, and the other 30m length to quickly set up a self belay where necessary.

The first pitch above the jammed block was steep and delicate; I had to take off my gloves for a few moves, and then endure the 'screaming barfies' as my fingers re-warmed above. The waterfall ice pitches above were in lean condition, but it didn't make them much more difficult. Pulling over a bulge of steep ice onto a lower-angled section, I was suddenly confronted with Frank, half-exposed from the ice. Other than doctored bodies in coffins at funerals, I had never seen a dead body before, especially one that had been exposed to the elements for years. I must admit that I felt sick to my stomach and thought I might vomit. More than anything else, seeing Frank was a grim and sobering reminder of the consequences if I made any mistakes — Frank fell while attempting to solo the California Route, and has been frozen on the Supercanaleta route ever since.

Shortly above the waterfall pitches the route leaves the couloir and trends up mixed terrain on the right wall. There were several delicate sections here, including one where I set up a quick self-belay, but before too long I reached the ridgecrest and junction with the California Route. It was about 1:00pm, so I felt I had made good time to this point, but I could tell that trend was about to change — the last several pitches climb up and around several towers on the ridgecrest, and contain the hardest rock climbing on the route. I had brought rock shoes and a chalk bag hoping to use them on this section, but not only was it far too cold to don rock shoes, but the ridge was severely rimed up. I immediately set up a self-belay for a 5.9+ traverse, and after climbing through it spent nearly fifteen minutes dealing with my rope and pack as they snagged on all the fins of rime sticking out from the rock. On a steep, thin crack a couple pitches higher I chose to solo-aid, making sure to always be clipped to at least two good cams at a time. The last technical pitch is the hardest on the entire route, and this was the only place were I set up a traditional self-belay, which meant that I had to climb the pitch, rappel back down the pitch, and then prussik back up. The weather had remained iffy all day, but while prussiking back up this pitch it took a turn yet worse, and I was buffeted by strong winds and lots of snow in the air.

It was a great relief to finally reach the third-class terrain that leads to Fitz Roy's summit — partly because I was happy to have successfully finished the route, but more because I then knew I would be descending the Franco-Argentine Route, and all day I had been dreading the possibility of having to descend the Supercanaleta with just one rope. I reached the now-familiar boulder on Fitz Roy's summit at 8:20pm. I had already run out of food and water, and was utterly exhausted (from my camp on the Torre Glacier it is 2,600 meters of elevation gain, including the elevation lost descending the north side of Filo del Hombre Sentado). Although I have been to many places that are far more remote, I don't think I've ever felt more out on a limb than alone on the summit of Fitz Roy with bad weather, 2.5 hours of daylight left, and one rope.

I had rappelled the Franco-Argentine route four times before, and the previous knowledge was invaluable. There are two places where I have normally made 50m overhanging rappels, so I wasted no time — I wanted to be sure to navigate alternate rappels through these areas while there was daylight left. I finally turned on my headlamp only a few rappels above La Silla, and before too long made my way down to the Brecha de los Italianos. I spent about 45 minutes climbing all over the Brecha de los Italianos looking in vain for a series of fixed ropes that I heard an Italian expedition had left at the beginning of the season, but finally gave up and started down the terrain I was familiar with. I was so tired at this point that every rappel was taking about twice as long as they had at first, but I finally made the last rappel over the bergshrund onto the Piedras Blancas glacier, and took off my harness. I never looked at my watch, but I think it must have been somewhere around 1:30 – 2:00am. I spent the next nine hours slowly stumbling down the glacier and out the trail to the road, mostly in 20-minute intervals of walking separated by episodes of falling asleep while shivering, sitting-up on my backpack.

Compared to the routes I climbed the past two years with Kelly and Rolo, the Supercanaleta is a very easy route, so I certainly didn't continue my trend of leaving Patagonia with my best-ever climbing route. However, the strain and intensity of climbing it alone, particularly in mediocre weather and with mediocre conditions, made it, I think, the overall hardest day I have ever spent in the mountains. While still enveloped in the stress of the solo, I remember thinking to myself, "OK, enough of that. I don't think I'll bother with any hard soloing again for quite a while." Of course, only half a day later, I already began to view the experience in a different light, and wonder about what else might be fitting objectives for a solo adventure in the future — funny how that works!

Photos taken while soloing are notoriously lame, so I'll try to make up for the lack of quality with quantity.

The view east toward Filo del Hombre Sentado and Cerro Pollone from the base of the Supercanaleta. Not confidence-inspiring weather: 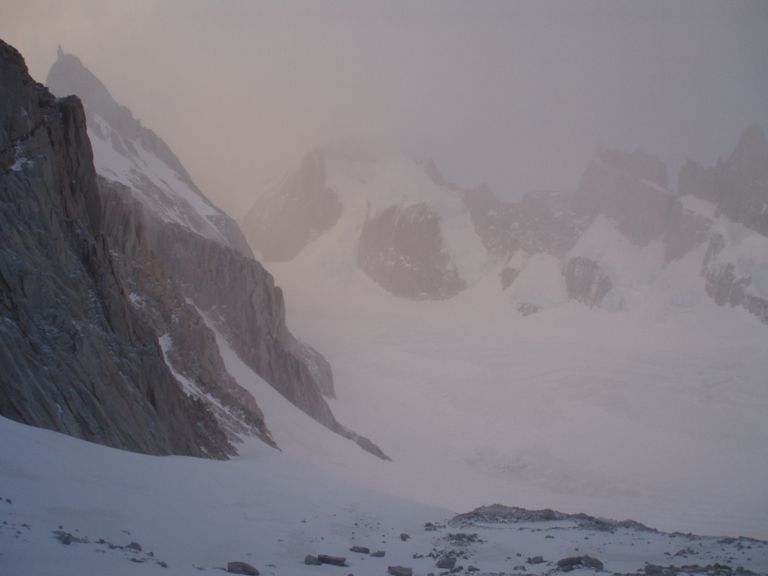 The view up the Supercanaleta from just above the bergschrund: 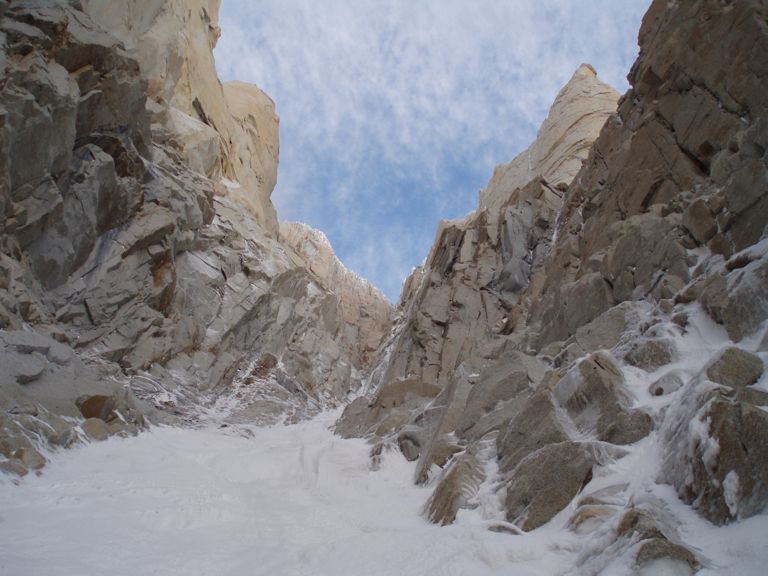 Looking up somewhere in the middle of the couloir: 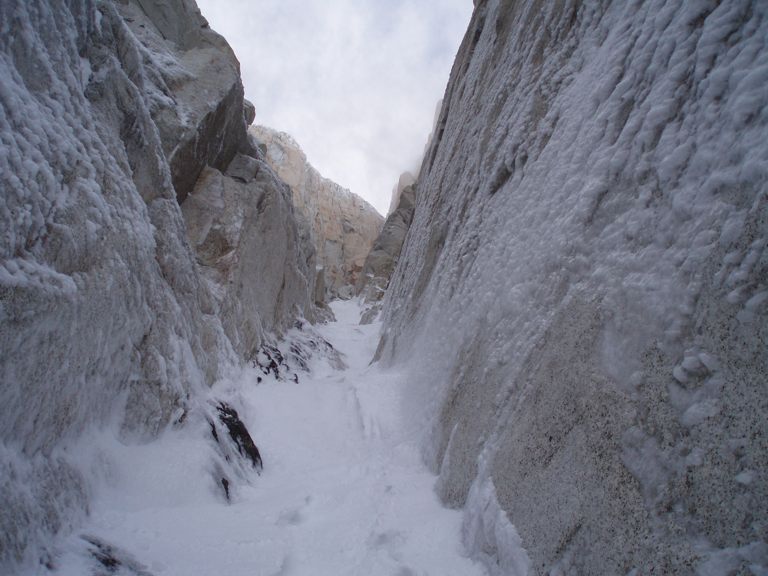 Concerned about the weather: 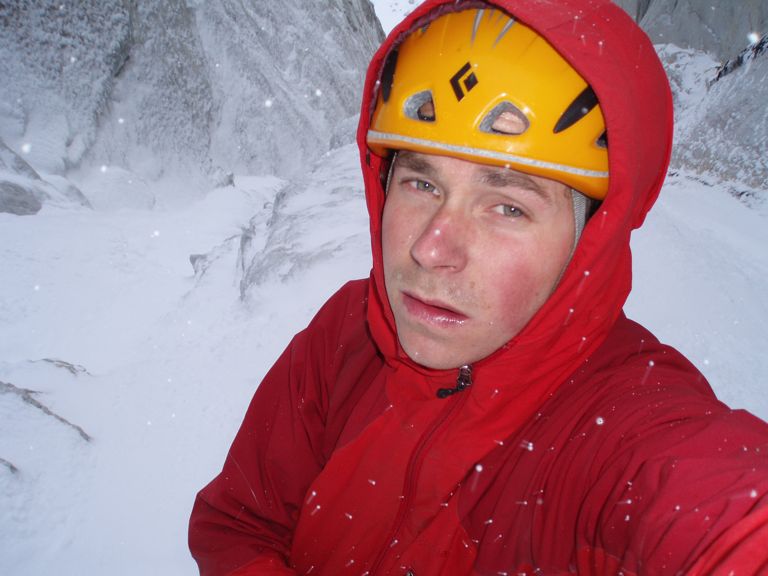 The first technical pitches above the jammed block: 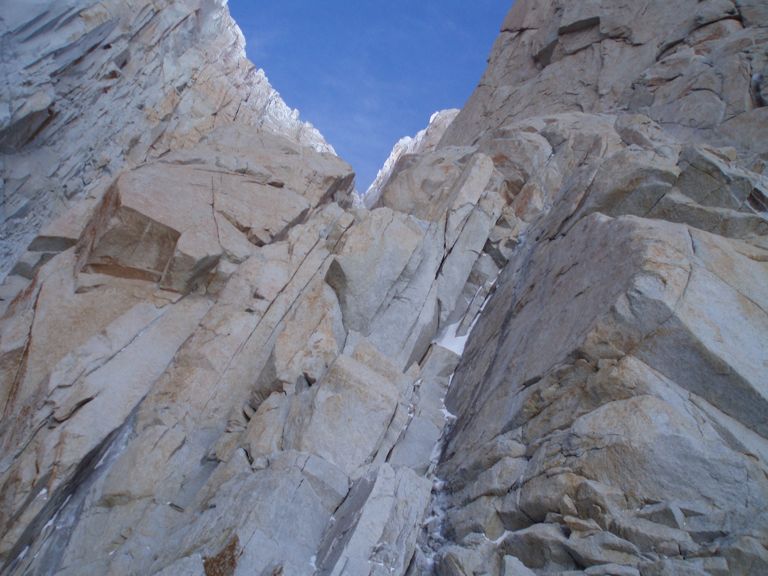 Bringing my pack up to my stance above the first section of steep cimbing: 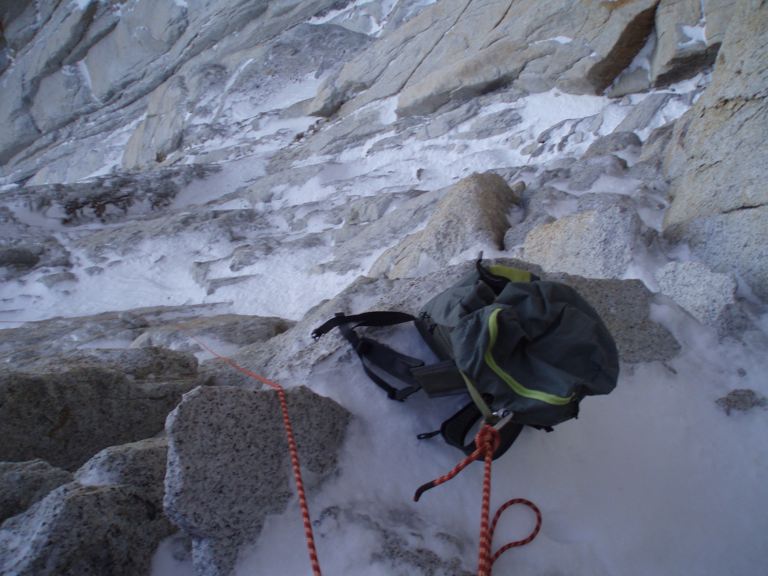 The waterfall ice sections were in lean condition: 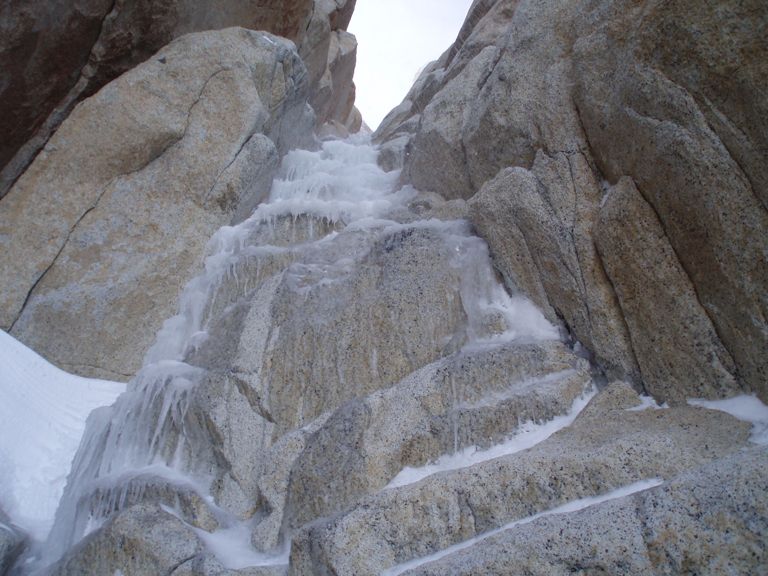 Looking up above the waterfall ice sections. The route heads out on the right wall before the chimney-ish feature in the gully proper: 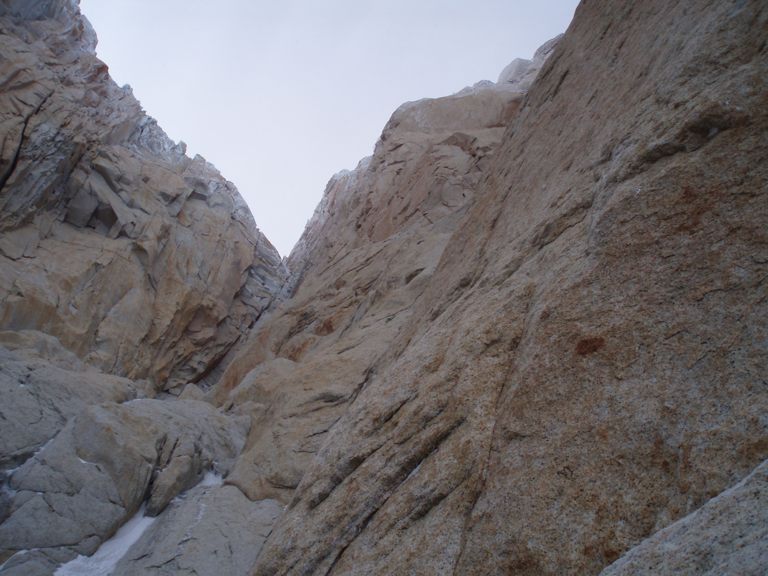 Looking down some delicate mixed terrain to the right of the 'red tower, ' just below the juncture with the California Route: 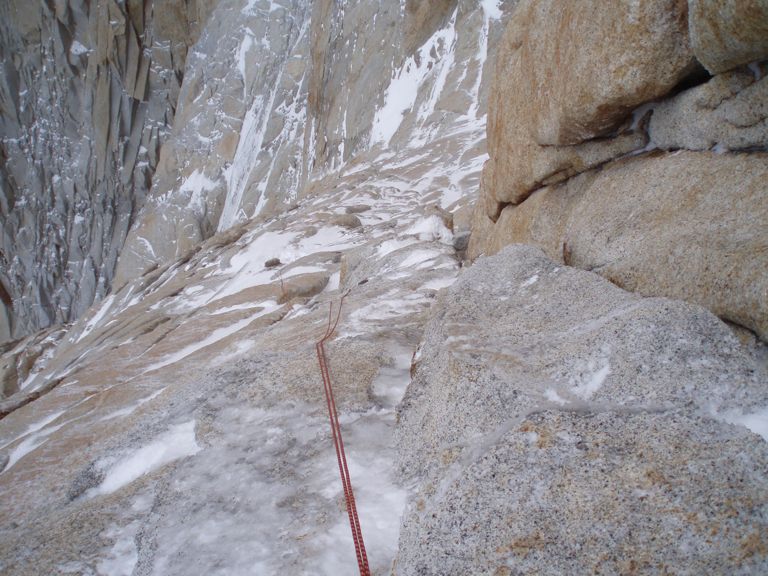 The upper towers were not rock-shoe-friendly: 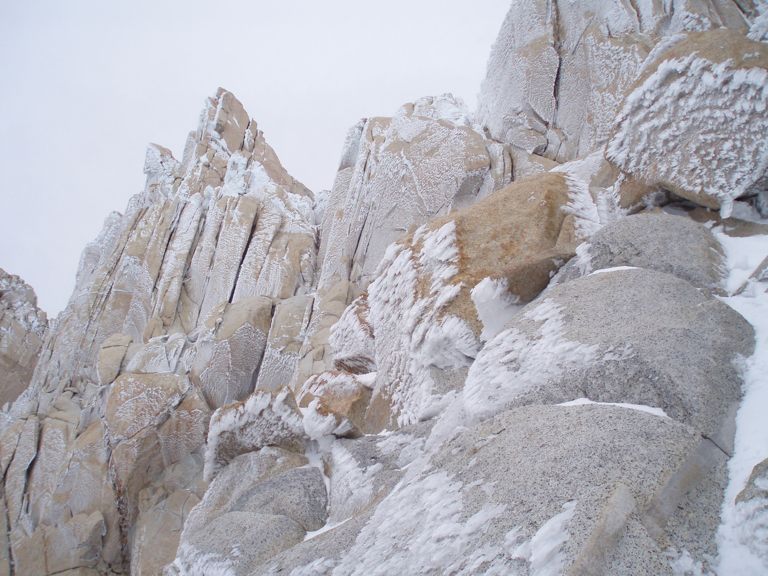 Looking back across the 5.9+ traverse, and all the pesky rime fins that the rope and pack will get stuck on: 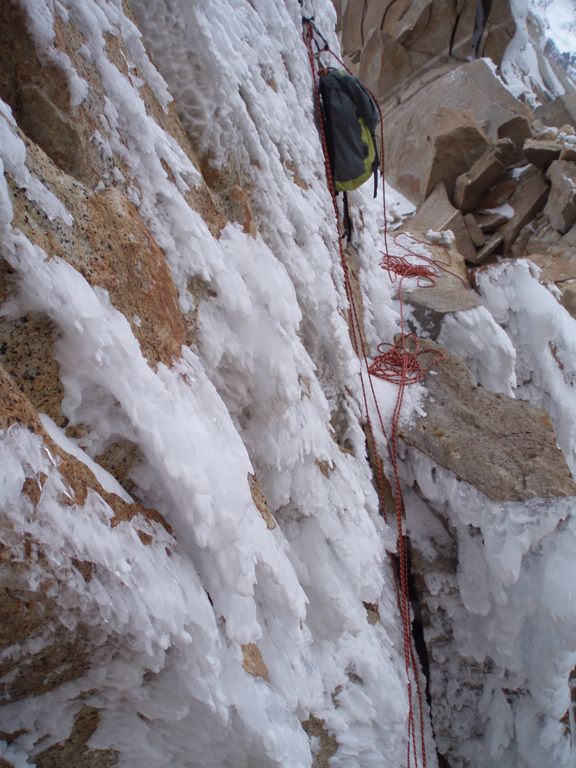 Looking down the ridge with Torre Piergorgio in the background: 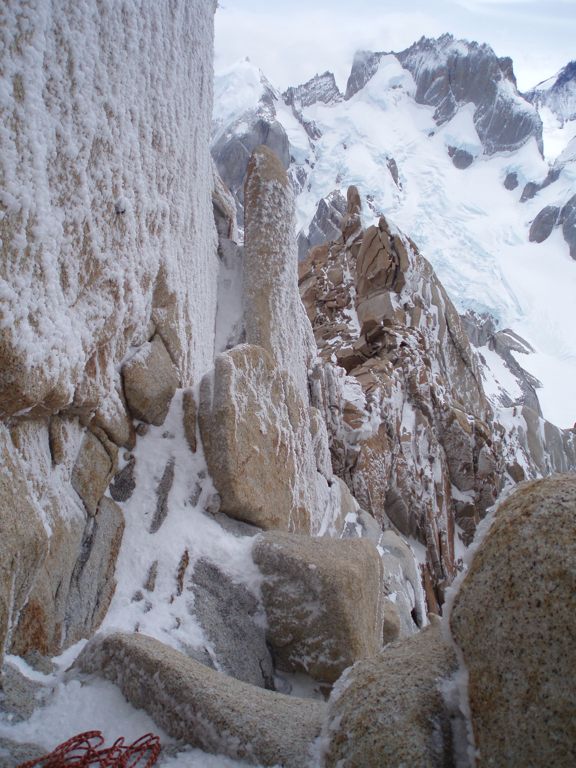 Looking down the 'flaring mixed grade:' 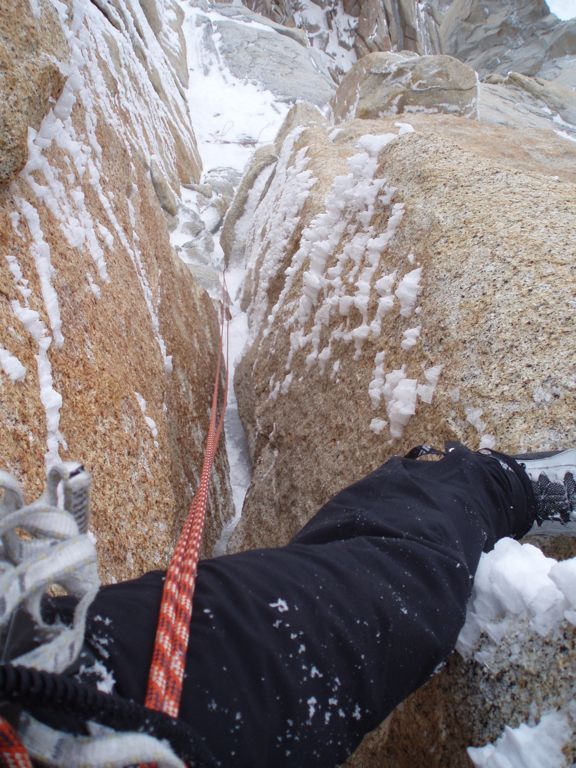 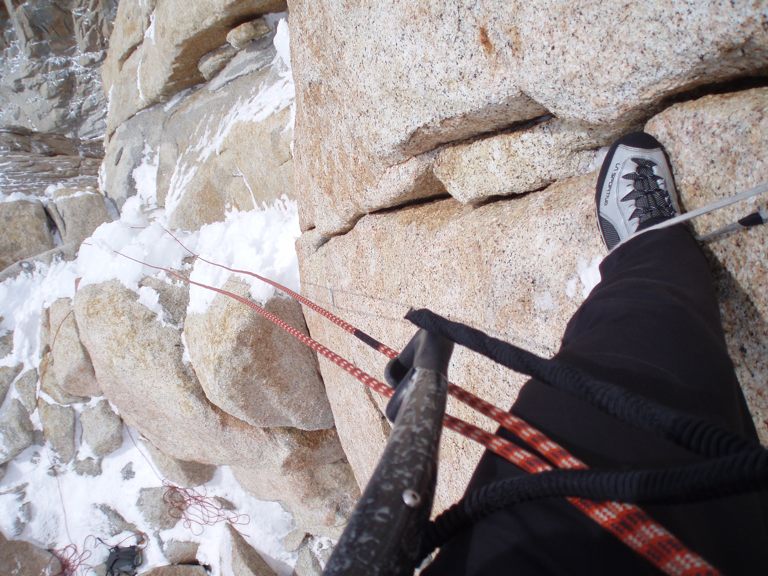 The last, crux pitch climbs up and left on the diagonal cracks: 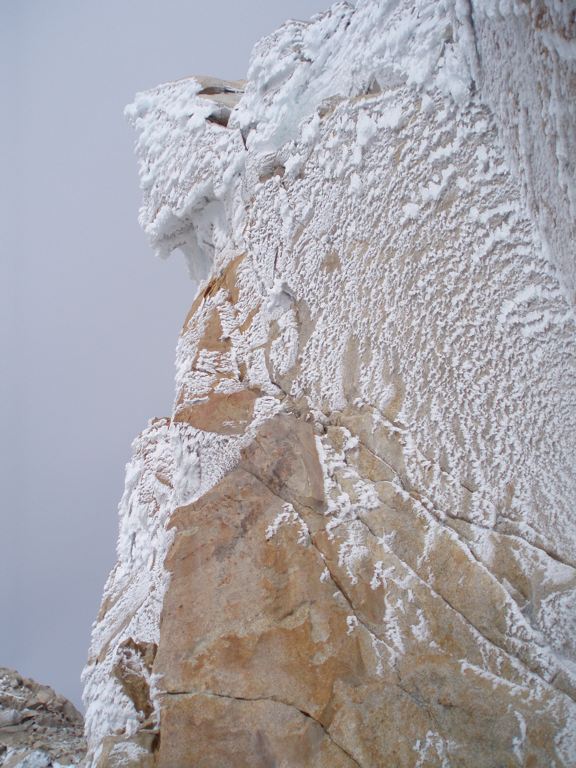 Looking down the crux pitch while climbing it with a traditional self-belay: 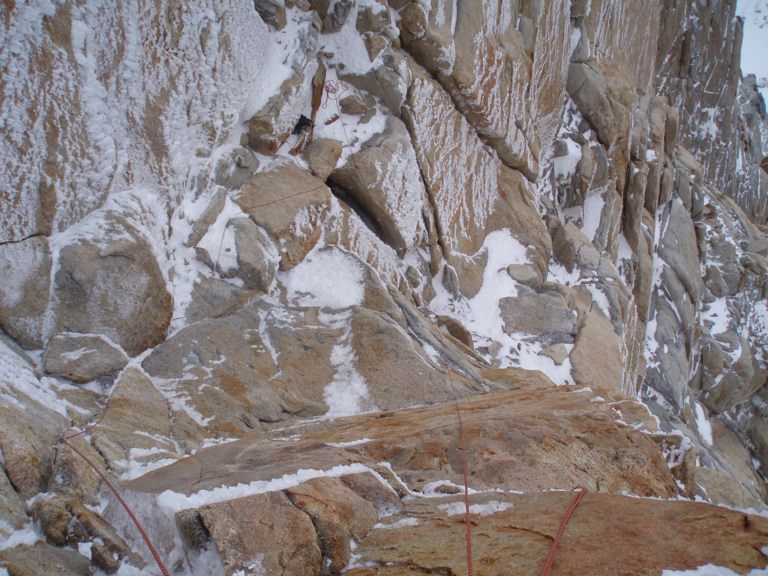 On the summit, cold, tired and anxious: 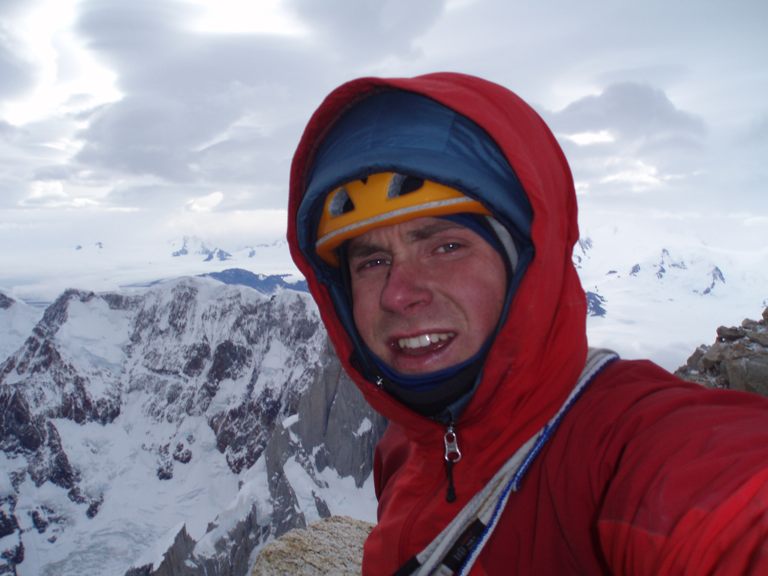 Being the expert Patagonia historian that he is, Rolando Garibotti sent me this list he compiled of previous Fitz solos:

Yves Astier (F) claimed a solo of the Californian in 85, but there is good reason to believe it was a tall tale.

For more on Colin's solo climb, check out Climbing.com's coverage. Visit Colin's blog, Skagit Alpinism, for stories and reports from some of his previous climbs.