One very fine day in 1973, Gary Ward and I were surfing Rincon and it was just perfect. We both had to leave around 1 p.m. to get back to work, but the look and feel of the Rincon on that day was more alluring than silver or gold. She was alive and dancing before my eyes. From the lineup, I glanced at the cliffs above and knew where I had to go. I had never seen her lines so clean and pure, just stretching to the horizon. What surprises, I wondered, awaited a drive to the top of the hill?

I knew, even had I not had my Nikon with me, I needed to experience that view. Moving slowly and cautiously, I drove up the small twisty road, occasionally glancing at Gary and thinking too much about the consequences of trespassing. Sign after sign ate away at my desire to capture one of the world’s most classic waves in all her glory as I thought about jail, long and tearful goodbyes to my wife and daughter, and the loss of my precious freedom. But the vision, or the promise of the vision, drove me on.

Lo and behold, we made it to the top, and when I looked around, nobody was in sight. The ranch house on the property seemed abandoned, and all three main gates were left wide open, inviting us to explore on this beautiful day. As we drove down into the magic setup, I felt the simple beauty of life surge through me, and I just f***ing ran with it.

Forgetting caution, I found the perfect field and the perfect view and I told Gary, “Go, man, go! I will direct you where to stand … just go look at the surf.” Gary ran down into that field and just lost himself, staring out silently at the waves. A few excited Nikon F clicks later, I yelled “Let’s go!” and just like that, we were gone. I felt like Sinbad, like I had just stolen the most beautiful image of a queen, forever mine, to share with the commoners!

Easily the most iconic picture taken of one of North America’s most iconic surf spots, this nearly 40-year-old image of the Queen truly has stood the test of time. Photo: Steve Bissell

About a week later, I got a call on the business line in my kitchen. The voice on the other end wasn’t the average person wanting to order some print or such. The voice was scary. “Is this Mr. Bissell?” he asked. “Yes,” I said meekly. “Well, Mr. Bissell,” the voice boomed, “this is Mr. Bates. The mayor of Carpinteria just informed me of your trespassing on my land to obtain some fantastic photo that has just been published in a surfing magazine.”

I remembered the big R.H. Bates road signs from our illegal journey, and immediately regretted our trespassing romp. I was sinking fast into worry, but Mr. Bates shook me back when he began to laugh and said, “You know what, Steve? I’d love to order some of those great shots.” He was playing with me, and instantly his great sense of humor made me love him!

I told him I’d be more than happy to give him some prints. One sunny Santa Barbara week later, I made the same drive up the sacred grade, only this time I had permission. I was met with a smile from a very big man whose looks matched my imagination of what a pioneer of this very special place would look like. 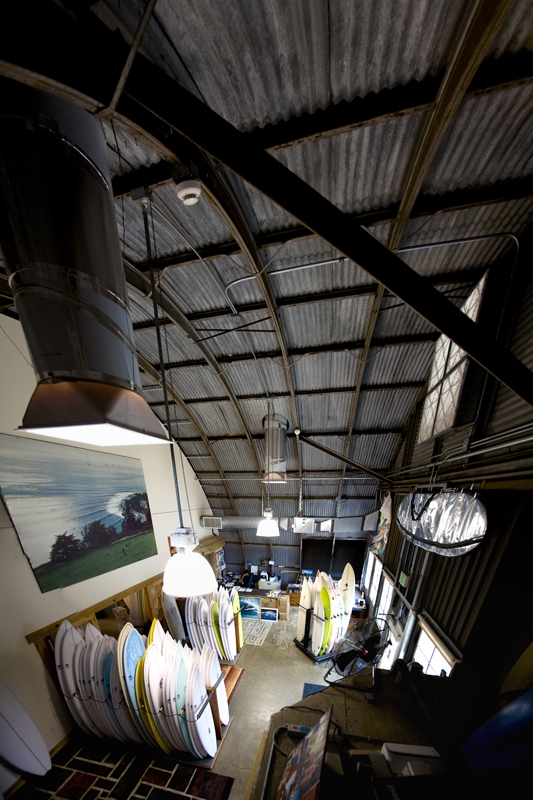 If you ever get the chance to visit Fletcher Chouinard Designs you’ll be treated to a mega-sized print of Steve’s photo above the boards. Photo: Tim Davis

He took the prints, showed me around his ranch, and loaded my crappy car with millions of avocados before sending me on my way. Thinking back, it really was one of those moments I live for. When, like on a roller coaster, you are going down fast one minute and the next you’re meeting an icon of Santa Barbara and he turns out to be a great guy with a classic sense of humor and a true lover of life.

Today, the Queen lives, and the King lives on in the memories of those who knew and loved him.

This story first appeared in the Santa Barbara Independent. The daughter Steve mentions works here at Patagonia HQ and she’s really proud of her dad.

Editor’s note: After reading Steve’s story and getting his blessing to republish, I thought it might be nice to see if any other Santa Barbara surf photographers had a present-day take on Steve’s iconic image. Sure enough, Joe Curren and Branden Aroyan have both been up on the hill in 2010 to capture some of the El Niño goodness Rincon surfers have been reveling in this winter.

First up is Joe Curren and a shot he took on January 16, 2010. Having grown up in Santa Barbara, few surfers can turn heads at Rincon like Joe. His career as a professional surfer has allowed him the opportunity to travel the world since the age of 18. The places and people Joe encountered while surfing inspired him to pick up photography and he’s been making a living at both to this day. Check out Joe’s website and blog for more photos and stories, including his book One. Photo: Joe Curren 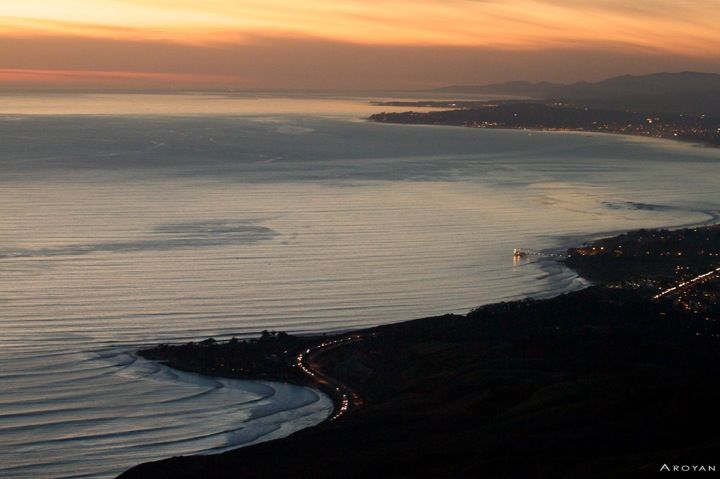 Here we have Branden Aroyan’s even more elevated perspective on the point. That’s Rincon in the foreground and the rest of the Santa Barbara coast stretching towards the horizon. “After surfing all day in complete awe of the stacked lines we dragged ourselves off the beach just in time to head up the hill,” said Branden. “We passed through gates and hairpin turns – we felt like Austin Powers making a three-point turn from trail to trail – and finally reached the top where the others had a few beers going and were soaking up the view.” When he’s not shooting or surfing, Branden sells beautiful organic-cotton clothing featuring his photography under the label Low Tide Rising. Photo: Branden Aroyan 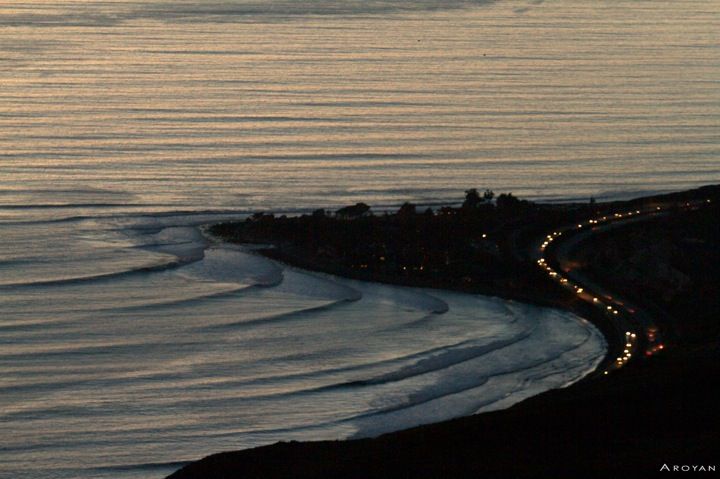 [With thanks to Sunday and Ethan.]