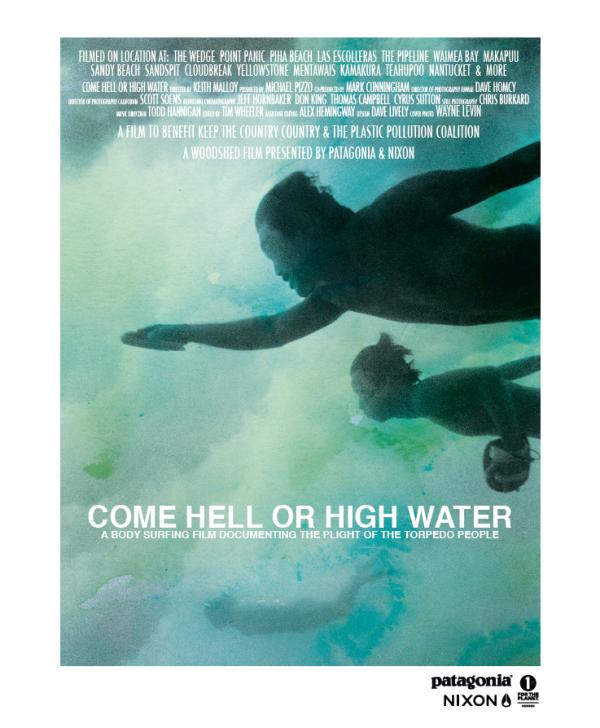 Woodshed Films, Patagonia and Nixon are proud to announce the world tour for Keith Malloy’s debut film project, Come Hell or High Water. The film explores the history and progression of the sport of bodysurfing and the pureness that comes from riding a wave. Shot primary in 16mm, the film takes a unique look at the culture, beauty and simplicity of the sport, capturing the stories and locations of those who belong to this community.

While Keith is most widely known for his time in the water as a surfer, his exploration into the world of bodysurfing began some 10 years ago when he wanted to reconnect with the ocean and did so through bodysurfing. Said Malloy about this project, “It’s about taking a breath and kicking your feet in the big blue sea.”

A sold-out crowd watched the world premiere of Come Hell or High Water last weekend at the New York Film Festival. The film makes its west-coast debut this Friday, September 23, at the La Paloma Theater in Encinitas, California and will continue to crisscross the globe with more stops in Southern, Central and Northern California, North Carolina, London and more. A portion of the proceeds from the tour’s ticket sales will be donated to The Plastic Pollution Coalition, a global alliance aimed at working toward a world free of plastic pollution and its toxic impacts.

Hit the jump to watch the trailer and see the current film tour schedule.

Oct. 7
Ventura, CA. @ Patagonia Headquarters (upper parking lot)
This is an outdoor event (bring a blanket or a lawn chair) and admission is free. The doors will open at 7:00pm and the movie will start at 8:00pm. There will be a live performance by the Brotheryn Studios All Stars w/ Todd Hannigan, Jesse Siebenberg, Ron Hargrave and Sam Bolle. The event includes giveaways, beer and a Q&A with Keith Malloy and the crew after the movie.