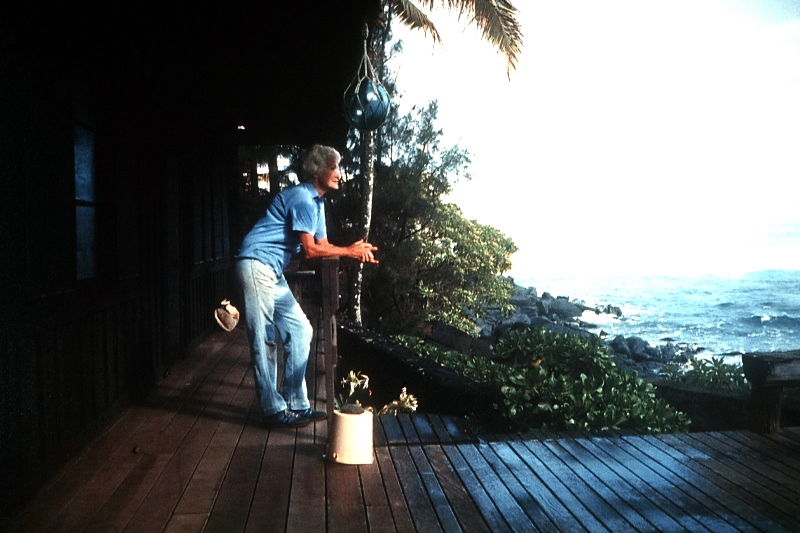 Our good friend Dale Hope took the long drive from Town out to the North Shore of O‘ahu and sat down with Audrey Sutherland. While they sat on her deck (which overlooks the surf break named Jocko’s, named after her son Jock) they talked about Audrey’s new book, Paddling North, just out from Patagonia Books. Here’s that conversation.

DALE HOPE: Tell me about your latest book, Paddling North. 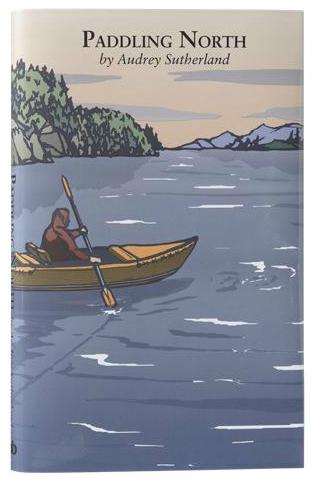 AUDREY SUTHERLAND: It’s a story of a trip I took from Ketchikan around Revillagigedo Island and then across to Prince of Wales Island. I then hitchhiked with my boat deflated and folded up from Hollis to Craig, and then continued on the water to Point Baker and across Sumner Strait. From there I went up to Kake and crossed over to Baranof Island, then on the outside of Chichagof Island. I ended up in Skagway via Icy Strait, Chatham Strait, and the Lynn Canal. That’s the actual boat right there, on the deck against the house.

DALE HOPE: What inspired you to write about that trip?

AUDREY SUTHERLAND: I keep journals on all my trips, whether the trip was to Moloka‘i or wherever. I have always kept a diary, even when I was a kid. I don’t know maybe it’s ego, but it helps if you want to remember something later. I’ve got diaries from way back, every trip I always kept a journal. Here’s one. What year is on there?

AUDREY SUTHERLAND: I wrote everyday in my journal: where I went, what I saw, what I ate….

DALE HOPE: What got you into paddling kayaks?

AUDREY SUTHERLAND: I had been swimming the north coast of Moloka‘i, which is twenty-five miles or something. I would swim three or four miles and come ashore and camp. I had swim fins and I towed a surf mat to carry my camping gear. But later I saw an ad in one of the sports magazines about a six-foot kayak.  So I ordered it and took it to Moloka‘i and it was great, it worked for what I wanted to do. Having a boat, I could carry more gear and take longer trips.

DALE HOPE: You have paddled a lot in Hawai‘i, what inspired you to choose to go to Alaska?

AUDREY SUTHERLAND: I was working at the army as a career counselor and my territory was Hawai‘i, Samoa, the Philippines, and Alaska, and I talked to every 10th grader in all of those places. So I was very familiar with Alaska and I saw it had a lot of potential for paddling. I had found a place that didn’t have a lot of people and I went there and learned the basic skills to survive in that place.

DALE HOPE: Did you ever think when you started going to Alaska you’d go back more than twenty times?

AUDREY SUTHERLAND: I don’t think so. But because there was so much open country and very few people I kept going back.

DALE HOPE: So what was your favorite meal on your kayak? 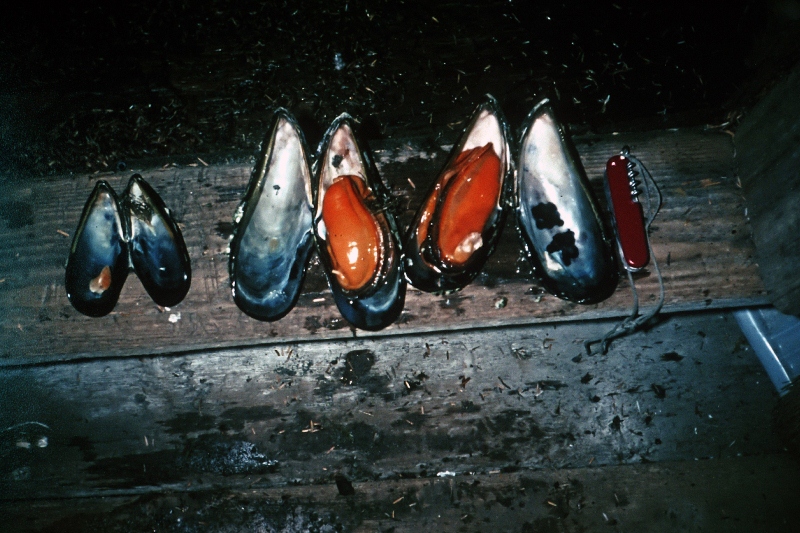 [All photos courtesy of Audrey Sutherland]

DALE HOPE: Did you bring garlic with you?

AUDREY SUTHERLAND: Oh yes, and olive oil, and Hawaiian salt. I always had a bottle of wine in the bow and one in the stern. I ate very well. I’d gather wild foods up there – wild greens, mussels. I didn’t fish much because that’s too hard to do. 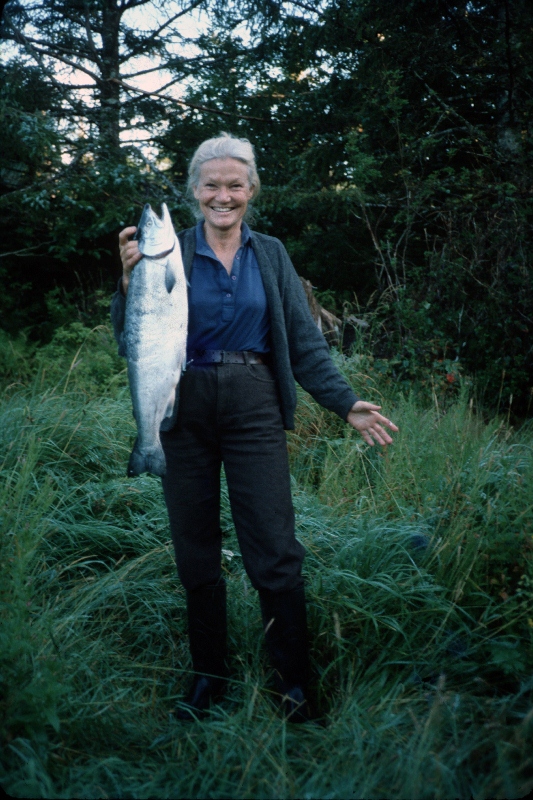 DALE HOPE: So you would eat on your kayak in the middle of the ocean? That’s neat. And you were a bit of a gourmet on your adventures yeah? 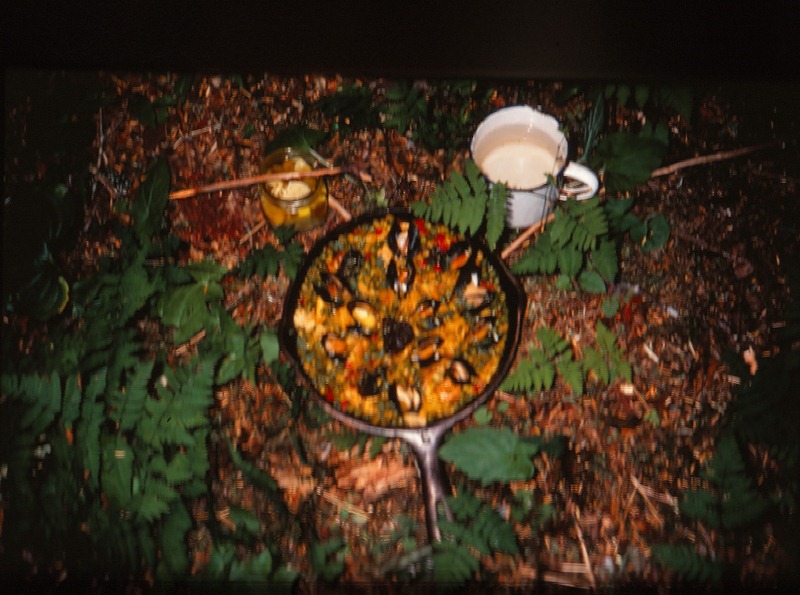 DALE HOPE: Why did you choose an inflatable kayak for your journeys?

AUDREY SUTHERLAND: Because it’s lighter weight and I could deflate it, pack it up, and take it along with me. When I got where I was going I could pump it up with my foot pump and I would have a very capable little boat. I remember on one of my Moloka‘i trips I must have left the foot pump somewhere so I had to blow it up with my lungs. That took awhile. 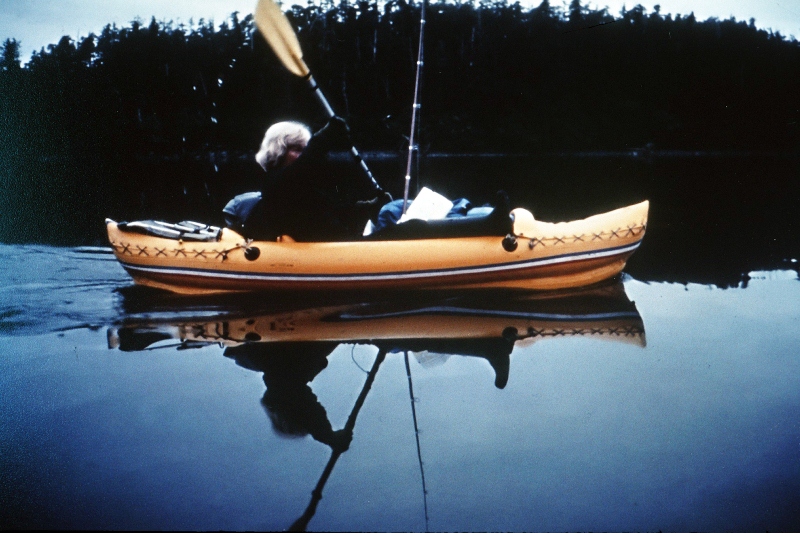 DALE HOPE: Did you ever get a leak?

AUDREY SUTHERLAND: Once I ran into a sharp shell and got a leak, but I patched it pretty quickly. That was twenty years ago and that patch is still holding.

DALE HOPE: That portability has enabled you to go places most people could never go.

AUDREY SUTHERLAND: Yeah. I can still swim, but with a boat it’s much better. I always try to go down wind to ease the paddling.

DALE HOPE: Did you get into some surprise storms?

AUDREY SUTHERLAND: Oh there were always storms, but I could always go ashore. I paddled fairly close to shore except when I had to cross a channel.

DALE HOPE: What was the biggest channel crossing you did?

AUDREY SUTHERLAND: I think ten or twelve miles. I don’t paddle fast in a boat like that so even that distance would take some time.

DALE HOPE: Did you ever get toppled by surf when you were coming into shore?

AUDREY SUTHERLAND: Oh yeah, but I kept two lines fastened to the boat: one went over my head and under my arm so I wouldn’t lose the boat, the other one was tied to my paddle.

DALE HOPE: Audrey what was your most memorable day paddling your kayak in Alaska over all those years?

AUDREY SUTHERLAND: It would be hard to pick one. Orcas once came up super close. Nothing bad happened, the one that got closest was just curious. I just sat in my kayak with my boots up on the side of the boat for stability. There were six of them and I had seen them swimming up the channel around Revillagigedo Island. 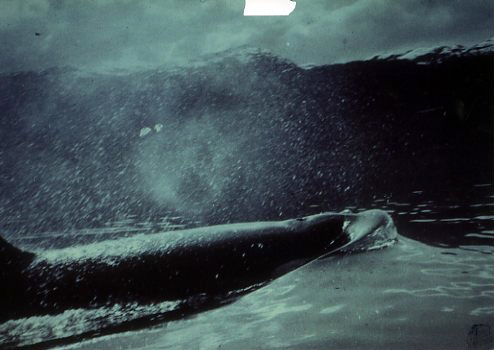 DALE HOPE: Did you ever have a bear get close to you?

AUDREY SUTHERLAND: Yes, but bears usually aren’t a problem. They’re curious, but they’re wary, and I’m curious, but very wary. They would get to about fifty feet and stop and think about it. In my book I said something about if the bear approached closer, then you would climb a tree, and if you were lucky the bear wouldn’t climb up after you. But I think that depends on what kind of a bear it is. Brown bears are the more dangerous. I heard somewhere if you climb a tree and the bear climbs after you it is a black bear, if it pushes the tree over it is a brown bear. 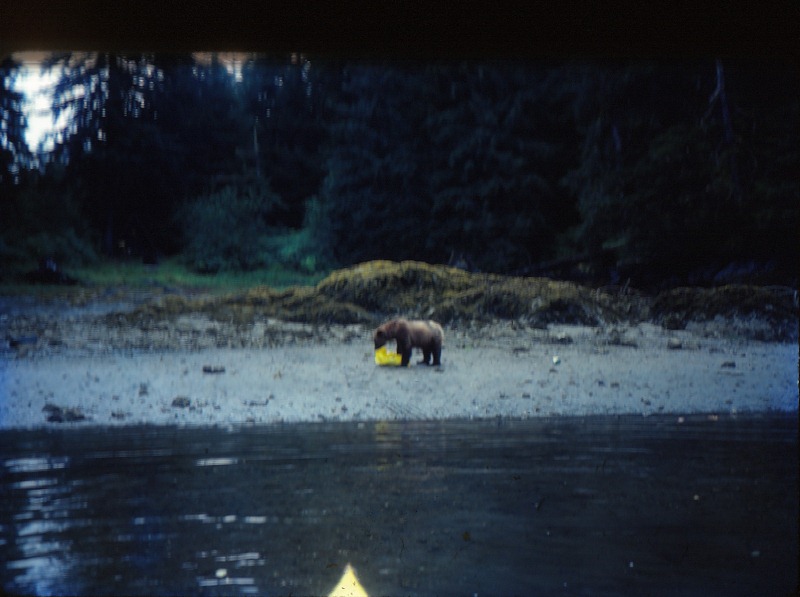 I remember another time, there was a wolf coming home from his morning hunt and he was trotting along the slope. I saw him and I thought oops and he looked at me and I’m sure he thought oops.  So he went that way, and I went this way, but it was great to see one

AUDREY SUTHERLAND: My mother taught school, and right after the last hour of the last day of school was done we were on our way up to the mountains where we had a cabin. It had a wood stove and no electricity. It was in an area called Martin Flats, at about 6,000 feet in the San Bernardino Mountains. Right next to us was the Los Angeles YMCA camp: there were a lot of camps nearby. Every morning I had certain chores to do and when I finished those I was out of the cabin and into the woods. There were just a few roads and a meadow down below. So I’d take off and go down in the meadow and there were some horses there that someone had let go from the stable.

DALE HOPE: Would you try to ride the horses?

AUDREY SUTHERLAND: Yeah I’d get aboard and ride the horses until they bucked me off, but the meadows were soft. There were yellow pines, ponderosa and of course oak trees, black oak, Quercus kelloggii, for some reason I learned the scientific names. When we first arrived each summer, we would take the shutters off the cabin that protected it from the snow and rain, and I’d haul them up a tree and make a tree house.

AUDREY SUTHERLAND: My father died when I was five, he had been a newspaper editor and then a high school coach and teacher. So my mother raised the three girls from his first marriage and the three girls they had together. When I came along I was daughter number six. It was a good childhood.

But I would go off by myself when I got mad at the family. I remember once when I was 14 years old I went from our cabin to the top of San Gorgonio Mountain fourteen miles away. I got halfway and then camped in the meadow and there were eyes out there all night and I thought about mountain lions and wolves. I woke up in the morning and they were cows. Somebody put their cows out to pasture in the meadow up there. It was scary in the middle of the night but when I woke up in the morning and found cows I had to laugh at myself.

DALE HOPE: Was that just a one-night camp out when you ran away?

AUDREY SUTHERLAND: Oh no, that was four nights. In those days we didn’t have backpacks, so we put a blanket down on the floor and put our stuff across the blanket and rolled it up and then carried it over our shoulders. I have pictures of me at the top of a Jeffrey pine flying 200 feet high with the wind up.

DALE HOPE: What makes you want to paddle your canoe, your six-foot canoe, by yourself, alone?

AUDREY SUTHERLAND: It’s so much simpler alone, you don’t have to worry about whether somebody is hungry, or tired, or angry, or whatever. You just go alone, it’s so much simpler that way. When you’re by yourself you can stop and look at something; learn a flower, watch an animal or a bird, or whatever it is. 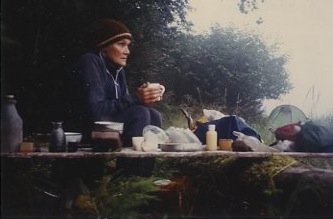 DALE HOPE: Did you ever have any times when you were scared to be by yourself?

AUDREY SUTHERLAND: I don’t think so. I learned very young what I could and couldn’t do and what dangers were out there. There were no wild animals out to hurt me. There was one bear and there were a few wolves and a few mountain lions, but nothing really. They were more afraid of me than I was of them.

DALE HOPE: I’m looking through your collection of gear. Tell me what all is in here.

DALE HOPE: This looks like honey in your food stores.

AUDREY SUTHERLAND: I’m not sure. This is vinegar, dish detergent, and Meyer’s Rum for birthdays. Salt and pepper. Oh, this is the stove.

AUDREY SUTHERLAND: No, it really wasn’t, I have another stove in here somewhere. Spatula, egg beater, tea box. I have tea every morning now, but for a long time I had coffee. Beef bullion, lots of little packets of beef bullion and beef seasoning. It’s probably soup mixes come to think of it. This is my mug, and spice cabinet. The mug would fit in here like and eggs, fresh eggs I’d take in here. 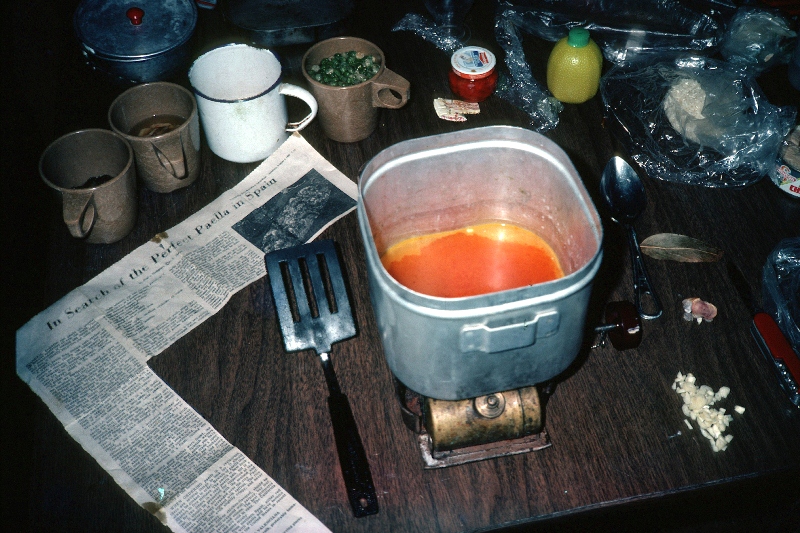 DALE HOPE: How long has it been since you last went to Alaska? 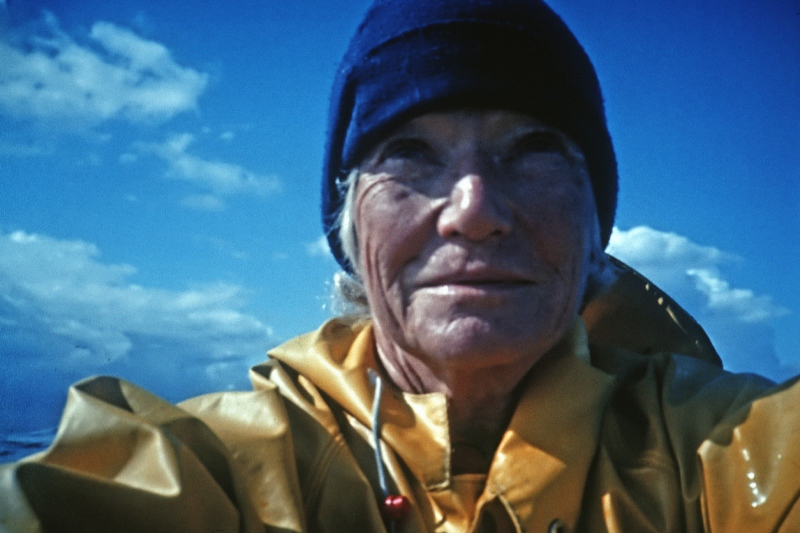 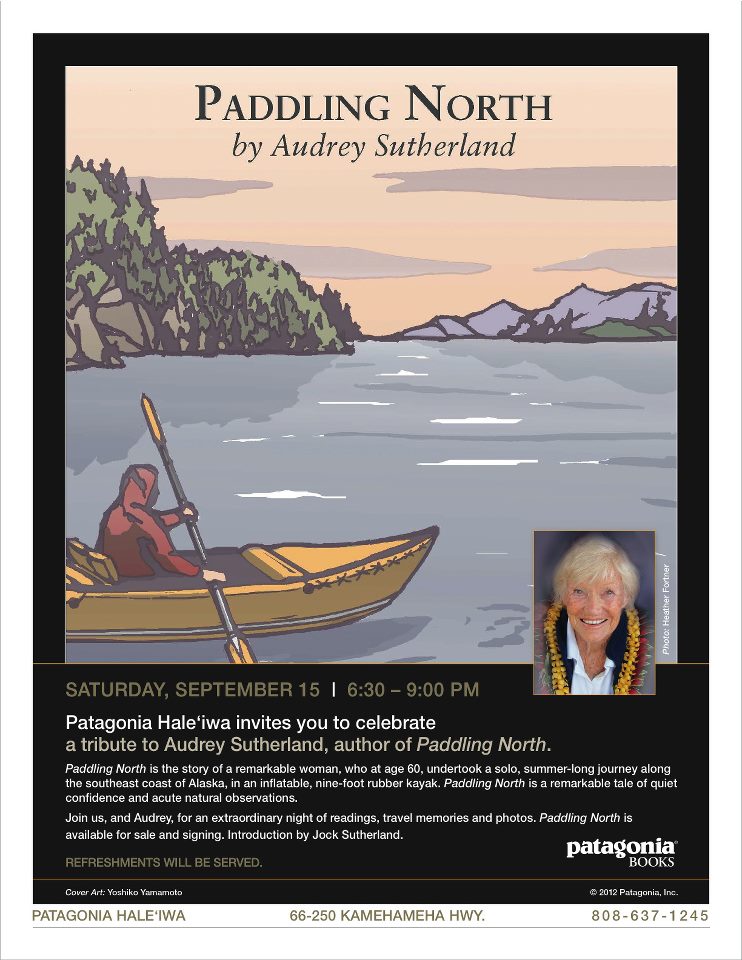 Love to read? Keep up with everything Patagonia Books on our new social channels: