Worn Wear is the brainchild of Keith and Lauren Malloy. Inspired by the years of use Keith was getting from his surf gear, they decided to start a Tumblr blog where folks like you can share stories about your favorite piece of Patagonia clothing. Yvon Chouinard helped get things started when he wrote about making the grandfather of all fleeces.

Today we're happy to share a recent entry from Worn Wear and invite you to submit one of your own. It's easy to do and everyone who gets their story published will receive a Worn Wear patch from the Malloys. 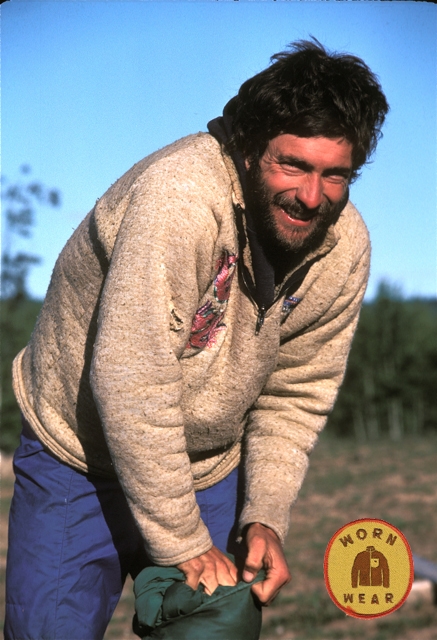 I’m pretty sure I bought this sweater from Bob Wade at the Ute Mountaineer in Aspen. Probably 1978. It was utilitarian to say the least. Light, tough, quick dry and ‘tech’. I started wearing it under a paddling jacket instead of the old wool sweaters that were the standard then.

In 1979 I landed an invitation from Roger Brown to paddle in Nepal on an American Sportsman film extravaganza. The plan was that a film crew would document the second ascent of Ama Dablam and then film three kayakers making the first descent of the Arun River. It was an all-star cast of mountain, river and film people. The kayakers received an invitation to trek to base camp and help out on the mountain. On the day I left Kathmandu I had the dragon embroidered onto my sweater. I spent a month on the mountain and when it came down to the second summit party it was just me and Doug Robinson. We made it. Thanks again Doug. The Arun was amazing too.

The photo by Rob Lesser was taken on the 1981 first descent of the Stikine River in British Columbia. It was also an American Sportsman episode. We paddled, scouted and portaged. There is still a hole there named after me. I do not reccommend going into huge holes to get your name into the guidebook.

The pile sweater survived many more years of loving abuse.

Have a story of your own? Visit Worn Wear and click the submit link today.