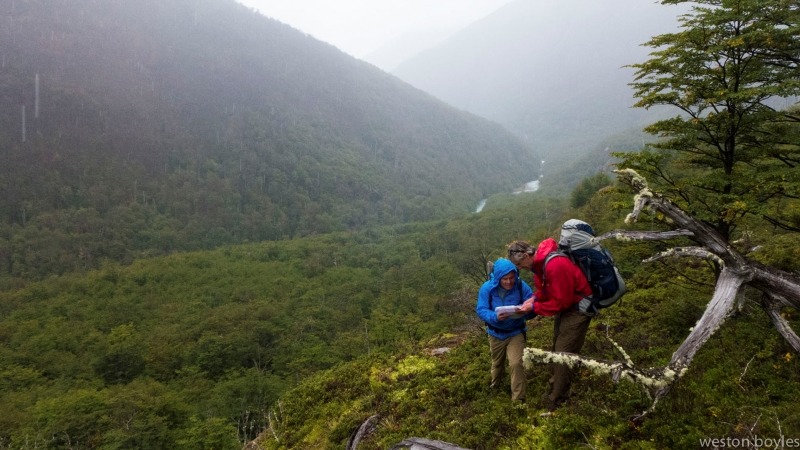 The official grand opening of the new Patagonia National Park in southern Chile is scheduled for late November but the park, even now, is attracting thousands of visitors including three of our trail running ambassadors who, in January, ran parts of the 100-plus miles of trails already constructed. Patagonia-the-company funded part of that construction but the new park, projected to be nearly 650,000 acres, has entire watersheds currently outside of the existing trail system.

Editor’s note: As we continue to expand on The New Localism, it’s important to revisit previous campaigns and breathe new life into them. Today, Rick Ridgeway reconnects with Mile for Mile which is more than halfway to its funding goal. Remember, Patagonia, Inc. will match your Mile for Mile donations through 2015.

In March, I joined two friends, Jib Ellison and Weston Boyles, to scout a potential route that could provide a more-or-less direct link between the two great lakes that bookend the park: Lago General Carrerra on the north and Lago Cochrane on the south. These two lakes are so stupendous that when people first see them they appear mythical, like scenes from a Maxwell Parrish painting.

Above: Finding a route above the Aviles Norte on day two. The team had Google Earth maps and an iPhone app that recorded positions that Patagonia National Park will use if they create a permanent trail along the route. Photo: Weston Boyles

We started on March 1st at Lago General Carrerra and were pleasantly surprised to find a cattle trail that gauchos have used to get their animals to summer pasture. But our easy start ended at a fast-moving river that you could probably cross on horseback but on foot was going to be potentially dangerous: the only ford was right above a narrow gorge with no eddies.

We made camp and made our strategy. The next morning, I stripped and made a ferry-angle swim to other side. My friends tossed me a small line tied to a rock that I secured to a tree. We zipped the packs across and then Jib and Weston made their own swims across the glacial-fed water. We had another crossing later that day but this time we made it with packs on and arms interlocked.

That evening, we camped at a col between drainages and by the end of the third day we joined one of the existing trails in the new park on a segment that our trail running ambassadors had traversed the month before. We were back at the park headquarters by the end of our fourth day where we reviewed our route and photographs with Kris Tompkins, Patagonia’s former CEO who now directs Conservacion Patagonica, the foundation creating the new park.

She agreed it would make a terrific addition to the park’s trail system. The only thing needed is two, new swinging bridges over the river crossings, a short extension of existing trail to reach Lago Cochrane, and acquisition of the land where we started the hike, property that is currently out of the park’s boundaries. But Kris and her husband Doug have built this park using private donations and philanthropy so acquiring more property, and building one or two more bridges … it reminded me of a sign that Doug used to have above his desk when he owned the woman’s apparel company Esprit. It said, “Commit and then figure it out.” 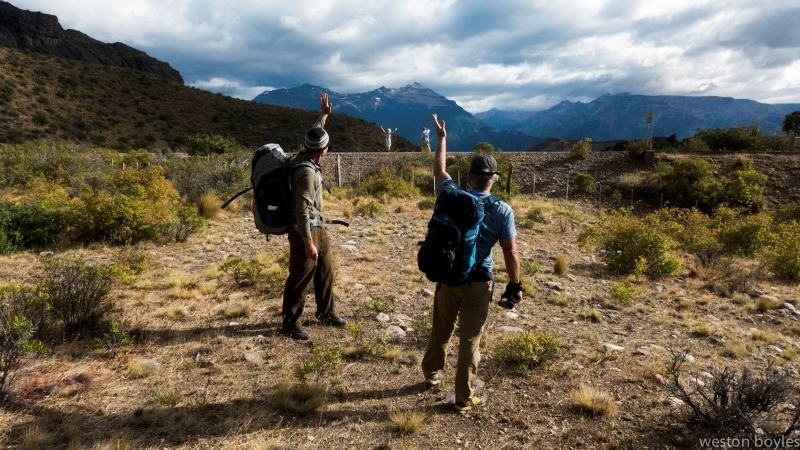 Jib Ellison (left) and Rick Ridgeway (right) wave goodbye to Kris Tompkins, former CEO of Patagonia and founder of Conservacion Patagonica, at the start of the hike. Photo: Weston Boyles 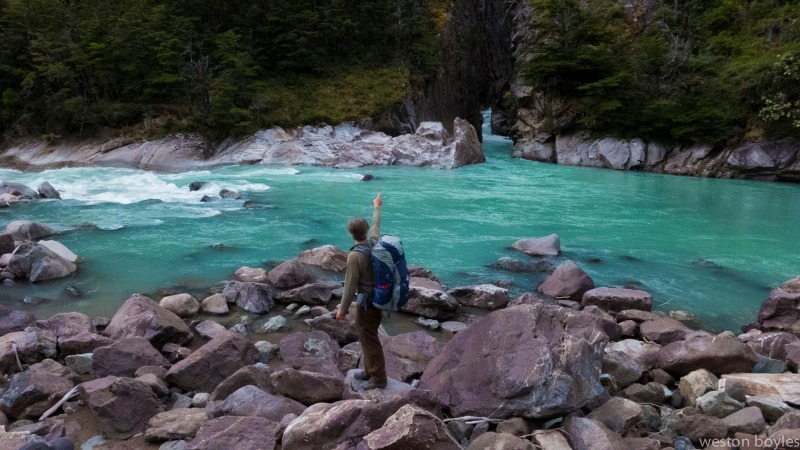 The beginning of the narrows of Rio Aviles Norte, day one. The trick was to find a route along the top of the narrows. Photo: Weston Boyles 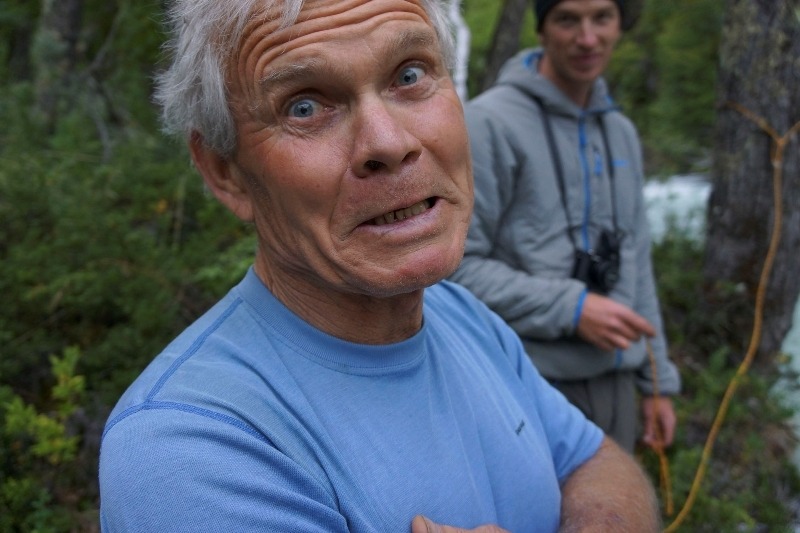 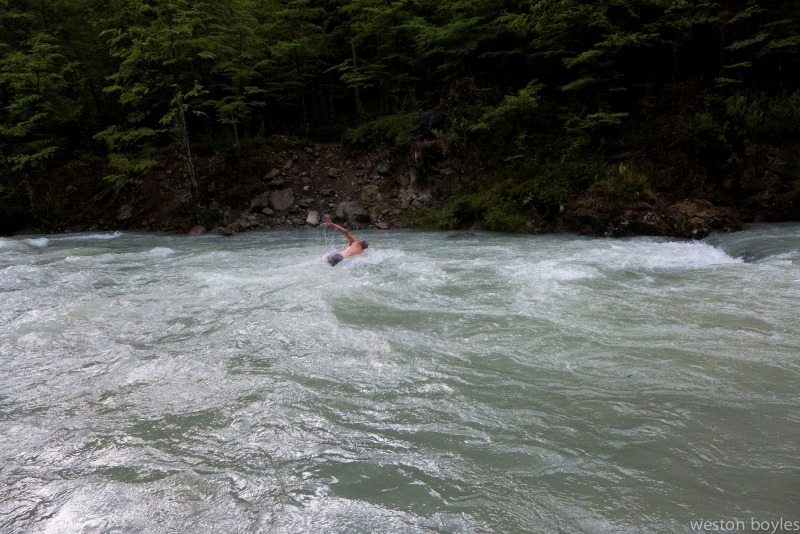 Rick makes the swim across the glacial water at the first and hardest ford. Photo: Weston Boyles 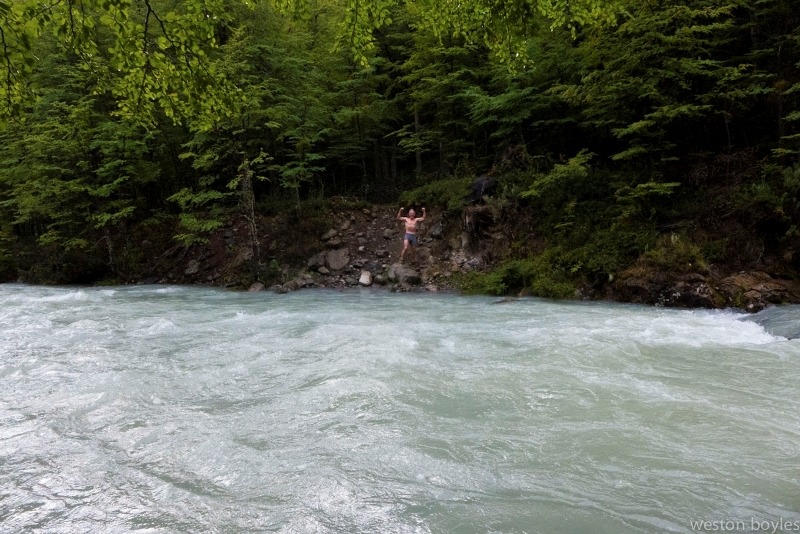 When Rick reached the opposite bank he was stoked he still had it in him at age 65. The other two tossed him a line, ferried their packs across and then made the same swim. Photo: Weston Boyles 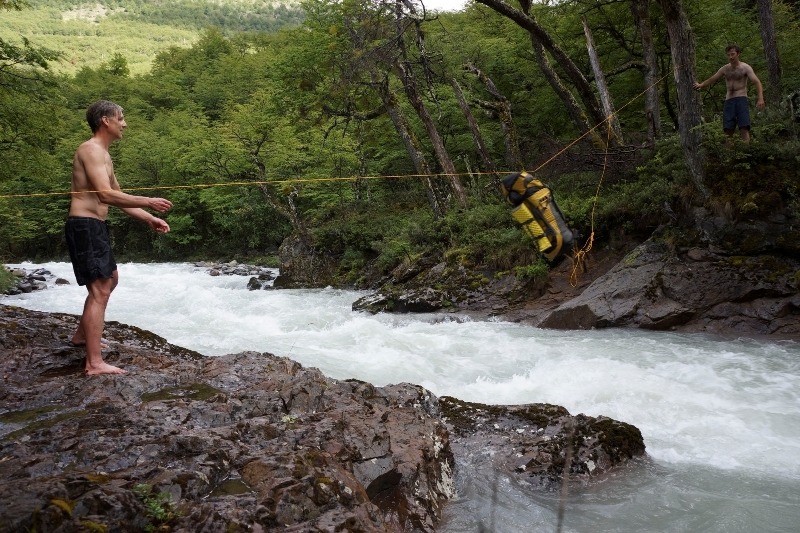 Ferrying the packs across the Aviles Sur after swimming across on the morning of day two. Photo: Rick Ridgeway 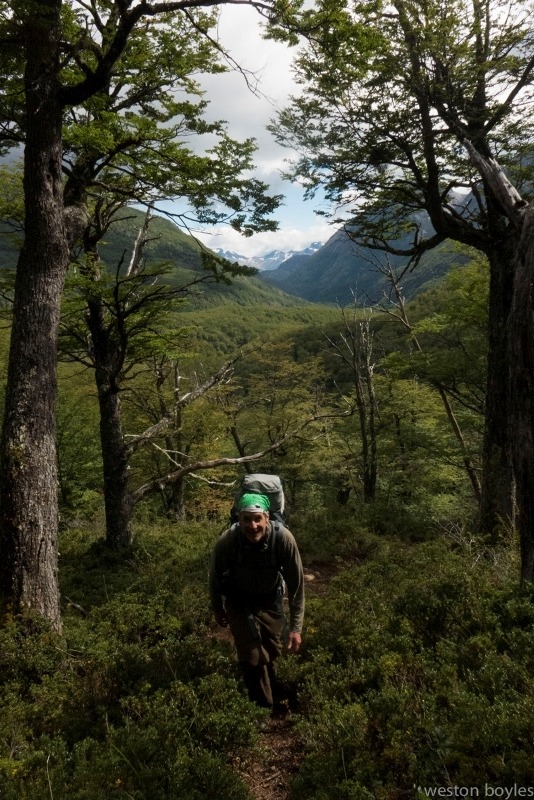 Jib Ellison on day two following a trail made by guachos herding cattle back and forth to summer pastures. Photo: Weston Boyles 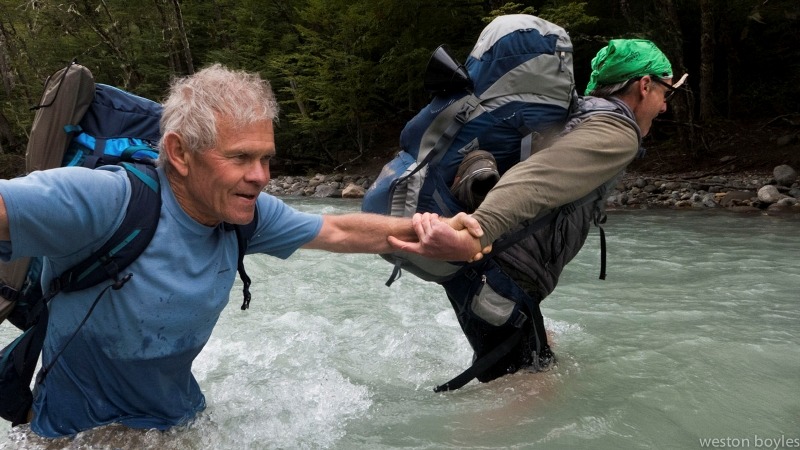 River ferry number two. This time the boys wore their packs and put the old guy in the middle. Photo: Weston Boyles 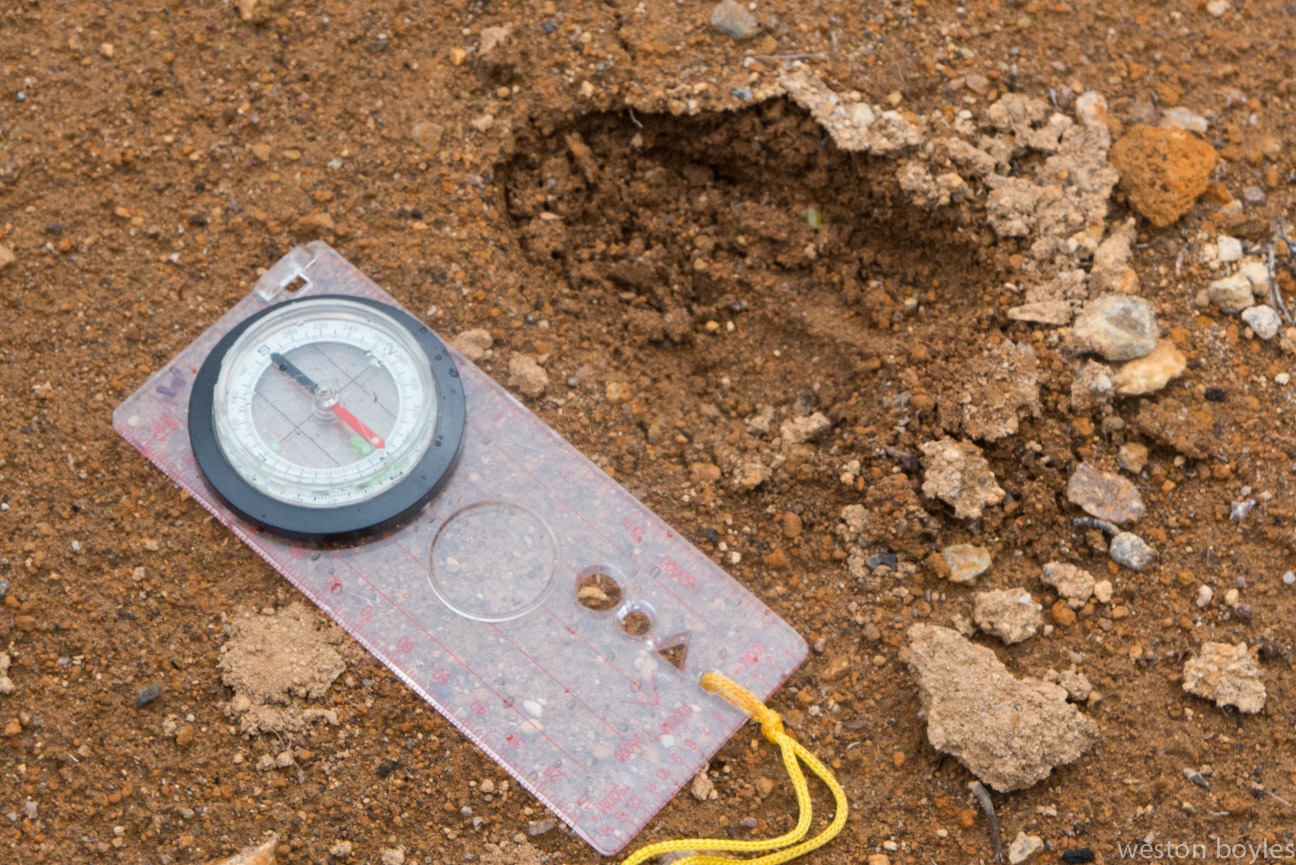 On day two, in the most secluded part of our route, we encountered the fresh print of a huemul deer. The wildlife officials at Patagonia National Park were very excited to learn this critically endangered, red-listed species was in this area. Photo: Weston Boyles 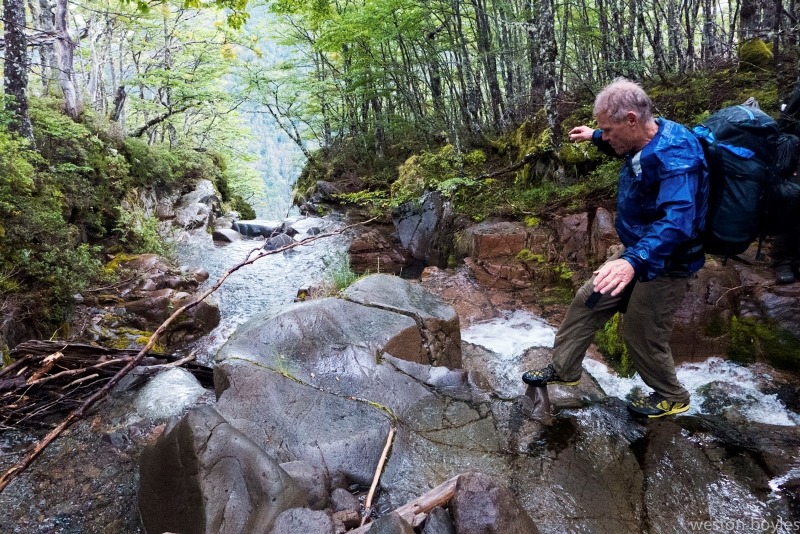 Day two, Rick crosses one of the (very) frequent side creeks that flow into the Aviles Norte River. Photo: Weston Boyles 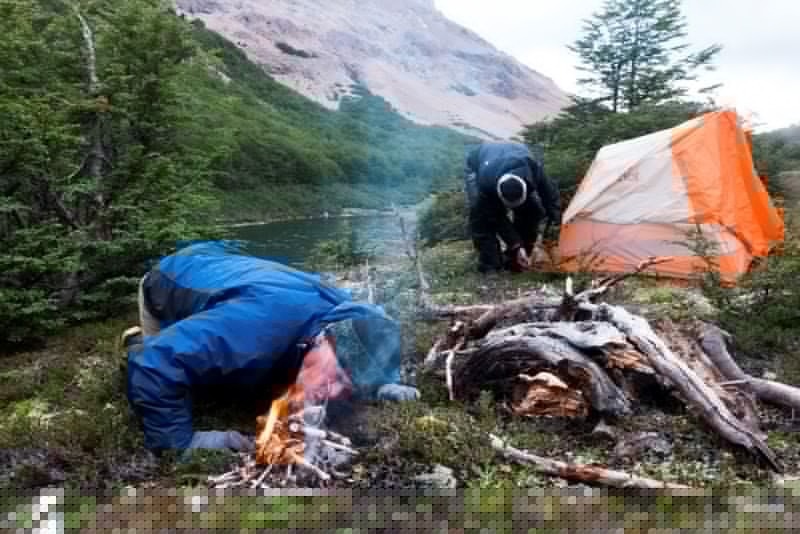 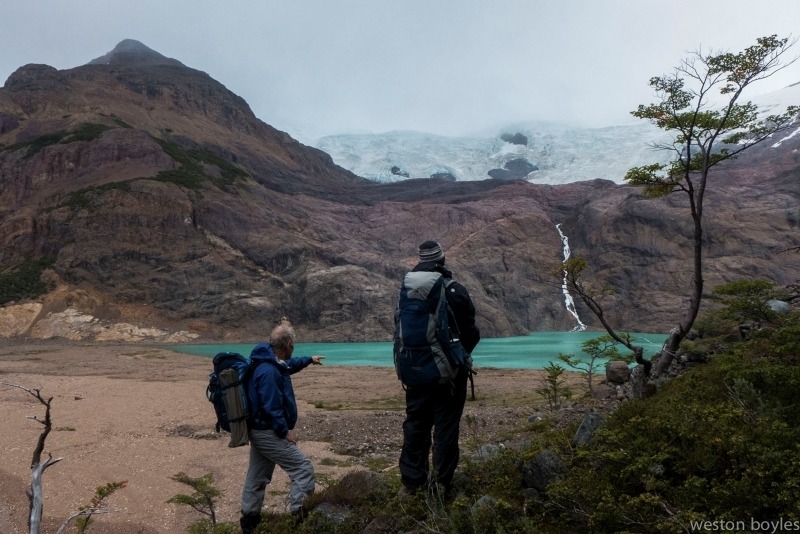 On the morning of day three the boys dropped into a new drainage lined with hanging glaciers. Photo: Weston Boyles 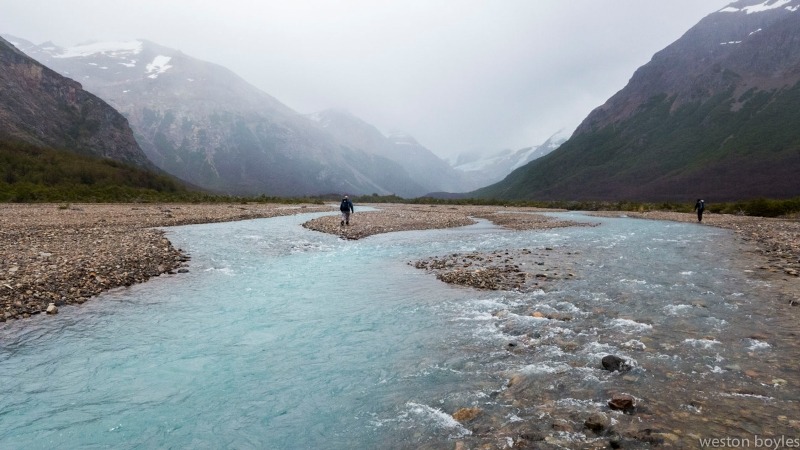 Rick and Jib on day three in the Furioso Valley. Their route has now joined the one that the Patagonia trail running team followed the month before (see Mile for Mile). Photo: Weston Boyles 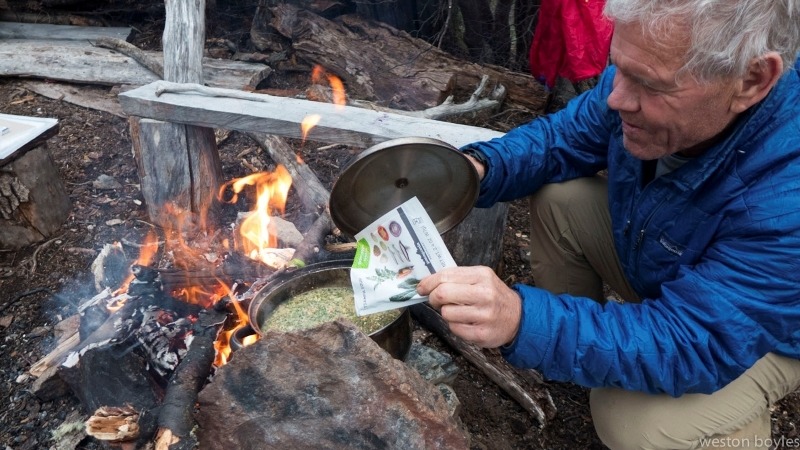 Rick makes dinner with the new Patagonia Provisions Tsampa Soup although for him it was “not so new” because he’s been eating tsampa with Yvon on their climbing trips going back nearly 40 years. Photo: Weston Boyles 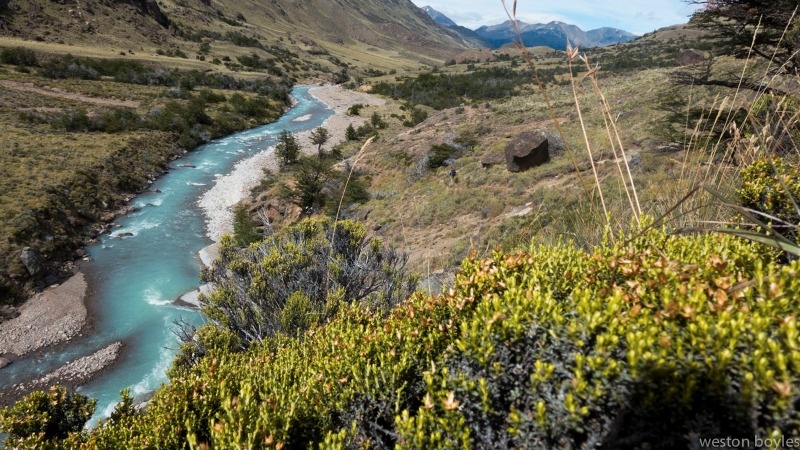 Day four, descending the Aviles Sur river that flows into the Rio Chacabuco. The team is now on the trail system already built in the new national park. Photo: Weston Boyles 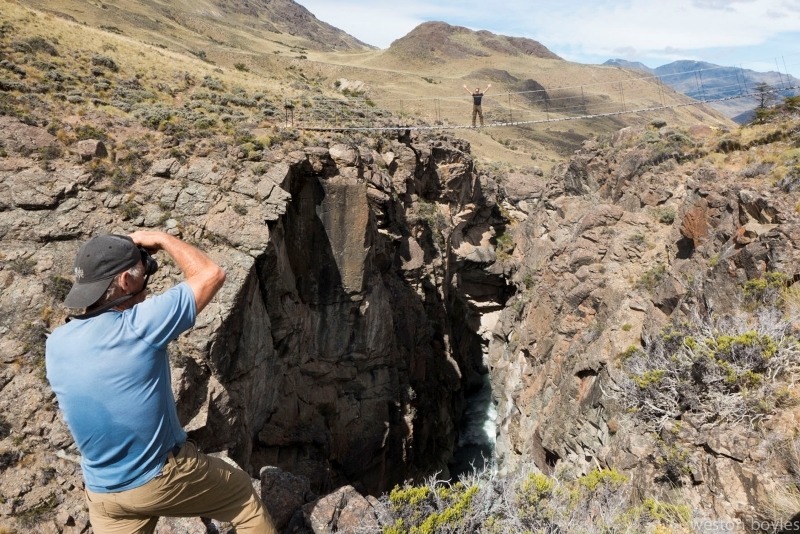 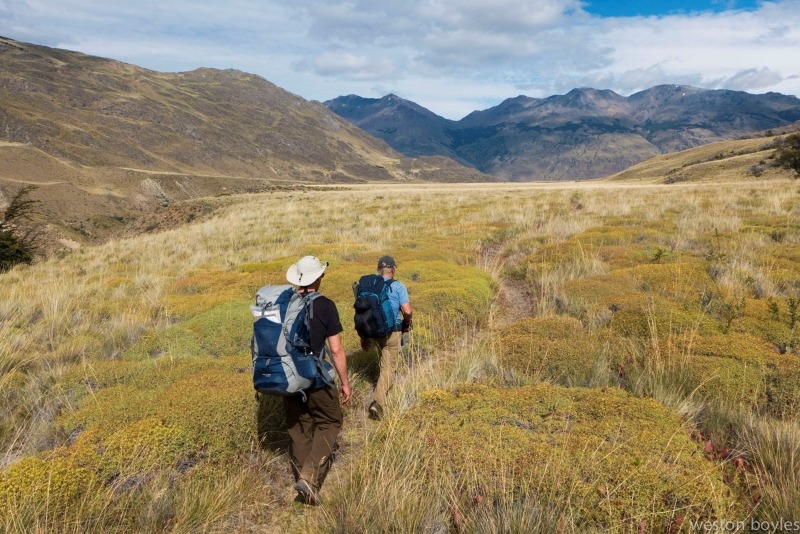 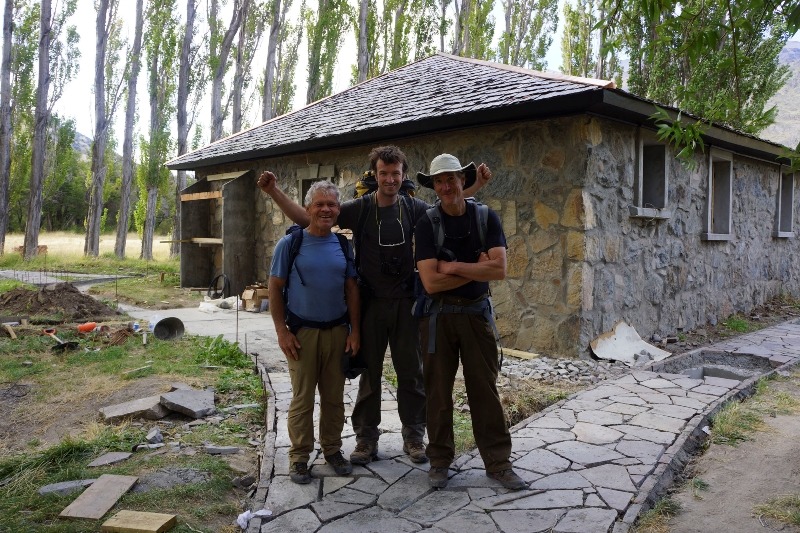 Rick (left), Weston (center) and Jib (right) at the end of the hike in front of a newly renovated hostel and campground that will someday make a welcome ending to the hiking trail that the team pioneered. Photo: a local gaucho with Rick’s camera

Donate to Conservacion Patagonica, and help build 50 miles of trail. Patagonia will match your donation, mile for mile through December 31, 2015.

For more on the original Mile for Mile trail run by Krissy Moehl, Luke Nelson and Jeff Browning, check out our previous posts.

Rick Ridgeway is the VP of Environmental Affairs at Patagonia and the author of six books. His passion for mountaineering and exploration have taken him around the world, including the summit of K2 where he was part of the first American team to climb the peak in 1978.