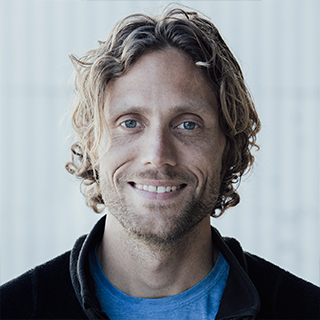 “Two of the philosophies that ground Patagonia are “not be bound by convention” and “live an examined life.” Since I started working here, these two ideas have independently redirected parts of my psyche and lifestyle, and recently have become two of the core ideals that frame, what I think, is a full life.”

Passionate about: Inspiring others to develop a love of nature and do what they can to protect it—whether it be taking people out climbing for the first time to gain a sense of awe for mountain landscapes or working with other businesses to brainstorm how we can radically change the way we do business to reduce our footprint.

Outside interests: Though I live on the coast, I still consider myself to be a mountain person. Evenings, my friends and I often shoot up to the foothills to trail run or climb a crag, and on weekends my fiancé and I head to the Sierras to explore, climb and ski. I have taken up surfing during the week though, which is a great way to break up the day and engage with Mother Nature (our founder wrote about that idea too so I’d hate to be delinquent). Other than that, I am trying my hand at gardening and growing my own food and am an aspiring sous chef to my better half’s culinary skills.

Path to Patagonia: Sort of like a winding mountain road. I started as a business, Spanish and secondary education major in undergrad, then worked in more social work settings for the next few years—mentoring youth, guiding kids on climbing and backpacking expeditions, and helping to run a homeless shelter. Knowing that environmental protection was my real drive, I went back to school (a few of them actually) and studied international relations with a focus on environmental policy and international development. I worked for the sustainability office at the University of Chicago for a bit then moved to Boulder, where I worked for an international environmental organization that focused on environmental justice issues in the global south. In 2013 I took a job with the environmental grants team here at Patagonia and now have moved into a new role focusing on reducing the impacts of Patagonia’s own footprint.

Favorite Patagonia product: Houdini® Jacket. I wear this thing all the time. I clip it on my harness for every alpine climb, throw it on for cooler trail runs or when there is a chance of light precip, and wear it to commute to the office in the morning.

Has Patagonia changed you in any way?
I feel that many of the ideas that typically define success today detract from maintaining healthy relationships with each other and the natural world. Buying a huge house, watching Netflix on a big screen every night of the week, convenience as the modus operandi for consumption and disposal of stuff have all led us to a way of life that, while considered a societal norm, isn’t sustainable. Seeing folks like Yvon, who still drives an old Subaru and has holes in many of his shirts; finding friends who go camping in the middle of the week instead of watching television; moving into a small home, causing me to give over half my possessions away; seeing co-workers who bring their own Tupperware to a restaurant to forego Styrofoam “to-go” containers, are all small ways that I have seen these ideals be lived out. Seeing people think critically and creatively about what it means to live more simply and in tune with nature and each other is aspirational. I still have a long way to go, but I’d like to think the seeds planted so far will continue to grow into living a more robust life.

What is your favorite life memory?
Not soon after I started at Patagonia, I headed out on a climbing trip to Tuolumne with a co-worker and unexpectedly met up with another group of climbers for the weekend. One of them happened to work at Patagonia, as well. (I was still new and didn’t know many people). Two pitches up on Cathedral Peak, I asked her to climb a high alpine peak with me a few weeks later and she agreed to go. We epic-ed beyond belief on that trip. I didn’t know if she’d ever want to talk to me again. Thankfully, folks around here seem to have that extra sense of humor (maybe desire?) to embark on such journeys. After two years of dating, we recently got engaged. She still doesn’t let me forget about that trip though.

What is the favorite part about your workday?
Every morning, the Patagonia Café is a hub of energy—people arriving after a surf to get a hearty breakfast, parents bringing their kids in for daycare, others queuing up to pour their first cup of coffee to kickstart their morning. You hear conversations about someone’s climbing trip over the weekend, their child’s third birthday party, troubles growing tomatoes in the summer heat or how best to put shelves in a Sprinter van. Add on top of that the food prepped by the kitchen being the best in Ventura (egg sandwich day is my favorite), breakfast time sets the tone for the day.