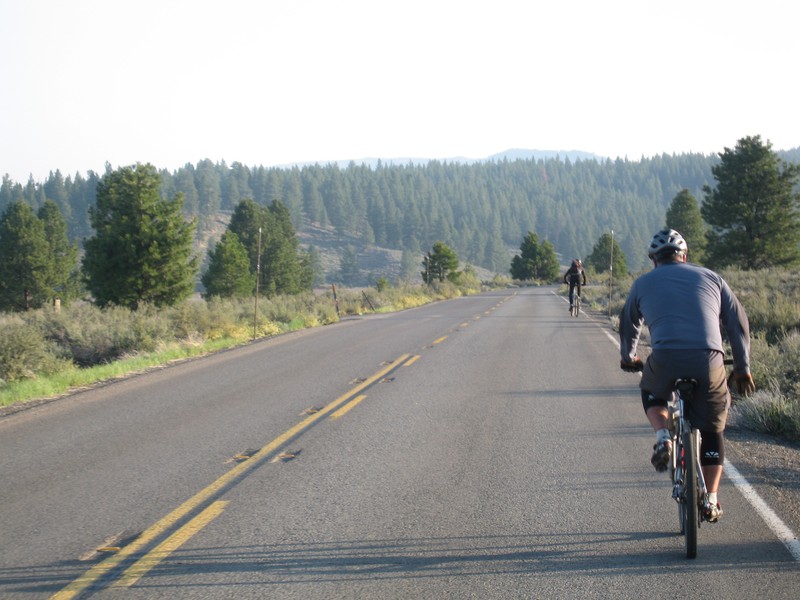 An impressive-enough commute by car, 2 states and 3 counties are exactly what some of the folks who work in our Reno Distribution Center pedaled through to get to work Thursday morning.

Undaunted by distance and mountain passes, Nate Hanson (Pro Sales), Tim Kipp (Customer Service), Anne Cahill (Account Manager), Rob Flesher (Call Center Mgr.) and Mark Blume (Paddling Line Director) have stepped up to offer sound motivation to all those convinced they live too far from work to make biking possible. Their 30-mile one-way ride took them from California to Nevada over paved backroads, gravel by-ways, through dense pine forests, and over one mountain pass. Imagine the surprise when they ran into another crew with the same travel plan . . .

Right about the time their route entered the quiet folds of the Tahoe National Forest, our friends happened into another motivated crew: Jan and Caroline of Ropeworks. Telling proof that the Bike to Work vibe is spreading.

Much of the resistance encountered toward inclusion of bicycles in Alternative Transportation  stems from the  belief that people simply aren’t motivated to ride their bikes. Please take a moment to submit your comments in favor of the Bicycle Commuter Act.  Let Washington know how motivated you really are!

[Rob Flesher’s an accountant by training, but you almost can’t tell. Thanks for the photos, Rob.]