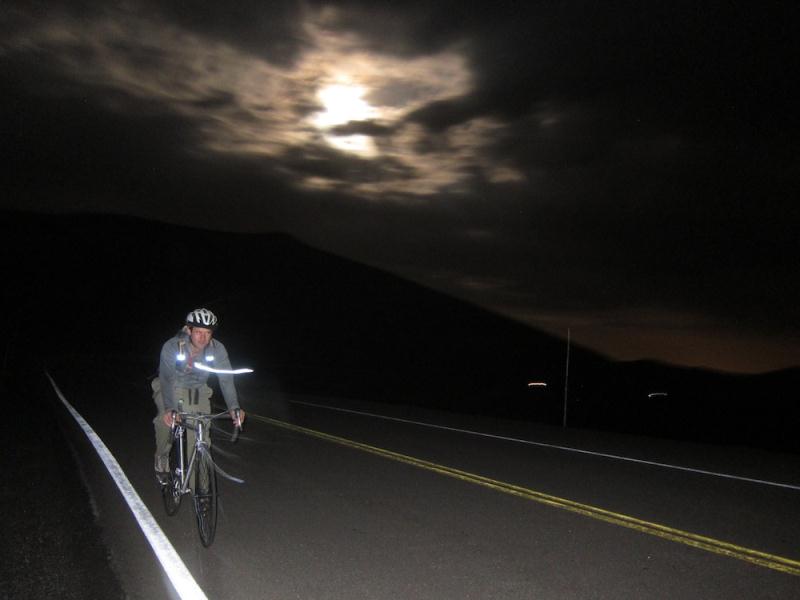 Shadows crept across the pavement, clouds reflected stars and headlamps crawled slowly up the road, bicycles under a full moon at 12,000 feet.

A month later – just last week, in fact – I parked my beater Honda and stood on the sidewalk outside of Supercuts, on my way home from Patagonia meetings in Ventura, pondering the merits of going out on top. I’d spent five days in a bright red Camaro. Such sweet perfection.

Our Estes crew had gone for a full-moon bike ride up Trail Ridge Road, in Rocky Mountain National Park – a friendly, fun ride. In it for the experience, you know. We left the parking lot, and Scotty D, Michael B, and me went out front, maybe-kinda fast. Freakin’ dudes. Can’t you guys do anything without it being a race?

I paced in front of Supercuts, occasionally pausing to study my reflection in the glass and envision looking like something other than Joe Dirt – looking like an ordinary, normal person. No hopes, no dreams. No Camaro, no mullet. Then I walked in, took a deep breath and spoke to the lady at the counter.

Twenty mellow minutes up Trail Ridge, as we casually crested into a short downhill (of course a leisurely ride can be a leisurely ride, not a race) and moonlight glistened off the clouds, illuminating the road in a sort of eerie and beautiful twilight, a blur whizzed past me. A sportscaster-like voice sounded inside my head: Barnthouse breaks away! Then another blur and another sportscaster: DeCapio gives chase! Then my voice: Dammit, you guys. Sportscaster again: And Cordes takes off in a full sprint! Freakin’ dudes. The wind whipped my mullet against my face and my lungs and legs seared. 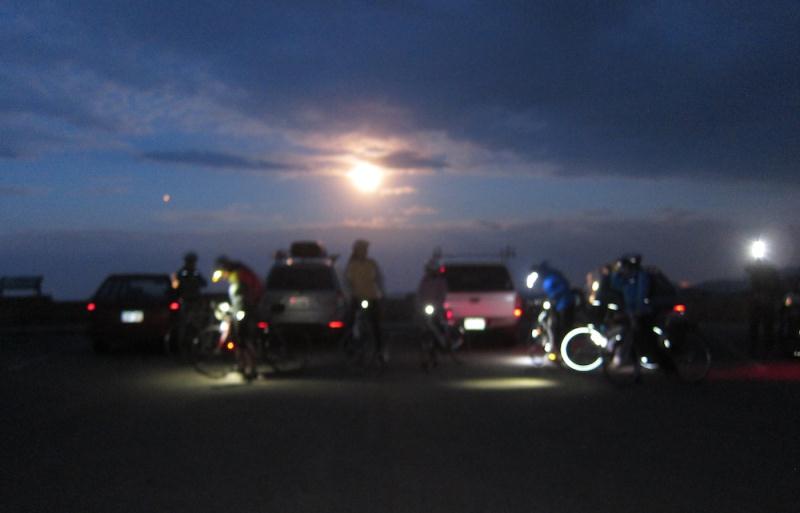 The crew readying for the full-moon ride. Photo: Kelly Cordes

Disclosure time: No doubt I’ve had Average Joe fear. Otherwise known as: pathetic and sad. Not saying that about AJ, but saying that about me for having that fear. In lieu of anything else, it’s kinda fun being different in stupid little ways, especially with something as stupid as a mullet, which, in my mind, made it all the better and kept me thinking – especially the more people told me to cut it (even one of the company managers publicly busted me at the packed-house Patagonia global sales meeting: “Kelly, you’ve been rocking that mullet way too confidently for way too long”) – kept me thinking, “I like it, and if people don’t, that’s even better. Screw ’em.”

The mullet reeks of midlife crisis, doesn’t it? Or juvenile crisis. Hell, maybe I should have kept the Camaro. Wait, I never did explain that, did I? So, I flew to California for Patagonia meetings, and at the rental car counter, the guy goes, “Sorry Mr. Cordes, we’re out of economy cars – smallest thing we’ve got is a Camaro. Will that work for you?”

“That’s the only thing that’ll work for me.” 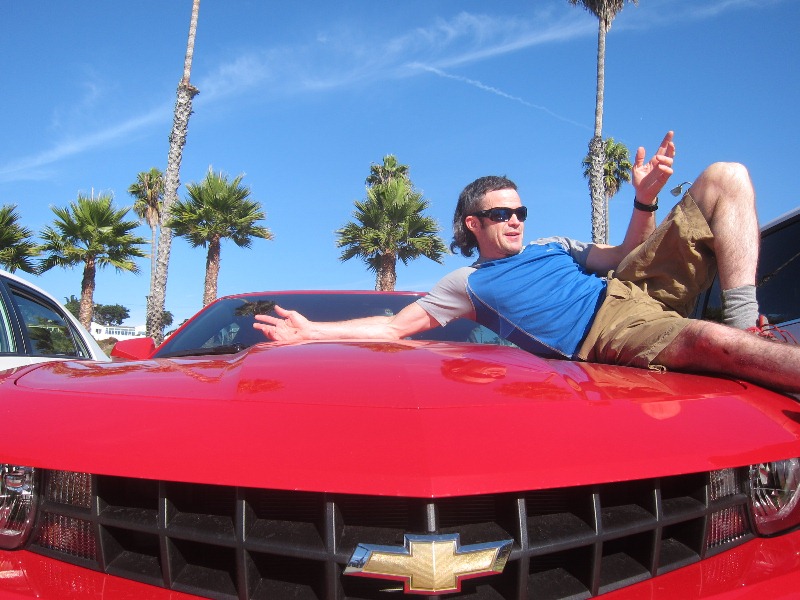 Before: Goin’ out on top. Or something like that. Photo: Brittany Griffith

Supercuts: “My name is Kelly. I’ve had this mullet for two years. I think it’s time to go.” The haircutter lady spoke kindly, reassuringly – suspiciously like she was talking to a juvenile – and told me it’s OK, it really will look better. I asked her to collect my mullet trimmings in a ziplock, in case I wanted to glue them back on. (She said no.) Then, midway in, the owner – an older dude, perfect hair, nicely dressed, stylish guy – cruised over and sat beside me. “I saw you deep in contemplation out on the sidewalk, brother. Just wanted to let you know you’re doing the right thing. I, too, once had a mullet. I understand. And you did the right thing. It’s OK.”

I’d floored it down the Ventura Freeway, windows open, mullet flapping, Whitesnake blasting, with a revelatory thought: Maybe I should buy a Camaro. Good thing is, the Camaro probably costs $30,000 – astronomically more than I’ve ever had in my bank account at any time in my whole entire life. The haircut cost me 15 bucks.

My Supercuts family made me feel a bit like someone coming out of the closet and being reassured that it’s really going to be alright, it’s who you are inside that matters. Or maybe the narrator in Fight Club in his support group meetings. Then again, he was a faker, a tourist. Until he started fighting. And I really did love my mullet, but everything dies, it’s a fight to fully live, to change, to grow, and – awww, nevermind. 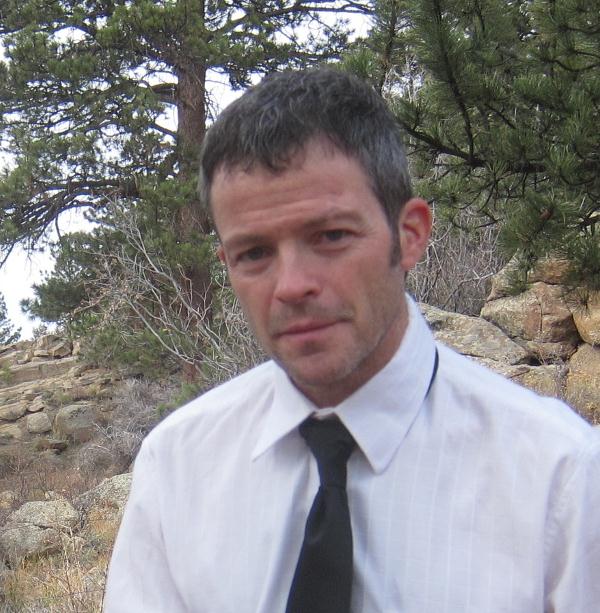 On our way down Trail Ridge Road in the dark, I tucked behind my handlebars and headlight beam to keep pace with Scotty (who never turned on his headlight, even on the downhill…guess he liked the challenge) and Michael. My gaze shifted from the road to my navel and I thought, those guys don’t have a mullet and they seem OK. Shadows of trees and the roadway edges flashed past under the moon and stars in a time-stand-still blur, and the computer on Michael’s bike hit 48 mph. Pretty sweet. Or so I thought – ’till a month later when I cracked a hundred in the Camaro.

ADDENDUM (Nov. 5): After some great climbing in the South Platte the other day, we were enjoying an oat soda on the tailgate of my buddy’s truck when, no shit, a convertible Camaro drove past. Dude pulled in just to say hey. No reason, never met him. A pining rose in my heart and I asked, “Can I sit in it? J-just for a second?” Me and the ‘Maro. Moth to flame. Mullet, no-mullet, we
were meant to be.