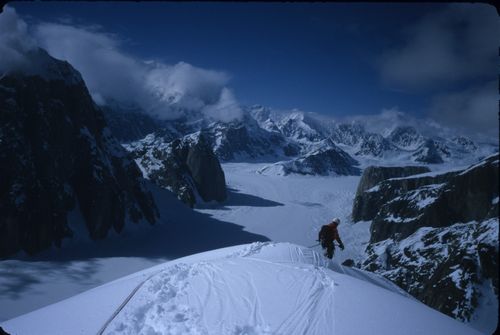 Dude at curbside didn’t budge from his chair. Gave me a bored look.

He sighed. “How much they weigh?”

“You sure? Because I’m allowed three 70-pound bags and I only have two,” I said, with a hint of smug pride at coming in light for a climbing trip – a lifetime first. His boredom shifted to confusion, like he knew what this meant but it didn’t jibe with what stood before him: a scarred and scraggly dude in a baggy T-shirt who limped from the car in a bad mullet. Side note: in a case of mistaken brilliance, I gave my mullet a homemade trim before leaving for the airport. I botched it. Bad. It now looks terrible.

Dude stood up. Looked at his printout.

“I’d be happy to help you with that, Mr. Cordes! Going to Anchorage, correct?”

Yeah, that’s just how we roll as Patagonia alpine ambassadors. Ahem. Truth: some lucky frequent flier snafu got me a first-class ticket (with “Premier Status,” whatever that is, and a massive free baggage allowance) for the same miles as a regular ticket. Hell, normally I can’t get a freaking regular FF ticket from Denver to Los Angeles without getting routed through Cleveland, the rotten bastards. But maybe everything comes around once in a while.

Because I really don’t give a shit about first class. And the way things work is a little “off.” Sure, I like to be treated well. But to have your ass kissed because of the presumption (incorrectly in my snafu-benefitting case) that you have money strikes me as gross. I even got to speed though security because my ticket said “Premier,” which is waaay messed up. TSA shouldn’t have anything to do with the business preferences of the airlines. (“The terrorists will never win!”) Indeed I’m a free-drink-swillin’ hypocrite, and soon I’ll be back to sitting amid the plebeian riff raff. 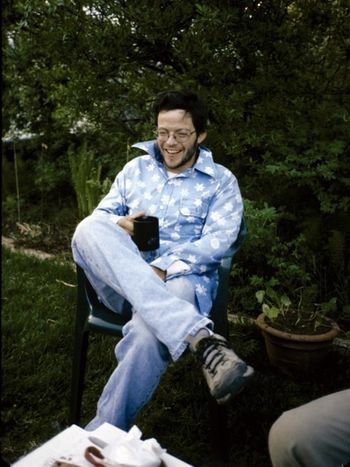 Before Premier: Kelly in Talkeetna, back in the day. Photo: Cordes collection

That’s fine. Because now I’m in Alaska, and it’s been too long (much like the preceding introduction to this blog post). Last time I was here was 2004, with my dear friend Jonny Copp. Damn, time flies. It gets away from you if you aren’t careful. I love Alaska, I’ve learned so much here, learned to climb big mountains, mostly through great climbing partners like Jonny and Scott DeCapio. Learned to deal with serious alpine, forged the greatest memories and met the greatest people, seen the most incredible landscape. Learned about myself. I even remember scraping together the airfares, moving out of apartments, living in shacks, going in debt, and every bit was worth it. Worth infinitely more than any first-class-Premier ticket (even if you had to pay for it). 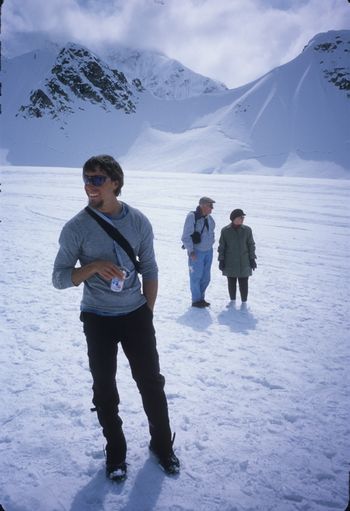 Jonny Copp and some flightseers on the glacier in Alaska. Photo: Kelly Cordes
Then, a few years of traveling to other places – incredible as well – and a few losses, a few injuries, and the Alaskan pilgrimage – seemingly requisite to North American alpinists, one I’d done nine times myself (ten now) – resonates in my brain. It makes me nostalgic.So I’m here, thinking about Jonny and those old memories, grateful for these memories, these gorgeous mountains, feeling some odd sense of kinship and pride toward the younger climbers I see in Talkeetna, cutting their teeth here as well, and thinking about time and how everything changes but nothing really does.

I’m just here for a short trip in the mountains. No big plans. No real objectives. Maybe some climbing. Hope so. But mostly, I’m just glad to be back. 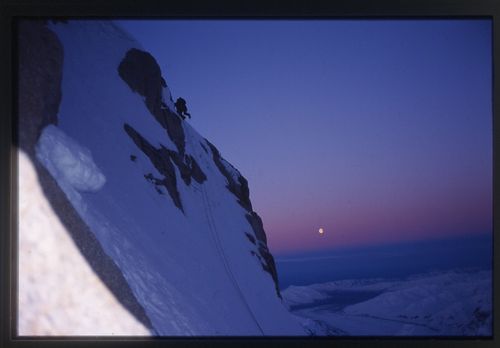 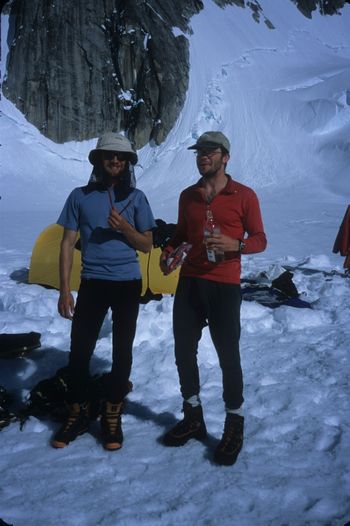 Kelly will be off the grid and out of touch for a while. We’re already looking forward to his next post in early July.