In early 2009, Kelly took a trip to Northern Chilean Patagonia with climbing legend Jim Donini. Here, Kelly revisits his notes from an adventure with Jim. This is the second in a series of short posts from their trip. Read the first here. 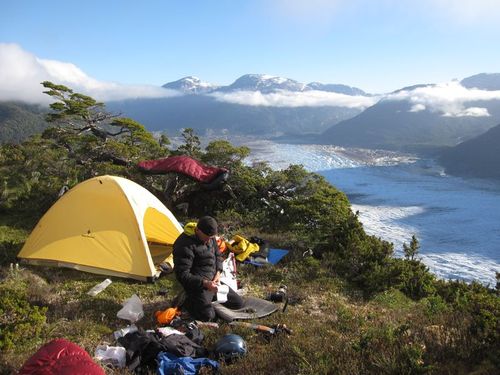 Just before dark, utterly worked at the decidedly unimpressive altitude of 2,350′, we found a flat mini-meadow and bivied. In the morning, within an hour of moderate bushwhacking we reached what Jim calls the “Sound of Music Meadows.” Indescribably beautiful, rolling meadows with peaks and ponds in every direction, not a road in sight, glaciers winding in valleys below and icefalls tumbling from glacial plateaus. Another smaller meadow lies above, then a scrappy rock band, and then long, easy snow climbing culminating in a crevasse-riddled climb up an unnamed ca 6,200′ peak that’s the key to reaching the line that Jim won’t shut up about seeing from his porch. 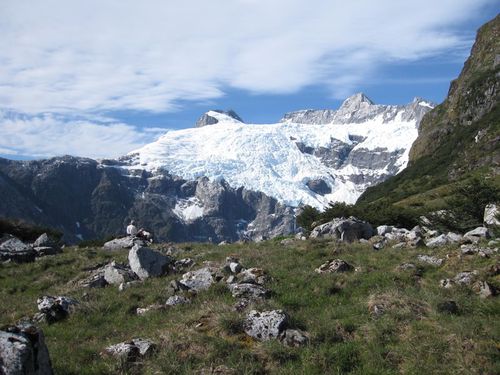 The “Sound of Music Meadows.” Photo: Kelly CordesWe cross the meadows, kick steps up a snowfield, and climb the scrappy rock band unroped, stopping to pre-set two rappel anchors for our descent. “I’ve done a lot of rappels in my life, and I’m still here,” Jim says as we turn one into a three-piece anchor. “I don’t worry about leaving gear. Ya know, you come down cold and tired and with heavy loads, maybe your judgment is a little impaired, and you’re glad to have these anchors. Getting up is optional. Getting down is mandatory.” 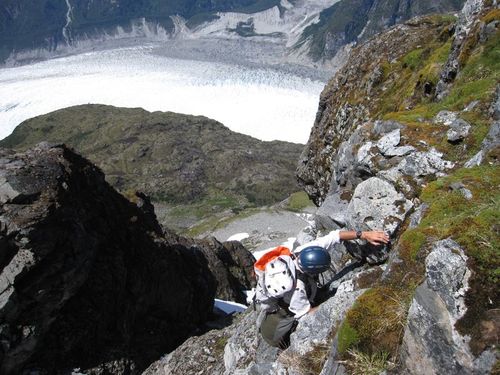 More steps up a long snowfield and we stand atop a small peak, about 4,850′, and get our first close-up view of that gorgeous skyline seen from Jim’s porch. It looks terrifying. Huge seracs lace the face, icefalls crash down below, and from here we’d have to climb down, then up and over the ca 6,200′ peak (the one with lots of crevasses, but easy-looking climbing) and descend the other side just to reach San Valentin. The side we’d descend is out of sight but if it’s rounded and easy like the other sides, at least we could reach the base of the route. If not, well, I guess we couldn’t. From that angle we’d have a better view, to see if we could thread a safe passage up the face. We think there’s a line, but from here I can’t tell and my mind retreats, like it always does early in a trip when I feel so small. The face must be bigger than we thought, since we’d go down at least a thousand feet from the summit of the ca 6,200′ peak before starting up San Valentin. The face must be at least 7,000 vertical feet. The top is the obvious crux, and has steep, ominous black rock laced with streaks of snow and ice. It looks hard. 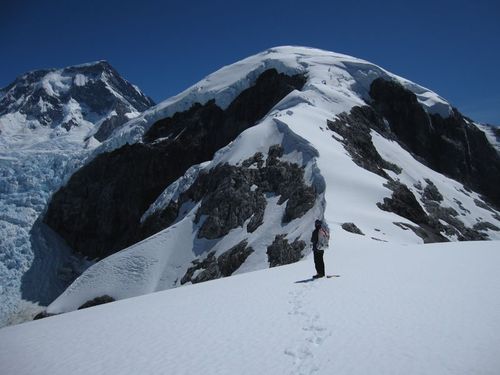 The ca 6,200′ sub-peak above Jim, and the north face of San Valentin’s north peak behind and left.

We stand 20 feet back from the lip of the peak, in case it’s a cornice – surrounding peaks have cornices facing this way. Our straight-on view of the face makes it look steeper than it is, knowledge that eases the familiar doubt creeping into me. “I think that serac on the right is farther away than it looks, and isn’t threatening where we’d come into the face,” Jim says. “And ya know, that bottom part is a lot lower-angle than it looks from here, because we’re looking at it head on.” I know, I know … yet still I wonder if he’s at all intimidated. Do people like him get scared? Before we head down he says, “It’ll be good to see it in profile again back at the house, where it doesn’t look so f***ing terrifying.”

My mind drifts from the scary face and expands to my surroundings. Besides us, surely no humans have ever had this specific view – only the condors. Wow, I think, how cool. But it also makes me a little sad. 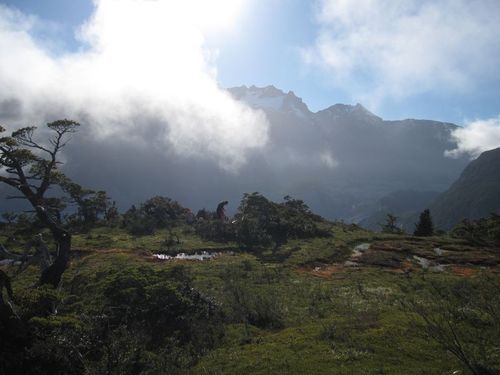 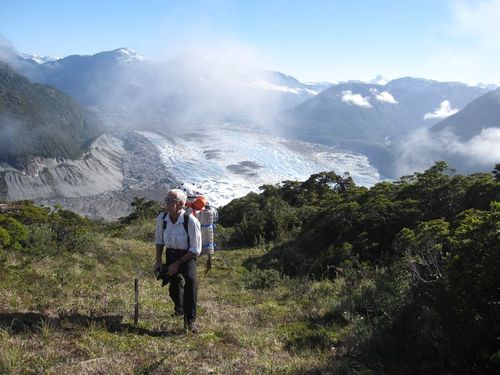 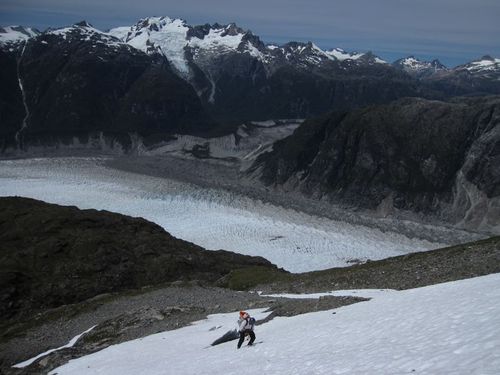 Up the snowfield to get a view of San Valentin. Photo: Kelly Cordes 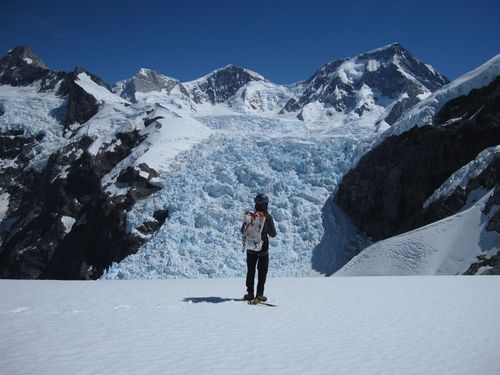 Stay tuned for Part Three. Until then, have a great weekend everybody.