It’s time for another reader-submitted Backyard Adventure. This one comes courtesy of longtime Cleanest Line commenter CM, otherwise known as Craig Metzger from Southern California. CM’s story first appeared on his blog Get Outside More. 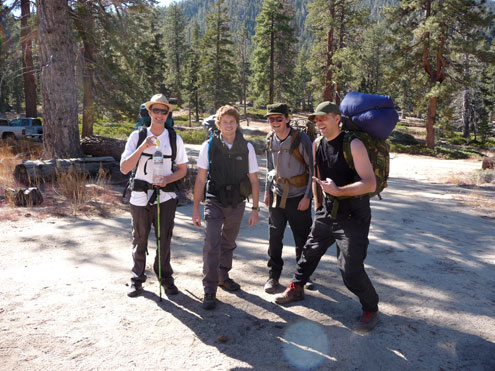 I’d been planning a backpack trip with friends for some time. The plan was to hike in, camp and then hike out in the amazing San Gorgonio Wilderness (SGW). Finally everyone’s schedules aligned and dates were picked for the adventure.

Around this time I applied for the permits and began to watch the weather like a hawk. I knew that this time of year in the SGW the weather could turn foul. The final week was upon us before the trip and the weather all of sudden was showing 20% chance of snow. "20%," I thought to myself, seemed pretty low and the way weather works in California our odds were good that it wouldn’t snow. On the day before we left I visited the weather site and now there were chances of high winds and still a 20% chance of snow. I began to think about calling the trip off but after discussing it with my fellow tripmates we felt our odds were good but decided to prepare for the worse. I’m glad we did. 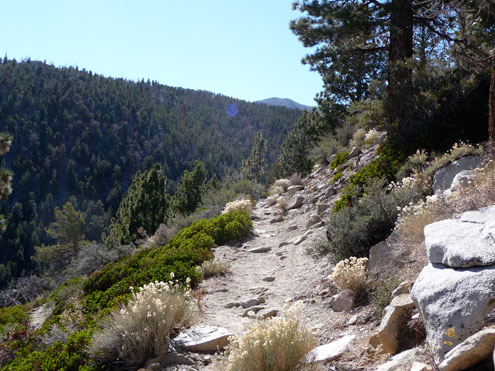 The morning of our trip we loaded the car and headed for the hills. After miles on paved roads we began our journey on 7 miles of dirt road to the Fish Creek trailhead. When we arrived the temps were in the 50s, perfect hiking weather we thought. We loaded our 30lb packs on our backs and began the climb. The trails were amazing with their great views and fall colors in full bloom. 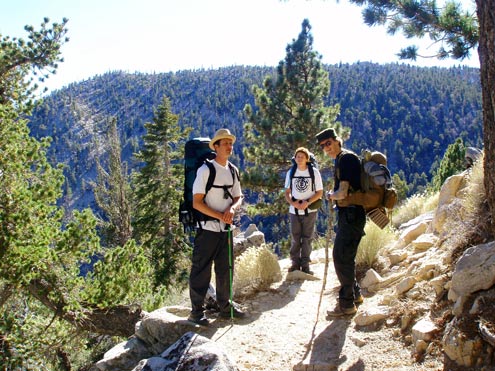 The sky was clear and the sun gave us just the right amount warmth to make the trip comfortable. We finally made it to our midway point which was Fish Creek Saddle. From this place we’d begin our descent, losing 1,000 feet in a mile. In translation: the descent was steep. We scrambled down the dried streambed and began looking for a water source known as Lodge Pole Springs. Here is where we’d load up on water for camp. After a little searching we found the spring and loaded up. We finally came upon our destination and set up camp. 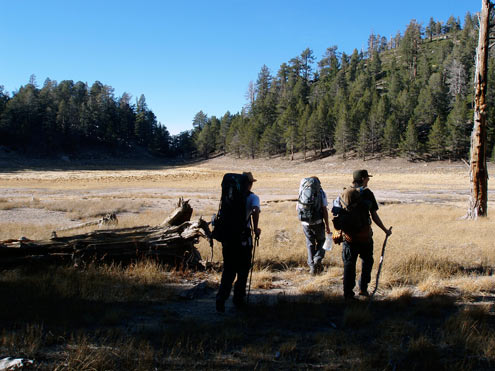 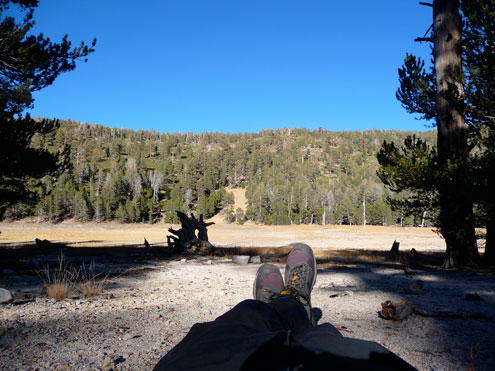 As the sun dipped behind the mountains the temperature dropped drastically. We all began to put on our extra layers as fast as we could get them out of the packs. Around this time two rangers came through our camp coming from a observation mission. We chatted with the rangers and discussed the weather report that I read about. They had heard the same thing and told us that the temps were hitting the mid 20s. As they left, we wished there were fires allowed but the SGW is a no-fire zone. Instead of a fire, we boiled water and made some pine needle tea to keep us warm.

The sun finally disappeared and we headed into the Dry Lake-bed to look at the stars. We happened to see a shooting star that appeared to skip across the sky like a rock skipping on the top of a lake. At this time, Tom noticed a ring around the moon. He then told us that the ring around the moon is a sign of a coming storm. I then commented there was only a 20% chance.

The temperature got colder so we decided to call it a night and hunker down. By the time we hit our tents the wind began to pick up and disturb the silence. Around midnight, the wind was thrashing my tent and the loud howling became a bit unnerving. It was like someone was standing above my head with a nylon tarp and thrashing it about. Luckily my tent was well grounded with stakes and rocks. It was almost impossible to sleep.

Then all of a sudden the moon was blacked out. The sky turned completely black and with the final rushing of wind through the trees snow began to fall. The 20% chance was now a 100%. The snow was being picked up tossed around in the violent wind. My rain fly was stretched and pulled, and allowed some snow to be blown in, but held it’s position. Alex, who was in the tent next to me had his rain fly come undone and he had to go out in the storm and fix it. The winds were blowing around 30-60 mph and the snow was coming down. Dan had to brace himself in his tent as he forgot to bring stakes and the makeshift rocks holding the corners had come loose. He lay from corner to corner to keep it in place. The night had become a test of will and survival. Our tents were meant for three seasons and we were in the one season the tents were not designed for.

The air got colder and I looked at my temp gauge to see that it was in the low 20s. I wrapped my feet in my storm shell and completely sealed my head in my sleeping bag. Everyone was stuffing their bags with whatever they could find in their pack. The snow would turn to rain occasionally adding another level of danger as the night went on. I was watching the clock religiously hoping for morning to break. When the sun tried to break through the storm was still in full effect. 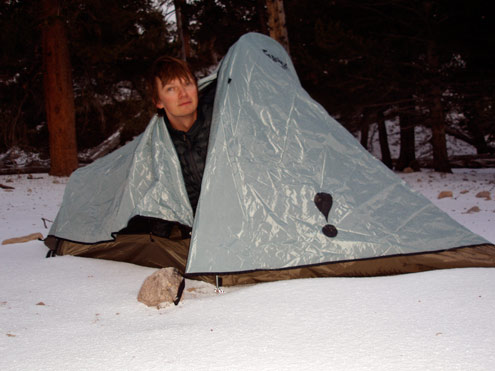 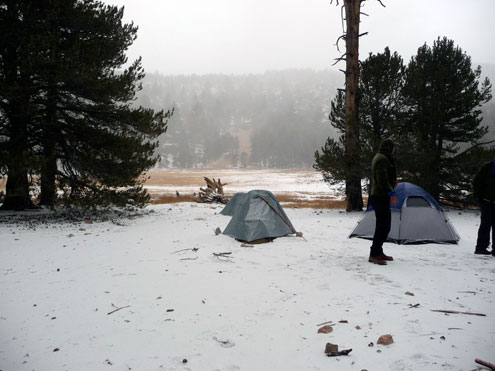 We climbed out of our tents and decided to figure out a plan. Do we hunker down and wait for the storm to break or do we climb out? 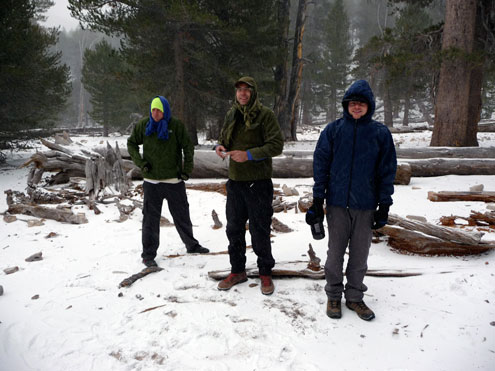 We had enough food but our water was getting low. We then decided to make a run for it once there was a slight break. After a few cups of coffee and breakfast the break came and it was only a small break. We packed our tents and began the journey out. 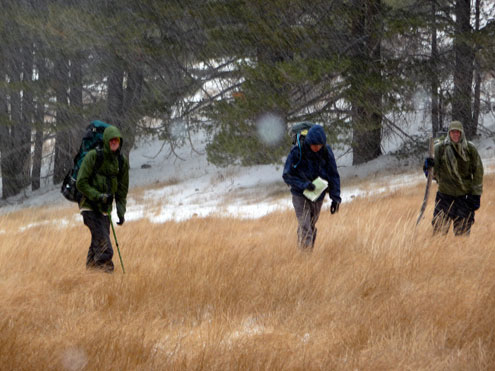 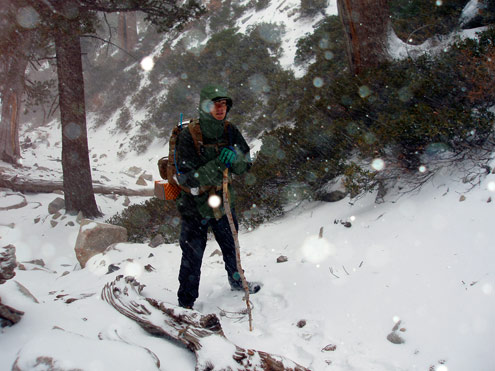 The first part out was that 1,000-feet-of-gain-in-one-mile section, this time during a snow storm. The hike out was slow going and we needed to find water. It was hard to find the stream at first cause most of the ground was covered in snow and we worried that the spring would be frozen. As we crisscrossed around the trail we found the source and the flow was still good. 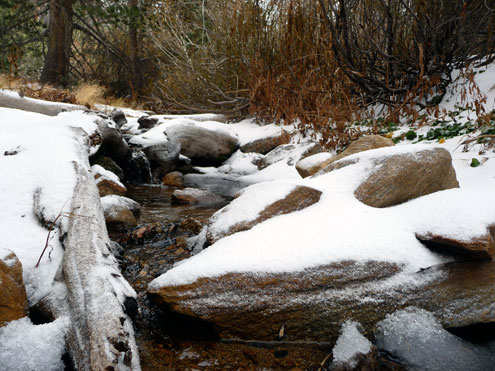 After we filtered the water we continued our ascent. When we finally made our way to the top we all let out a giant cheer. 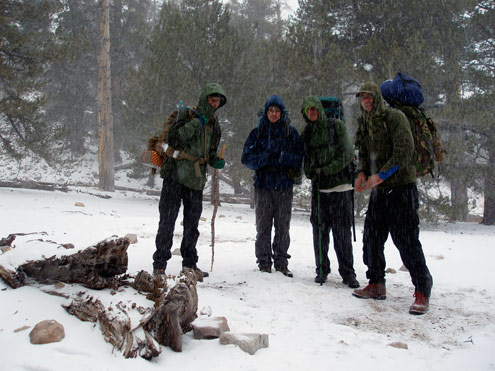 The storm was still blowing and the wind was ruthless. We were making jokes about ending up on Hiker Hell but luckily we prepared just enough to get out. 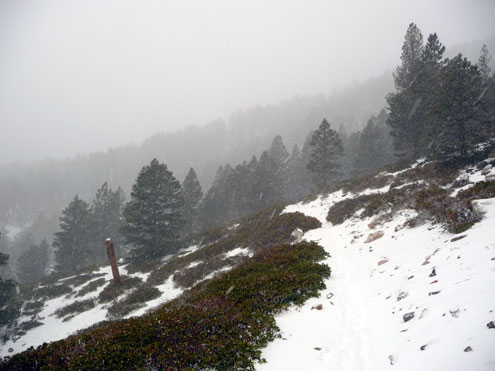 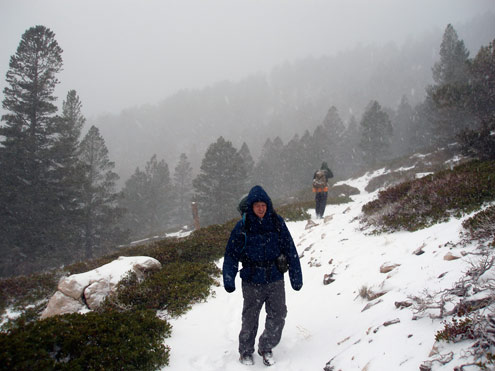 We pressed on and luckily most of the way was downhill. The wind and visibility were harsh and unforgiving. We kept a fast pace as we hiked out and on the way down we passed two hikers heading up. We stopped and talked with them and they said with much confidence they were headed to Dry Lake. To us they looked unprepared and for all we knew they might of been the ones that needed rescue later that day.

Fatigue began to set in for most of us but Tom used it as fuel to get out and he charged ahead of the pack. Our pace began to quicken and with every step we got closer to the car. Finally the trail mellowed out and we knew we were close. 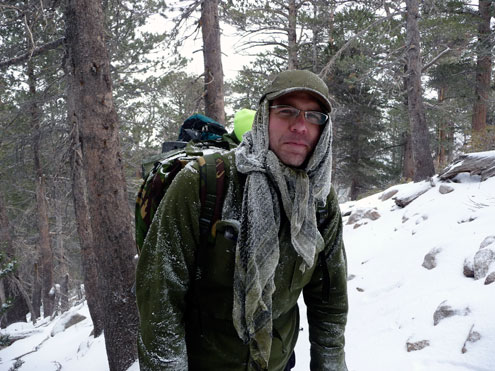 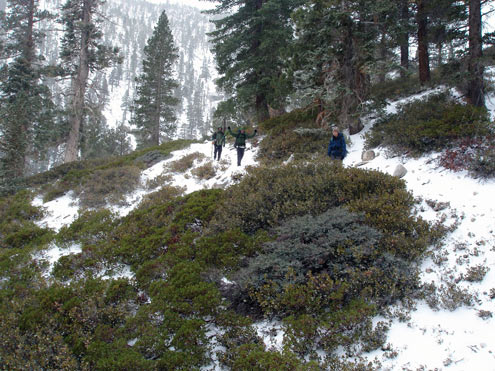 We kept talking about what we planned on ordering from In and Out burger — 2 burgers, animal fries, chocolate shake, a coke. We got to the car and we all let out this victory yell as if we had slayed a dragon. The one thing I take away from this trip is always prepare for the worse. 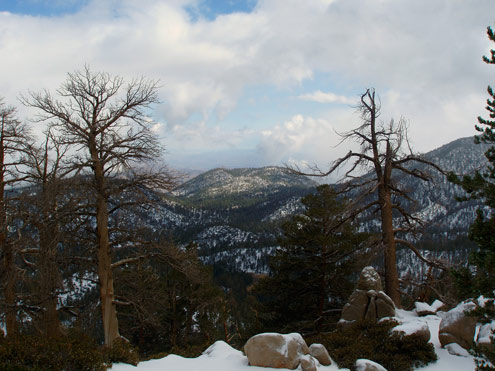 Bio: Born and raised in Queens, New York, Craig Metzger migrated to Southern California a few years ago for some sun and space. Metzger likes to think of himself as an avid outdoorsman, a musician and a “desktop activist” pertaining to issues involving the environment and land-access rights. He's also an artist and designer with various published works and has exhibited his work across the globe.

Craig included a postscript in his email: "This storm caused a plane to go down and two hikers needed to be rescued … pretty crazy."

Thank you Craig for sharing this story and for all of your thoughtful comments over the life of this blog. Stay tuned for more backyard adventures from Cleanest Line readers like you – we'll be running them on and off for the rest of the month.

The Power of Imagination by Dave Anderson