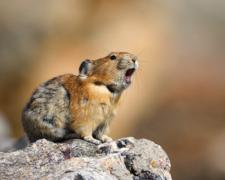 While humans debate the degree, extent and (still) the mere existence of climate change, scores of species are left to deal with its realities. We don’t all live at the seething edge of a major wildlife migration route, but many of us have observed subtle changes in the behaviors of the animals that live (or used to live) in our Backyard Corridors. In these changes lies a message; thus our question for this week:

Do you see evidence of climate change affecting animals in your area?

Please share your observations in the comments on our blog, The Cleanest Line, or on Patagonia’s Facebook page. Author and wildlife biologist Douglas Chadwick offers this take on some of the changes taking place in his back yard as a result of global warming:

Rationalization is an overwhelming human force. Once you form opinions, your mind works overtime, often subtly and even subconsciously, to select information that supports your biases while ignoring or purposefully giving less weight to observations that threaten to prove you wrong. Hey, I think I just described the cult of Climate Change Denial. But that wasn’t the point I wanted to make. In fact, I set out to admit that I’m probably biased the opposite way, believing that climate change is happening. I’m pretty sure that global warming is real and potentially devastating to the ecosystems we know and depend upon. Consequently, I’m that much more likely to interpret what could be ordinary variation in weather cycles and wildlife activity as evidence of an overheating planet. I find myself in a constant struggle to tell hints and hunches and unusual sightings — anecdotal stuff — apart from the kind of solid information that someone could test and verify.

I’m a wildlife biologist, but I’m not trying to play the cautious scientist here. I’m just trying to be honest. So I’m not going to tell you that what I report below is due to climate change, only that it sure looks like it might be. After all, I live in the Montana Rockies and spend most of my outdoor time in nearby Glacier National Park, home to 150 glaciers when founded in 1910. The reserve now has no more than a couple dozen and is expected to lose its last one within the next 15 years or so. Having watched great, grinding landforms of ice blue as lapis lazuli shrink in a relatively short time to pieces that barely qualify as dirty snowfields, I’m not too sympathetic to arguments that climate change is strictly tree-hugger propaganda.

[Photo: From The Wilderness Society website, A pika, which is a species threatened by global warming, in the wild. Photo by William C. Gladish]

Here’s what I’ve noticed among the animals along the Great Divide: With autumn lingering later than it used to and spring coming earlier many years, I see weasels, white-tailed ptarmigan, and snowshoe hares, all of which turn white for winter camouflage, standing out like light bulbs against brown backgrounds that ought to be snow-colored. This can’t improve their survival. I see grizzly tracks in December, when the great bears are supposed to be asleep in dens. I see more fresh sign during thaws in midwinter. And when the summer and fall months come seared by drought, as seems to happen more and more often, and the wild shrubs fail to produce a berry crop, we all see both black and grizzly bears down in the middle of town scrounging garbage and seeds from bird feeders. We also see starving young bears back on people’s porches early in spring, desperately searching for nourishment again because they didn’t put on enough fat to linger in their dens.

Everyone has noticed the region’s once-evergreen forests turning orange and brown as the warm part of the year lengthens and extreme winter cold snaps become more rare. What ought to translate into longer growing seasons for the conifers has turned even more quickly into perfect conditions for beetles, moths, and other insects to breed — multiple times in the case of mountain pine beetles — and overwinter in large numbers. The result has been outbreaks currently decimating the woodlands of mountain landscapes on both sides of the U.S-Canada border.

Mountain goats are everywhere in Glacier’s stone-faced heights. But during some 90-degree summers lately, it’s been hard to find any in view between dawn and dusk. These are cold-adapted creatures — a periglacial species, as ecologists would say, tied to the edges of topography bound in ice and snow. The only way the wool-clad goats have to quickly dump heat is to pant. In scorching weather, with what had been a permanent mantle of snowfields dwindling to patches in the high country, the goats in their double fur coats are concentrated on the shaded side of the highest peaks, hiding down in bergschrunds — the cleft where snowfields or ice-fields draw away from heated rock faces — or stretched out on the remnant snow or ice itself. I don’t notice as many pikas as I used to, especially at lower elevations. Maybe I wasn’t looking as hard before. Higher up among the summits, it seems to me that on many days, the pikas remain deep in their boulder-field habitats, keeping to the cool, moist shade until nearly sunset before coming out to gather grass and wildflowers to eat. Again, I can’t swear this is a genuine change from previous patterns, because I wasn’t paying very close attention until I learned that pikas simply keel over and die if their body temperature rises a couple of degrees above normal for a relatively short time. A climate scientist in Glacier, Dan Fagre, describes them as fuzzy thermometers.

I could continue the list: coyotes and bobcats pushing upward into formerly snowbound habitats where snowshoe-pawed lynx formerly had a strong advantage; bull trout and cutthroat trout struggling to hold on in waterways where the flow from glacier and snowfields grows thin over summer, the water turns warmer, and non-native fish threaten to outcompete them; waterfowl I’ve seen just this winter staying in high, open lakes and streams in the backcountry where they’ll have a risky time flying out to refuges at lower elevations if a sudden freeze and storm hits….. I wish I’d paid more attention to such details in previous years so I’d have a better idea of whether or not these things are within the bounds of normal fluctuations or truly ominous trends. Either way, they represent changes that appear striking — even if you’re not searching for evidence of the effects of global warming. They deserve a closer look and detailed measurements. People say, “If only animals could talk.” I think all kinds of them are telling us something, and I think we need to listen carefully.

Douglas H. Chadwick is a wildlife biologist who studied mountain goat ecology and social behavior atop the Crown of the Continent for seven years. He has since worked as a natural history journalist, producing hundreds of magazine articles, many of them for the National Geographic Society, on subjects from snow leopards to great whales. He has also written 14 books, two of them (on wolverines and Gobi grizzly bears) for Patagonia. Chadwick is a founding Board member of the Vital Ground Foundation, a conservation land trust, and serves on the Board of the Liz Claiborne Art Ortenberg Foundation, which supports wildlife research and community conservation programs throughout the world.