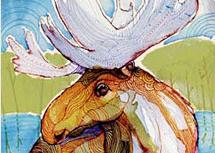 Like a majestic pack of finger-clicking primates roaming the wilds of the Internet, our migration through the Backyard Corridors series is almost complete. Thank you one and all for sharing your thoughts with us and helping to paint a better picture of local-scale corridor issues. This week's question:

Which animals in your area might need to move through corridors to survive?

Sue Halpern kicks things off with a story about her area of Vermont and how the Forest Service has put up new “corridor” signs and speed reductions on local highways. [Illustration: Jeremy Collins]

It was about three in the afternoon when the dog, sleeping soundly on a shaft of sunlight projected onto the living room floor, stood up abruptly, tail aloft, and started barking. Normally she is a quiet animal, not given to verbal outbursts unless she hears the word “ski.” But this was late summer. I followed the dog to the window that frames our meadow. The meadow is long-standing. It appears on maps dating back more than a century, an island of tall grass and wildflowers surrounded on all sides by an expansive ocean of trees. The dog pointed, I looked out, and there, not more than fifty feet from the house, were two moose, one big, the other slightly less big – a mother and child – ambling across the field. If they were rattled by the sound of a barking dog, they didn’t show it. In fact, they stopped, opposite the window, and looked our way, and waited. These were photo-op moose. They weren’t going anywhere. They looked at us, we looked at them until finally the dog got bored and lay back down on her sunny blanket. The moose nosed around in the grass, then started walking slowly to the back of the field where they disappeared into the woods, in the direction of our nearest neighbors. I called them up. “Two moose are coming your way,” I said. But the moose must have taken a detour. They didn’t show up at the neighbors’ for a month.

Where I live, on the spine of the Green Mountains, moose are not uncommon. Almost all of the town is wooded, most of it part of the Green Mountain National Forest. Moose wander about, and so do deer and coyotes and bears and fox and you name it. Our backyard is their backyard. It’s a big backyard, though, so most of the time they’re out of sight. Intact, uninterrupted habitat is both good and rare, but even here it’s not really continuous – we have roads. The moose that wandered through the meadow, that picked at the kale in my neighbors’ garden, might travel twenty-five miles in search of a mate; they need to cover a lot of ground. And in the heat of summer, when they seek out cooling, marshy wetlands, they are likely to be drawn to popular wallow in my town that abuts a paved, two-lane, state highway. Maybe a two-lane mountain road doesn’t sound highwayish to you, but for moose, it’s a gauntlet of cars and trucks that has, at least four times in the past few years, ended in death. (I’ve read that in a typical year, a total of 200 moose are killed by cars in Vermont, so I suppose that in some respects, our number is blessedly low.)

The road is also a great place to ride a bike. One unseasonably hot day about a year after the moose pair were in the meadow, I was coasting down from the height of land, thinking about lifting my hands from the brakes, then thinking better of it. My eyes were on the cyclometer, which said I was going about 20 mph, even so. The week before, a bear had jumped the guardrail about ten feet in front of me, to the surprise of us both. Now I was approaching the wallow. I thought, “There could be a moose.” And then I looked up and to my left, and there, as if I had conjured it, was a moose, knee deep in mud. A moose was supposed to be there, a moose was there, and by that convergence, at that very moment, I had a glimmer of how the world had been, and how it was meant, still, to be.

Recently, a consortium that includes The National Wildlife Federation, the U.S. Forest Service, the Vermont Agency of Transportation, the Vermont Fish and Wildlife Department, and Vermont Natural Resources Council, have gotten together to, in the words of their joint report, “maintain and restore habitat connectivity and identify and prioritize wildlife road crossing locations in Vermont.” Two of those priority crossings are in my town, one at the wallow, the other a little way down the road, at a parking area that turns into a salt lick once it’s been plowed. Pretty soon there will be new signs warning motorists that they are nearing high-traffic animal pathways. The road isn’t going to go away – not any time soon – nor are the cars or the trucks. But neither, hopefully, are the moose.

Sue Halpern lives in Ripton, Vermont and is a scholar-in-residence at Middlebury College.