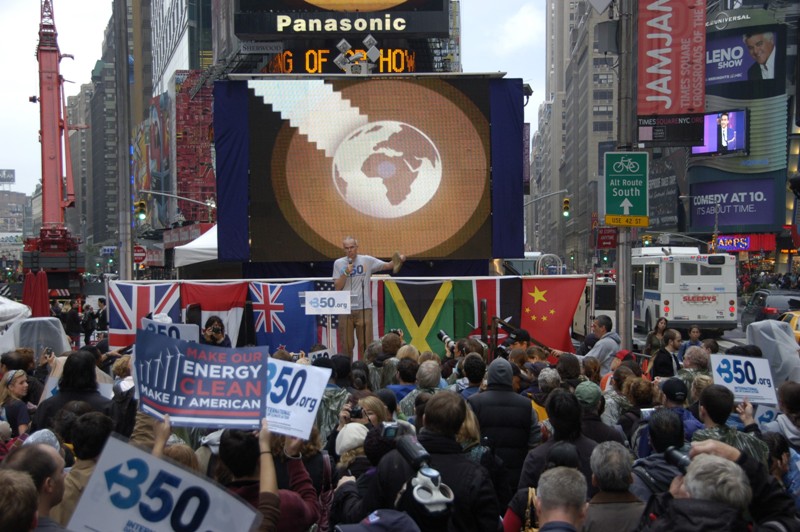 The election season has begun (at least according to the media) and here at Patagonia, we’ve revived our Vote the Environment campaign. We especially want to hear from you about what wild environmental issues are roaming through your backyard, neighborhood, or town. Let us know why people in your neck of the woods should “register to vote, know the environmental records of your candidates and vote the environment.”

You can post your stories here or on Patagonia’s Facebook page. Please keep ‘em short and civil. Here’s one from our friend, Bill McKibben, author of Eaarth and founder of 350.org. [Bill McKibben speaking at Times Square. Photo: Bill McKibbon Collection]

In its spring session, the state Senate voted not to extend an operating license for Vermont Yankee, the state’s one nuclear plant, which is currently scheduled to shut down in 2012. Despite the overwhelming economic power of the plant in a small state’s economy, it was a fairly easy decision, since the reactor’s operators had repeatedly proved they shouldn’t be trusted with a 7-11, much less a containment dome. Big pieces of their facility kept falling off, which is always a little unnerving, and then it transpired that the owners had straight-up lied to state officials about a network of pipes beneath the plant. There weren’t any such pipes, they’d insisted, until an inspection found the nonexistent pipes with radioactive water. Oh, those pipes. Yep, those pipes.

Vermont Yankee’s shutdown is not a done deal—the state’s GOP establishment has done all it can to protect the plant, and if the party retains the governor’s office the fight will continue. (And the plant’s owners will likely appeal to the feds, too). But, for now, it looks like Vermont will have to find a new source for something between a fifth and a third of its power.

If it doesn’t think creatively, it will just end up sucking coal-fired juice from big plants across the border in Massachusetts or New Hampshire—that is, we Vermonters will take the risk we used to place on ourselves, and transfer it via coal-fired climate change to some Bangladeshi farmer watching the ocean rise at the edge of his field. (A person who, by the way, doesn’t even benefit from the power generated). Since that’s clearly immoral, it would be nice to replace that energy with some other source.

Cue Race to Replace, a rambunctious youth-led campaign that is spending the summer crisscrossing the state registering voters—voters committed to sending the message that it’s not good enough to shut down the nuke, that that job is only half done till you’ve figured out what to use instead. They’re backing conservation, solar power, wind energy, and so on—and that can be more controversial than it sounds. In Vermont, for instance, there’s been a strong anti-windpower movement, often backed by second-home owners whose idea of a perfect retreat from their suburban Boston coal-fired manse does not include a turbine on the ridgeline.

But these young people—many of them from Middlebury College where I teach—are pointing out that they’re going to have to live in this state and on this planet for another sixty or seventy years, and that they’ll deal with turbines if they still get to have winter. I ran into them last weekend at Solarfest, an annual affair founded by what once were hippies and now are…graying hippies. And they got up and gave the kids a standing ovation, because they were damned glad to see their good work continuing.

It’s in contrast to the more buttoned down political types in the state. The League of Conservation Voters, for instance (which ironically is helping back the Race to Replace campaign) felt the need to endorse just one of the five Democratic candidates in the gubernatorial primary—even though they all had great environmental records. It was typical power-grab politics, the kind of thing that could turn young people into cynics (especially since the LCV didn’t choose the youngest candidate in the race, a guy who’s just winding up a stint at Google and might bring the youthful energy necessary to end some of the gridlock in the state capitol).

Happily, the Race to Replace crew seems beyond cynicism—when I last observed them, they were pedaling a solar-powered green-painted tricycle across the Solarfest grounds, diligently signing up new voters. Oh, and they were putting out a video that maybe gets the point across in a subtler, funnier way than I’ve managed. They found a candidate of their own, even younger than the Google guy. Even younger than they are. Hooray for passing the torch.

Bill McKibben is the author of Falter, the latest of several books, and a founder of 350.org, the grassroots climate change movement. A long-time friend to several of us at Patagonia, we don’t see him nearly enough because he lives in the mountains near Lake Champlain. In 2014, a few biologists saw fit to name a new species of woodland gnat — Megophthalmidia mckibbeni — in his honor.