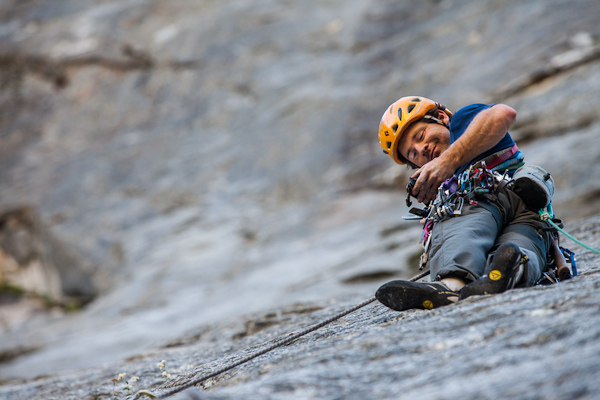 Middle Cathedral: the ugly stepbrother of El Capitan that sits just across the valley, shoulders slumped, hiding his dark north-facing flanks that almost never see sun. The monolith hosts many seldom-climbed classics: Stoner’s Highway, the Direct North Buttress or DMB (more commonly known as the “do not bother”), Quicksilver and Mother Earth, to name a few.

In the fall of 2010, Mikey Schaefer asked if I’d like to check out the Smith-Crawford way over on the right side. “Sure”, I said, thinking, I can always follow. Making our way up the first few pitches I was surprised by the quality of rock and how good the climbing was. At each belay I noticed Mikey scrutinizing the rock to climber’s left. I should have guessed he was up to something. The next thing I know we’re back up there with a bolt kit, hooks, and an assortment of pitons, hand drilling from small stances and marginal gear placements. Note to self: always think twice before accepting an invitation to climb with Mikey Schaefer.

The slabby, run-out face routes put up in the ‘70s and ‘80s have always fascinated me. Repeating these climbs, you can’t help but wonder what a cool head it must have taken to launch into the unknown, with thin committing moves, gunning it toward tiny stances and hand drilling for 20 minutes at a time. This was entirely new for me. I had never drilled a bolt before and I’ve never been part of a first ascent in Yosemite. And to do this with a master like Mikey was an honor. 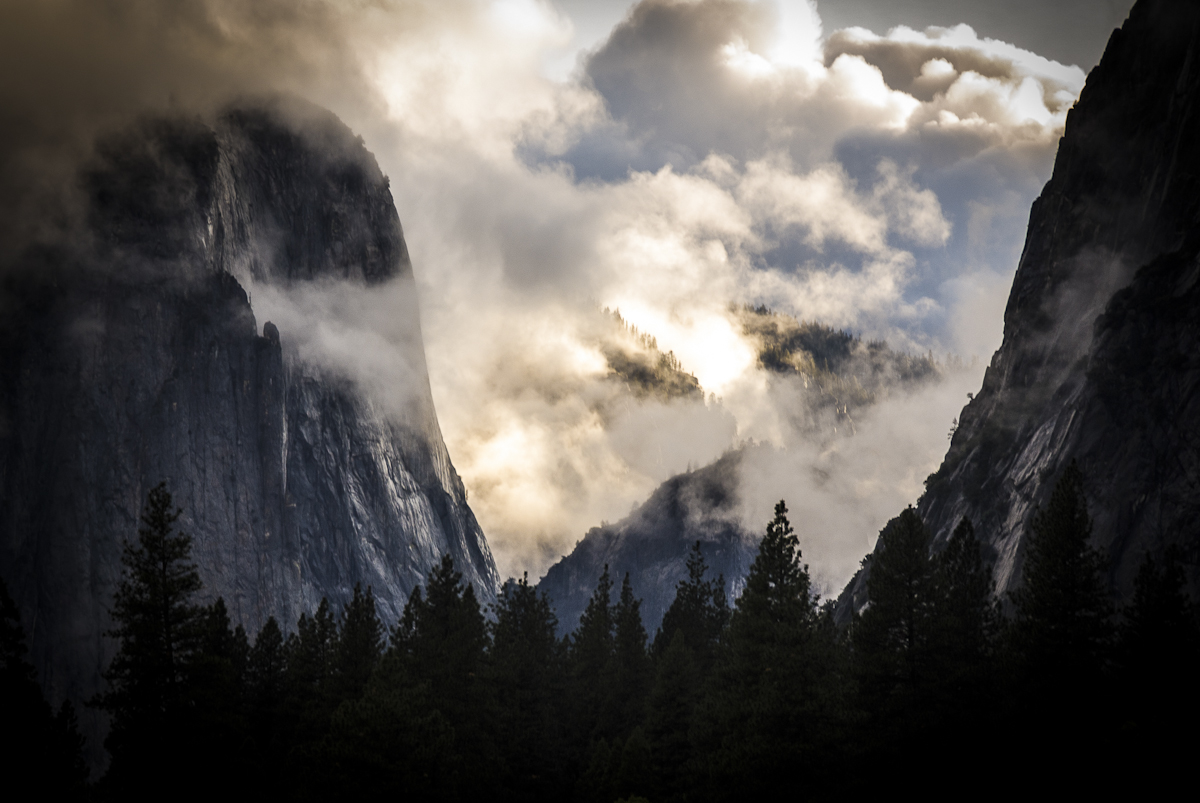 In a time when you think everything has been climbed, especially in Yosemite, there are still routes to be done. “Not too many people want to deal with it,” says Mikey. “Routes like this require a ton of hard work and commitment.” Look at his track record and you’ll see he has a penchant for this sort of thing:

The lack of repeats on his routes has nothing to do with scary run-outs, typical of Yosemite face climbs. For the most part, Mikey’s routes are well protected and relatively safe. It’s the sheer difficulty and fancy old-school footwork that has a tendency to shut people down. Couple this with the endurance required for grade V climbing and the list of possible suitors quickly thins out.

Our work ethic on Middle Cathedral was casual. Wake up late, eat a long breakfast, and spend the afternoon taking turns on lead. With the help of Josh Huckaby we established three pitches during the first couple days. Mikey and I peppered in a few days here and there and got it up to six pitches. The climbing had been moderate, in the 5.10 to 5.11 range, but once the wall got steeper it was easy to assume the climbing would get harder. With temperatures dropping, we called it off ‘til spring. 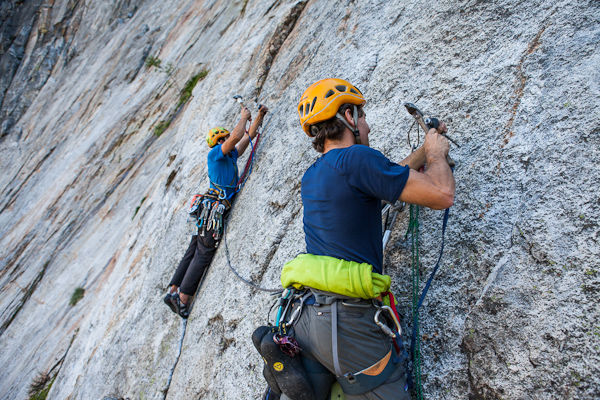 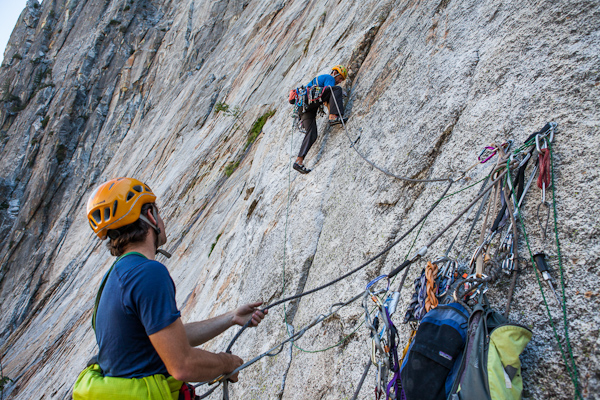 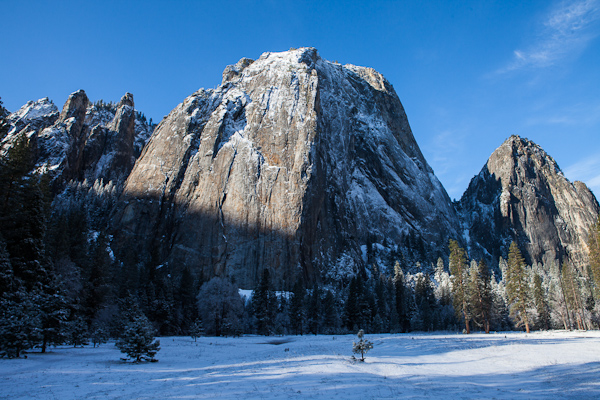 It was a long wet winter. Anxious to get back up there, I returned in late April and everything was wet. Rain and snowstorms hammered the valley. Waiting for Mikey, I repeatedly hiked the Gunsight with my binos, trying to scope the line above our high point. What a beautiful time of year: snow stacked on the ledges and in the trees, puffy storm clouds rolling in like clockwork, and the Valley devoid of its summertime traffic. I was excited to be a part of this. I wanted so badly to get back on the route.

One afternoon a friend and I went to climb something on Glacier Point Apron. Before tying in at the base, I slipped and fell down the snow bank and arrested myself on a small step. I was in denial at first; shaking it off, telling my partner I was fine. He took one look at my pale face and told me I wasn’t. Then the pain set in. My shoulder had dislocated. I would be out for a long time.

I drove home and Mikey arrived in the Valley a few days later. He immediately went back up to work on the route. A month or so later a friend emailed me a picture of rock fall on Middle Cathedral. It looked like it had ripped through the entire route. “I hope you’re not up there”, he wrote. Worried, I called Mikey and he said he’d been up there a lot, around 20 days total. The rock fall just happened to occur on his day off, and the course it took was to the left of the route, although some shrapnel had chopped a few of the fixed lines.

Last month, with my shoulder healed up and back to normal, I met up with Mikey in the Valley. It had been almost two years since we first started the route. Unbeknownst to me, Mikey had been working on it, diligently, mostly by himself. Somewhat surprised, because he originally thought the route would end before the headwall, he said, “It will for sure go to the top. The bottom 12 or so pitches are in the 5.12+ range, and the climbing just gets better and much harder on the headwall.”

Almost the entire wall was fixed. Mikey and I jugged to his highpoint, around 1,800 feet up, nearly to the top. On the second pitch of the overhanging headwall I watched as Mikey lowered himself out into space. I could only imagine what it’s been like up here, all alone for many days, hand drilling anchors, fixing hundreds of feet of rope, trying to figure out 5.13 moves, wondering if his route will go free. All the while, El Capitan stands proudly across the valley, resplendent in the all-day sun, while his forgotten stepbrother lurks in shadow. 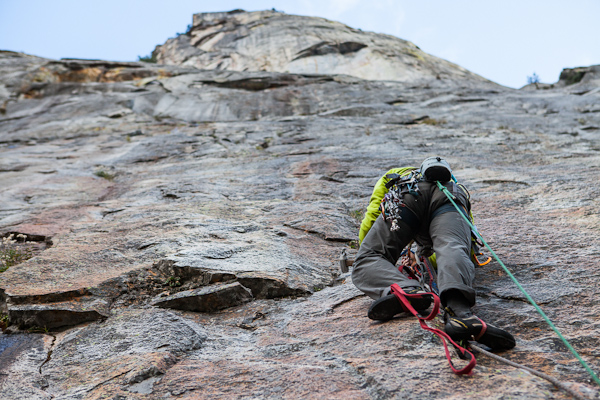 Mikey Schaefer working his way up the route, the headwall looming high above. Photo: Jeff Johnson 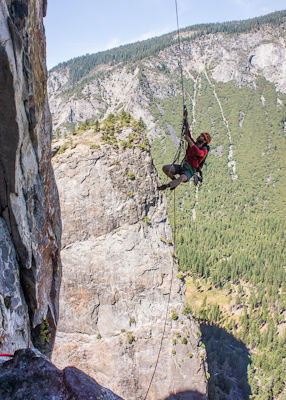 Mikey Schaefer lowers out on the headwall. Photo: Jeff Johnson 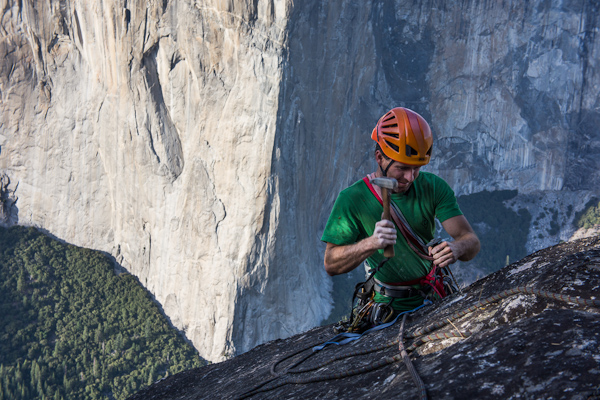 Only one pitch to go. I could see the excitement in Mikey’s eyes as he lead around an easy arête and disappeared. “Ha!” he yelled, “We’ll be up there in five minutes!” After 40 discontinuous days of hard and often lonely work, Mikey stood on top of his beloved Middle Cathedral, calling his new route Father Time.

Now comes the hard part: freeing the route. A day off and Mikey was right back up there working the crux moves on the headwall. It’s a massive undertaking, but the man is persistent. He’s doing two days on, one day off until he gets it. I’ll be up there this week, tagging along and checking in on the progress, however daunting. 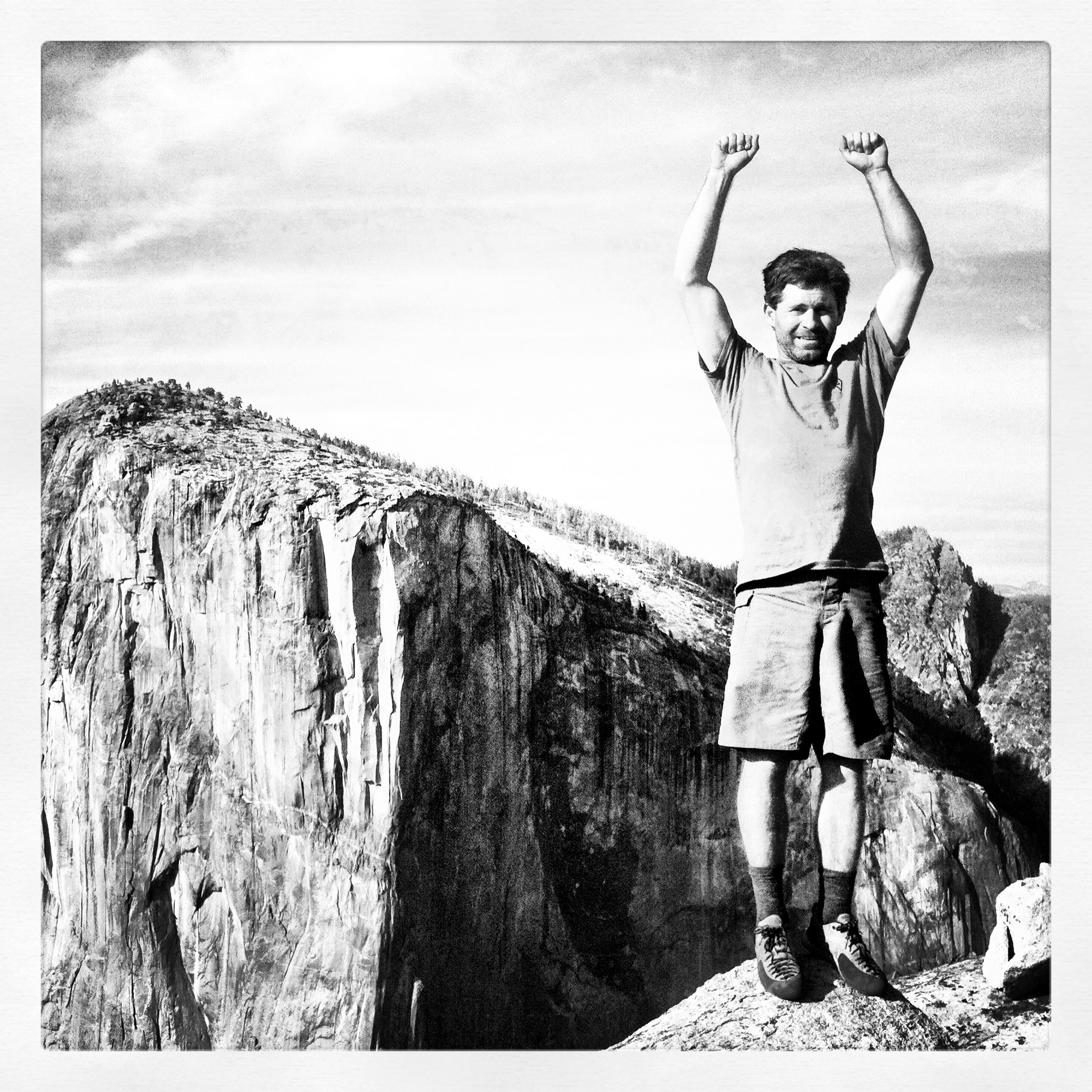 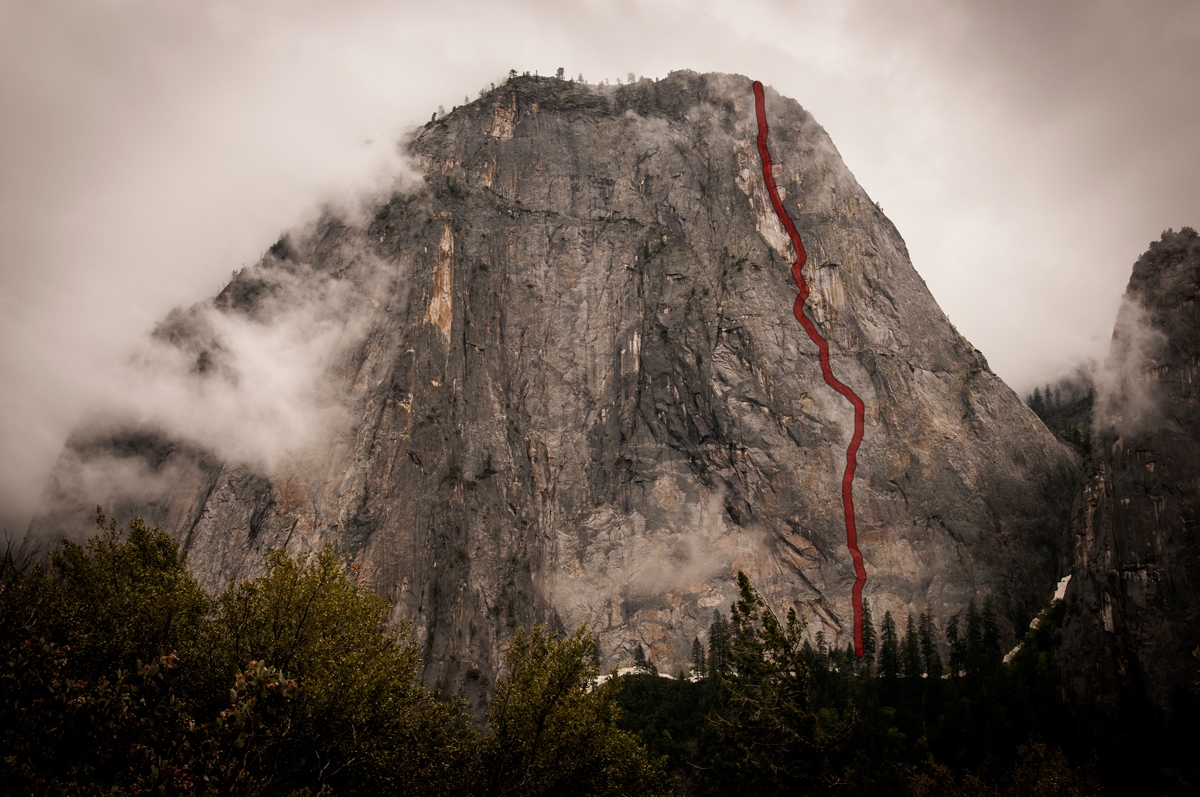 Keep an eye on our Instagram (#megaproj) and Tumblr feeds for more of Jeff’s photos as Mikey attempts to free climb Father Time. You can also follow Mikey’s feed at @mikeylikesrocks. Good luck guys!