This summer, Patagonia teamed up with non-profit environmental and social justice group, Louisiana Bucket Brigade (LABB), to assist with a project massive in scale and ambition: to track the full impact of the greatest ecological disaster in American history, the Deepwater Horizon oil spill of Spring 2010. The impacts of this disaster extend well beyond unspeakable environmental degradation to the collapse of sustainable industries like fishing and tourism, and the human communities those industries support. Today we offer the fifth in a week-long series of stories from Patagonia employees who travelled to the Gulf to assist the LABB in their ongoing community surveys and Crisis Map project.

Birds Falling Out of the Sky 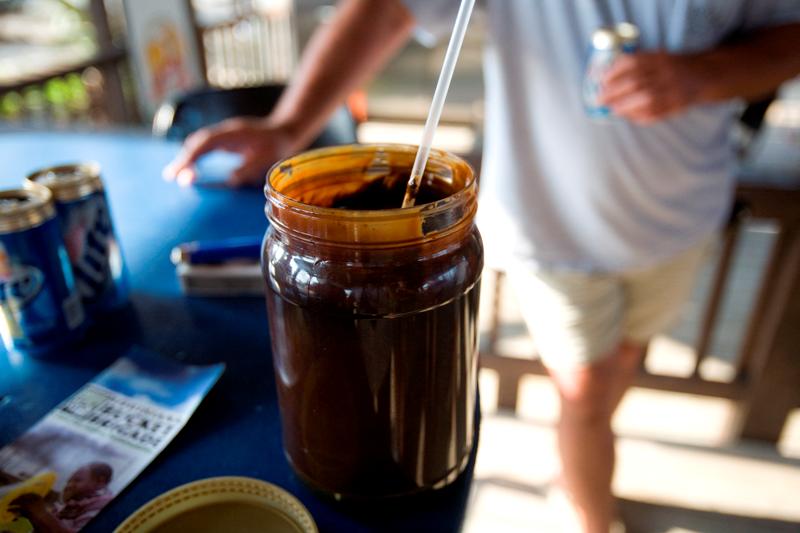 Christina Allen and I were surveying members of the community at the Trade Winds Marina and met a group of fisherman and the marina owners. The business lost 90% of the fishing-excursion revenue and the only money to be made was off of BP workers shopping at the Marina Mart and staying at the Marina Hotel. We were shown a jar of oil that had been collected in a “safe” fishing area and told stories of birds falling dead out of the sky. None of this was normal to the men that grew up and lived their entire lives on this finger of land jutting into the Gulf of Mexico. Jonathan, one of the Trade-Winds Marina owners, extended an invitation to take us by boat to the Barrier Islands. This is where the birds feed that he saw falling dead out of the sky.  Little did I know this would be the most eye-opening boat ride I’ve ever experienced.

[Oil collected by a local fisherman along the shore of a local barrier island. Photo: Christina Speed.]

With perfect timing as we were leaving the dock the following day, the song “Come Sail Away’” came on the radio. I couldn’t help but enjoy the possibly contaminated air I was breathing on the certainly contaminated water we were boating on. We made our way through the ‘Production,’ huge industrial platforms that used deep natural gasses to push the oil along beneath the earth’s surface to the oil rigs.  I had never seen such an industrial body of water, yet this ‘production’ was normal for the Gulf and also employed the majority of the community.  We weren’t able to find any crude oil at the first island we stopped at but we did find bags full of trash left from the BP clean up crew. We went off to the second Barrier Island where Jonathan had previously found oil 5 inches beneath the sand. Once we set foot onto the sand we discovered tar balls, dead fish and dead birds, along with a little more trash. 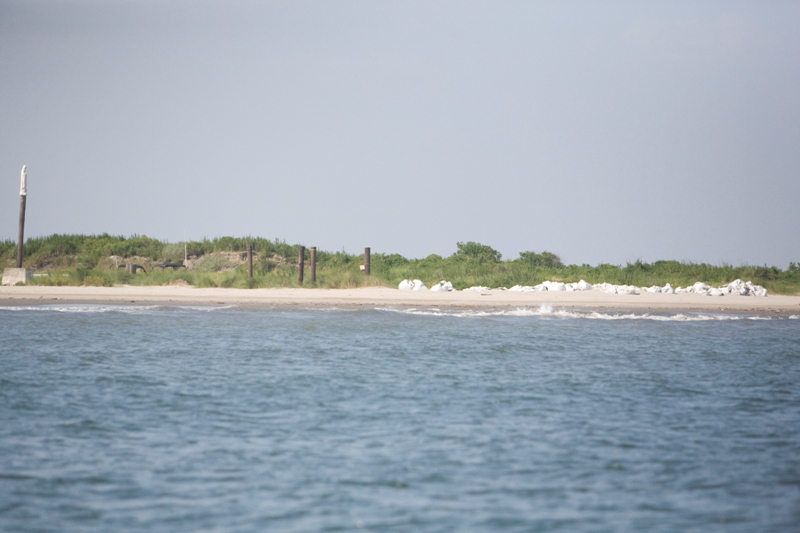 Tar balls aren’t as innocent as they sound; they formed smears of oil along the sand that were at least 2 or 3 feet wide. Another Patagonia colleague, Christina Speed, dissected one of the Black Drum fish that were scattered along the shore line. She found oil in their stomachs and throughout their bodies. This makes sense because the Black Drum are bottom feeders, making it hard for them not to eat the oil while swimming through it. This was all in what was considered a safe fishing zone. According to some of the locals, the fish are smart enough to swim around the oil plumes underwater. I guess they were wrong.

The following day we surveyed in Chauvin. After that long, hot day of surveying was over, we feasted at our favorite Cocodrie Marina, compliments of Captain Jonathan. This was where, pre-oil disaster, they would ‘fish all day and tell lies all night.’

[Right – One of the many petroleum rigs found throughout Gulf waters. Left – A statue of the Virgin Mary (img. left) overlooks the ruins of a church and bags of oil-soaked sand collected by BP cleanup crews. Photos: Christina Speed.]