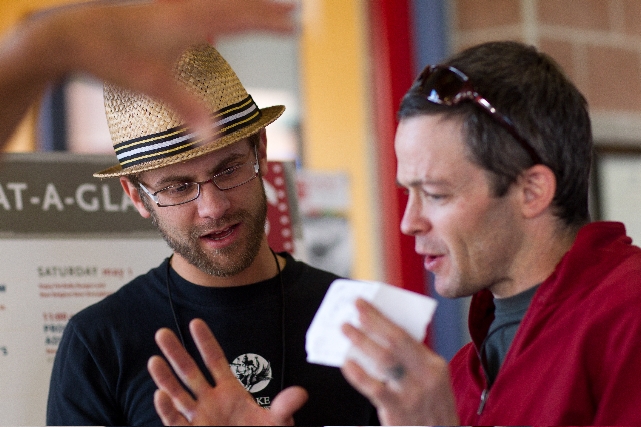 We love the escape. Sometimes climbing is just climbing, and everything doesn’t need to symbolize anything more. I read that Hemingway said there was no symbolism in The Old Man and the Sea (my all-time favorite book), and that “The old man is an old man. The sea is the sea.” We can draw our own parallels however we like, which is part of the beauty of art.

Other times, the symbolism isn’t just part of it, it’s everything.

Too many climbing films suffer greatly from lack of story, I think. At least they used to – the filmmakers seem to be catching on; or maybe the artists, writers, and photographers drawn to creative approaches have begun to see film as another outlet for storytelling. I think that’s it with Jeremy Collins. His film Border Country combines art and animation, blending video and stills, and the story and narration struck me as perfect, right on time, not overdone, not underdone, but just perfect.

“I definitely approached this as an art piece. My sketchbook was the base of most of the imagery, but the camera, too, became a paintbrush,” Jer told me.

It shows. And though it’s a climbing film, it really isn’t about climbing. If I had to describe it, I’d say it’s a short film on friendship, connection, inspiration, natural beauty, and art. Geez, sounds lame, I know – where’s Chuck Norris and the Texas Rangers, damn it? Don’t need ‘em. We’ve got our beloved Jonny and Micah – always – and Jer Collins and crew. Yes, in a nine-minute film. Things deeper than the oh-so-cliché shirtless dillweed screaming over, and over, and freaking over, to a thumping techno soundtrack, as he slaps at some little hold of rock. Yes, I’m old. No, I don’t care about some stupid little hold of rock and some screaming dude in which there is no story. I do not own a bong. I’d rather watch curling in the Olympics. I love good stories. If there’s a compelling story behind the little hold of rock and the screaming dude, then yeah, I’m in. Definitely in. There, we know my biases.

Maybe I shouldn’t bash the shirtless dillweed flicks. Jer: “You can’t blame people for these films. It’s easy to pull off, and people are passionate about what they do, and want to find the best way to share it.”

Damn, it’s so good to have people like him around. Even better when they share their art with us. Check it out – it’s in Tin Shed #4 (Spring 2010), and also embedded below. To borrow from Jer in the film: sometimes a film is just a film. Sometimes, it’s something more.

For a cool behind-the-scenes short on the making of Border Country, click here.