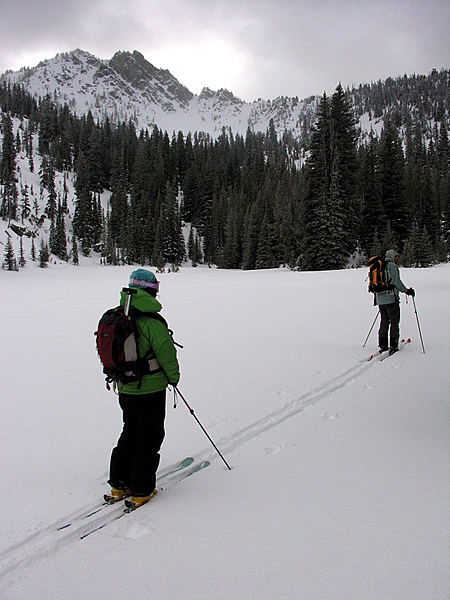 We got this field report from Laura Cooper, a Virginian living in Oregon. I really liked her story, writing and dedication to the outdoors – she’s an ESL teacher who spends most of her time backpacking, skiing and reading, as well as birding, paddling, and taking pictures.Thanks for the great report Laura!

After forty-five minutes of using my arm as a wall, I stopped resisting and let our gear overtake me. One full Volkswagen Rabbit, three passengers, and six days of ski camping in eastern Oregon’s back and front country lay before me. Some believe travel to be a privilege only afforded by the rich, however I have found, the less money I make, the easier it is to leave.

Free from work and out of cell phone range, this was my first try atski bumming. Transients of all kinds find home at the edges and inbetweens of societies. Arriving after dark we quite literally made ourcamp at the edge of a sno-park in between forest and civilization. Wedug out a kitchen, complete with counter space, and then retired to ouroversized tent.

Too lazy to cook, we awoke the next morning, and in Brian’s words we were all "rippin hungry." Dreaming of cinnamon rolls and fried eggs, our kitchen made of snow came up short. Todd asked, "Can you grab the orange juice?"

"How about some fruit?"

Fueled by peanut butter and chocolate, the three of us set out to explore the backcountry and scout some lines. It was like entering a snow globe. Powder covered every tree branch, creek bed, and hill. Best of all there were no tracks. Angel Basin, an area situated between two peaks, gave us more than enough route choices for three days in the backcountry, and we took full advantage. We skied up. We skied down. We skied hard.

The next day the lifts at Anthony Lakes opened. We found ourselves at the Norman Rockwell of ski resorts in the company of rosy cheeked youth and older folks sporting cowboy hats, Nordic snowflake sweaters, and every style of mustache imaginable. With only one lift, we expected lines but we hit run after satisfying run without waiting.

Our last night at Anthony Lakes, a band was booked to play the Star Bottle Bar below the lodge. The crowd, warmed by alcohol and a fireplace, took to this band. Tom Petty covers particularly enlivened it. Women and men largely over fifty were dancing, twisting, and moving around the bar. Brave enough to endure mountain climbs and cold weather, but too shy to dance, Brian, Todd, and I watched from a booth tucked in the corner while the ski patrol entertained. These were the revered men and women in red jackets we had watched from the chair lift. We envied their lifestyle and their ability to make effortless turns down moguled diamonds named things like Rock Garden and Avalanche. Apparently they were curious about us as well. One man asked, "Are you the three who have been camping at the edge of our lot all week?"

"Yes," we replied in unison.

"What a life," he said and we agreed. 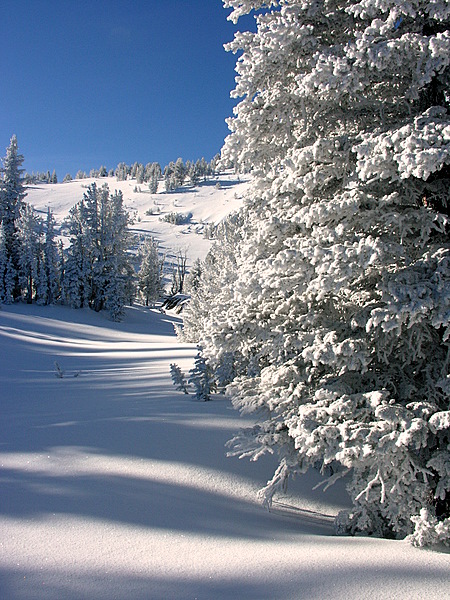