Dammit Hammershark, I mumbled as CFS and I began rapping from Mammoth Terrace – 10 pitches up El Cap – to the ground, in the dark. Someone had forgotten our food bag. Granted, Hammershark had nothing to do with it, but he was outvoted. (We had to blame someone.) CFS and I were the last to leave the truck, and somehow spaced the food bag. Surely it had nothing to do with our midday margarita sendoff. None of us had (or have) ever climbed El Cap – “The Captain.” We were off to a helluva start.

CFS and I jugged back up in the morning, and the cluster began. I’ve gone stupid-light on plenty of climbs, but stupid-heavy? Gimme the manspoon over slow and heavy any day. I’d never done a climb using bigwall party tactics – I’m a bigwall bumbly for sure – and I’d soon discover why they call big haul bags “the pigs.”

But we’d have none of that. Ever since my New Year’s Resolution, I’ve been trying to be more positive.

“This sucks, let’s go down,” I whined. We’d just hauled a pitch. The pigs stuck on everything. They laughed. “Oh no, I’m serious,” I said to CFS and Hammershark. “I’ll go down right now. Screw this, let’s go cragging. Let’s just quit. Go to the bar. This sucks.”

“Yeah, but if I wasn’t outvoted, or if one of you changes your mind, I’ll go down in a heartbeat – hey Goose! I just got a text from the Sweedish Bikini Team saying they’re looking for you in the meadows!”

Oh – nicknames. Hammershark also goes by Jarrett, but we decided on nicknames before the trip (we being CFS and I). Viola! Mellow, laconic Jarrett morphed into the ferocious Hammershark. CFS and I? Goose and Maverick, a.k.a. Tom Cruise, respectively. (Editor’s note: It has been revealed to us that CFS and Mr. Cordes have a gentlemanly disagreement as to who is Goose and who is Maverick.)

While I steadfastly maintain my attitude about hauling, I will concede that hanging out and sleeping on the wall is pretty damned cool. Hell, maybe they’ll just make a road to the top soon – they have everything else in the Valley – and I can drive to the top, rap down a pitch or two and go camping.

Anyway, the next day led to the next, and finally, at record snail pace, infused with interminable clusterf***s with the pigs and soup-kitchen tangles at the belays, we joined the Nose (we were on the Triple Direct, which joins the iconic Nose route at pitch 19). Weather was moving in come morning, so the forecast said. Time to go down. Yeah, it was sunset, we’d be rapping in the dark – but how hard can it be to rappel the most famous route in the world from 2,000 feet up? Oh yeah – there’s a separate rap route called the Nose Rappels. Whatever, sounds easy. I won’t get us lost…

I turned on my headlamp and started rappellin’. Of this I am certain: I had us on-route for the first rappel. And then, ironic as it may sound, I missed Dolt Tower. Soon it was 4 a.m., wind kickin’, Hammershark and Goose shivering on a ledge while I literally swung from the end of my rope in a sea of blank granite, headlamp slashing across the rock, running sideways pendulums to find a string of old anchors. Kinda spooky, but kinda fun in that weird way.

Come sunrise we took a rest in the portaledge for a few hours. As we did, the storm commenced. Of course. And, for reasons too complex to get into (I wasn’t completely sure there were anchors below…), we’d done single-strand rappels, one horribly sideways, thus had two fixed lines above that we had to retrieve. Out of the portaledge I jugged, and into the snowstorm. Which soon became a rainstorm. Which, finally, saw us back on the ground. I was limping, a little damp and damn, my shoulders were sore.

“I think you guys might have pioneered a new descent line – haven’t heard of anyone botching that one before,” Tommy later told me.

“Yeah dude we’re the same, pioneering new challenges in the valley!” I replied. “You and me, TC, high five!”

And though hauling still sucks, in a weird way the mini-epic made me nostalgic for the old days. As-in: “Oh, Kelly’s getting lost and bumbling through the night? Guess the injuries must be healing up!” Maybe so. And that’s good. But for the food bag, I still blame Hammershark. 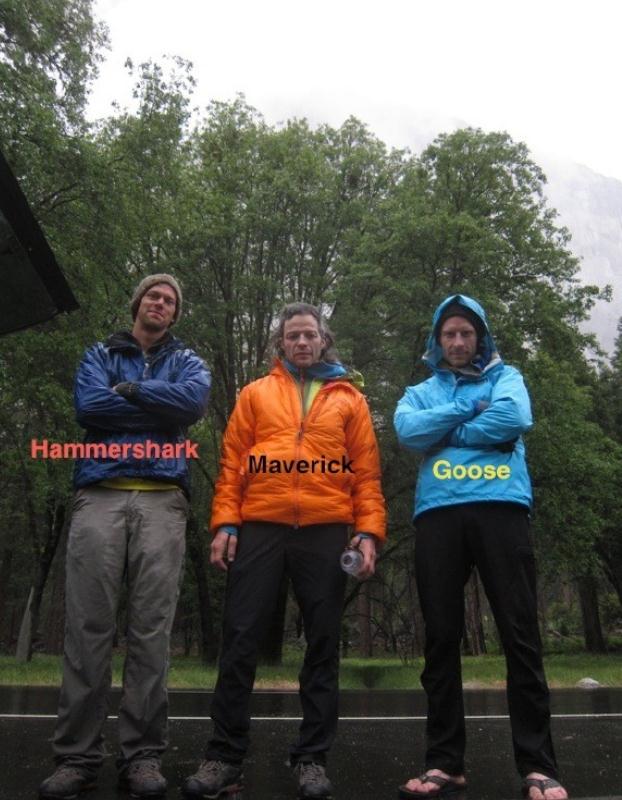