Last summer, Patagonia Dillon store employee Bucky Ballou drove from her home in Montana to Yosemite National Park, where she helped operate a bird-banding station with The Institute for Bird Populations (IBP). It was her second field season volunteering through Patagonia’s environmental internship program, which pays employees’ their full wages and benefits for up to two months while they work with nonprofit environmental groups worldwide. Bucky’s internship helped to support the Monitoring Avian Productivity and Survivorship (MAPS) study, a continent-wide network of bird netting and banding stations coordinated by IBP. She wrote this account:

My car was overflowing with three month’s worth of camping gear when I started my drive West in early May. The bird song identifier played in my iPod as I made my way toward MAPS training in Grant’s Pass, Oregon.

After a week of pre-sunrise to sunset intensive training, I headed on to Yosemite. I was the first of our crew of three interns and a biologist to arrive at our campsite. (My husband Craig joined us in June for two months.) I chose a level spot under a huge sugar pine to pitch my tent. It was great to be back in the park.

National Parks like Yosemite provide ideal locations for large-scale, long-term biomonitoring. That’s because parks are among the few places in the U.S. where wildlife population trends are relatively unaffected by local changes in land-use practices.

Since songbirds are excellent indicators of environmental change in ecosystems, we were there to collect data concerning their productivity (how many breed and fledge each breeding season) and survivorship (how many return from their wintering grounds.) We operated six sites within Yosemite, at five elevations from 3,000-8,000 feet, and in various vegetations, including coniferous forest, sub-alpine meadows, wet meadows and riparian zones. Each day we visited a different site, where we set up 10 nets.

My internship provided several highlights. We banded the second indigo bunting to be documented in Mariposa County. (Last season we banded the first, both second-year males.)  We also captured a willow flycatcher, which is very rare for Yosemite, and banded a pair of green-tailed towhees. On our busiest day, we caught and recorded 178 birds at Crane Flats. On average we banded about 50 birds a day. I estimate we caught 65 species and heard or saw 25 more. In all, we banded or recaptured well over 2,000 birds each season.

It was such a privilege to be able to revisit and hold these fragile creatures in hand. Here are some photos we took that help to explain the banding process. 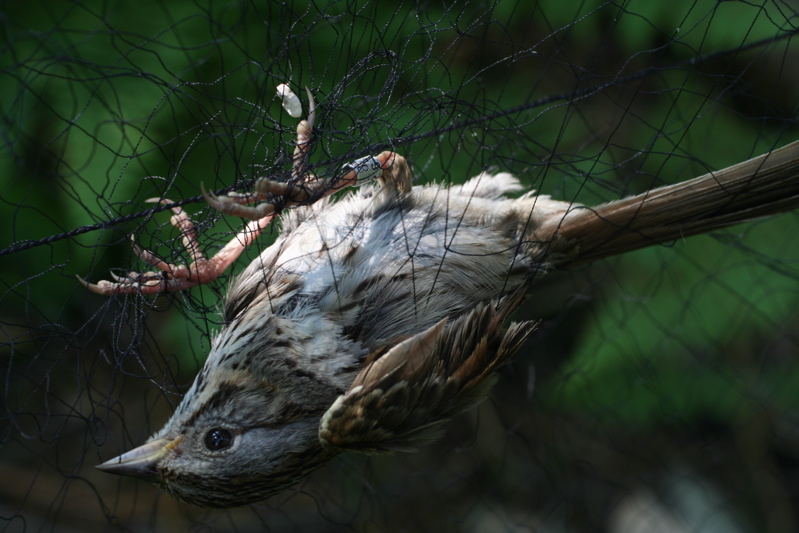 Sometimes we recaptured birds that were previously banded. Always a good sign of
survivorship. 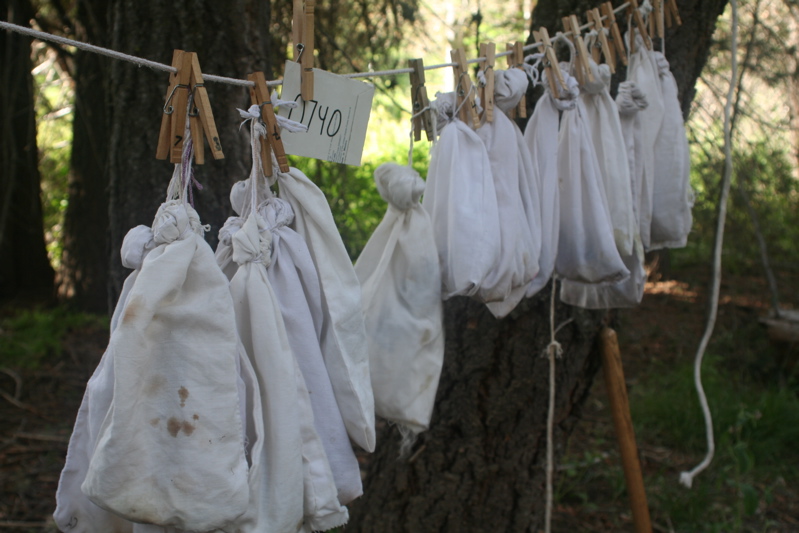 We carried each bird back to our station in a cloth bag, where they patiently waited their turn for study. 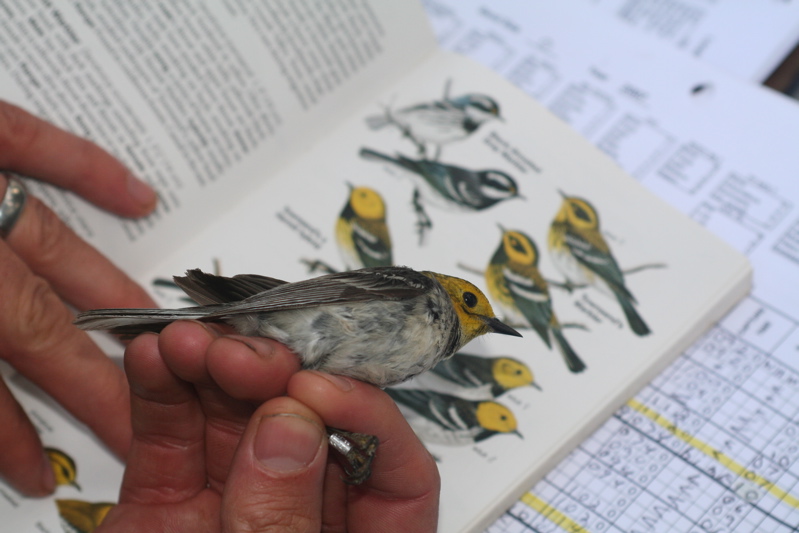 First we’d identify the bird. This one is a hermit warbler. 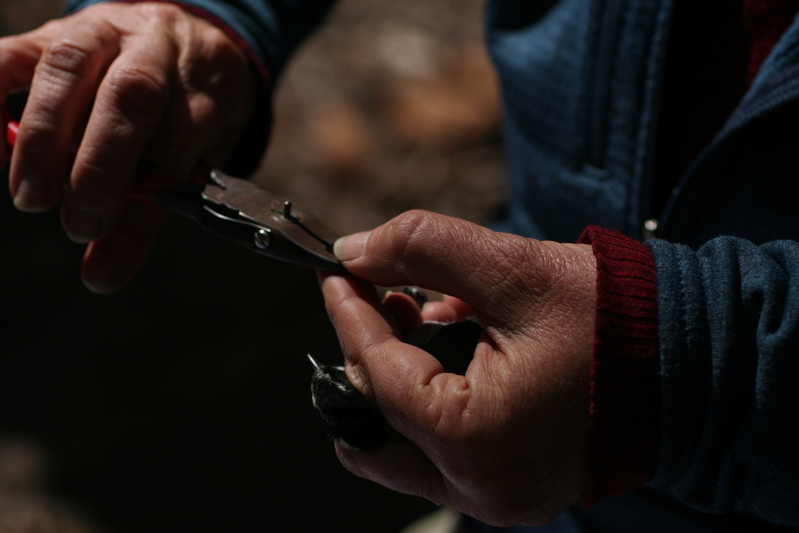 After measuring the leg and choosing the correct band size, we would attach the band with special pliers. 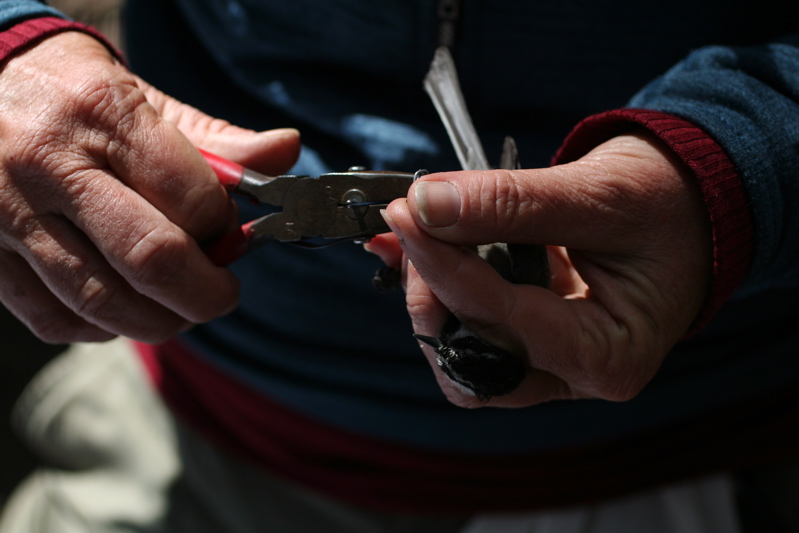 Each band has an individual number, which we recorded.

International Bird Populations wanted to know the sex and age of every banded bird. This is a brood patch on a breeding female, so this bird is at least one-year old. The mothers keep their babies warm this way. 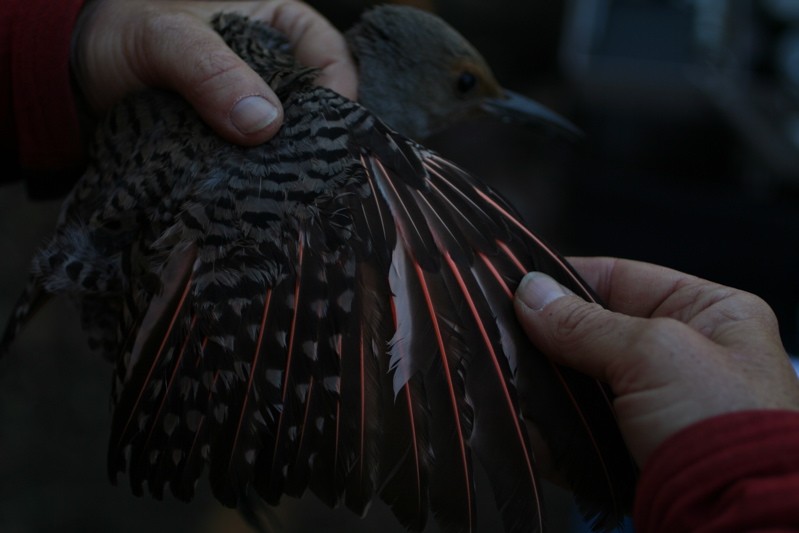 Determining a bird’s age was the most difficult part for me. Wings molt in certain patterns that give clues to the age of the bird, however most birds have their own order of molting. A huge reference book, "Identification Guide to North American Birds," by Peter Pyle, became our bible for determining age, sex, molt limits and plumage for every songbird in North America. It was a complicated exercise in logic that constantly changed and challenged. 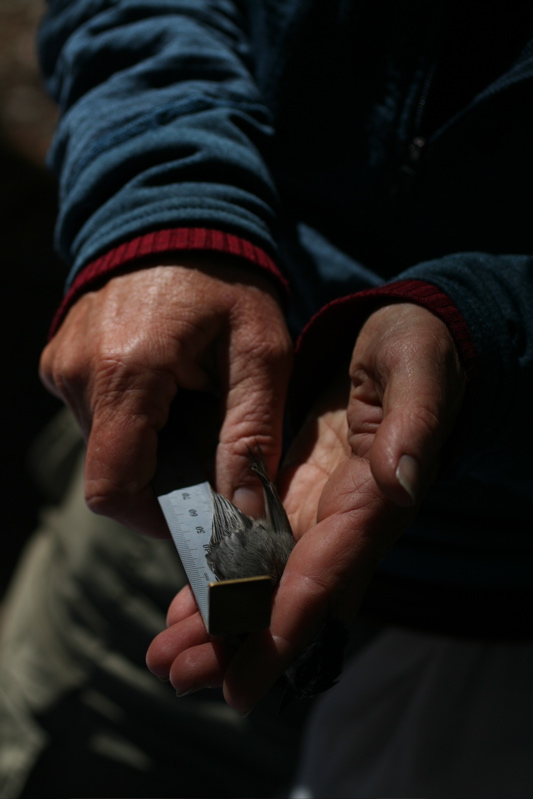 We measured the wing length of every bird. 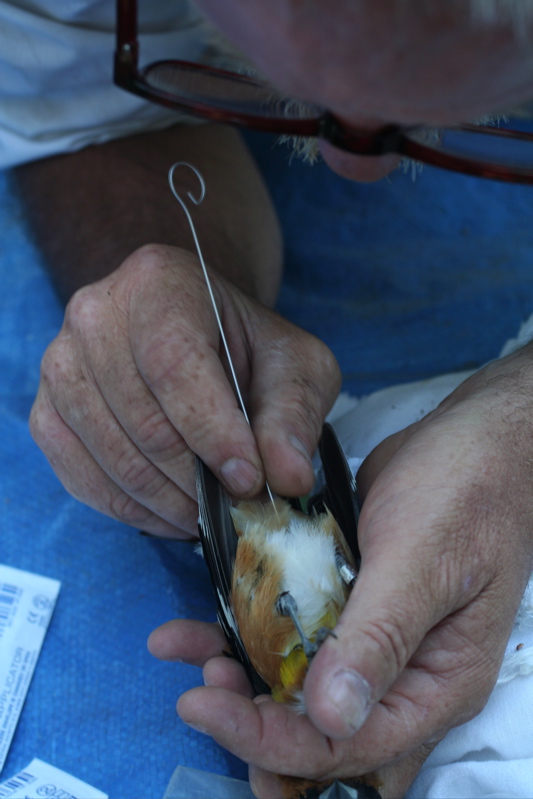 We swabbed certain species for avian flu. We also collected tail feathers for a cooperative study with UCLA for West Nile Virus. 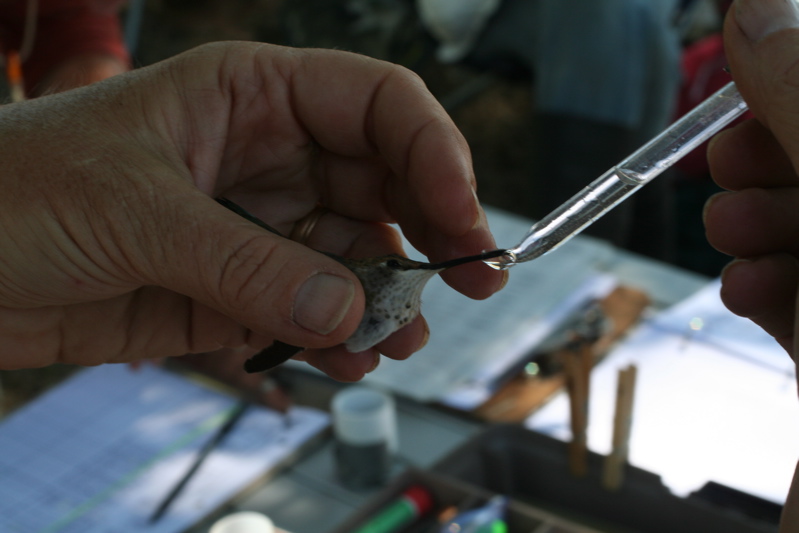 When we captured a hummingbird we would feed it sugar water before taking data. We could actually see their long tongues taking the liquid from the dropper. 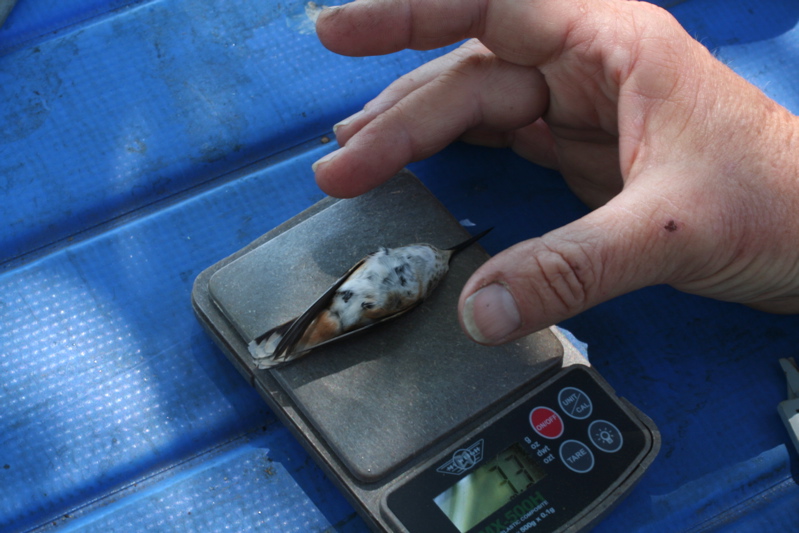 We weighed every bird on this little scale. Only the hummers were so docile on their backs. We weighed all other species head down in a tube on the scale. 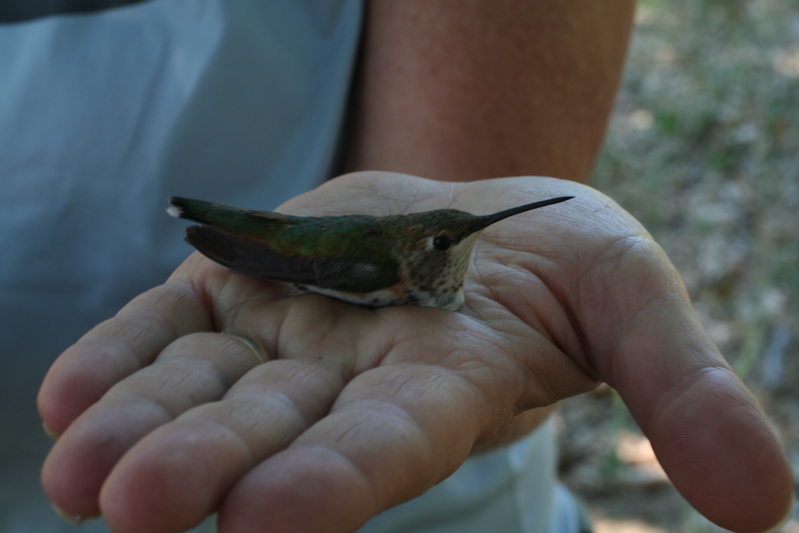 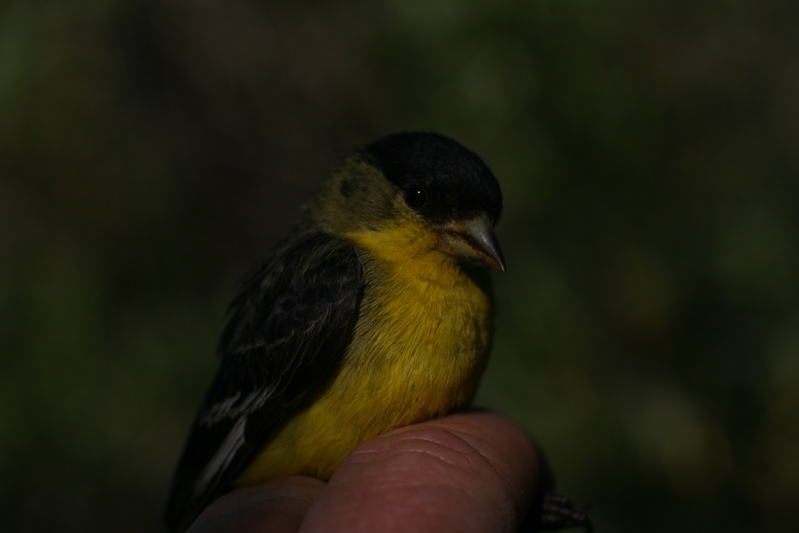 This lesser goldfinch (LEGO) sang to me while I was extracting him from the net. All birds have this four-letter code derived from their name. 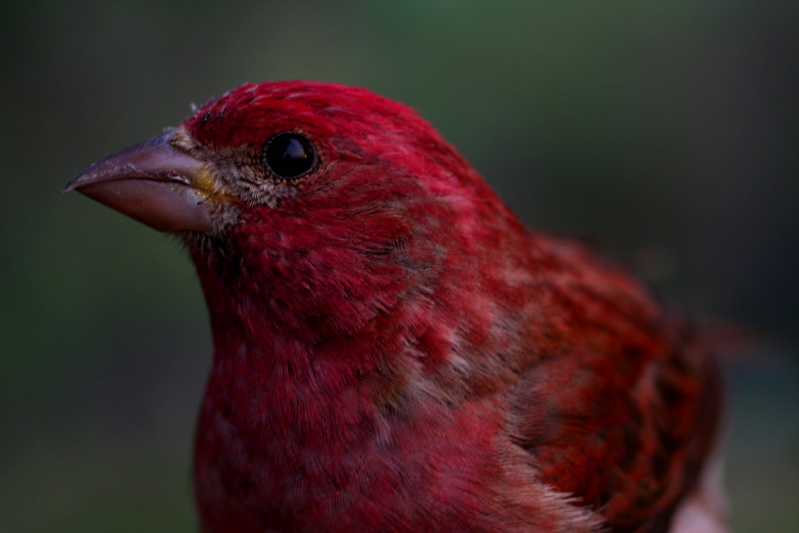 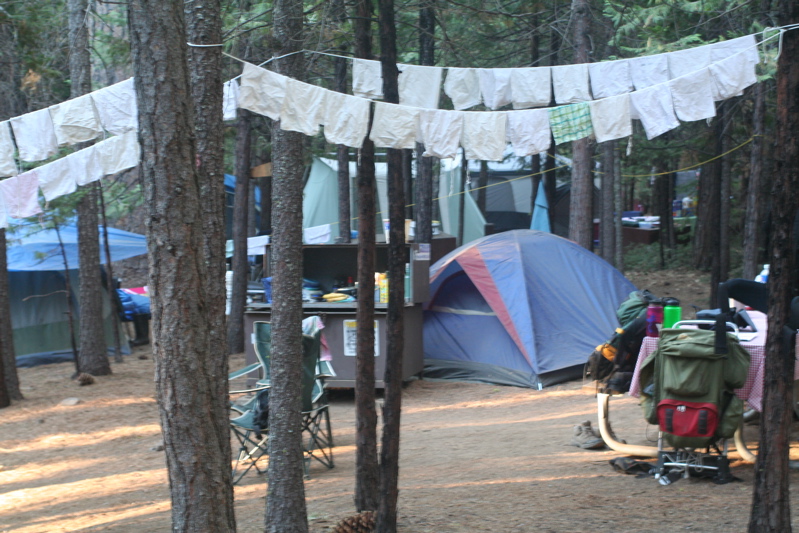 Home Sweet Home at Hodgdon Meadow. The prayer flags are actually freshly laundered bird bags hung out to dry.  Living in a National Park Campground was definitely an experience. Privacy was the only thing I missed, but it was amazing being an ambassador every day. I loved it. 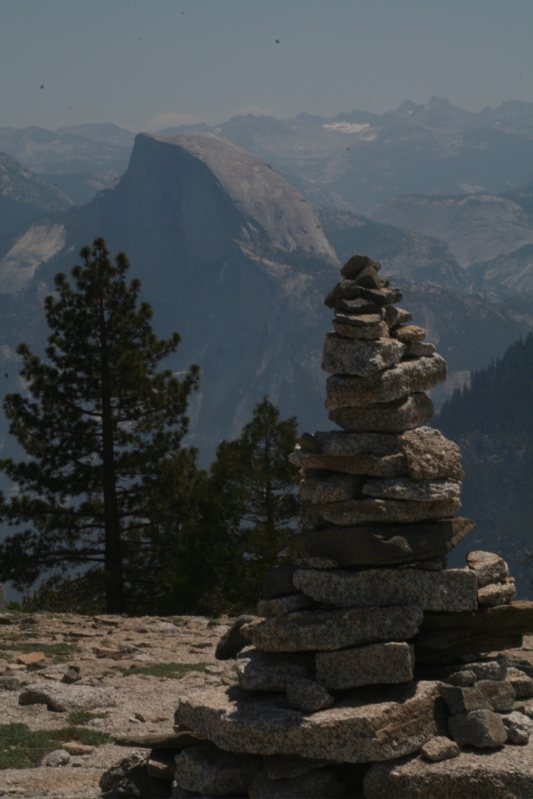 On our days off we did a lot of hiking. This is a view of Half Dome from the top of El Cap. No, we did not climb it! There is a spectacular trail to it from the north rim of the Valley.