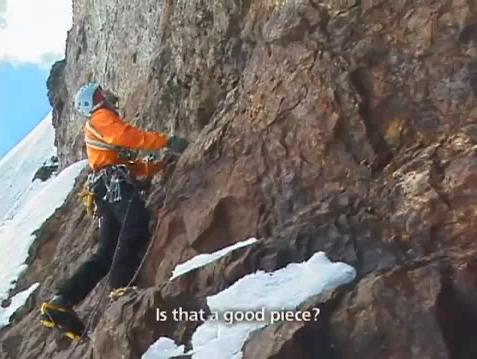 In 2005, Marko Prezelj and I planned an expedition to the (still) unclimbed north wall of Kalanka, a formidable 21,000 foot peak in the Indian Himalaya. With three weeks to go, the bureaucrats who hold the key to that fine mountain threw up one final hurdle, a second permit fee to be paid to the state government. For our thin pocketbooks, this was over the line and we scrambled for new ideas. Pakistan? No, we had only four weeks, not enough time for the remote Karakoram. Nepal? We'd both been there too many times already and craved a change of scenery. Alaska? Ditto. Patagonia? Out of season. Peru? Why not? Neither of us had been there, it has a reputation for stable weather, no permit fees, and stunning peaks approachable in 1-2 days in most cases. We rebooked our tickets after a short Skype-fueled discussion.

[Screen grab from Cayesh: The Calling with Steve House on the 11-pitch route he and Mark Prezelj established in 2005, Cordillera Blanca, Peru. Watch the entire film after the jump. Photo: House/Prezelj]

Arriving in Peru was easy, and we spent the first week climbing glorious sunny granite at the high-altitude multi-pitch crag called El Esphinge, the Sphinx. Acclimated, we flipped through images of various Peruvian monsters – we were like kids in a candy store, what to grab first? For a couple of ice-inclined alpinists the choice was an easy one: Cayesh.

Cayesh is remarkable for its stunning symmetry, needle-point summit, and mixed rock and ice terrain. We started up our route after an afternoon of reconnaissance with child-like joy, climbing impetuously, spontaneously. We took along the video camera on a whim, and viewing the resulting film, Cayesh: The Calling, re-focuses those memories of being wrapped up in the shared joy of discovering new pitch after new pitch, each one unfolding naturally. The tone of the trip – spontaneity and fun – comes through in the film. Though the shots are shaky, it's self-filmed, and never staged. For me it brings out the spirit Marko and I shared on that wall. I hope you enjoy climbing Cayesh with us as much as we enjoyed climbing it together.