When I moved into the house in Dhaka where I lived in 1993, I noticed there was no wastebasket in my room. On my first trip to the market, I bought one – and soon discovered that throwing things “away” meant something different in the capital of Bangladesh than back home. What I threw into the trash quickly resurfaced in the community, put to another use. My blue flowered deodorant container turned up on a neighbor’s living room shelf as a vase for real flowers. A small boy stuck rods through my empty hair conditioner bottle and attached wheels, making a toy car he pulled around on a string.

The potential for reuse is everywhere. It’s like that folk tale many of us were read as kids. Joseph’s grandfather turns his favorite blanket into a jacket. Joseph wears it out, so Grandpa turns the jacket into a vest. The vest becomes a handkerchief. The handkerchief becomes a tie. The tie becomes a button. Finally the button is lost. Even Grandpa can’t make something from nothing – but the lesson about how Stuff can be repurposed and reused again and again is clear.

Makers of luxury cars know this – they proudly refer to their used models as pre-owned. At the other end of the economic scale, the streets of Havana are filled with American cars from the 1950s that Cubans care for meticulously to keep running.

What if we all adopted this attitude, so that used or secondhand became a badge of honor, rather than a term associated with economic necessity? It’s cool to reuse stuff – it means our Stuff has had adventures before coming to us. And it means that we’re reducing our footprints – using less energy and materials and making less waste.

Companies should commit to making Stuff that lasts longer. Our end of the deal is committing to use our Stuff for a long time. We need to use it, reuse it and reuse it again. We can share it, donate it, trade it, sell it, Freecycle it, join a group like the Fixers Collective in New York or The Repair Cafe in Holland – whatever, just keep it out of the dump.

Clothing is a prime commodity for reuse. The average American throws away 68 pounds of clothing a year. If it’s Patagonia gear you’re ready to pass on, check out the used Patagonia storefront on eBay. From eBay to garage sales to charity donation programs to dinner party clothing swaps, there are plenty of opportunities to share instead of waste. 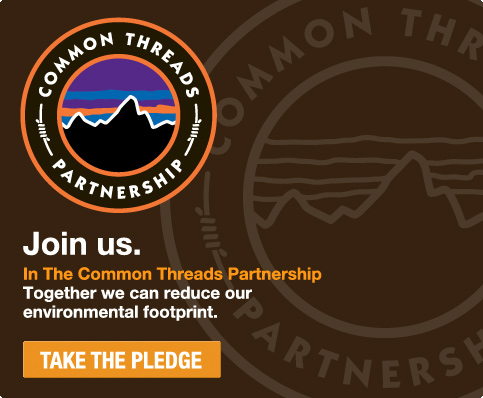