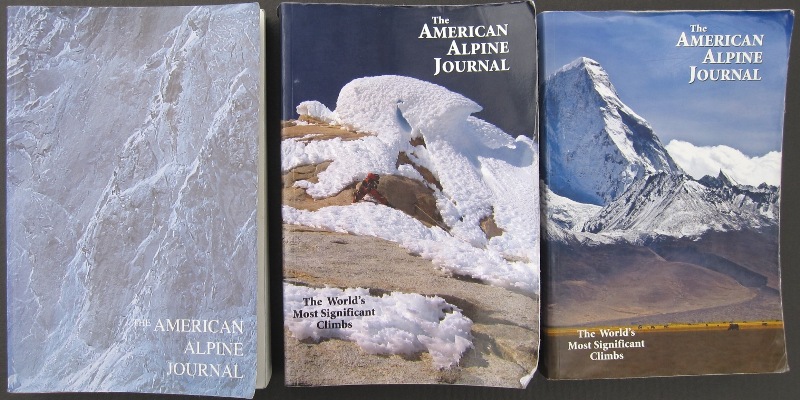 What makes a good cover? Well, as with most things, that depends. What do you want? Sex appeal? Eye candy? Or are you hoping to convey something more? The story behind the image means something. To me it does, anyway. Since 2000 I’ve been one of the editors of the American Alpine Journal, and we try to capture the previous year in big new routes, worldwide, in our annual edition, as we’ve done since 1929. Right now we’re frantically trying to wrap things up and get the 2011 book to press.

What to put on the cover? It should probably be from one of the feature articles – we select features based on what we (with consultation from others in the serious alpine community) consider the most badass, interesting and inspiring big climbs of the previous year. And after sorting through the barrage of butt-shots, we find some gems and make a decision.

Some people like our choices, others don’t. As the saying goes, want ten different opinions on something? Ask five different climbers.

I have the last 20 AAJs on my bookshelf, and I looked through and chose my favorite covers. My three semi-finalists:

• 1998 – Brendan Murphy and Andy Cave visible as mere specks on their new route on the massive north face of Changabang, photo by Roger Payne.

All beautiful. My all-time favorite, however, is one that some people despised (I had no input in choosing, as it was my first year with the AAJ and I wasn’t involved in such decisions then). Apparently some AAC members so hated it that they cut-up the cover and mailed it back. Yikes. “Beefcake shot,” some said. Here it is:

• 2001 – Sunglasses, no shirt, big ol’ toothy grin. Sneakers on his feet. What, is he on the beach? Oh, no he isn’t. The cover shows a young Mike Pennings, July 2000, chillin’ on the summit of 19,024-foot Hainabrakk East Tower after he and Jonny Copp blasted a hard (5.11 C2) 3,700′ new route in three days, and the image spans onto the back of the book, full double spread, no text beyond our title, and Shipton Spire, The Flame, and a sea of unnamed, unclimbed peaks of the Pakistani Karakoram rising from chaotic glaciers spilling into the distance. Photo by Jonny Copp. (Click here for Jonny’s article, “Trick of the Light”.) 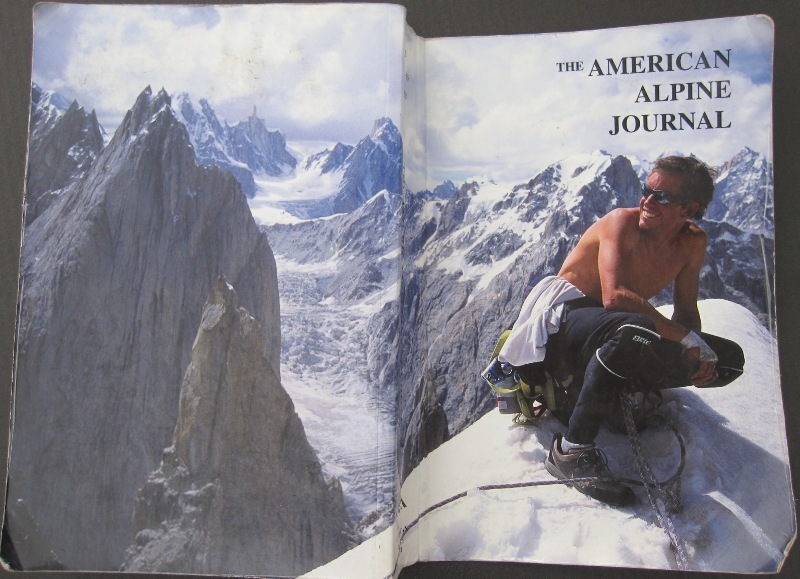 On one hand, I can understand the gripes. I suppose Mikey looks like he could be on the cover of some supermarket poseur mag, with a 10 Steps to Flatter Abs article inside. If you just glanced at it and had no idea what they did (and somehow weren’t curious about what they did, and why, then, would they be on the cover?), I can imagine: “Heya Bubb, what’s with this photo?!? I mean, he isn’t even wearing supergaiters! You don’t go out in the mountains like that! [Umm, actually, Chief…oh, never mind.] Naw, now carrying a 70-pound pack, I tells ya, now that’s climbing! Ya know, back in the day me ‘n McGillicutty used to head up and…”

Whew. Then again, some people simply didn’t like the photo. Fair enough.

Me, I love the image because it so brilliantly represented a paradigm shift. Of course Jonny and Mike weren’t the first to do something in lightweight style, and of course things happen in degrees. But rarely had climbers punched it with that level of commitment on the daunting, massive rock towers of the Karakoram, in such fantastic lightweight style, with such speed and confidence on such difficult terrain. It was like they turned the Trango Valley into their own afternoon crag. Any one of their three ascents on that trip would be a lifetime achievement for 99.9+% of us. One of the most badass trips of the year, worldwide. And, best of all, they did it with smiles on their faces. Beefcake on the summit, looking like he just got done cragging. Yup, exactly.