Product Feedback. Boy do we get a lot of it . . . From fit to function to fashion, from price to purpose to product names, customer feedback is one thing we’ve grown to rely on. We believe our customers are more passionate and outspoken than the norm. And while that means there’s some folks out there who are hard to please, our quality just wouldn’t be the same if it weren’t for their willingness to ask for something better.

Case in Point: the Critical Mass Bag. Long-time customers have seen many versions of this bag, each with its die-hard proponents and detractors. It was born of our own selfish desire to toss the day’s gear into a sack, throw it over a shoulder, and be on our self-propelled way.

The feedback we get from you comes from all angles: e-mails, phone calls, blog posts, letters (yes, people still write us by hand), magazine reviews, and surveys. But what do we do with it? Frankly, we get so much input that we could never respond to all of it. Since we can’t respond to everyone directly, this post is a modest attempt to show how your feedback shapes our design decisions.

Historically, we gathered customer feedback on large spreadsheets and saved them by month. These files go back well over 5 years. If you wrote or called to complain about the fit of the Stand-Up Shorts back in August of 2002, chances are north of 50% we can find your comments.

Why so far back? In the world of product development, it’s not uncommon for two years to pass between concept and completion. And so, a suggestion received tomorrow about, say, the MLC, likely won’t show up in that product until 2010. During this time, we’re developing the revised product, testing the new design, sourcing new materials, drawing up contracts with production facilities, scheduling factory time, planning distribution, etc. etc. etc.

But how can you tell if your feedback is ever put to use? To answer that, let’s go back to that Critical Mass Bag, and some feedback received during the two years leading up to the latest version:

ya all should let me test your products cuase [sic] actually im [sic] testing them now in boulder colorado as a bike messenger and they are barely passing the test.

This feedback is worthwhile in its own right, if only for letting us know that a customer in a Western mountain town is unhappy with our gear. Sadly for us–but sadder still for the customer– it’s hard to make positive changes without specifics.

We want to know what you think, good or bad. Though this person (below) isn’t happy with the bag, their simple and specific comment gives us something concrete to work with:

Please remove the zippered pocket from the computer sleeve side of the bag, it scratches laptops and the zipper pull gets inside the cd drive.

This feedback from April 06 led us to take a look at the offending pocket. What do you know, it is sorta in the way: 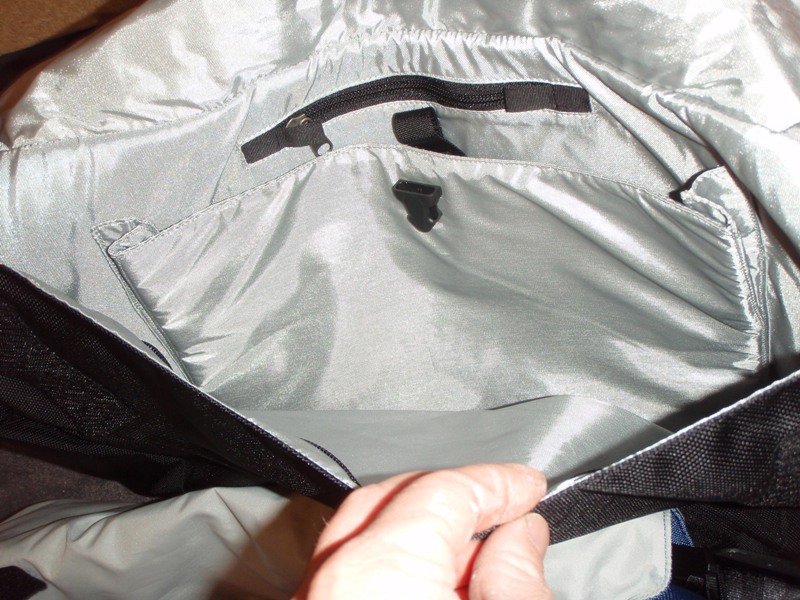 So back to the drawing board we go. As of Spring 2008, we’re happy to report the offending zipper was removed and–responding to other rafts of feedback about laptop compatibility–the laptop pocket dramatically adjusted and expanded to be more user-friendly: 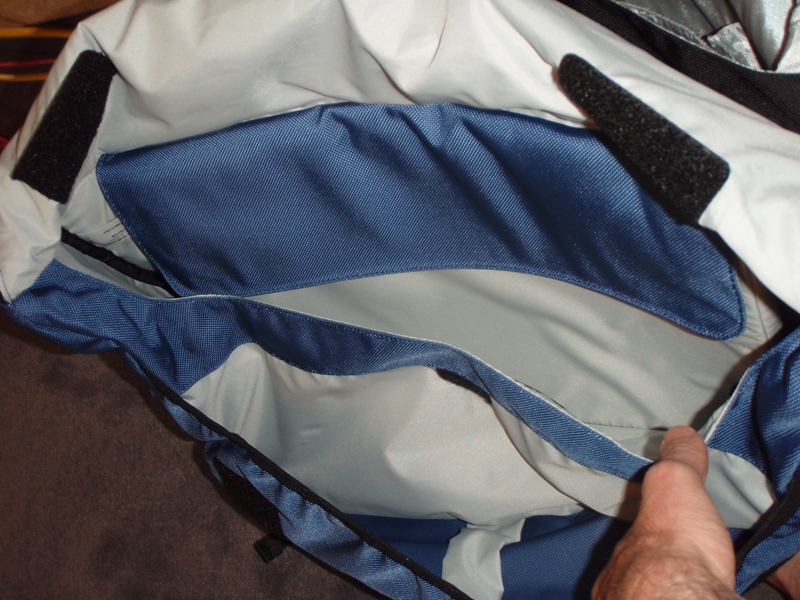 Sometimes the feedback is a bit more pointed. We can’t help but take this kind of input with a smile; anyone who writes a note like this must really love their Patagonia gear:

The new critical mass messenger bag is not as good as the old one! It has a new buckle design that pops open spontaneously [sic], less reflective tape than the old one, and a silly laptop insert that spoils the great empty space inside the bag. Bad design decisions! It wasn’t broken, why did they have to “fix” it?

Adjustments to the laptop pocket are visible in the photos above. The points about the buckles were good ones, too. Here’s the front closure buckle from the older design. You can see that it’s attached at the bottom of the bag’s main top flap, exposing the buckles to the elements as well as repeated bangs and scrapes . . .

These buckles have been moved under the flap this season . . . 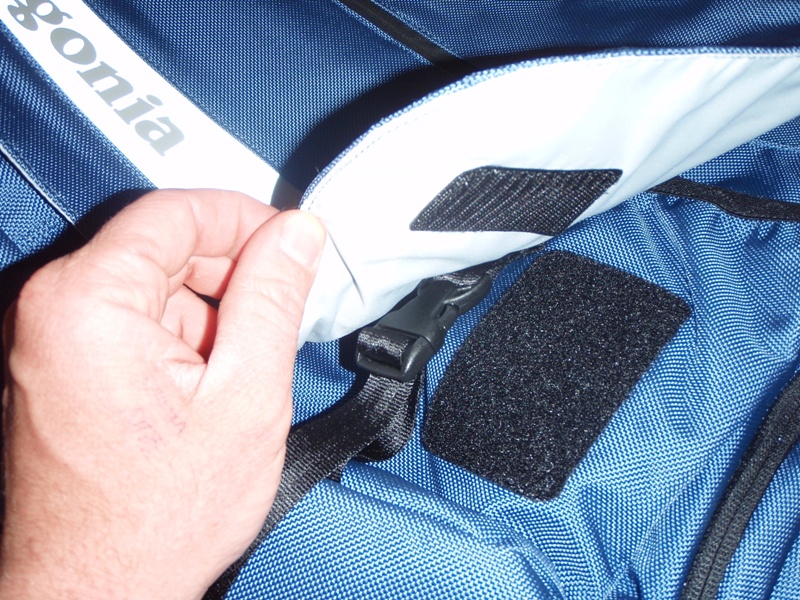 The reflective tape? We fixed that, too. Here’s the older setup: 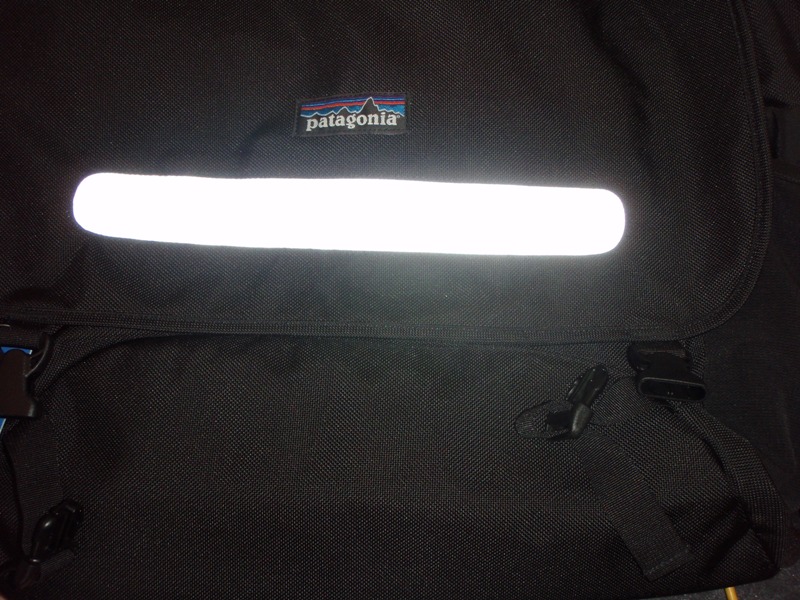 And the newer one, with the reflective strip now longer, lower on the flap, and constructed of sturdier materials: 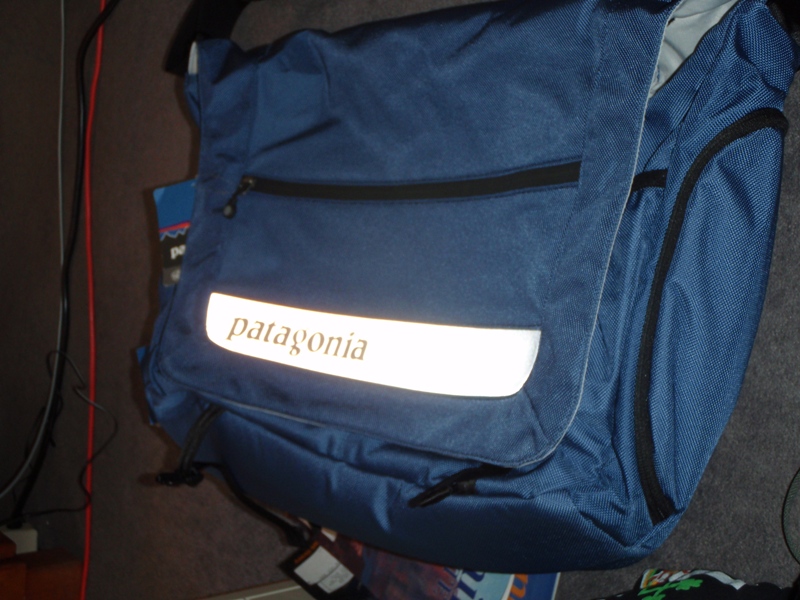 Sometimes the feedback we get is, well . . . it’s unique. It’s entertaining. It stands out in its own way. It’s rife with useful information couched in a telling narrative of one person’s toil and hardship as influenced by their Patagonia gear. A member of the local cycling community had this to tell us about the single-most complaint-stimulating feature of our 2006 model of the Critical Mass–the shoulder strap design:

After intense field-testing of the Patagonia “sack,” the tester is left wondering if the folks at Patagonia ever take this stuff out and play with it in the real world. When commuting on a bicycle the “sack” “schlumps” down around your waist and hangs off your bum in a less-than-comfy or flattering fashion. This functions like a two-lobed cam, with one lobe shoving your diaphragm up into your lungs restricting respiration, while at the same time Lobe #2 sets diligently to the task of extruding your colon and accelerating defecation. It does however manage to take your mind off of traffic.

Tighten the straps you say? Well our tester tried that, only to find that the “sack” is designed for very large people and will not cinch down to fit an obviously calorically deficient male. Our tester did receive a number of glowing comments from the distinguished residents of the river corridor concerning the ravishing green hue of the sack. All things considered our tester gives it a 2 out of 10.

Upon receiving this feedback, a 5′ tall colleague immediate grabbed the then-current Critical Mass and found that, lo!, the bag scraped persistently at the back of her heels. This with all available slack removed from the straps–and while standing.

We fixed that pesky strap. The length is hard to photograph, but here’s a shot of the new adjustment buckle Top – 2006 version, with no way to remove slack from the “closed loop” strap. Bottom – 2008 version with new buckle and strap design allowing user to easily pull slack from strap while wearing the bag. 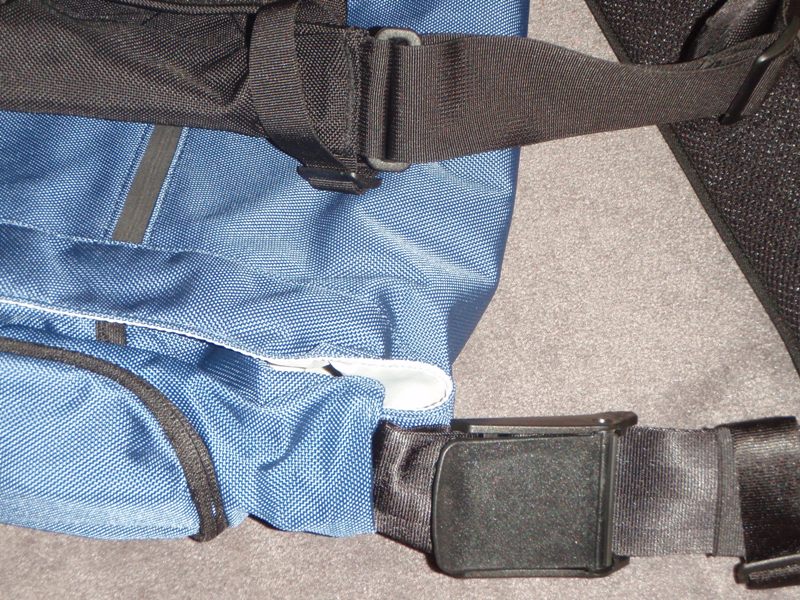 You also told us to fix the mesh pocket design on the side – it was, many folks reported, not secure enough for treasured items and small objects  Top – 2006 version, with open mesh drop-in pocket. Bottom – 2008 version, with zipper closure on pocket to secure items. 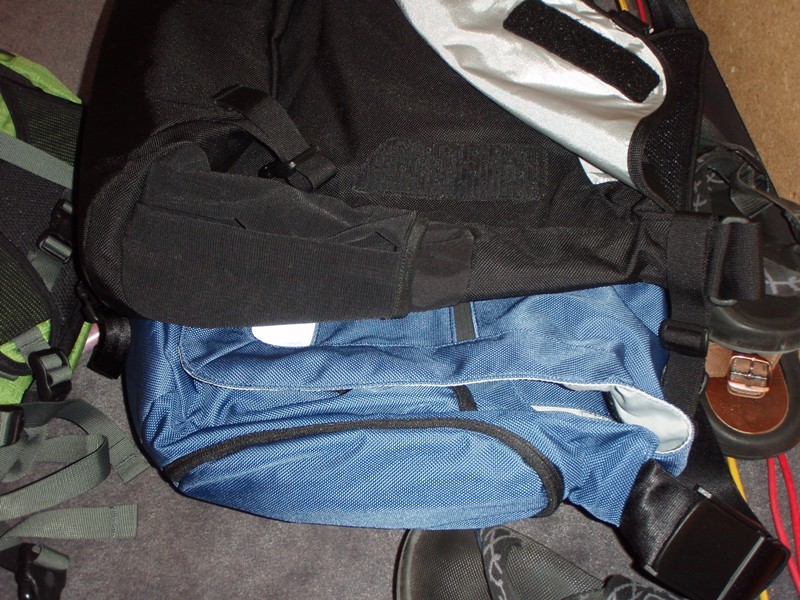 With all the hard work comes a sense of satisfaction knowing our customers’ comments were taken to heart to make a better product. But there’s one piece still missing, the one that will let us rest assured we did a good job of listening to your concerns and making changes. We’re looking for feedback on the 2008 line. That’s where you come in. If you have a Spring 2008 Critical Mass, let us know what you think. We’re dying to find out.