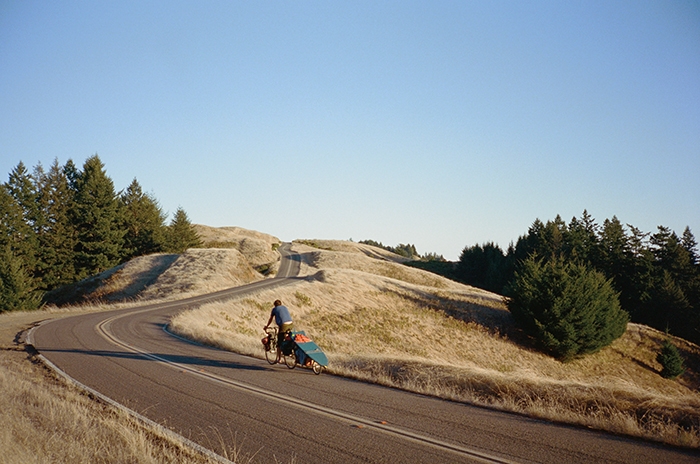 Thumbing through my recently purchased copy of Dan Malloy’s Slow Is Fast paperback, I felt the same elation I had as a teenager buying new vinyl. Listening to Yes’s double album, Tales From Topographic Oceans, I would carefully examine Roger Dean’s ethereal cover art as Jon Anderson and Steve Howe’s highly energized rock transported this Jersey kid to another place. And that’s what creative types do. They grab a hold of you and take you with them. It’s what Dan Malloy does with Slow Is Fast. He creates a beautifully made visual tribute to his native California.

Back in the fall of 2012, Dan and his good friends, Kellen Keene and Kanoa Zimmerman rode touring bikes along 700 coastal miles, documenting their trip with plenty of photographs and interviews. Some pictures are humorous, like the road kill one, where a beanie doll is added to the mix to soften death’s morbidity. Details are everywhere. The book’s front cover has a tiny, red bike-trailer icon and there are pages torn from a calendar scribbled with notes that say four shakas, zero middle fingers and two angry honks – a record of the day’s interaction with motorists.

[“In the last month I have learned more about the people and places along the California coast than I had in 34 years and a thousand car trips.” -Dan Malloy. Photo: Kanoa Zimmerman]

A DVD comes with the book and the thoughtful production, lovely soundtrack and overall good vibe make it a must see. There are different people who show up in the DVD that aren’t featured in the book. Dan, Kellen and Kanoa are fun to watch and their humor is never forced. It’s such a pleasure to be around people like this and you feel better for it. Between visits they surf, and the water scenes lend a meditative quality to the movie. The best thing about the DVD is that it’s cleverly wrapped in a collage of photographs from the trip. When you unfold the wrapper there is a meticulous hand-drawn map of their route done up by artist, Trevor Gordon. 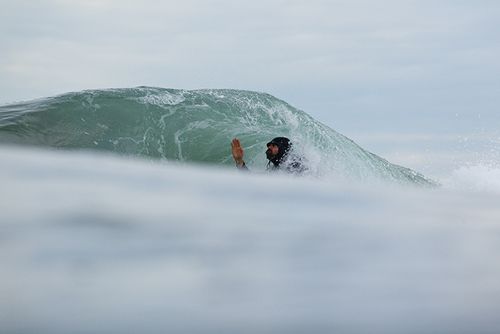 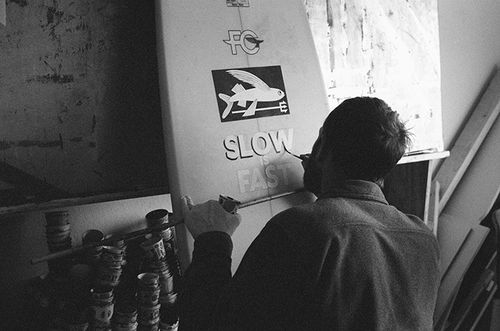 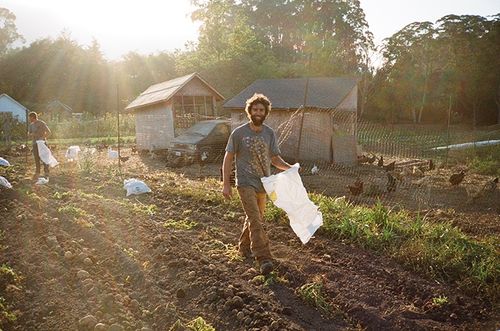 The trip started 100 miles north of San Francisco with just the bare essentials. As they traveled down coast they stopped to surf, work with farmers, and spend time with artists and musicians. They also visited craftspeople and talked to them about their trade. There’s the Santa Cruz surfer kid who expertly makes prehistoric stone tools for the UC Berkeley archeological department, a bladesmith who considers his craft a spiritual practice and, my favorite, a hatchet throwing, jack-of-all trades surfer from Big Sur. These personal encounters make the book pulse with life.

There are photos that illustrate the difference between big and small agriculture. Long rows of tidy crops sprayed with unhealthy chemicals versus a field tended to with wind-chapped hands and a strong body. Growing up, I used to work on my grandparents’ farm just outside Pittsburgh, Pennsylvania. They grew corn, tomatoes and whatever else they thought the neighbors might like. Granddad let me feed the chickens and pigeons, and pick ears of corn from a field next to the pigeon house. I remember walking between the tall rows, the warm, clumpy earth feeling good beneath my bare feet. At a smaller field I collected rhubarb and eggplant for grandmother’s homemade fritters and strawberry rhubarb pie. She made the dough from scratch. 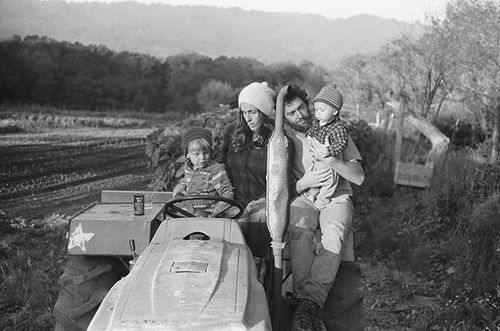 The Murch family pause for a short break on their Gospel Flat Farm in Bolinas. Photo: Kanoa Zimmerman 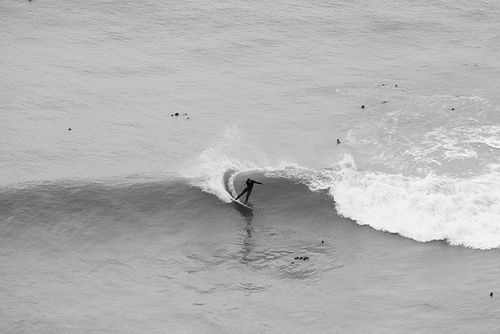 Off the bike for a session near Big Sur. Photo: Kanoa Zimmerman 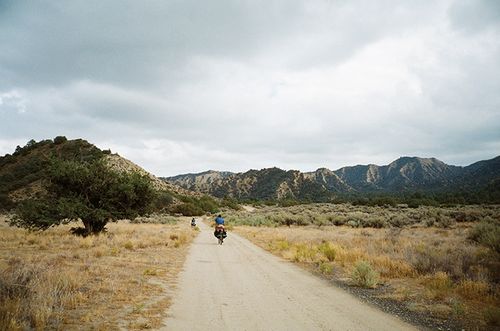 Dan and the guys visit Brenton Kelly and Jan Smith, who run the Quail Springs Permaculture Site and Educational Center in Maricopa. Dan asks them what they like about their jobs and what’s important to them. Brenton says he loves teaching and the interaction he has with students. Jan mentions that soil and light are basic connections to life and that she considers herself a wild critter. She feels that feeding people is the highest form of activism a person can do. Their spirited and noble lifestyle is exemplified in a stanza from Dick Gibford’s poem, While An Eagle Soared Like A Desert Lord.

He was just glad to be
Way out here
Still somewhat free
From pressure to conform
To modern times.

South of Cuyama up in the Sierra Madre, Dan sat in a small cabin with a man, wearing a wide brimmed hat and brightly colored bandana. It was Dick Gibford. He lives in the mountains tending cattle with his horse. Dan listens to Dick talk about the Spanish vaquero and their importance to the ranch culture. The American cowboy learned everything from the vaqueros Dick tells Dan. The vaquero move cattle at a slow pace, treating them with tender care. It takes fortitude and patience to do this kind of work, but it’s what Dick loves to do. 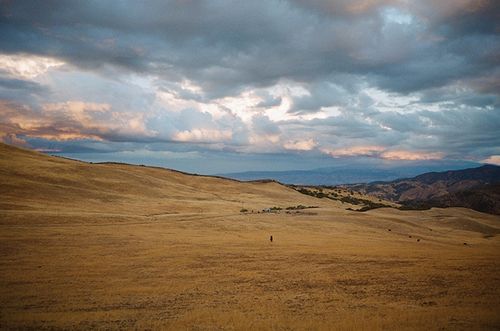 The old cowboy poet and everyone else we meet in the book and DVD grabs a hold of us and takes us with them. It’s what creative types do. We are grateful that Dan, Kellen and Kanoa stopped along the way to meet these folks, taking time to listen to their stories and learn about their unique skills. Dan reminds us that when we slow down and listen, we live. 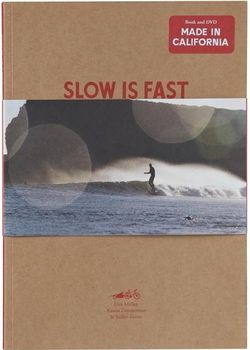 Slow is Fast is now available from Patagonia.com and Patagonia Retail Stores.