“We still talk in terms of conquest. We still haven’t become mature enough to think of ourselves as only a tiny part of a vast and incredible universe. Man’s attitude toward nature is today critically important simply because we have now acquired a fateful power to alter and destroy Nature. But man is a part of nature, and his war against nature is inevitably a war against himself. Now, I truly believe, that we in this generation, must come to terms with nature, and I think we’re challenged as mankind has never been challenged before to prove our maturity and our mastery, not of nature, but of ourselves.”

Before Charles Darwin came along, it was ‘us’ and the ‘animals’. Now, over a century and a half later, most of us acknowledge that we are actually just another species of animal, with as much right to exist as chimpanzees, cats and dogs, mice and insects. The planet doesn’t just belong to us, it belongs to them as well.

A little more difficult to grasp is the concept that we are simply another life-form, along with, not just the other animals but also plants, fungus and bacteria. Again, the planet belongs to them just as much as it belongs to us.

But perhaps the most difficult concept – which is actually just a logical extension of the above – is that we are just one of a large number of elements that make up the planet, including not just life-forms but also the mountains, the oceans and the atmosphere, the waves, the clouds and the storms. Each one of these elements, including ourselves, forms an essential part of the workings of the planet. Each one must have a purpose. Because if it didn’t, evolution would have already removed it. No single element has a right to ‘claim ownership’ of the planet. The planet belongs to itself.

It follows that, if all the elements that make up the planet are called ‘Nature’ then we humans are part of Nature.

But most people still don’t think of it that way. They think of Nature and humanity as two separate entities. Some people are still stuck right back in the pre-Darwinian age, and think of Nature as existing solely for our benefit. This point of view is called anthropocentric – with us in the centre and the world revolving around us.

Others are more reasonable and think of Nature as something we must cherish and look after. It is a finite resource and, if we abuse it, it will bite back and stop supplying us with food, comfort and fun. In other words, the responsibility as planetary stewards has somehow fallen on us. This is very nice, but it still assumes that Nature and humanity are separate.

As we leave pre-Darwinism further and further behind, the concept that we are part of Nature should be easier and easier for people to grasp. But for most people it is becoming more difficult because we are steadily isolating ourselves from our environment. One example of this is the way we are using more and more of our thinking time to understand things that other humans have invented, and less time to understand our surroundings. For example, instead of learning the behaviour of fish, we learn how to program a machine that automatically tells us where the fish are. The software for the machine was written by another human, and the behaviour of the fish has been ‘black-boxed’ and forgotten about.

The less we associate ourselves with Nature and the more we shrink into a man-made world, the more we end up thinking of the other elements as things that should be dominated or controlled by us. Which, of course, sends us back in the direction of pre-Darwinism.

Luckily there are people who understand that we are part of Nature, who see the waves, mountains and weather as our friends, and put them on equal footing. While still giving those elements a healthy respect, they don’t think of them as some kind of unknown, evil force, to be conquered or dominated. Apart from the few remaining hunter-gatherer cultures and some non-western societies, many people who think of Nature that way are those who climb, surf, or do anything else that puts them a bit closer to Nature than your average city-dweller. This is particularly true if what you do is thought of as being a little bit dangerous. 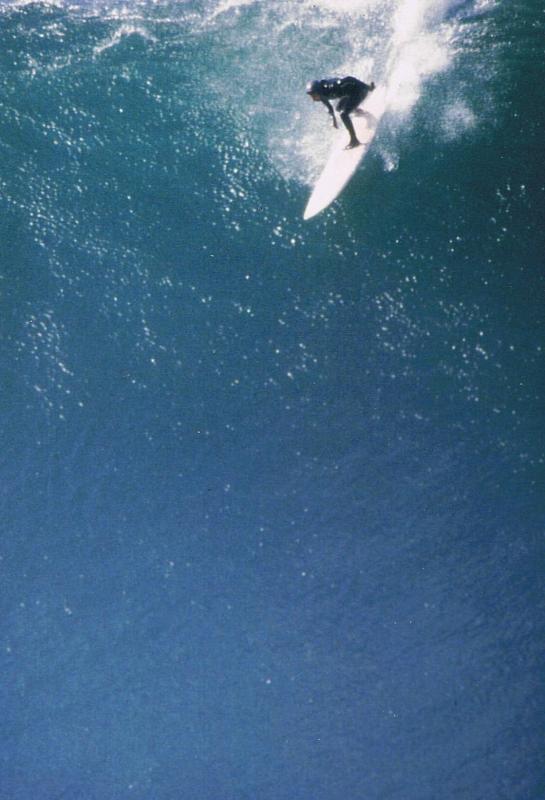 Of course, most people who don’t do these things get the wrong idea. You are typically considered to have a death-wish or to have had some dysfunctional upbringing that has left you with a lack of self-esteem and a need to prove yourself. People see you as pitting yourself against Nature, trying to dominate and gain control of Nature, cheating death. Whatever clichés people use to describe what you do, they always assume you are challenging Nature as a separate entity.

But if you surf or climb, sail, jump or kayak, and especially if you like to go out in, let’s say, slightly more radical than average conditions, you won’t be thinking about the danger or the challenge, you’ll just be enjoying being part of Nature. You’ll be understanding, through direct experience, how we as a species are unavoidably connected to the rest of the planet.

Eric Brymer from Queensland University of Technology and Tonia Gray from the University of Western Sydney (formerly University of Wollongong) in Australia have published a fascinating study based on the notions I’ve just described above.

Brymer and Gray interviewed a large number of people who participated in what the authors themselves defined as ‘extreme sports’. Basically, if you make a mistake the outcome is likely to be serious injury or death. The participants were specially chosen to be slightly older than average (at least 30) and therefore more experienced. The idea was that they had more time to think about why they were doing it, and had left behind years ago the thought of doing it for money or to achieve some goal. Among the interviewees were free-solo climbers, waterfall kayakers and BASE jumpers, one of whom was over 70 years old.

Based on earlier research, the authors hypothesised that the participants’ reasons for doing it would not include wanting to ‘pit themselves against Nature’. Instead, they would be doing it because it made them feel part of Nature, which gave them a deep-rooted sense of satisfaction. However, the participants were never given a clue about that hypothesis or any other preconceived ideas. Instead, they were just told to describe what they felt.

When the authors analysed the interviews, their hypothesis was confirmed, but they also found several other interesting things. For example, there was a distinct lack of referral to the concept of risk or danger. This is in direct contrast to the popular notion that high risk is the chief motivation for doing it. But the participants said that once they were immersed in the task at hand they didn’t feel the danger because they didn’t see their surroundings as a threat. In fact, many felt much safer being out on the mountain or in the ocean than, say, driving on the road or walking around in the city at night.

Another thing that came up was the observation that your surroundings don’t care whether you are there or not. Several of the participants pointed out that you are totally insignificant compared with the power of your surroundings. So the concept of dominating or attaining control is utterly meaningless. Nature is not evil or good, it is simply indifferent. 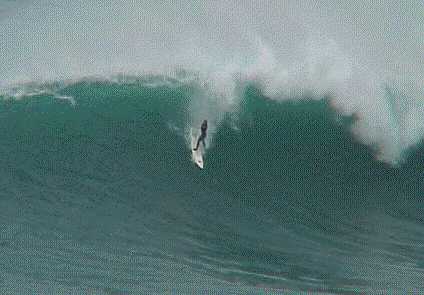 Tony, about to feel the indifference of this wave. Photo: Tony Butt Collection

But perhaps the most interesting thing that came out of the study was the continual referral by the participants to a feeling of having no choice but to blend in with your environment, become part of it, instead of trying to fight against it. One of the best metaphors to describe this is dancing with Nature.

In surfing for example, particularly in bigger-than-normal waves, the idea of dancing with Nature fits very well. Trying to dominate the wave is futile – you have to get to know it, blend in with it, match its every move. If you try something too cocky you will fall. You and the wave are moving together as if you were performing an intimate tango with a long-term partner. It’s a dance, but the wave is leading.

Not just waves, but mountains, waterfalls and rivers are also thought about in this way. Waterfall kayakers talk about ‘going with the flow of the waterfall, and it’s letting me out at the bottom’, and climbers talk about not using ropes because they ‘interfere with the dance-like quality of climbing’.

“Mountaineering is more of a quest for self-fulfilment than a victory over others or over Nature. […] The aim is not to conquer, for mountain climbing is not a conflict between man and nature. The aim is to transcend a previous self by dancing a ‘ballet’ on the crags and precipices and eventually, at very long last, to emerge exhilarated and addicted.”

Lastly, the participants described what is hinted in the quote by Houston above – how their experience gives them an insight into what is going on inside their own minds, allows them to learn about themselves and their interaction with the environment:

“If a conquest exists, it is more of an internal quest for self-knowledge and transcendence. […] The power, uncertainty and potential of death outside of the safety nets of civilization, in the face of immense natural forces, facilitates a personal exploration of the participant’s internal landscape and a transcendence to new forms of awareness.”

In radical situations, we learn a lot about ourselves and how we behave when pushed to the limits. But also, being so close to Nature in this way gives us a special insight, like a window through which we can see ourselves, embedded in Nature itself. We don’t feel that we are the dominant species on this planet; we are just another part of the workings, just like the other animals, the plants, the soil, the rocks, the air, the sea, the waves and everything else.

Here is the original paper if you want to have a look: 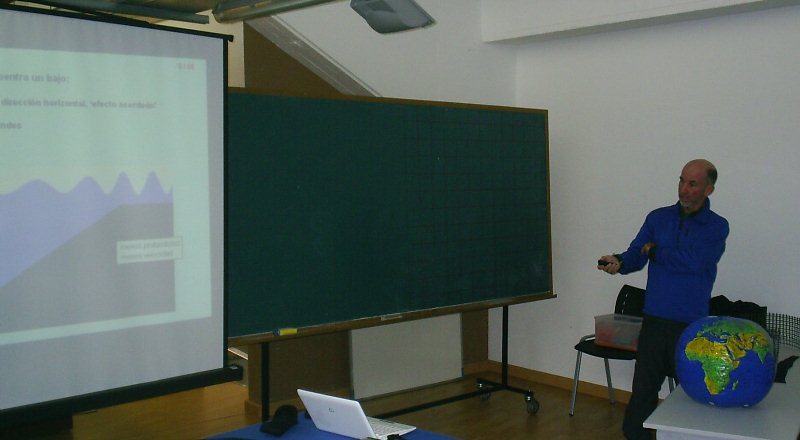 Editor’s note: Dr. Tony makes some great points but make sure you know your limits before seeking the experiences he described. Be smart, train hard and make the connection.

Surf Science: an Introduction to Waves for Surfing