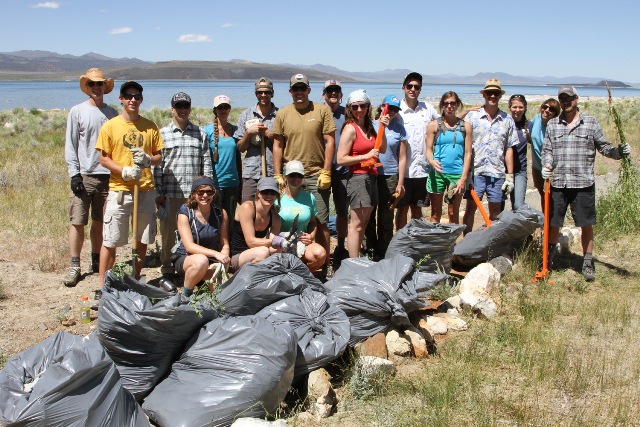 When you spend most of your days sitting at a desk and staring at a computer, it’s easy to get lost in the day to day work of managing orders, inventory and deadlines. We often forget to think about the bigger picture of what brought us to this company, but when it comes down to it, we all work for Patagonia for a reason. It’s not just a job, but an opportunity to be a part of something that is bigger and more important than a pay check. We share passion for nature’s fragile open spaces where we can sit in quiet reflection or pursue self-powered sports, either way these beautiful places are what fill our souls.

Our work group, which services our Patagonia dealers, took a day to give back to the open spaces that we love and to get back in touch with why we are here. We drove from the Reno, Nevada distribution center, two and a half hours south to a lake that is as bizarre as its name, Mono Lake. Few of us had spent much time here, but we all had driven by on the 395 and admired its beauty from afar.

The Mono Lake Committee met us at Navy Beach and gave us an educational tour of the incredible ecosystem on the lake’s perimeter. It was surprising to learn that it is among the oldest lakes in North America and has one of the most productive ecosystems in the world. Every animal has a purpose and is crucial in keeping the delicate balance of Mono Lake. All the more reason to do our part to maintain this natural wonder.

After the tour it was time to get our hands dirty and battle some invasive species; more commonly known as pulling weeds. The intruder was Sweet Clover and its removal is vital to the survival of native plants because it uses more than its share of the limited water sources. They were some of the strongest most difficult weeds we’d ever encountered. There was nothing more rewarding than when the Sweet Clover finally broke free from the earth.  Lots of grunting and yelling went on as we got our aggression out pulling on these weeds that did not want to go. We pulled eight garbage bags full of sweet clover and were stoked to see the difference we had made. 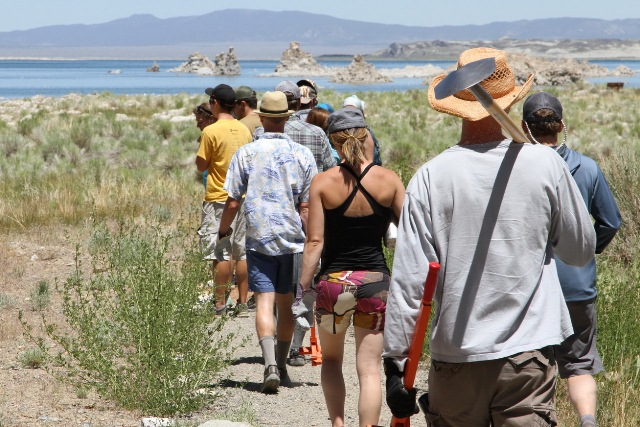 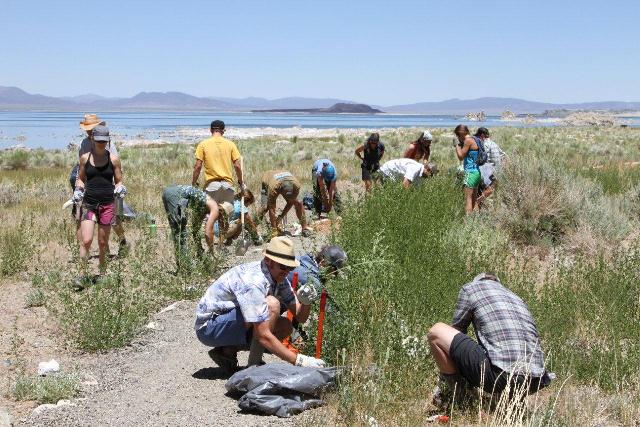 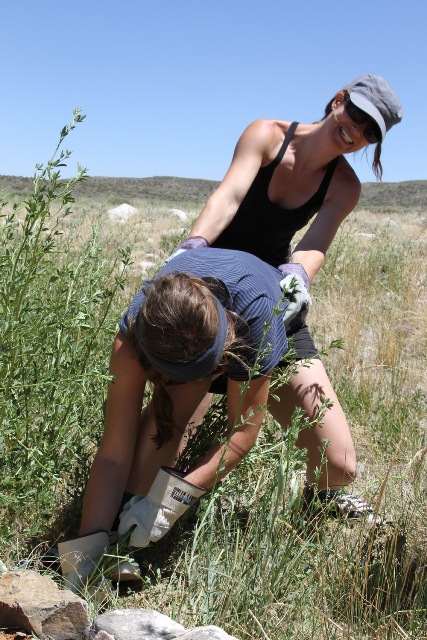 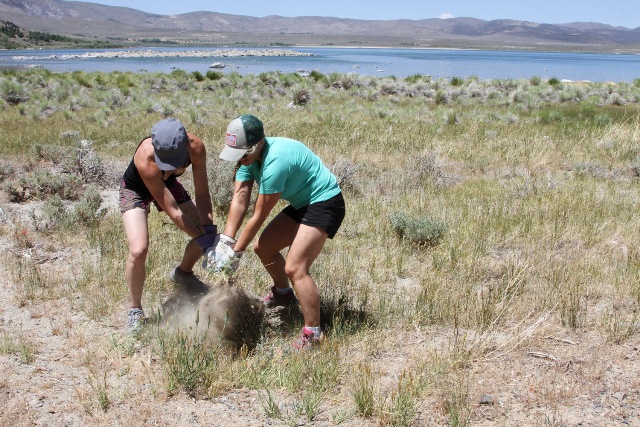 The hot air and hard work had worn us all out so we headed to the Mono Lake Committee headquarters in Lee Vining to check it out. It was here that we learned the deeper story of Mono Lake and the struggle that has been going on for decades. Mono Lake was very close to disappearing into a dry dusty lake bed.

Have you ever heard of Owen’s Lake? If you have, it’s most likely because of the devastating story that goes along with it, and if you haven’t, it’s probably because it no longer exists. Owen’s Lake was once located in the eastern Sierra near the town of Lone Pine. In 1924 the Owen’s River that fed the lake was diverted to the Los Angeles Aqueduct, causing the lake to dry up. What was once a very important feeding and resting stop for millions of water birds each year, is now a health hazard to nearby residents due to the high alkali dust that comes off the lake bed.

Mono Lake was in threat of the same devastating outcome when the Los Angeles Department of Water and Power (LADWP) set its sights on Mono Lake as their next source of water. The LADWP bought the water rights in the area and began diverting the streams and rivers that feed Mono Lake. Within a matter of a few years Mono Lake had been reduced to half its size. With the efforts of passionate people, the Mono Lake Committee was created. Together with the Audubon Society they took the LADWP to court and were able to win a monumental case that put regulations on lake levels and ensured a future for Mono Lake.

At the end of the day this saline lake had a whole new significance to our group. What many of us had once thought of as a mysterious body of water, was now viewed as a vital part of our ecosystem in the Sierra Nevada and beyond. We finished off our field day with a swim in Gull Lake and camping in a grove of Aspens. Monday morning was different than usual. We all were a little more aware, more inspired and psyched to be a part of it all. Thanks to Gregor for organizing, the Mono Lake Committee for showing us a new beauty and to Patagonia for encouraging environmental action!

Laurel Winterbourne has been with Patagonia for three years and finds her passion in writing, the environment and outdoor adventures.  She grew up surfing in Encinitas CA and now lives on Donner Lake in Truckee, CA and has made the Sierra her adventure playground.

Laurel Winterbourne was an employee at Patagonia for five years until she joined her husband, Trevor Clark, in the pursuit of creative imagery. She finds her passion in writing, the environment and outdoor adventures. Laurel grew up surfing in Encinitas, California, now lives on Donner Lake in Truckee and has made the Sierra her playground.