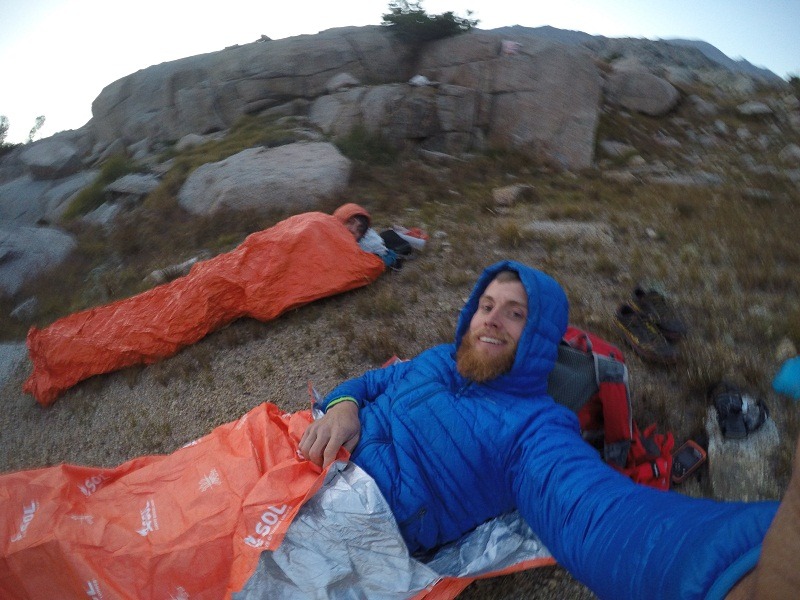 There is something unnerving about waking up shivering. I rolled over and did a dozen or so push-ups in an attempt to get warm enough to fall back asleep. My commotion led to Cody pressing the light on his watch.

“I’ve been cold for a while,” he replied.

With that we crawled out of what we dubbed our Disaster Style Sleep Systems—emergency mylar bivy sacks, down pants and down jackets—and got ready to start running again. We were on the second morning of an attempt to cover the 195-mile Sierra High Route as fast as possible and we had been getting our butts kicked.

Above: Rise and shine. All photos: Luke Nelson

We had both accepted the fact that trying to do a route that covers almost 200 miles of the High Sierra, only occasionally following a trail and mostly above 9,500 feet, would be really hard. Add in the need to carry all of our own supplies for the anticipated 5–6 days out on the trail and it quickly became a very daunting task. The likelihood of us actually succeeding was going to be low.

The initial 6,000-foot trail climb went by quickly but as we ventured off trail onto the Sierra High Route we quickly discovered that the travel, despite our intentions, would be slow. The terrain was very technical with rocky granite slabs and scree dominating the way. Smoke from the nearby Rough Fire in Kings Canyon filled the air and made the whole place feel a little eerie. Despite the more difficult terrain and smoky air, we still made decent progress. 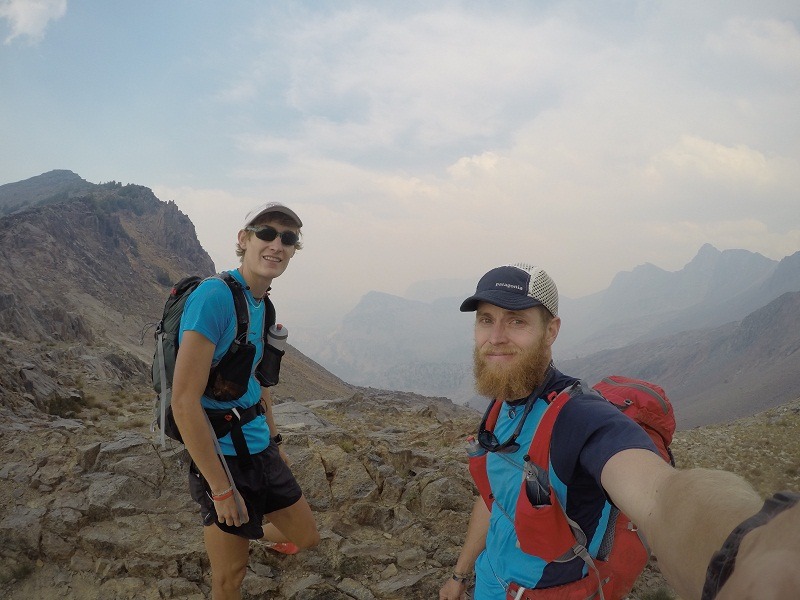 The early miles were closest to the Rough Fire. The smoke was oppressive at times. 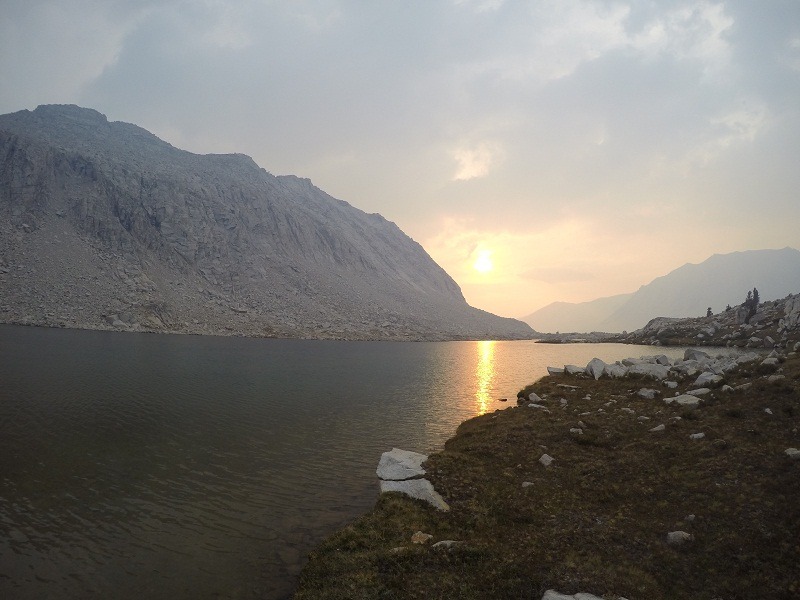 Smoke on the water.

As day turned to night we found ourselves about 10 miles behind our optimistic itinerary. Our bodies were in far worse condition than we had hoped and our psych was starting to unravel. As we dug headlamps out of our packs we discussed our strategy for the night. We decided to push through a section of the John Muir Trail to where the next off-trail section would begin. We stopped just after 1 a.m., pulled out our sleep kits and laid in the dirt for a couple of hours.

By the time the sun came up we had already been on the move for a couple of hours. Route finding in the dark was tedious and slow and the sun was a welcome sight. At the top of Potluck Pass we sat down behind a rock, out of the wind, and enjoyed an energy bar as the sun kissed our faces. Just a few hours later we cursed the sun as we traveled above the tree line. With nowhere to hide from the intense rays, it burned our skin. 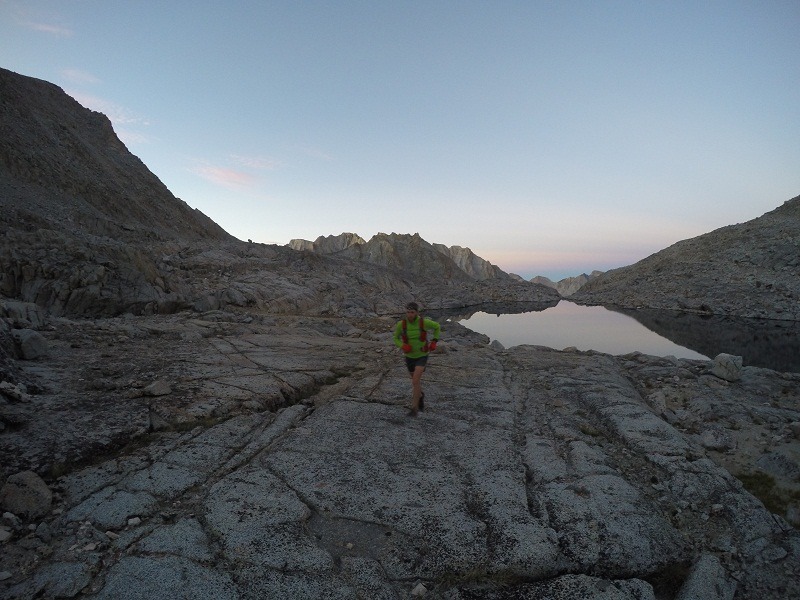 Early miles with the Evolution Group as a backdrop. 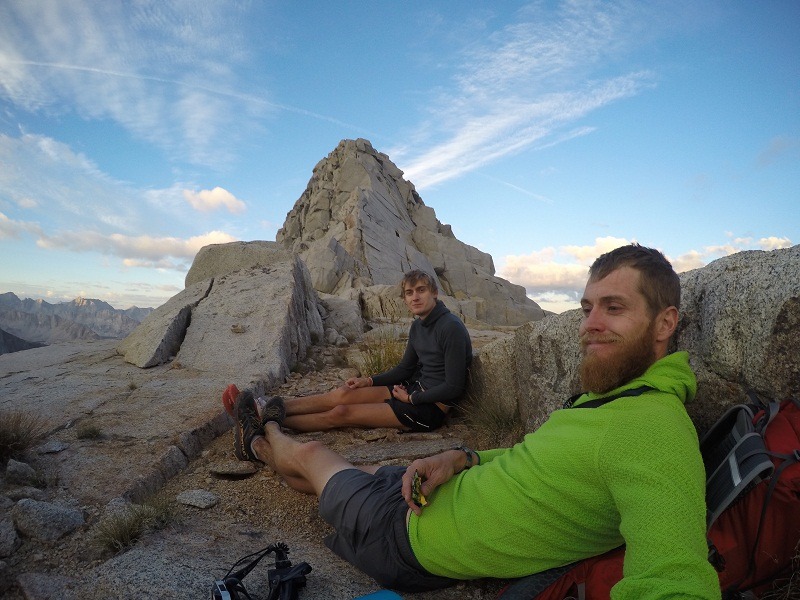 Nearly every pass on the SHR offers incredible views in every direction and the perfect place to sit and enjoy an energy bar.

After a long off-trail section, we rejoined the John Muir Trail for the ascent up Muir Pass. It was strange to see so many backpackers after being alone for nearly 20 hours. The increase in traffic distracted our minds from the fact that we continued to fall further behind schedule. It was a painful march: shoulders ached from running with heavy packs, legs felt like Jello, blisters formed and the pace was far too slow. Long adventures often require a version of fun where there is no actual fun but the promise of telling a fun story after the fact. Often referred to as Type III fun, at this point it was three-plus.

After hours of marching along the JMT, I convinced Cody to sit down next to a lake where we had brief discussion about our situation. We were way behind schedule and falling further back by the mile. The fun had evaporated and our bodies were not tolerating the whooping they were getting. We decided to take a swim and put our speed objectives on the shelf. 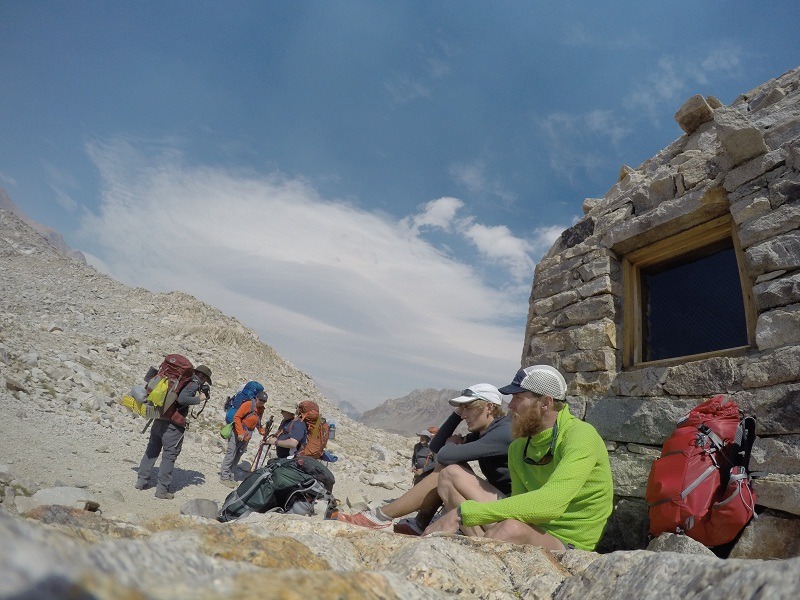 Contemplating the pros and cons of Disaster Style travel at the Muir Hut. 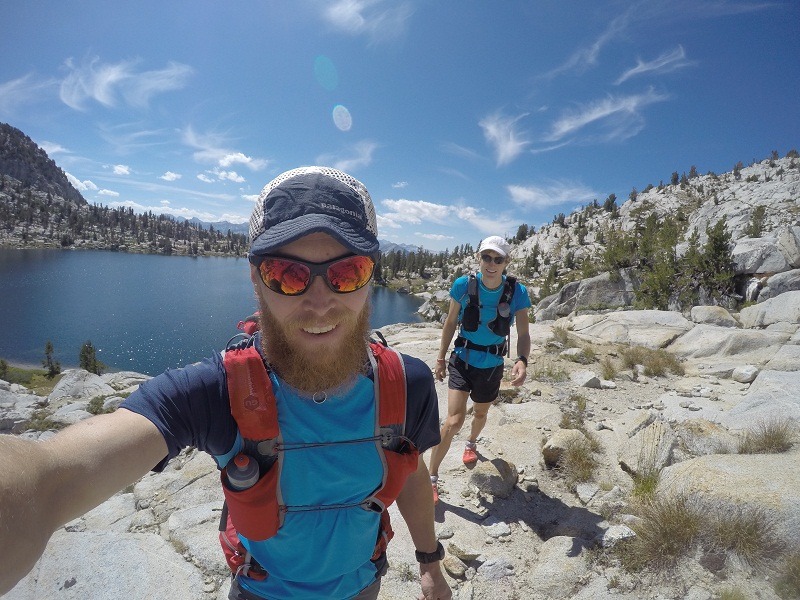 With a recalibration of goals there were smiles for miles.

The dip in the lake and the change in mindset were incredibly refreshing. It felt, almost instantly, as though some sort of fun had returned to the trip. We chose to no longer force ourselves to meet a time objective and doubted whether we would even continue forward for the rest of the route. We took more pictures and stopped more often to take in the desolate beauty of the Evolution Valley.

By the time we ascended onto the Darwin Bench it was close to dark and we decided to stop and sleep a few hours before pressing on. Once again we pulled out the Disaster Sleep Systems and settled in for the night. A couple of hours later I was doing pushing ups and it was time to go. Despite how wrecked my body felt I had a lightness in my step. We took time to savor the sunrise over Mount Darwin before dropping over the col towards Humphreys Basin. A few hours later we examined dusty bear tracks along the side of a dirt road while hoping for a car to pass so we could hitch a ride to town. 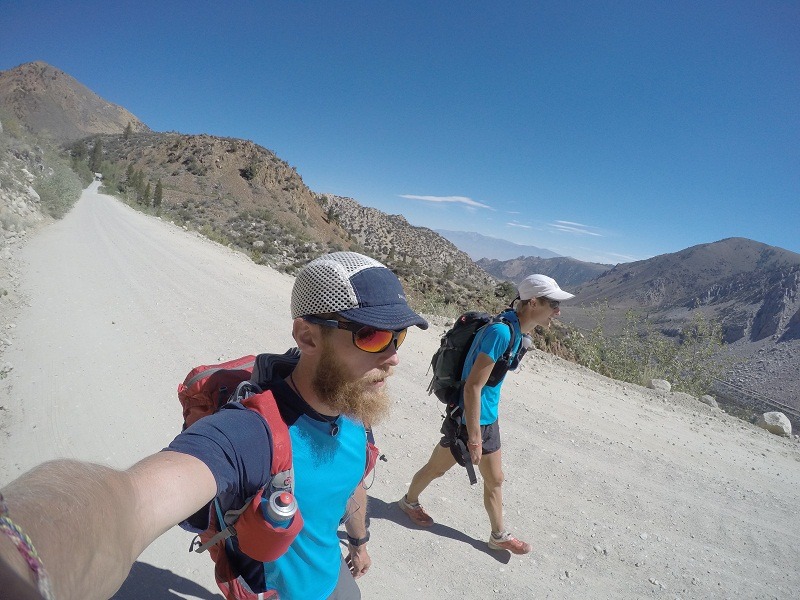 There were not many cars on the road out, but we got lucky after a couple of miles. 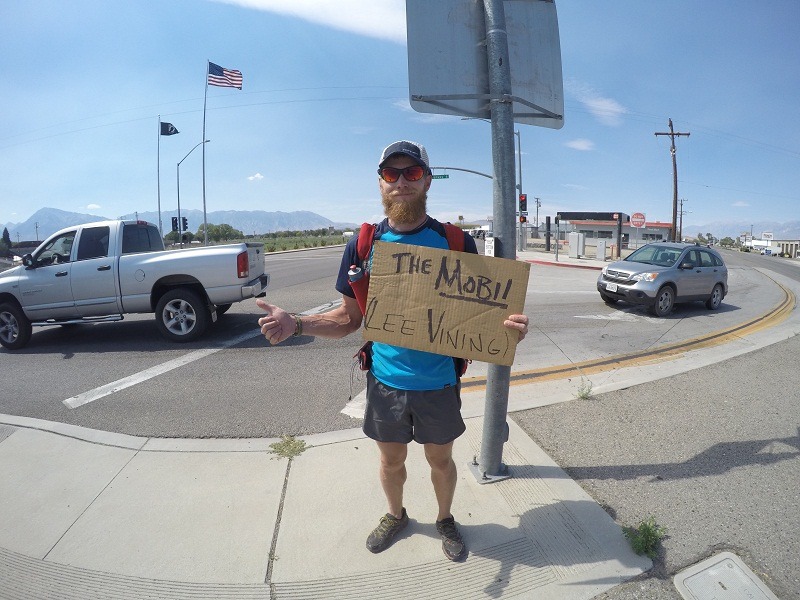 When hitchhiking in Bishop it helps to let people know exactly where you are going. Everyone knows about the Mobil. Photo: Cody Lind

Our trip in the High Sierra may be deemed a failure because we didn’t reach our predetermined objectives. If that is the case, I celebrate failure. We did not cover the entire Sierra High Route. We were unprepared for the terrain and under experienced in multi-day travel. But we certainly enjoyed moving quickly through the High Sierra and learned many valuable lessons. Even before hitching out to Bishop we were scheming about the changes we would make and potential dates to come back next year. This was only the first chapter in the book about our experiences with the Sierra High Route which, by the way, I hope is not a terribly long book. 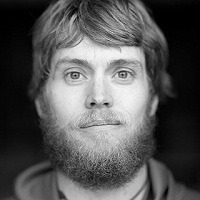 Luke Nelson spent his childhood wandering the mountains, but it wasn’t until he agreed to a really bad bet, which involved a marathon, that he found running. Now, Luke relies on long mountain runs for his everyday connection to the natural world. He strives to maximize each hour by balancing his time as a physician assistant, race director, husband and father. You can read more from Luke on his blog, Challenge of Balance.

Luke spent his childhood wandering the mountains. These days his time in the wild is spent running. Not wanting to be confined by the rules of racing, he prefers meandering lesser-known routes and rowdy mountain linkups as a way to stay connected to nature. Being connected with the outdoors on a daily basis has inspired him to be an activist and to speak up for the planet. He strives to maximize each hour by balancing his time as an activist, physician assistant, race director, husband and father.