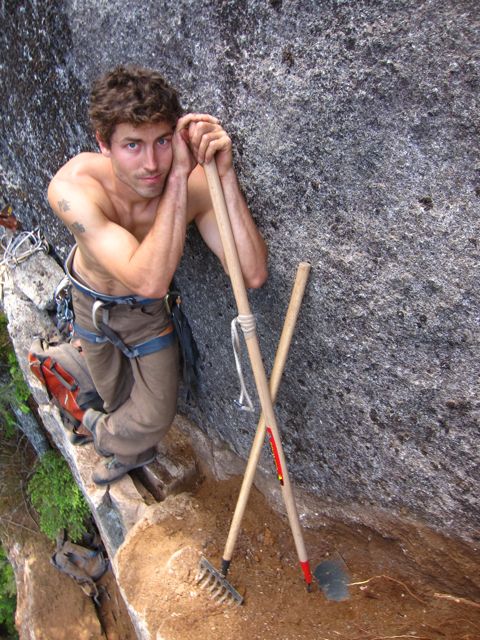 One of the coolest things about climbing is how everyone can get their fix – whether you climb 5.5 or 5.14, we can all find that same feeling, that same immersion, focus and engagement at our own levels. This summer, Patagonia rock climbing ambassador Sonnie Trotter devoted himself to two, long new routes with very different difficulties. Here, he shares the experiences.

"This is the last route I put up this summer, I promise," I told Lydia, my girlfriend. I stared into her beautiful eyes and she smiled back as a twig fell out of my hair. She’d been up with me on the first recon of the route. That was enough for her. She has balance.

“Seriously, baby, the climbing on the Butt Face is gonna be really good.” I said, looking down and scratching dirt out of my ear. “Total classic.”

She giggled as we both watched a leaf fall from my nappy head and float to the floor.

Well, I guess I knew I was lying about the “last route” part, because every time I was up there I looked across the South Gully and saw this clean shield of rock: steep, blank, unbelievable positioning…

[Sonnie and a hoe, taking five while establishing a soon-to-be classic moderate. Photo courtesy of Ben Moon and Sonnie Trotter.]

Establishing new routes is hard work. Especially in Squamish, B.C., where I live, and where mud and moss and dirt cake the rock. And especially when, as with the Butt Face, the route begins more than halfway up the 1,200-foot Stawamus Chief. Just getting there is a bitch, let alone lugging the required gear: Hundreds of meters of static ropes, rakes, shovels, brooms, hammer, drill, bolts, gallons of water, shoes, boots, a full rack of gear, the list goes on. 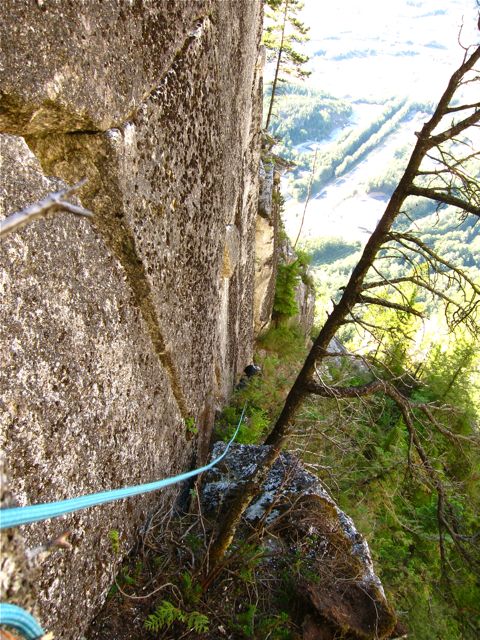 [Ben Moon pushes through the brush while working the Butt Face. Photo courtesy of Ben Moon and Sonnie Trotter.]

And once you get there, after hours of hiking, the route won't clean itself. You gotta get down and dirty, scrubbing your little heart out, every inch of it, because if you don’t, who will? You gotta pull the moves, jug the lines, and take time to breathe some fresh air, if only to remind yourself why you're doing all of this.

At night you come home, covered from head to toe in wet earth. Little rocks fall from your nappy mop in the shower. Then you pretend to stretch, but you're too tired, you just tighten-up more while drinking beer and fall asleep so you can do it again the next day. It's harder on the body than I expected. But my mind won't relax until it's done.

This summer I established two new routes that both lead to the summit of the Chief. One I did for the community, the other I did for myself.

The first was a variation finish to the Squamish Buttress, an über-classic 5.10c established by the restless legend Fred Beckey in 1959. The only problem with this climb is that it has a 50-foot section of steep 5.10c, while the rest of the route is 5.8 and 5.9. This often creates a bottleneck on the big cliff, and some anxiety for moderate leaders.

While hiking around the area and talking with friends, I decided to investigate a potential ledge system that appeared to branch-off and link to the top, with much easier climbing.

After one day of climbing it with Lydia, I spent another five consecutive days, along with my selfless friend Ben Moon, from Portland, doing some extremely hard work. The Squamish Buttress – North Face Variation was born. The new line – now simply known as the Butt Face – goes free and clean at 5.9. It's officially the easiest line to the summit of the great granite monolith. It was as much fun as I've ever had up there, breaking our backs and playing in the dirt, all the while believing that our efforts were some sort of community service act. True it was. The climb has since seen hundreds of ascents and is cleaner than it's ever been. I have never been so proud of a FA in my life. 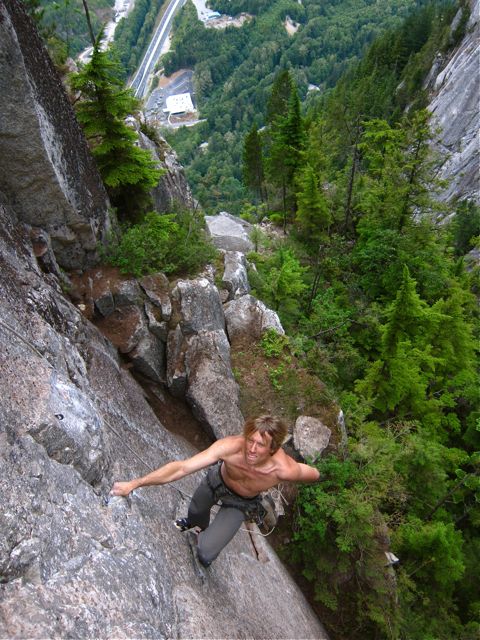 [Ben, face caked in mud, soloing out after another 10-hour day of work on the Butt Face. Photo courtesy of Ben Moon and Sonnie Trotter.]

Not a week later, across the South Gully opposite the Butt Face, I began an equal effort on my "other" project, a line that has yet to see a single repeat. The Intrepid Traverse crosses the south-facing Prow Wall, steep and clean, and I imagined it, how it might come together, every time we climbed on the Butt Face. And every time I hung ropes on Intrepid, I could look back across and see climbers moving up the Butt Face, hear their exuberant shouts and partners encouraging one other. I once counted 10 parties in a single afternoon.

After 12 days of work, and on an evening so magical and crisp, I free-climbed the Intrepid Traverse with my good friend Jeremy Blumel. It goes at 5.13c, and is my other proudest of first ascents. I don't know why, perhaps because of the quality of the rock, the position of the line, and the vision it required to make it all connect. It was sort of a miracle for me, and the experience of sending it clean, in a push, on such a beautiful day only rooted itself deeper into me. 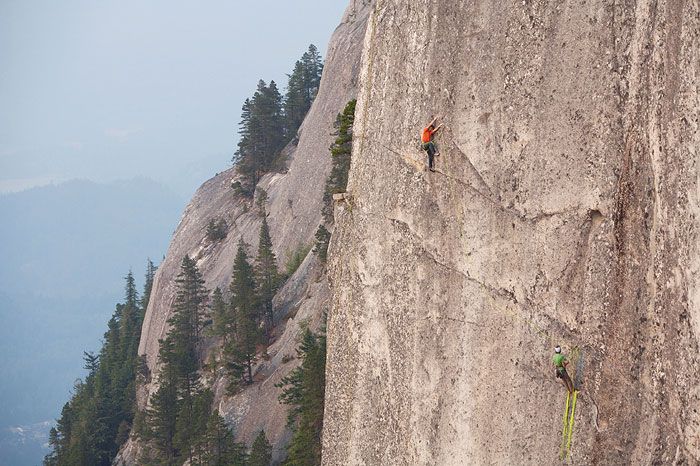 It's funny how an experience can change your life, even if just in your own mind, so subtly, a single moment you look back on and recall every detail. I still remember the stillness that evening, the exhilarating exposure beneath my feet, the calm skies, the swirling black ravens, the sound of my breath, the sound of Jeremy's encouragement, the orange setting sun, the way the granite crystals grabbed my skin and ensured me I wasn't falling off, not today.

And just as sweet, at that very moment I knew that on our other route across the gully, fellow climbers were feeling the exact same thing. 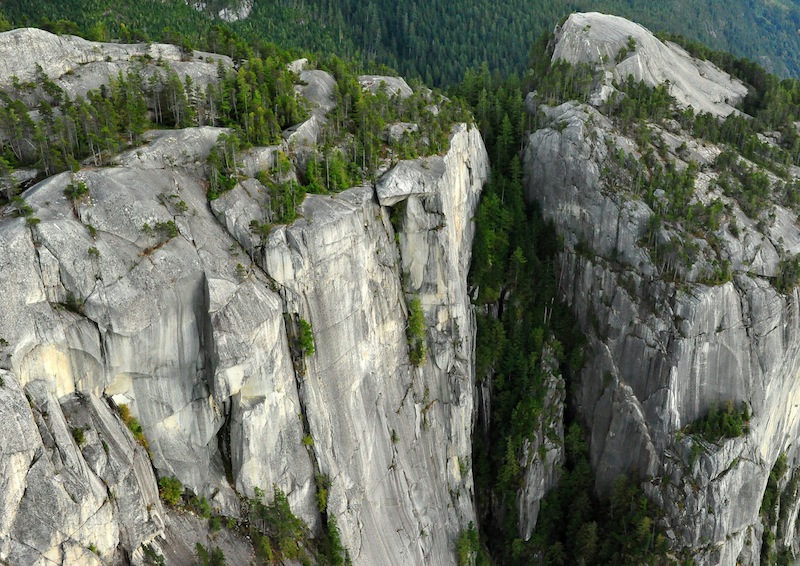 [The two walls: on the left, the Prow Wall, home to the Intrepid Traverse; on the right, the Squamish Buttress, with the Butt Face variation ascending the blunt arête. The obvious South Gully separates the two walls. Photo: Scott Pick]

To keep up with Sonnie on his personal blog, head over to sonnietrotter.com and click What's New.