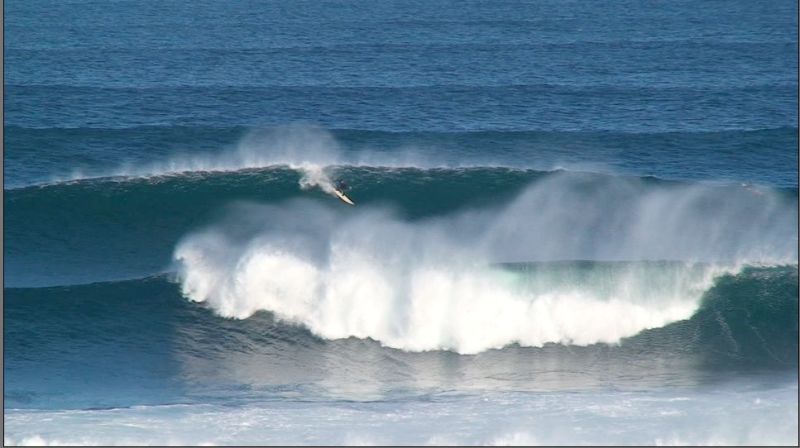 One would think that the early nineties would be a relatively late stage to discover new surf in Europe. When I set off from Cornwall to Galicia in November 1992 in a van with two mates, all we were expecting to do was satisfy our own curiosity. Nobody we had spoken to in the UK seemed to know about any surf further west than Rodiles but we were sure there would be a thriving surf community west of there. It was just that we had not heard about it. We would start in Baiona, just north of the Portuguese border, and work our way around the coast. We had the whole winter.

Needless to say, with three people in a small van for several months, rain every day and nothing to do between surfs, and a van plagued with mechanical problems, it was a fairly hardcore trip. In the end, the trip only worked through strict military-like discipline and co-operation between team members.

After spending the first two months scouring the coast of Galicia for waves with a fine-toothed comb, all we found were huge close-outs on sandbars half a kilometre offshore. We endured day after day of rain, endless coffees in smoke-filled bars and conversations with crazed Galician fishermen, all of whom warned us not to go in the water along this treacherous part of coast, aptly named La Costa de la Muerte.

[Above: The author rides a different wave on a different day in northern Spain. Photo courtesy of Tony Butt]

One morning, we decided that Galicia was not a good place for surfing in the winter. The harsh granite topography is somewhat self-defeating as far as good surfing waves are concerned. It picks up a huge amount of swell and the waves get really big. But for that same reason, all the flat reef-making material, like limestone, was washed away millions of years ago. Almost every day throughout that winter there were waves of six, eight, ten and twelve foot, but not one good reef for them to break on. Of course, in Galicia there are many sheltered beaches facing out of the main swell and wind directions. On that trip, we somehow failed to find them amongst the maze of tiny side-roads and complete lack of signposts. We decided this part of the coast should be surfed in the summer not in the winter, so we headed away east towards our eventual end-point, Mundaka.

Just before hitting Asturias we came across a rather flat section of north-east facing coastline. The first wave we were confronted with here was a twelve-foot peak, heaving up and sucking dry on the reef, barely a stone’s throw from the road. We thought the locals would probably have special boards to surf waves like this. This was a bit beyond our capabilities, so we kept driving around the corner, where we found a much more manageable lefthander. After carefully parking the van some distance away and securing it with a multitude of padlocks, we went out. The whole time we were wondering when the locals would turn up, whether they would be friendly and civilised or whether they would be hostile and aggressive. They never came.

Bewildered, we drove into town and had lunch. On the way back we passed several spots with good potential. One in particular caught our eye – a short, right-hand peak with a bowling inside section, mechanically perfect, steep, powerful and shallow, but predictable. By now we were experts at finding original names for spots, and this one we called the ‘Hollow Right’. It turned out to be the gem of the trip. We ended up surfing the Hollow Right for two weeks until it went flat. The locals never turned up.

We later learned that this reef was called El Berberecho (cockle) because people often go out there to collect cockles. After that trip we went back whenever we could. For the next five years we had some classic sessions, all to ourselves. We wondered why it remained empty all that time. Perhaps it was because conditions change extremely quickly there – highly incongruent with the slow pace of life in this part of the world. Maybe it was because nobody thought it was any good, because there was never anybody out there, a kind of self-fulfilling prophesy. Whatever the reason, we had our own private surf spot for five years.

Nowdays, things have changed at the Hollow Right. Every time it works there are twenty hungry locals swarming around the tight take-off area. They even call it a different name now – La Machacona – ‘The Crusher’, a rather ugly name, not exactly in tune with the mellow Galician lifestyle, but that’s up to them.

Perhaps it is good that they have changed the name. The magic of El Berberecho is no more. Those crystal-clean, empty tubes only exist in my and two of my friends’ memories. Even though El Berberecho has been crushed by La Machacona, nobody can take away that memory.

Dr. Tony Butt has been surfing since 1972 and lives in the Basque Country. He is an expert on the scientific aspects of surfing, has published over 30 articles in European surfing magazines, and is about to publish a book on surf science. He is also highly involved in coastal research and continues to work as a Postdoctoral Research Fellow for the University of Plymouth. He holds a BSc in Ocean Science and a PhD in Physical Oceanography. For more from Tony, check out his online publication, A Surfer's Guide to Sustainability.