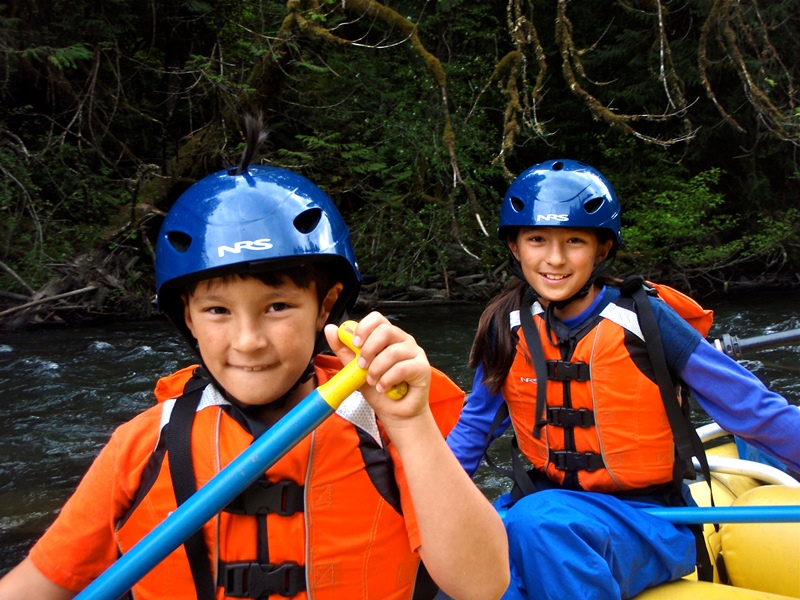 The kids and I decided to squeeze in one last, close-to-home, weekday excursion before school started, so we headed over to the newly dam-free Elwha River for a little float. The last piece of the upper dam was removed last week, so it seemed like a good time to go see what had changed since I was there earlier this summer. And I wanted the kids to experience a river being reborn. That’s Weston and Skyla starting out, courtesy of our friends at Olympic Raft & Kayak.

The first thing we noticed was the amazing clarity of the water. Opponents of the dam removal predicted the river would be constantly dirty with sediment for years to come, and yet, even just days after blowing the last of the upper dam, we had at least eight feet of gorgeous, blue-green-tinted visibility. Even more surprising, through that clear water, we saw hundreds of Chinook salmon migrating, staging and spawning. Their motor-boat wakes peeled away from the raft in the riffles, and we could see them spawning in every tailout and flat. There were fish everywhere. The river bottom, again contrary to what many predicted, was made up of clean, large cobble and gravel rather than soft silt and sand. Perfect spawning conditions. In the picture above, the lighter-colored bottom areas are Chinook salmon nests, or redds, where the spawning fish have turned over stones. The sheer quantity of fish thrilled us all, and knowing there had been no salmon in this part of river at all for 100 years made it even more uplifting. 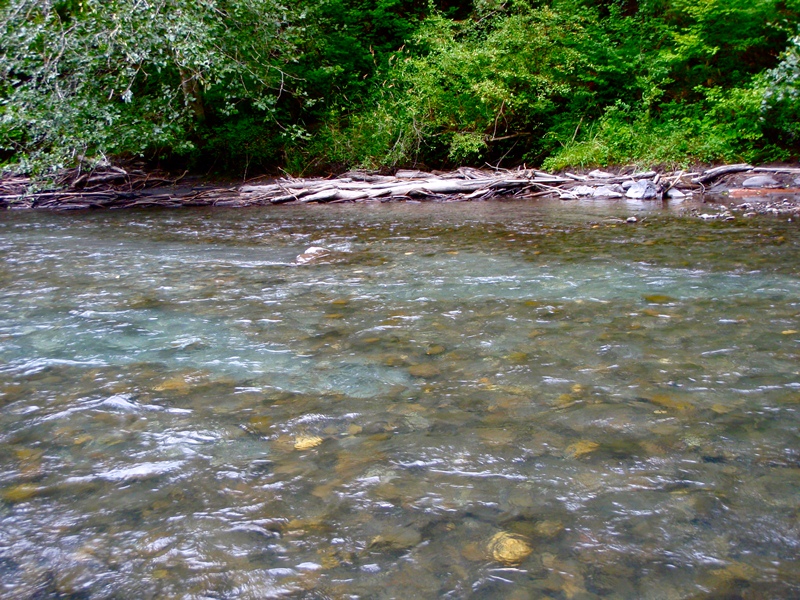 Here, the kids are standing on what used to be the bottom of Lake Aldwell, just above the lower dam site. As you can see, the river is carving a new path, with all the natural riffles, runs and pools one would expect. The line of low vegetation to the right is part of the restoration effort, a mass of native plants put in place to (hopefully) prevent invasive species from taking hold. Large woody debris, key juvenile salmon habitat, is piling up along the banks and channels throughout the river system. 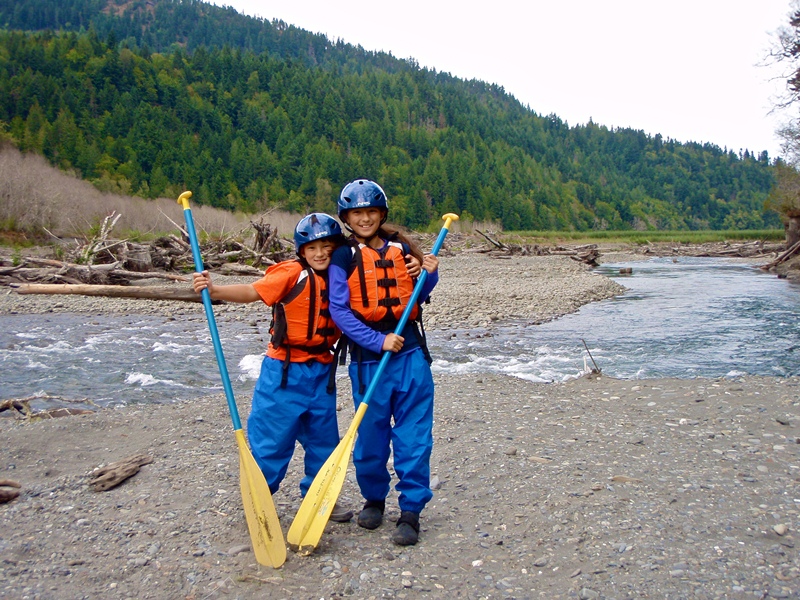 After our float, we drove down to where the Elwha meets the Strait of Juan de Fuca. As we walked toward the river mouth, there were flood ponds and tide pools scattered throughout the new delta. We stopped on the banks of one little pond and watched uncountable numbers of juvenile salmon feeding on the surface. Rings of rising fish formed and overlapped as tiny, silvery salmon flew into the air chasing insects. 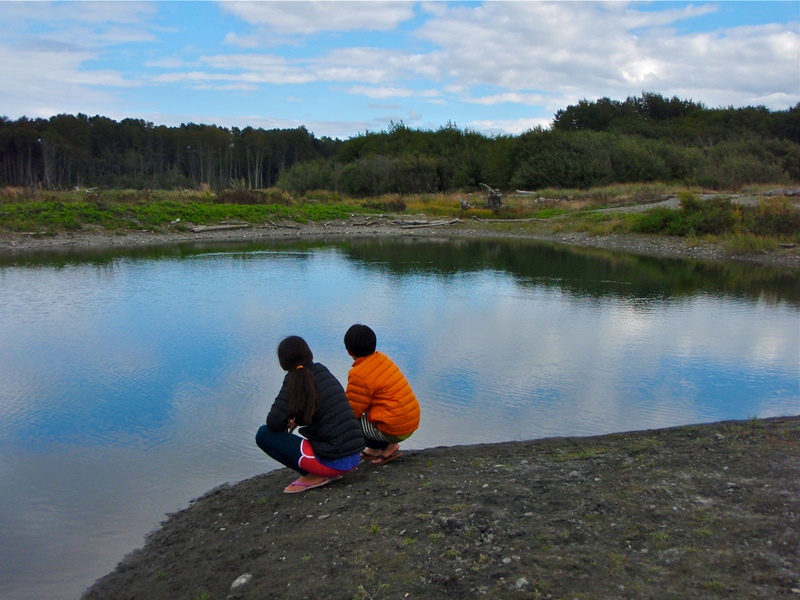 The delta has grown even larger since I was there with my good friend Matt Stoecker back in July. What used to be a sediment-starved, single channel pouring into the Strait is now a complex maze of wetlands, sandbars and tide pools stretching across acres and acres of new land. This, the biologists tell us, is the exact habitat juvenile salmon need during the critical time when they’re adjusting to saltwater. As the rising tide came in, it formed streams pouring into the little ponds, and we watched the baby salmon move toward the current and slide out into the sea. I grew up during a time when most of our salmon runs, not to mention other natural resources, dwindled away year after year; for my kids to be here now, witnessing the process of something getting better, lifts my spirits in ways I can’t begin to express. The Elwha is a river again. The salmon are back. 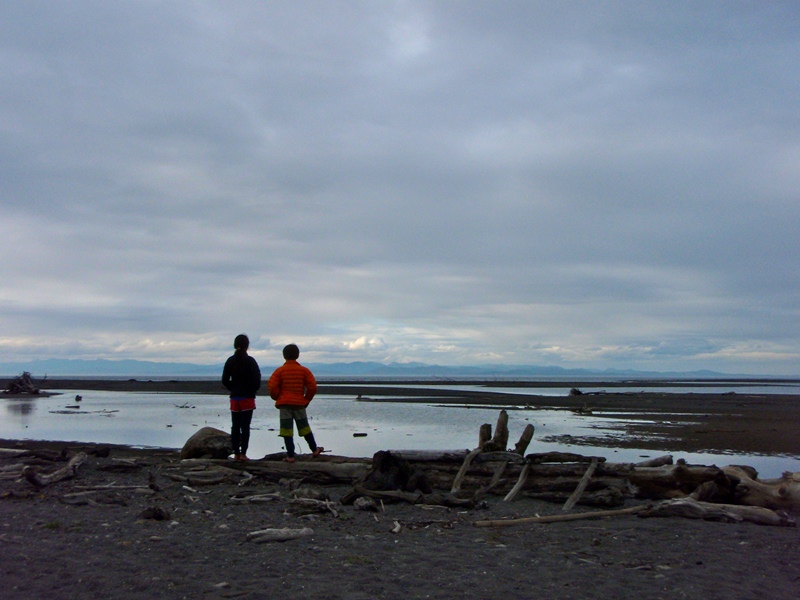 All photos by Dylan Tomine.

Dylan Tomine is a Patagonia fly fishing ambassador and the author of Closer to the Ground. He lives on the coast of Washington with his wife and two kids.