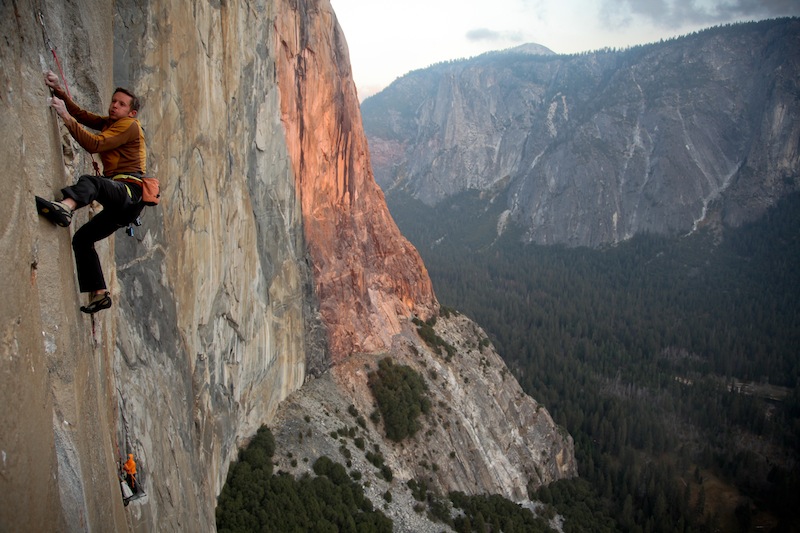 When I see a photo of someone climbing a severely overhanging 5.14 limestone sport route, I marvel at the physical prowess. Amazing. And though I can’t imagine being that good myself, I can see how some people can do it; I can sort of imagine it. At least I can see the holds. But 5.14+ climbing on a vertical granite face? Huh? Tommy’s Dawn Wall project doesn’t look like it has a single god-damned hold on the thing. The other day a handful of friends were saying how we’ve been on 11+ or 5.12 granite slabs and sworn that we were standing on absolutely nothing, holding absolutely nothing, and stuck, unable to move (“There’s nothing here! Nothing!”). How the hell can anything be more technical? It blows my mind.

Anyway, Tommy has launched, and it’s going well. As you may know – he’s been quite open and public about it (not that he has much choice, given that you can see the route from the road in Yosemite Valley), even posting some updates from the wall on his Facebook page. Bahhumbug, blasphemy!? I’m not so sure, and I’ve got some thoughts on it, and some of Tommy’s, that I’ll post here soon. 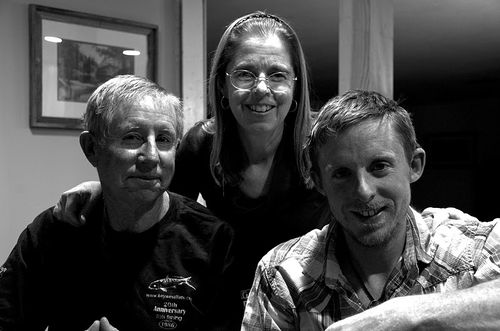 Mike, Terry, and Tommy Caldwell. Photo: Rebecca Caldwell
He started Saturday morning, trying to free climb surely the hardest bigwall free route on the planet – though it’s not really a route yet, since nobody’s done it. It’s been a multi-year project, one he began alone, before joining forces with Kevin Jorgeson. But Kevin recently smashed his ankle on the eight-foot sideways dyno of pitch 15, and is out the rest of the season. He graciously, fully encouraged Tommy to keep trying, but Tommy needed a partner – someone to belay him and jumar behind, basically playing a support role for him to try to free every pitch on lead, in a ground-up push. If he falls, he’ll lower to the belay, pull the rope, and try again, not returning to the ground and not climbing the next pitch until he’s freed the previous.

Tommy’s terrific wife, Becca, volunteered, as did his longest-running climbing partner: his dad, Mike. A great climber and former bodybuilder (damn, couldn’t dig up any photos to post, but there’s one of Mike striking a pose in an article Tommy wrote in issue #9 of Alpinist for those inclined), he taught Tommy to climb at an age when most of us were sucking our thumbs and goofing around in the sandbox. 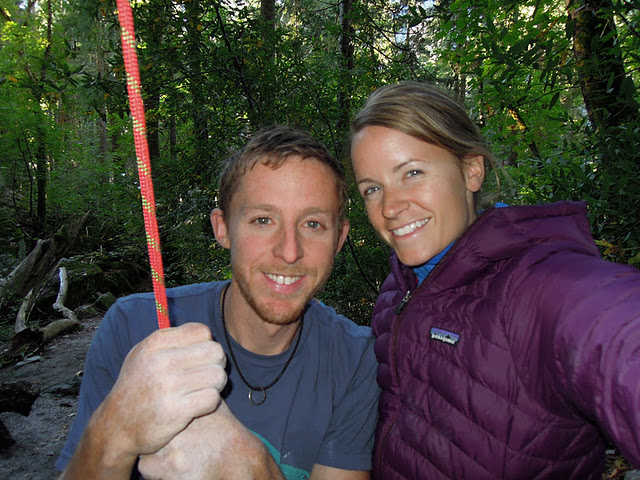 “I’m coming out to help!” Mike insisted to Tommy over the phone – he’s 60, with the enthusiasm of an amped teenager (hmmm, something about the apple not falling far from the tree…). He and Terry (his wife, Tommy’s mom) had just returned from Japan, but no matter. “I gotta get in shape!” Mike said, and worked-out so hard for two days that he puked (hmmm, apple, tree?). Then they hopped in their rig and drove to Yosemite.

Trying again here to wrap my brain around the difficulty of the climbing – Tommy told me he needs new shoes each time he tries the crux “Thumbercling” pitch – holding himself to the wall with his thumbs overhead on miniscule nubbins while his right food stands on an even smaller edge. Needs new shoe rubber, not yet worn-down or else his foot pops, and it needs to be cold so that the rubber doesn’t roll. (I was like, uh, yeah dude, know whatcha mean, I’ve, uh, been on lots of pitches like that – man, I sure hope he sends so I can stop thinking about that route myself and move on to other climbs…)

Further perspective on difficulty and endurance: if he can get through the first 18-or-so pitches, some of which are hard enough that he can climb only one a day (and only in the couple of shaded hours of late afternoon, which sometimes turn into night-climbing by headlamp), then it’s pretty much in the bag: the final 12 pitches are easy enough that he’ll probably cruise them in a single day. How easy? Easiest pitches of the final dozen are 11+/12-, with one of 5.13. That’s the cool down.

OK, enough fanboy hype for now. I think it’s rad that he’s got such support, and I applaud the man for trying so hard and for having the balls to be so public about a climb that’s far from assured. Maybe I’ll try to get there to have a marg ready for him and Becca, whether he sends or not. I would make one for Mike, too, but I don’t know if he’d accept – I mean, I’d hate to wreck his training program…