For the past nine weeks I’ve been taking a course in fiction writing. As part of the class, we write short stories and critique each other’s finished works.  The other night we critiqued a classmate’s story about a woman who worked for a corporation that took extreme measures – from forcing employees to sign far-reaching confidentiality agreements to installing cameras on campus – to protect its secrets.

As with other stories, we eventually got around to discussing the believability of this one. I thought the level of secrecy at the company was a bit overdone (and not intended to be), but my classmates reached an unusual consensus on this point: it was a very realistic portrayal. They agreed that regardless of the size of the corporation or the type of industry, executives spared no expense to keep information from the public, and even from employees.

That project – The Footprint Chronicles – puts this notion about corporations and transparency to the test more than any other I’ve worked on. It originated from the belief, citing Socrates’ philosophy on leading an examined life, that we need to continuously learn about ourselves in order to lessen our own footoprint. It also grew from the belief that by sharing what we learned with the public, we would earn customer confidence and inspire other businesses to be more transparent, too. 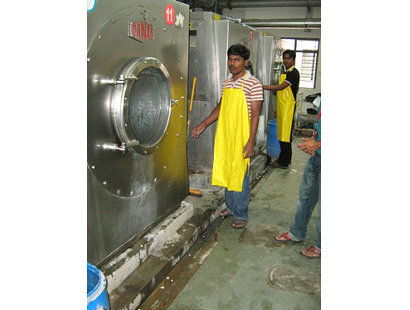 [Above, left – One of the many steps involved in constructing our Chacabuco Pack. This photo comes from a series of pictures taken by Kevin Cotleur, our new product developer for packs and luggage, during his first visit to the factory that produces these packs. The company, Kanaan Saigon Company, operates their factory in Duc Hoa, Vietnam. Photo: Kevin Cotleur. Above, right and right – An example that illustrates the value of first-hand factory visits. Photos and captions come from the slideshow series "Sewing: Bangalore, India" in the Footprint for our Organic Cotton Jeans. [upper photo] "Before placing our first order we had reviewed a third-party audit that gave Arvind a substantially clean bill of health. But third-party auditors often rely on local staff, who may see that workers wear required face masks. . . . [lower photo] but not notice they are wearing flip flops (common work wear in many Asian countries) around chemicals. Local auditors can be invaluable – they know the language and culture and thus often see things that a foreigner might miss – but might miss other things. This brought home for us the critical importance of having our own staff visit a factory. Photos: Cara Chacon]