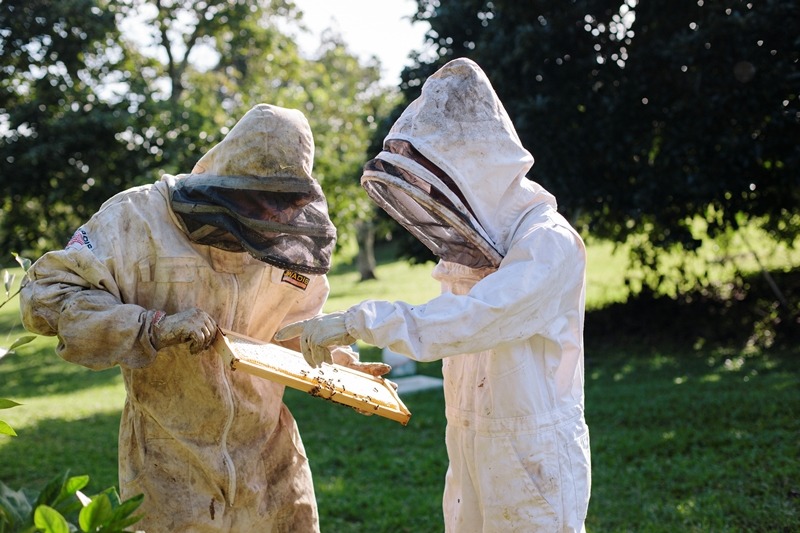 His hands were unlike other farmers. Not calloused, hard, cracked and stiff, but broad, flexible and quick. He seemed not to mind the thick white suit we were both wearing or the suffocating screen helmet. I felt like I was going to melt away.

The deeply forested Waiho‘i Valley on Maui has countless wild bee hives that are vital to the flowering ecosystem. Avocado, mango, guava, ohia, rainbow eucalyptus and wild ginger thrive in fertile soil that’s fragmented by dark lava veins. The Kapia stream ribbons down through it all towards the ocean. At the base of the valley, nestled in a dead mango stump, a hive plagued a local fisherman and his family.

The gnarled location of the hive forced my friend Kenny to be more attuned and work more smoothly than usual—he had been doing this for twenty years. When the bees attacked he remained calm and focused. With surgeon-like precision he worked the hive, angling the box and gently adjusting the combs to fit snugly. His movements were clever and patient yet eager. The white suit clung to my sweaty skin, making it easier for the bees to sting me, but I watched intently. I was hooked.

Above: My girlfriend Malia and I inspect a frame from one of our hives to see if it’s ready to harvest. Hana, Hawai‘i. Photo: Anna Riedel

I learned so much from Kenny that day, including the lesson that things don’t always go as planned. For whatever reason, the queen elected to abandon her proposed new home to recolonize elsewhere in the Hana wilderness. Gallons of liquid gold, however, were a decent enough consolation for my first attempt at beekeeping.

I decided to give it another go when my mom found a wild hive in an old Styrofoam cooler at the edge of our property. Acting with the wisdom I had picked up from Kenny, my buddy Dege and I did a great job. The cooler broke apart nicely and the comb fit easily into the box, along with the relatively docile bees.

Many great successes and heartbreaking failures later I am up to seven colonies. I have performed extractions from houses and yards where unwanted bees would otherwise be exterminated. After being relocated to my property or my friends’ farm, the bees share a great abundance of organic citrus, mango, avocado, exotic fruit trees and wild flowers. 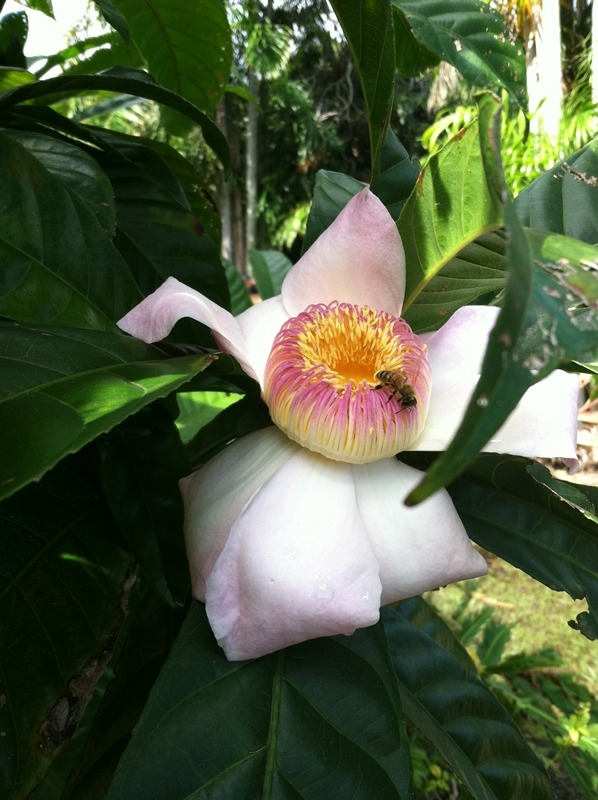 My enthusiasm for beekeeping grows every day. It’s a great feeling when you become knowledgeable about something and begin to notice all of the beautiful intricacies. Photo: Anna Riedel 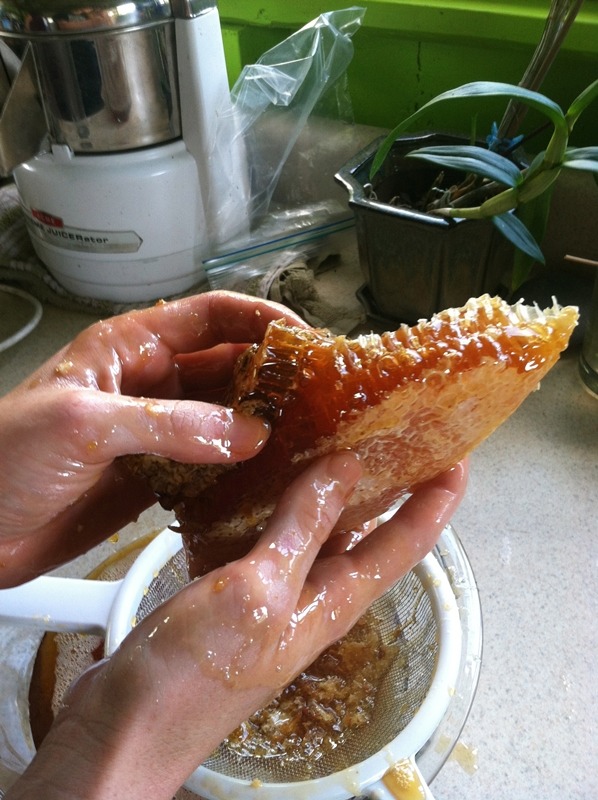 This is how we used to process the honey. Over time we have developed better techniques, but I still consider us beginners in a lot of ways. Photo: Anna Riedel

Inside each hive, tens, sometimes hundreds of thousands of little workers are “busy as a bee.” The small females soar through the clouds and the flowers collecting pollen, nectar and propolis over a three-mile radius. As the girls return from their foraging missions it’s easy to spot the bright yellow, orange and red powder on their legs. Pollen is their protein source. It can also be collected and enjoyed by us. Propolis comes from tree sap and acts as the glue in strong, well-insulated hives. Nectar is collected and then regurgitated from one bee to the next until enzymes in the bees’ stomachs break it down enough for long-term storage. So, yes, honey is actually bee vomit!

Drone bees have only one purpose in life: to mate with the queen. At about 23 days of age, the queen takes her nuptial flight. In order to protect against inbreeding, only drones from nearby hives pursue her. At around 100 feet up, only the strongest drones are able to catch her. After mating with about a dozen of the finest specimens, she returns to her hive with enough sperm to lay as many as 2,000 eggs per day for the rest of her life. The drones who mated with her will die shortly after.

As a colony grows the queen may elect to “swarm” with a little over half of the population. After two or three days of hanging on a tree branch scouting the area, they will select a place to build their new home. The worker bees in the old hive create a new queen by extending the cell in which an egg is laid and feeding her a special food called royal jelly. 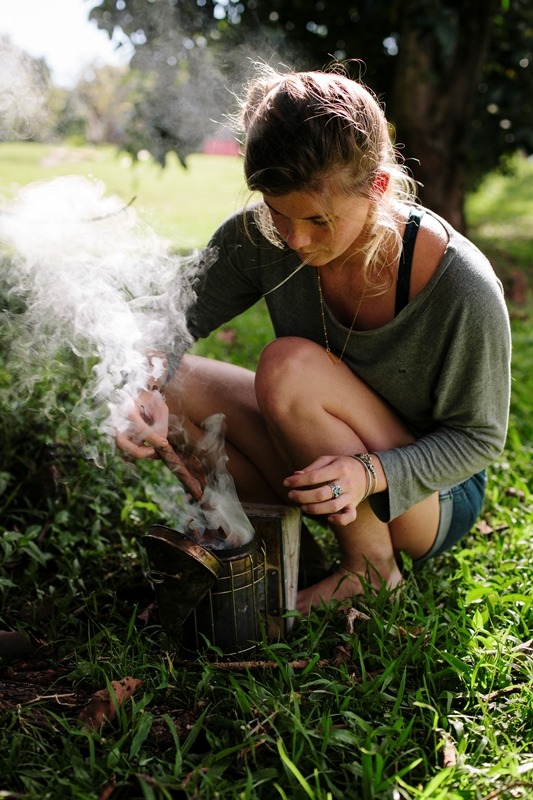 Malia lights the smoker. When smoke is puffed all around the hive the bees are tricked into thinking their home is being destroyed. Instead of attacking us, they stuff themselves with honey in preparation to evacuate and relocate the colony. Overeating honey makes the bees lethargic and much less aggressive. Photo: Anna Riedel 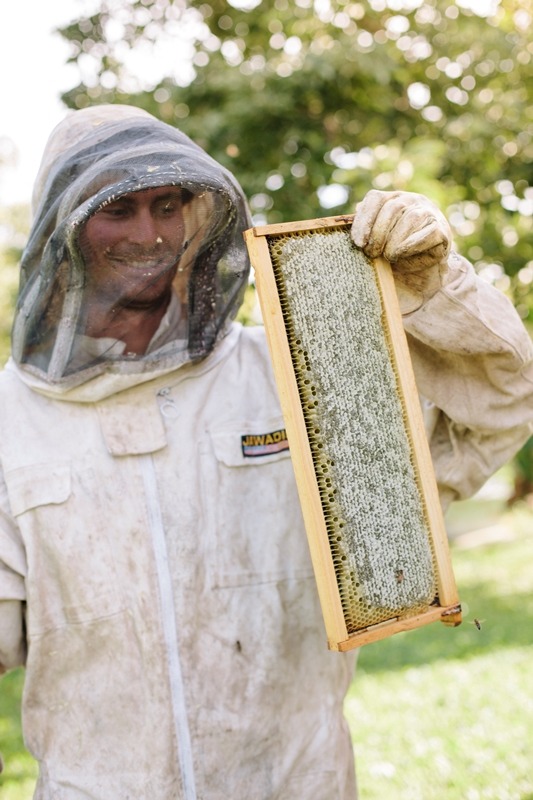 This is me collecting honey. One day I hope to be as good as some of the old timers who open their hives with no suit and blow cigar smoke on the bees to keep them mellow. Until then, the suit is essential. Photo: Anna Riedel

In the past year or so, my girlfriend Malia and I have created a small informal business we call Milk and Honey Farms. It is our dream to one day have a real farm with all kinds of animals and to live as self-sufficiently as we can. For now though, we’re busy being young!

Malia is working full-time in Seattle at a physical therapy clinic and plans to go to PT school next fall. Life as a professional surfer keeps me away from Hana so much that it’s hard to commit to anything steady at home. Although, another thing I find fascinating about bees is they are completely self-reliant and require very little maintenance. I can pick up and leave any time the surf is pumping.

While away, I dream about coming home and picking up where I left off. Expanding the bee family whenever possible brings us one step closer to the real Milk and Honey Farms. 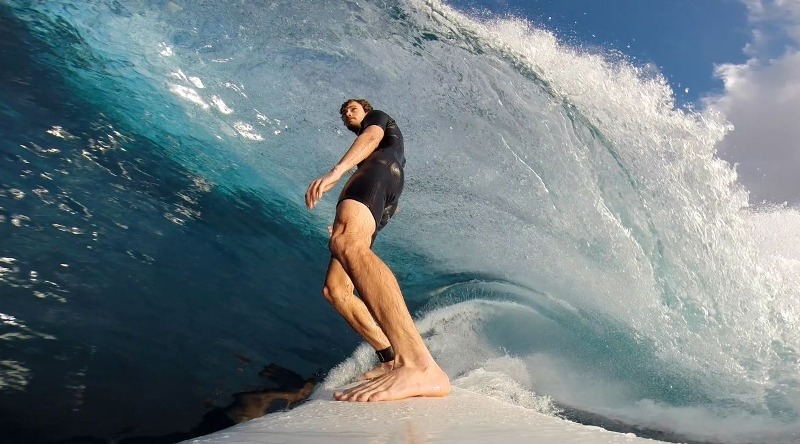 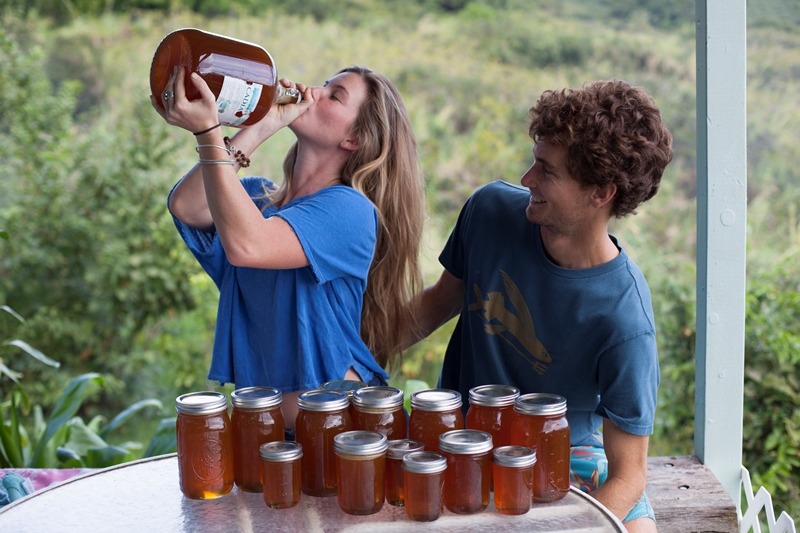 She’s not really drinking the honey but it is so good that you want to. Honey is an amazing alternative sweetener and provides a wide range of nutritional benefits as well as medicinal properties. Photo: Anna Riedel 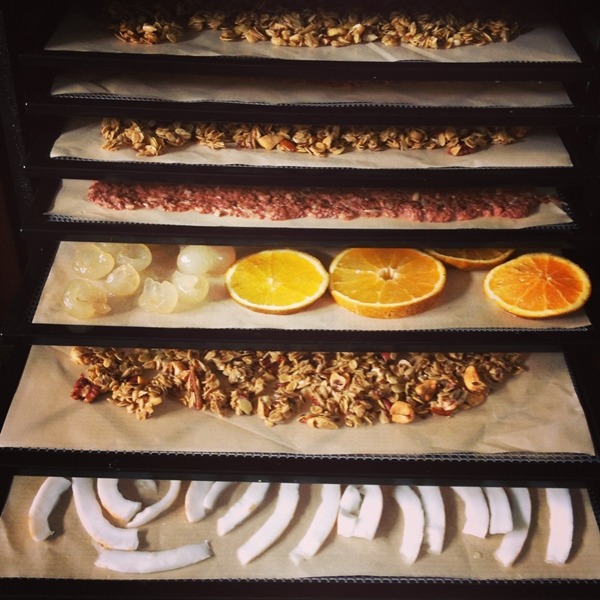 When we are overloaded with fresh fruits, Malia and I process them in a dehydrator. She makes a mean granola and I am constantly drying bananas, coconut and papaya. They make great gifts. Photo: Anna Riedel 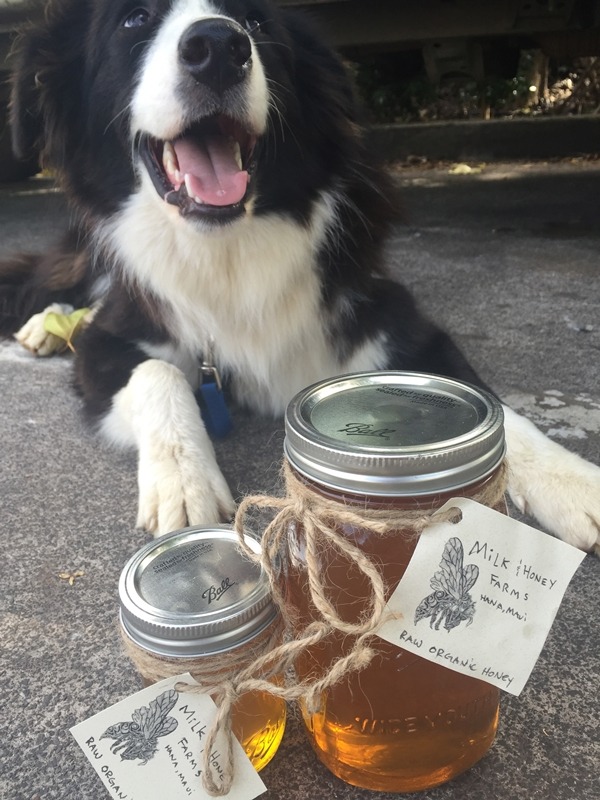 Our pup Moku with a few jars of honey. Photo: Hank Gaskell Collection

For anyone interested in beekeeping, Hank recommends getting in touch with a local bee farmer. “They are generally really friendly people and are excited to show others what they do, including how to get your own hive set up.”

Hank grew up in the idyllic surroundings of small-town Maui. With the area’s many hidden waves as a training ground, he was soon traveling the world as a professional surfer. Though the last ten years have seen him on the road more often than not, it’s being at home that he loves the most. “I love cultivating the land to grow food, and freediving is my second passion behind surfing. Just living simply with my friends, family and dogs brings me the most happiness.”