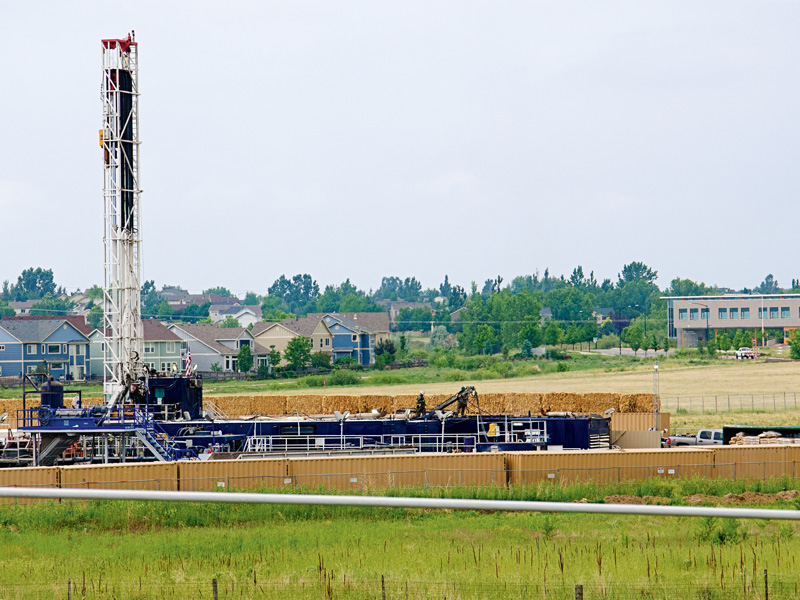 Through our current campaign, Our Common Waters, and with exposure to increased oil and gas development near our homes and communities, we have grown concerned about hydraulic fracturing (commonly called “fracking”) and its impact on water, air, soil, wildlife habitat, and human health. Over 90% of oil and gas wells in the U.S. use fracking to aid in extraction, and many fracking fluids and chemicals are known toxins for humans and wildlife.

For decades, natural gas (methane) deposits were tapped by single wells drilled vertically over large, free-flowing pockets of gas. Then came fracking, a water- and chemical-intensive method that promised the profitable extraction of natural gas trapped in shale.

Because of fracking’s wide-ranging risks and impacts, we support each
community’s right to educate itself and regulate and/or ban fracking,
and we support local, state and federal government efforts to monitor
and regulate fracking.

As we’ve learned more about this issue, we’ve been inspired by individuals and communities across the country, speaking out and taking action to prevent harmful impacts. It is truly a grassroots movement – here are some stories and resources:

We at Patagonia recognize that, as a business and as individual employees, we use natural gas that is almost certainly obtained through hydraulic fracking. Natural gas is used to generate 37% of the electricity in California where Patagonia has its headquarters. In addition, in regard to fossil fuels in general, many of our products are made from polyester and nylon, both of which are made from petroleum. However, much of Patagonia’s polyester clothing is made from recycled polyester (some from yarn manufacturing waste and others from recycled water or soda bottles). A few of our nylon products are made from recycled nylon. Patagonia also relies on gas and oil to ship its products: please see our blog posting on manufacturing, that includes mention of shipping and carbon footprints.

In the end, our current reliance on fossil fuel including natural gas, particularly for electricity and transportation, makes it all the more important to advocate for and support a shift to renewable energy sources (e.g. solar, wind and geothermal) and conservation.

As we learn more about the impact that fracking has on freshwater, we also recognize that there is controversy over the role of natural gas in our energy future. Many tout it as a green alternative or “bridge fuel” – a necessary alternative to coal as we transition to renewable sources. While we recognize that fracked natural gas is a large part of our nation’s energy mix, we question the bridge-fuel concept. If we subscribe to a positive view of fracked natural gas, and support investment in that path, will focus on this cheap and plentiful fuel thwart development of truly renewable sources? Will government and industry have the will to shift away from natural gas in time to avert ongoing catastrophic climate change? In the end, natural gas is a fossil fuel, the burning of which leads to more carbon in the atmosphere. We can’t drill our way to a clean energy future. And, we remain largely in the dark regarding the potential impact of unburned methane emissions and leaks from natural gas infrastructure. Due to this uncertainty, we feel it is essential that we move, as quickly as possible, to a low-carbon, renewable, and where possible, zero-carbon approach.

We’re encouraged by some of the research and conversations around alternatives: A recent paper by Stanford professor Mark Jacobson and his colleagues makes a convincing argument that New York state could be powered by wind, solar and water by 2050 with no loss of energy jobs.

As our CEO Casey Sheahan noted in his October 2012 Denver Post op-ed on the issue, “For those who doubt the increasing volumes of science showing that fracking is bad for the environment and bad for our health, I say to you, let’s give the benefit of the doubt to our children. Let’s make them proud we moved to clean energy before it was too late.” We’ll continue to track the issue, and support the grassroots movement that is pushing local, state and federal government to regulate and/or place bans on fracking in communities across the country.

To learn more about the Our Common Waters campaign, please visit www.patagonia.com/ourcommonwaters.