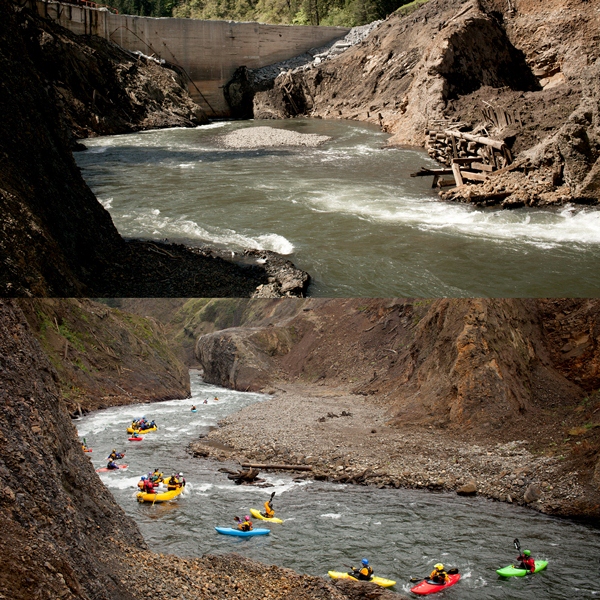 A little over a year ago, a 125-foot-tall dam stood in Washington’s White Salmon River, a concrete plug with a serene reservoir at its back and a trickle of river spilling out downstream.

But it’s hard to tell that today.

The Condit Hydroelectric Dam, which was built in the early 1900s to harness the energy of the White Salmon for local industry, was blasted into the history books in October 2011 with 700 pounds of carefully placed dynamite.

The explosion, part of a phased project orchestrated by dam operator Pacificorp as an alternative to building costly fish passages, released the White Salmon River in a torrent of muddy water, debris and sediment, draining Northwestern Lake in less than two hours and freeing the river for the first time in almost a century.

Since that time, demolition crews have completed the removal of some 35,000 cubic yards of concrete, as well as logjams and other debris in the river.

And when public-access restrictions were lifted in early November, a group of boaters, river activists, biologists, rafting guides and kayakers converged for a historic float.

About 30 people — including individuals who had followed the dam-removal project since day one — piled into two rafts and 13 kayaks to float a section of river that had been reborn. The boaters paddled about five miles of class II and III rapids that wound through what used to be the reservoir and dam site.

“It was beyond fun,” said Tom O’Keefe of American Whitewater, a longtime proponent of the dam removal who helped organize the float. “This is a day that I’ve been waiting for for over a decade.”

Though it came together as kind of a spontaneous outing, what commenced was a jubilant and sincere celebration of a river’s revival.

“We realized it was going to be the first official float down the river and it quickly turned into this great celebration,” said Amy Kober of American Rivers. “It was an incredibly meaningful experience to be there together, to float through the old dam site.”

The river was running clear — a huge contrast to the sediment-laden waters of a year ago — and on this characteristically drizzly fall day, it carried the boaters through deep canyons and past basalt outcroppings. Salmon passed the boats on their way up river; herons and ducks were spotted near the banks.

And compared to a year ago, when the water was chocolate-milk muddy and the landscape raw-looking from the release, signs of revitalization were everywhere.

“It was gorgeous,” Kober said. “You think back a year ago to when the blast happened, when all that sediment was let loose. Just a year later, the salmon are spawning in the lower river. It’s incredible how resilient the river and the salmon are. It’s a new river, and it’s still evolving so much.”

The Condit Hydroelectric Project was located a little more than three miles upstream from the confluence of the White Salmon and Columbia rivers. The section of the river above the reservoir, which is home to fantastic sections of whitewater, has long been popular with boaters. But it had an anticlimactic ending, Kober said.

“You would have this amazing run and then the takeout was at the reservoir. You would kind of emerge into this big flat water,” she said. “Now you can paddle it for miles and miles toward the Columbia.”

But freeing up a recreational use was only one reason advocates pushed for the dam to come down. They were also driven by a desire to see fish habitats and river ecology restored.

“It’s not just the recreational experience, it’s that whole experience of connecting with that river and everything that makes a healthy ecosystem,” O’Keefe said.

The group paddled through the former reservoir site, looking high above them to see the bathtub ring that once was a lake’s edge. They passed pillow basalts and waterfalls spilling into the river, before they came to where the dam once stood.

“You can hardly tell where the dam was, they did such a good job of cleaning it up,” O’Keefe said.

Passing the dam site, they pulled off onto a gravel bank to celebrate. 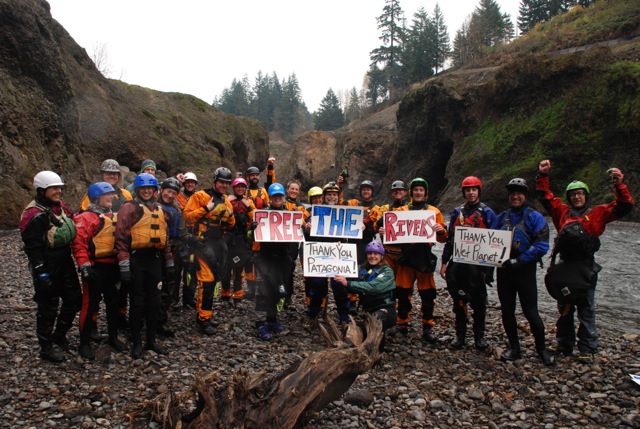 “We all sort of took in the moment, passed a bottle of champagne around. There were lots of hugs and cheering,” O’Keefe said. “I was thinking, all those years working on this project, that it’s not the Endangered Species Act, Federal Power Act … the economics, it wasn’t any of those things that ultimately made this happen. It was the people who cared about this river. It was that passion and excitement that made this happen. Seeing that was pretty fulfilling.”

Ben Knight, a filmmaker with Felt Soul Media who was there to document the event for Patagonia’s documentary project, DamNation, said people these days have become almost desensitized to seeing wild places developed or manipulated.

“But it’s incredibly rare to see things go back to the way they were before,” he said. “So seeing something returned back to its natural state is an awfully powerful thing to witness.”

After the champagne toast, the group continued downstream, where they were able to run the new version of Steelhead Falls. The dam had previously diverted water around it, but now the class IV rapid was bouncy, dynamic and powerful – just what you would expect from a free-flowing river.

Before you run the Lower Gorge yourself, check out this post from American Whitewater.