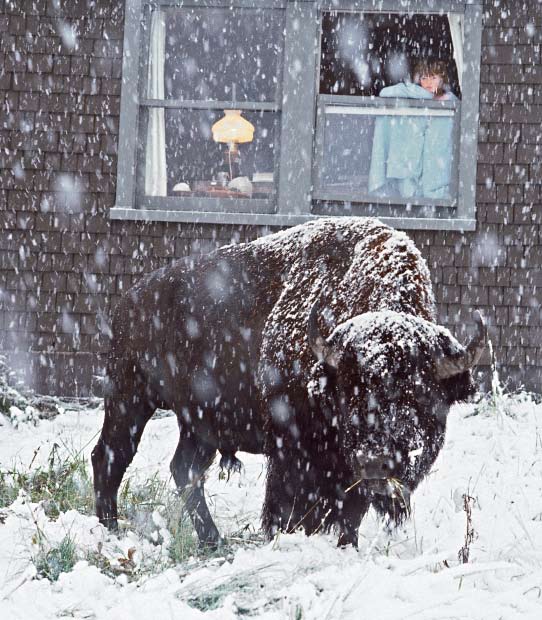 On the inside back cover of our 2010 Holiday Catalog is an image that originally appeared on the cover of our 1990 winter Kid’s Catalog. Not one person here in mail order even worked for Patagonia back then but nonetheless it’s a picture many of us know well. The photograph is of a little girl looking out her window at a buffalo munching grass on a snowy day in Yellowstone National Park. The reason we all know it so well is that Skye, the little girl in the picture, has worked here since 2004. When the picture reappeared in the current Holiday Catalog, I knew there must be a story behind that Yellowstone childhood and how she came to work here at Patagonia.

The story begins in England where her mom (a Brit) and dad (an American) met while in college. They married and returned to the US, living in Boston where her dad found work as an operating technician at Massachusetts General Hospital. But the story really gets under way in 1973 with a newspaper ad, an ad for the Winter Keeper position in the Canyon Village area of Yellowstone National Park (think The Shining). Only this job didn’t entail watching over a huge hotel, it involved watching over some 200 summer cabins perched on the rim of the Grand Canyon of the Yellowstone River. He was offered the job (Skye is pretty sure he was the only applicant) and after talking it over with his wife, she decided that doing it for a year might be fun; because, she figured, you can survive just about anything for a year. So they packed up their old Saab and their new baby (Skye’s sister Emma) and headed west.

They were given residence in the Winter Keeper's cabin, a homey but drafty house built in 1910 at 8600’ overlooking mighty 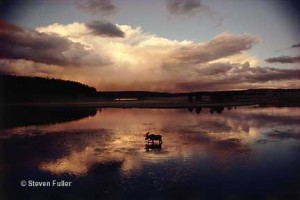 still lives in the same house above the Yellowstone River. He is a highly acclaimed photographer and in 1980 was awarded “International Wildlife Photographer of the Year” for his photo "Garish Moose." In 1992 he was a guest lecturer in the Royal Geographic Society’s lecture series; the list of that season’s speakers included such luminaries as Paul Theroux, Richard Leakey, Thor Heyerdahl, David Bellamy and Jonathan Porritt. To see some of Steven's work, visit his website.

Steven continues on in his work, this year marking his 37th as a Yellowstone Winter Keeper. Despite the years of continued service and isolation, he has yet to write the words "All work and no play makes Jack a dull boy."

[Photo above left, Not a bad backyard, Yellowstone in winter. Photo: Steven Fuller.]