Jonah. That’s the title. Simple, direct. About as austere as the landscape it refers to. Jonah is a book, and an unlikely one at that.It’s part cowboy, part environmentalist, part roughneck, and part naturalist.It’s part photo-journalism and part poetry. It’s naked fact and nuanced understanding. And it’s the self-published product of a young woman who, at just 25 years old, has managed to herself live a bit of each of these lives.

Nikki Mann is the editor/photographer/publisher of Jonah.She is, among many other things, a biologist hired by an oil and gas development company to conduct wildlife surveys of potential drill areas to assist in permit compliance. Officially, her job consisted of assessing the biodiversity of these areas and submitting reports on the various species populations living therein. The purpose of these official reports was to help determine the impacts of oil and gas development. Government reporting is long on facts and lean on story. Mann has long since turned in her fact-laden reports.Jonah is her attempt, along with cowboy poet Andy Nelson, to tell this landscape’s stories.

All photos by Nikki Mann, unless noted on photo. Many of Mann’s photos are coupled with captions and complimented (or contrasted) with selections of Andy Nelson’s cowboy poetry. Click on photos below to expand selections and read the text.

The landscape is, after all, the beating heart of Jonah.The book is named after the intensely mined Jonah Field, one of the most concentrated natural gas deposits in the U.S. Jonah Field is located in Wyoming’s Sublette County. The Sublette Community Partnership’s Socioeconomic Assessment has this to say about Jonah Field:

Jonah Field, located in southern Sublette County, WY about 35 miles south of Pinedale and about 70 miles north of Rock Springs, after being “rediscovered” in the early 1990’s was heralded as one of the most significant on-shore natural gas discoveries in the second half of the 20th century [sic]. Jonah represented a turning point in natural gas production as the gas contained in Jonah is trapped deep underground in extremely “tight”sand formations. New technologies and higher gas prices allowed companies to lucratively produce gas from an “unconventional” source. Due to the depth of the wells and complexity of the perforation techniques used to fracture the underground sand formations, drilling and production in Jonah requires substantially larger workforce requirements over a longer period of time then compared to conventional on-shore fields. The success of effective and lucrative gas extraction from the tight sand field led the way to future expansion of the nearby PinedaleAnticline field a few years later.

Jonah Field is the type of place energy development enthusiasts think of when they chant “Drill, Baby! Drill!” By all economic accounts, Jonah has been wildly successful. With 10.5 trillion cubic feet of natural gas, it is one of the largest on-shore discoveries in the 1990s. The Bureau of Land Management’s recent approval of 3100new wells for this area is testament to the enthusiasm with which Jonah’s projects have been embraced. That it is accessible from a surprisingly small 36square miles (approx. 23,000 acres) makes Jonah Field by far one of the most concentrated domestic natural gas sources in development.

Mann’s biological survey work revealed discoveries of a similar concentration and significance. Contrary to the suggestions of the dull, featureless umber hills that characterize the landscape of Jonah Field, the terrain harbors a stunning depth of biological diversity and cultural history within its impact zone. A description of the area offered by the Upper Green River Valley Coalition echoes Mann’s findings:

Nestled between the high peaks of western Wyoming’s WindRiver, Gros Ventre and Wyoming Ranges, our valley is home to more than 100,000big game animals, continental America’s longest big-game migration route and a crucial link to the Greater Yellowstone Ecosystem (GYE), the largest publicly-owned big game winter range in the GYE, the largest mule deer herd inU.S., one of the west’s last best sage grouse habitats, a world-class fishery, and one of the largest natural gas reserves in the U.S.

When it comes to environmental and energy issues, we no longer live in a time of easy conversations. It is rare when authors and editors dealing with contentious, complicated issues successfully resist the pull to align their texts with a particular side and present information in a way that honors all parties. With Jonah, Mann resists this pull admirably. Her blend of photos, detailed captions, and Nelson’s deeply reflective poetry reveal how hard it can be to spend time with a ranching family and not begin to sense the depth of connection they’ve formed with a

landscape they’ve depended upon for generations. It’s similarly difficult to view Mann’s intimate portraits of drill-rig workers (roughnecks) and not respect their commitment to family; one that drives them to earn their pay through long, mid-winter shifts on days when high temperatures struggle to reach -20F. And it’s hard glean facts from the text and not sympathize with environmentalists who point out that Pinedale’s citizens—7000 of them living at the heart of our country’s largest intact ecosystem—are breathing some of the dirtiest air in the country.

Mann’s commitment was to tell a story that needed to be told. It was through hard work and belief that the book came to be born. And not a day too soon. The conversation it contributes to is one where a voice likeJonah‘s is needed. She has done an honorable job in telling the tale. The least we can do is tell a bit of hers.

Ms. Mann is a professional biologist, full-time ranch hand, a working journalist, a creative writer, a horse-packer, self-trained photographer, and one of few women to complete grueling ferrier training (blacksmithing horseshoes from raw stock). In 2006, she setoff with her partner, Jeff Wohl, on a expedition of the type rarely undertaken in modern America. Their aim was to get to know the high, wild lands at the heart of America in a way our modern culture first discovered it: on foot and on the back of a horse. So they built all of their expedition gear. From scratch. They stitched the leather of their packsaddles, nailed the wood of their packframes, and smithed the iron of their horseshoes. And in the still-snowy April air, set off to cross the great open spaces of country stretching from northwestern Nevada clear to Upper Green River plains, a distance of about1,000 miles. 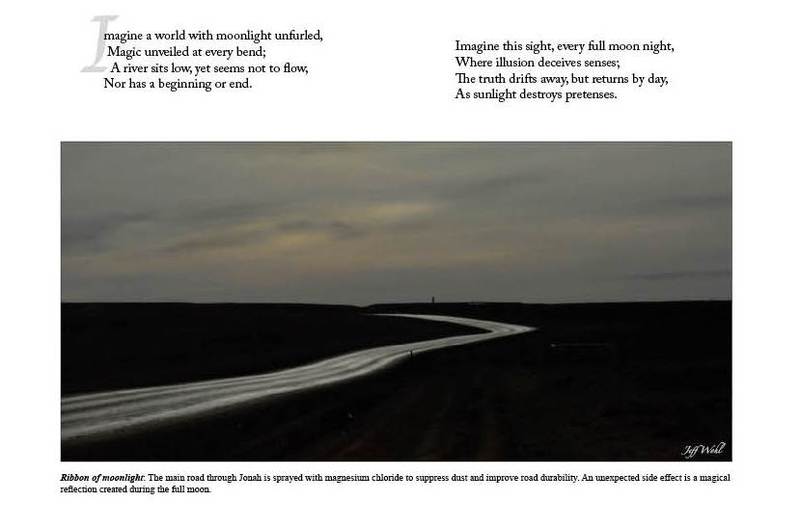 Perhaps this is why Mann persisted after Jonah was embraced then abandoned by a list of partners and publishers. She is, after all, familiar with hardship and endurance, and understands the strength to deal with such elements comes only from a deeply rooted love of the land. Her connection to the Upper Green River Valley runs deep, and her dedication to honoring the voices participating in conversations about the Upper Green River Valley is palpable in Jonah‘s pages.