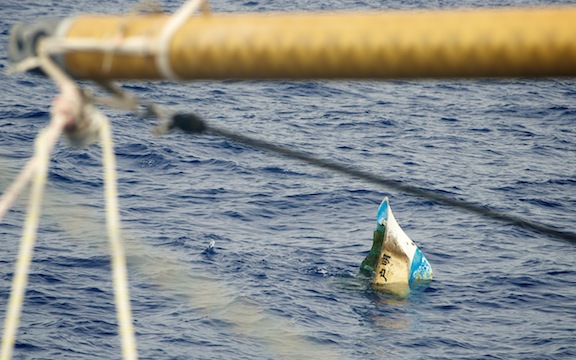 “It’s a whale,” yells Tracey from above deck. I’m eating humus below in the salon with Dani, after forgoing Kelvin’s lunch of fried Kim Chi with rice and seaweed. Wildlife sightings are like breaking news aboard Sea Dragon, sometimes the only demarcation from one day to the next. Dani and I both grabbed our cameras and went on deck. Tracey was peering far off in the distance, tracking some object with binoculars. The day before we had had a Sperm Whale breach within a 100 meters of the ship to the bow and we hoped our luck would give us something similar. But there was no breaching and no blowhole spouting from the object in the distance. “Is its fin just sticking out of the water? What is that? It’s white… is it a white whale?” says someone on deck. I move to the bowsprit, start snapping photos. There is no color in this day—a gray sky meets a gray ocean at the horizon, it’s as if we’re traveling through a monotone void.

As we come up onto the object, we realize it’s not a whale. “It’s a boat!” I yell. Indeed it is—the front third of a small skiff, bobbing vertically, bow out of the water. The action is so gentle—the sea state is calm and the wind nearly nothing. On either side of her are Japanese characters, and it becomes instantly clear what we’ve found. Here, 1500 miles east of Japan, we’ve found a boat presumably ripped from its mooring when the wave hit. Everyday now, we’re spotting something—a spare tire from a light truck, a piece of traditional Japanese flooring, and several other objects that may or may not be from the tsunami. But this is the biggest find so far. The dimensions of the ship however are not large—my guess is that it was about 16 feet when intact, and it looks like a Japanese version of the common Central American runabout fishing boat: the Panga.

We dive on her to survey what we can’t see beneath. In the water, there is little growth on the boat—just a few barnacles, maybe five or so. Tucked in the inside are probably 50 or 60 fish; Triggers, Rainbow Runners and some species that look clearly out of place—tropical coral dwelling fish. As we approach they scatter, then return. What’s now a wreck of a boat has become a floating reef system for this crowd. The back 2/3rds of the skiff are gone,the edges are jagged which denotes some past violent action tearing the boat apart. “I wonder if the rest of this boat is sunk, with an engine still attached,” says Marcus. We go on to think about how many objects are anchored by some heavy thing, that when rotted, will bob to the surface. 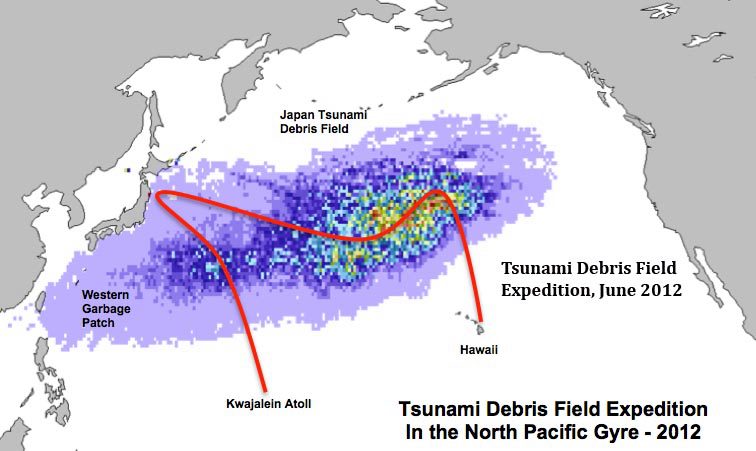 Stiv J. Wilson is a freelance environmental journalist/photojournalist and the Communications Director for The 5 Gyres Institute. He is also an ambassador for The Surfrider Foundation and an advisor to The United Nations Safe Planet campaign on hazardous chemicals in the environment. Stiv and a small crew are currently sailing the North Pacfic Gyre to study plastic pollution in the Western Garbage Patch and to survey the damage caused by the March 11, 2011 tsunami that raged across the eastern shores of Japan. You can follow his journey, and take the Plastic Promise, on the 5 Gyres Institute blog.

All photos courtesy of The 5 Gyres Institute

Our hearts too are always with our friends, family and co-workers in Japan. This video was shot recently on the campus of Patagonia in Ventura, California. We love you Japan!