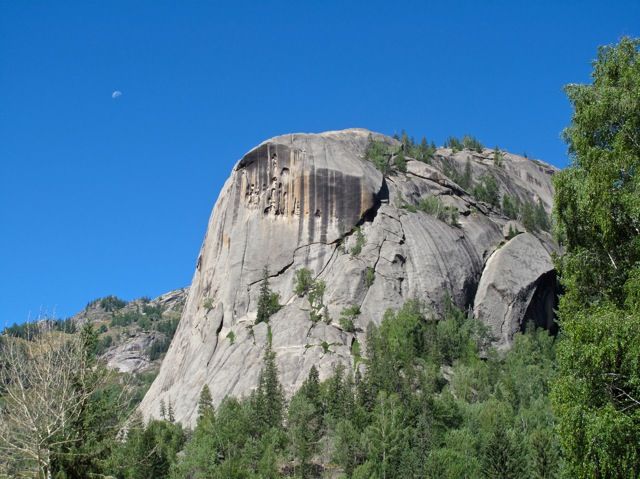 Details emerge in our second update on Granite China. Did the crew get to climb? Our inside informant (me) uncovered a few details. The reason for the previously spotty details is that, while there, our team had poor phone reception and couldn’t access the World Wide Web. Even if they had web access, China blocks Facebook and Twitter, making one wonder how 1.3 billion people survive. But our friends got to unplug and see a fascinating part of the world. Here's what we know:

["The Elephant". Two lines ended up going in on this formation. Photo: Jeremy Collins]

So while it's still unclear how the crew got to climb, I can't help but imagine the scene at the park headquarters:

Tommy tries to be diplomatic, and is just too damned nice. Talks with the park officials, then turns and walks back. “Aw geez, guys, not sure if this will work out.”

Becca and Marina then walk up, flash their lovely smiles – Chinese officials surely love beautiful women, too. The officials stand, stern-faced, and shake their heads.

Hayden looks around, twitching with the urge to climb, mumbles something about “sending,” and walks up to the park officials and says, “Yo, let us climb, Wu Tang!” No dice.

All the while Jer, though frustrated, stays very namaste and keeps drawing. What he draws, though, as he looks at the officials and chuckles to himself, remains a mystery.

Just about that time, someone says, “Where’s Mark?” He seems to have disappeared. Mark’s an awesome guy, has traveled the world, been arrested damn near everywhere in the world, and is the kind of guy who gets things done. The trouble has never been for anything harmful; Mark just dislikes silly rules – like the adult version of the kid at recess getting in trouble for climbing the tree. Nothing’s wrong with climbing a tree, why can’t I climb a tree?

Suddenly, from behind the bushes, the crew hears “Psssst! PSSSST!” and there’s Mark, waving them over. He’s wearing a huge smile. “Guys – guys! – so I found this way around back where we can jump the fence and sneak-in – forget about these clowns, let’s climb!”

Imagined scenarios aside, one way or another they got to climb, and likely put up the first complete routes ever climbed in the park, with local pastoral people and tourists from Bejing alike cheering them on. Stay tuned for Tommy’s trip report coming soon. [Update: Read part three.]