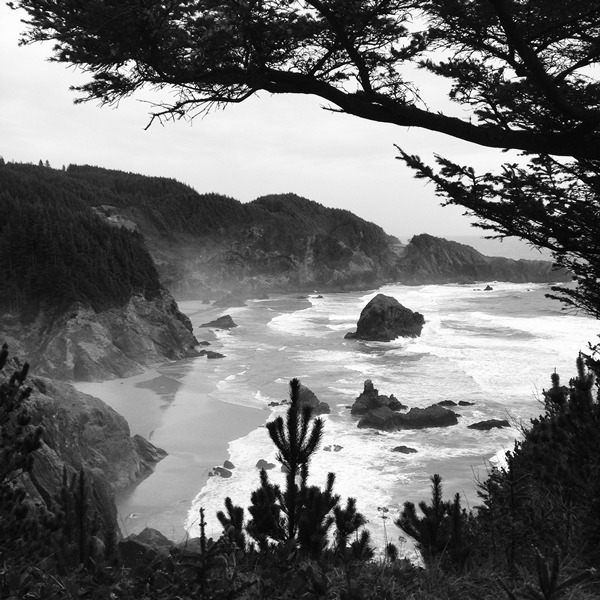 “EXPECT ANOTHER ROUND OF STORM-FORCE WINDS, WITH HURRICANE-FORCE GUSTS POSSIBLE, ESPECIALLY IN THE VICINITY OF CAPE BLANCO. THIS WILL BE A VERY STRONG STORM. MARITIME AND COASTAL INTERESTS SHOULD TAKE ALL PRECAUTIONS NECESSARY TO PRESERVE LIFE AND PROPERTY.”

By dawn, the damage was done—downed trees, flooding, thousands without power. The swell was huge and ripped apart by 70 mph gusts.

None of those for a while.

Late that afternoon I sat on the couch and read “The Super Trees,” a feature in the October 2009 issue of National Geographic. It detailed Mike Fay’s and Lindsey Holm’s Redwood Transect, a yearlong, 1,800-mile, south-to-north hike through California’s coast redwood forests. Flanking their route, they’d found the world’s southernmost grove at Villa Creek in Big Sur; near the article’s end, one line struck me: “On the last day of their transect, as they hunted for the northernmost redwood near Oregon’s Chetco River….”

Wait—I lived on the banks of the Chetco. And coast redwood is Oregon’s rarest type of forest.

I found my big Forest Service map and noticed an obscure place a few miles northeast of my cabin: next to the Snaketooth Pistol and Rifle Range was the Snaketooth Redwood Botanical Area. The world’s most northerly naturally occurring redwoods lived there, above the Chetco at Redwood Creek, which for me became the next day’s destination, to be reached on my fatbike via a cold, muddy mountain road. 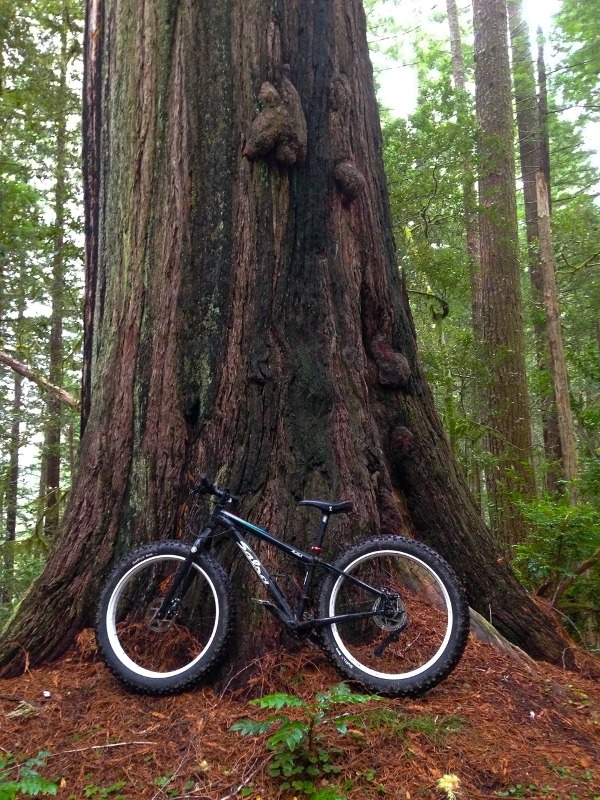 The world’s tallest trees once flourished in some two million acres from Oregon to central California. When gold surfaced in 1849, hundreds of thousands of people flocked west—quadrupling California’s population in a decade, birthing hundreds of sawmills—and the ancient giants were felled widely to quench the need for quality, quick timber, nobody really caring that the groves were older than Jesus.

And so 2015 isn’t 1850 (when the commercial logging and clearing began)—95 percent of those thick old-growth trees, which can grow nearly 400 feet high and live for more than 2,000 years, are gone.

“The battle to save the redwoods has already been fought, and look, we’re left with table scraps,” Steve Sillett, a forest scientist at Humboldt State University, said in the National Geographic article. “The challenge now is understanding how to improve management on the 95 percent of the redwood landscape that’s just starting to grow.”

With myriad homes and fences and decks and patio furniture built during the past 165 years, just five precious percent of those virgin old-growth trees remain, 77 percent of them, unprotected, living on private land. The other 23 percent mostly constitute parks and preserves.

“The redwoods, once seen, leave a mark that stays with you,” John Steinbeck wrote in 1962’s Travels with Charley. “They are ambassadors from another time.”

I got a late start the next day, having to wait for rain to stop. Pedaling up through the Rogue River-Siskiyou National Forest, I surveyed “partial cut” selective logging done recently to the steep hillside groves of thin fir and cedar, established plantations on old clearcuts that one day might mimic the giants of yore. But not in our lifetimes.

Rain resumed as daylight dimmed and, sweating and slipping amongst the ferns and huckleberry, I couldn’t find the elusive northernmost patch of redwoods, otherwise easy to reach in two small parks a few miles south, with their road signage, lovely trails, and interpretive brochures.

Dusk and hunger and dark Mozart sonatas rode with me back to civilization for a $6.89 McDonald’s combo #1—Big Mac, medium fries, medium drink. More than a thousand calories and more than three times the cost of a gallon of gas ($2.17) at the local Conoco. Likely trailed by regret. (It was.)

Ironically, though, sitting on his mobility scooter at the table next to me was a beatific retired logger, north of 80, drinking his free senior coffee and reading a newspaper. He looked over and wondered aloud why I was splattered with dried mud.

“Yeah, we used to pull a lot of redwood out of there,” he said, gargle-voiced. “Not many of ‘em left, is that right?”

Those fries? Much too salty.

Check out some excerpts from Crossings: