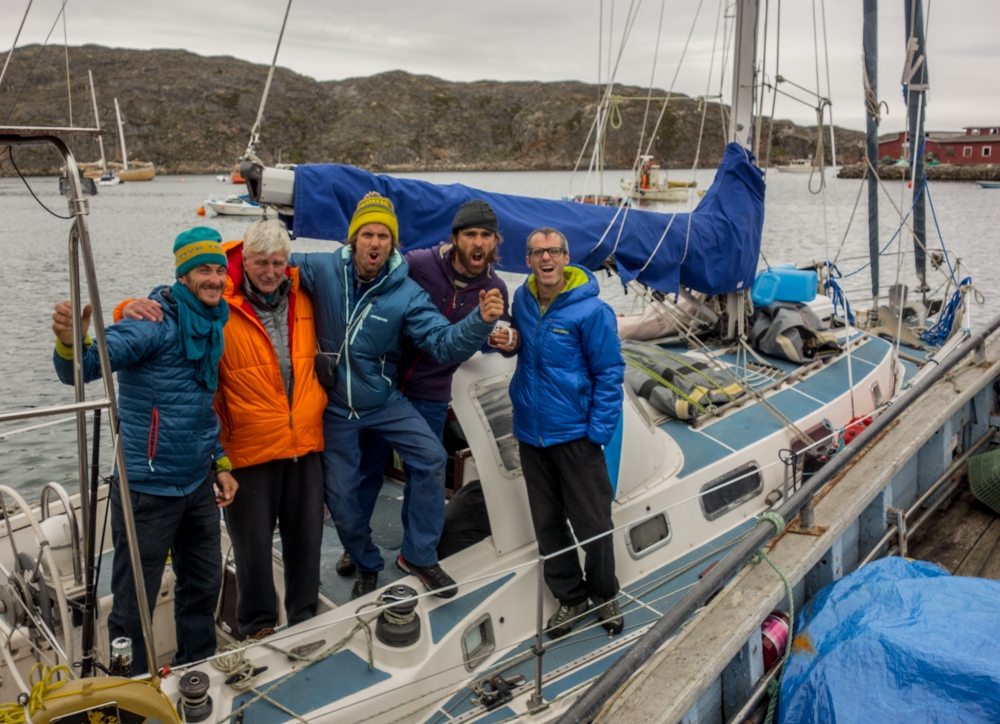 July 15, 2014—We are off again on an exciting adventure! Reverend Captain Bob Shepton is very excited to have the Wild Bunch—Sean Villanueva, Olivier Favresse, Ben Ditto and I—back on board the Dodo’s Delight for some jamming and big walls. Already four years have passed since our last expedition in Greenland with captain Bob. This time though we brought more musical instruments, more fishing equipment and more whiskey for our captain, all of which we hope will help us with our new assignment: testing the acoustics of some massive big walls located in the fjords on the east coast of Baffin Island.

We left Aasiaat one week ago and we’ve have had good moments so far but also harder ones. Yes, indeed, we missed the World Cup final and the ice hasn’t melted enough for us to cross to the Baffin Island side. Our captain is becoming very impatient and we are afraid that he would be quite willing to take some risks for us to reach Baffin Island. If we did get stranded by the pack ice and its pressuring current, Dodo’s Delight would most likely get crushed and sink. The good thing is that our captain is very familiar with that. He has two boats in Greenland, one of them he keeps below the water’s surface!

Four days of sailing with occasional stops for bouldering sessions brought us to the fjords of Uummannaq and its mountains. The ice cap and the ocean, filled with icebergs, look so unreal. It feels like we are on a different planet. There are some nice big walls here but it’s not easy to evaluate the rock quality from a distance. So yesterday we decided to go have a closer look and attempt some climbing on a nice looking 400-meter wall right above the settlement of Ikerasak.

We split into two teams and went for two different lines. Ben and Oli chose the east ridge, a line that seemed not too risky or more suitable for committed married men (almost) while Sean and I chose the right prow with its overhanging headwall. The climbing turned out to be a lot better than we anticipated. The granite here is very rich in holds and fun to climb. There were also some sections of rotten rock but fortunately we found our way through it alive.

Now we are cooking up some organic, free-range local meat and look forward to a nice lunch for recuperation. We’ll be in touch as the next exciting steps unfold. Stay tuned! 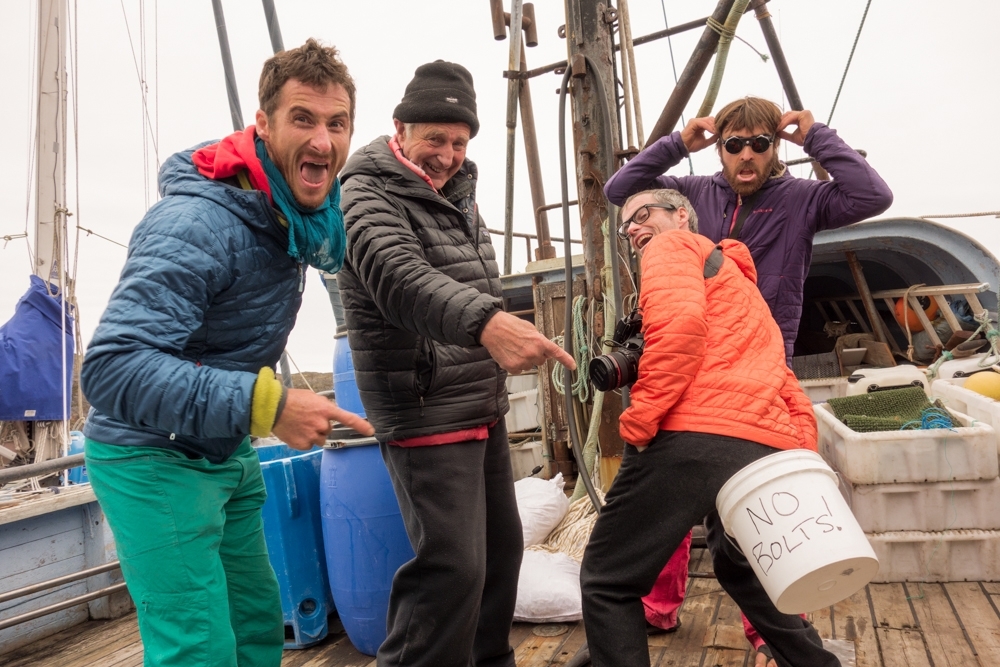 The ethic of our captain is very strict: There will be no bolts allowed on board! 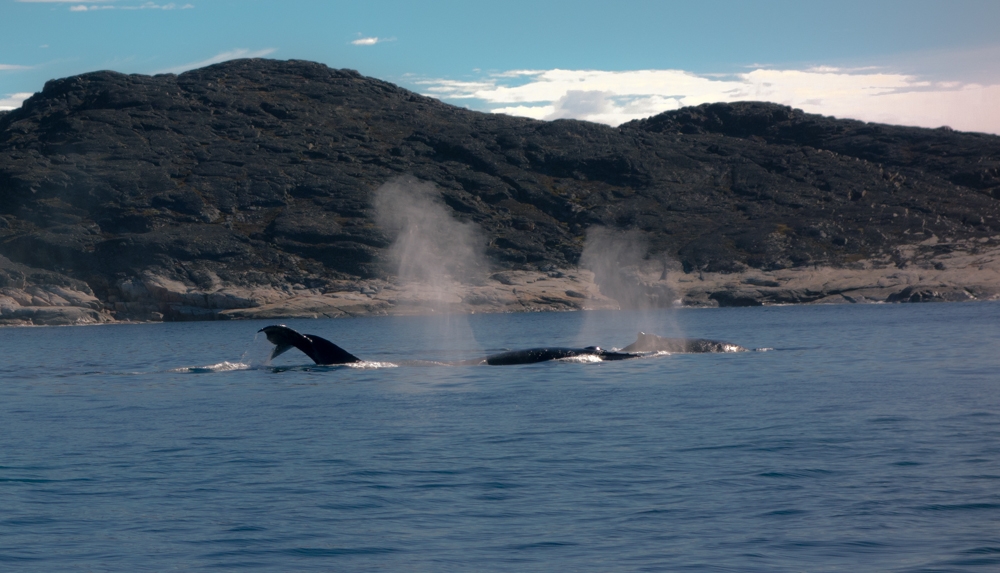 What a nice surprise to be escorted by whales on our way out from Aasiaat! 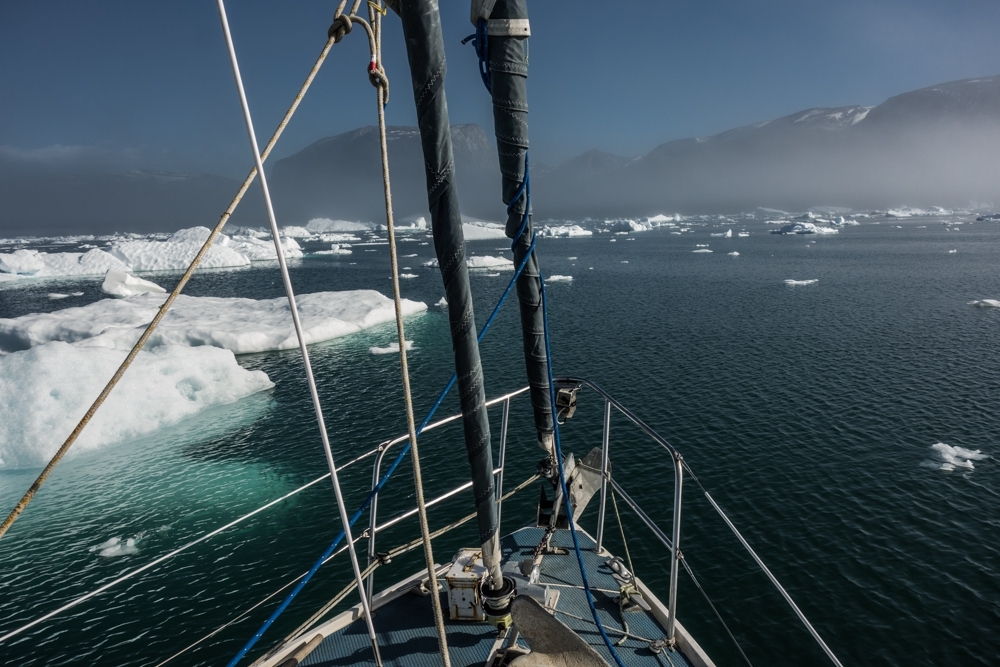 Tricky sailing through the ice but pretty fun as long as we don’t get stranded. 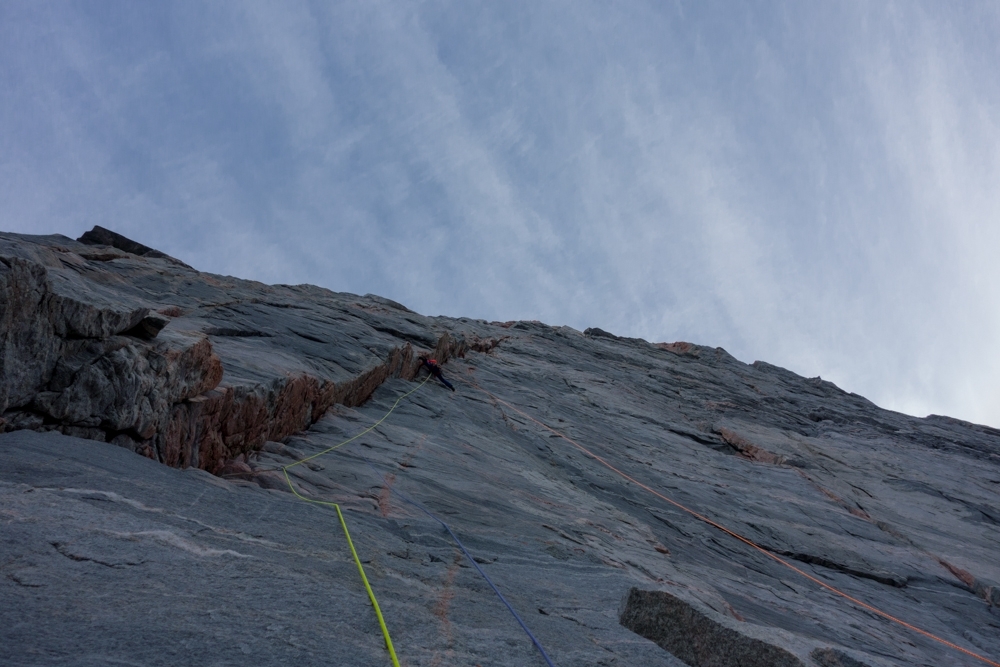 Fun climbing on these amazing overhanging cracks and dihedrals. 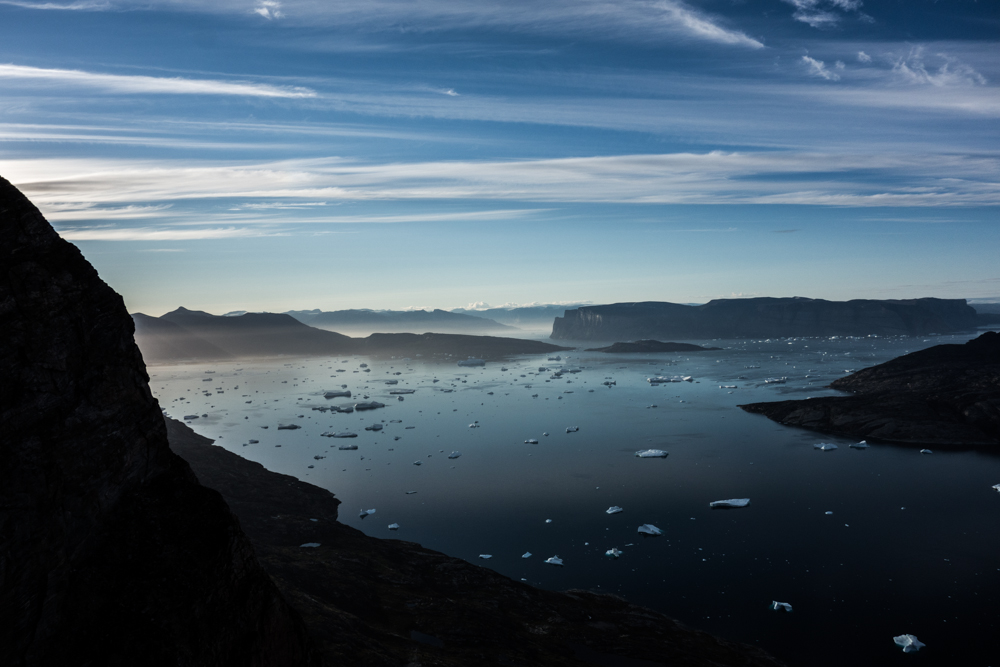 Our daily view of the fjords of the Uummannaq area. 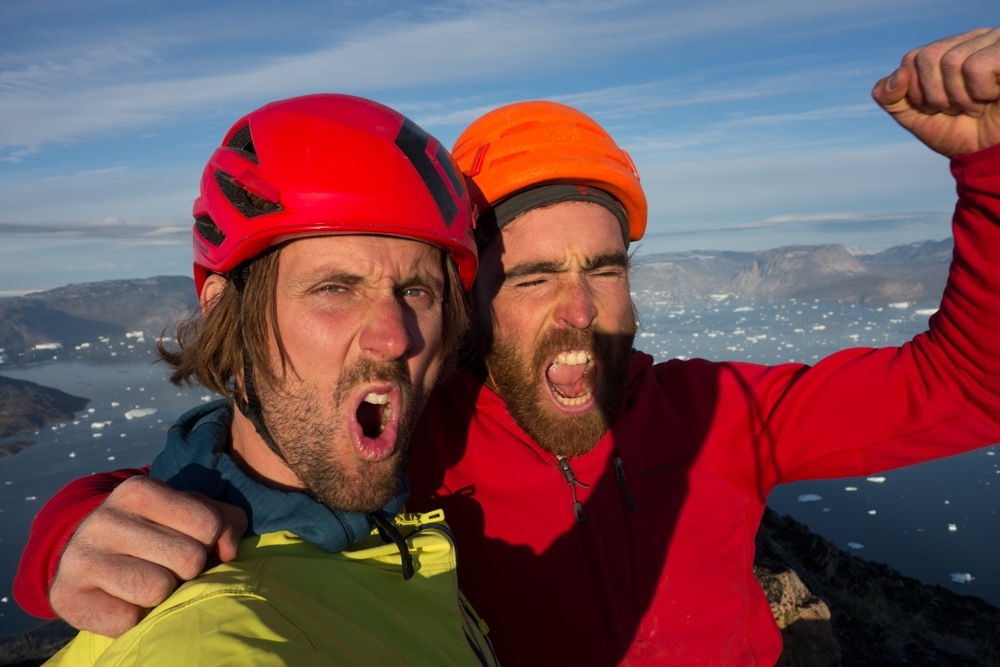 Our first summit shot on this trip. Yeah!

August 1, 2014—It’s raining but we aren’t sleeping in today! The ice chart we received yesterday showed a very positive evolution in the ice melting over on Baffin Island so we are very excited. Now it’s time for us to get ready to cross Baffin Bay.

We have just restocked with wine, whiskey and condensed milk. We have checked the sails, tightened up the cables of the mast and fixed everything well on the deck. Basically, for a crossing like this and with a fiberglass boat like we are on, you need to be ready for the worst to happen! We’ll have to pay a lot of attention to icebergs and mermaids, especially if the thick fog settles in or the wind blows too hard, or if both happen at the same time. But we are ready for it, at least we think so! 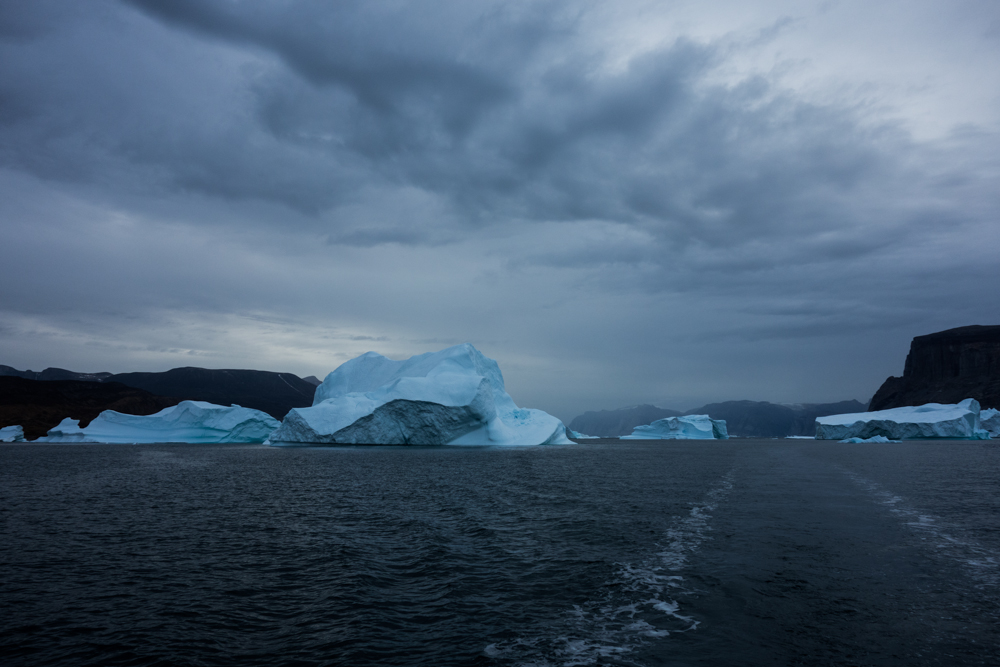 What it’s like to sail on a rainy day in Greenland.

We are now really looking forward to the walls on Baffin Island. Our last climbing experience on this trip was pretty intense. As usual we sailed around and picked a wall to climb. How we choose the walls we climb is not always very rational. It definitely has some logical aspects like the steepness of the wall, the acoustics (for jamming), lines and rock quality. But it’s also a general feeling about what looks appealing, and it tends to fluctuate. Some days you feel more confident and steep things don’t seem so difficult, or a wall that looks loose can still catch our interest. It’s all pretty dependent on our mental state and how we read it. Well, we must have been in a pretty high mental state when we chose to climb this last wall.

When we reached the base things that looked good from afar started to look different and way more intimidating. Me and Oli chose to aim for an obvious dihedral system while Ben and Sean chose a line of thin cracks and dihedrals. Right as I left the ground I understood the whole wall was shattered and it would be impossible to fully trust any of the holds or protections. I worked my way up about 20 meters and the rock began to crumble so I downclimbed and tried a different start. Again, I got about 20 meters up and got shut down by a bunch of loose flakes blocking my progress. Again I downclimbed and took a better look at the rock face. It all seemed loose so Oli and I opted to go fishing instead of climbing. This wall wasn’t meant to be climbed by us. Somehow being confronted by your limits and accepting them is, for me, one of the most interesting parts of exploring new climbs. Of course, it wasn’t without a little knot of uncertainty that we called our captain to come rescue us. 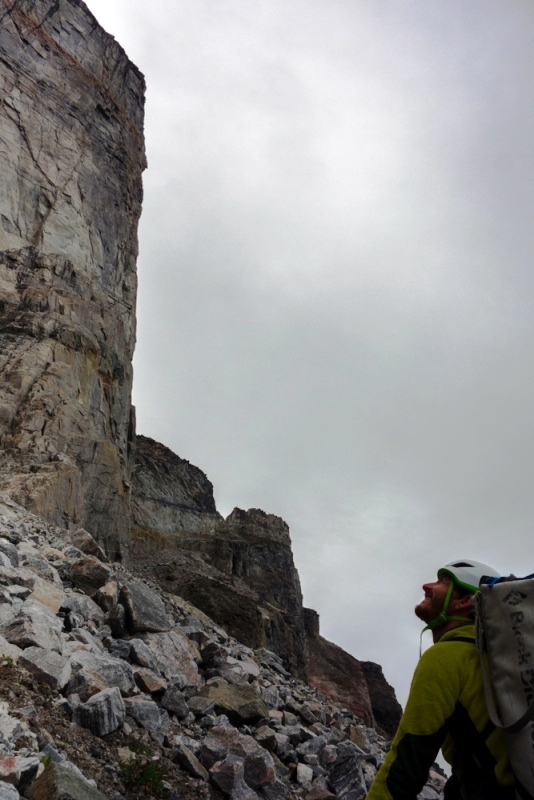 Oli approaching the wall with confidence. It looked good from afar, but far from good up close. 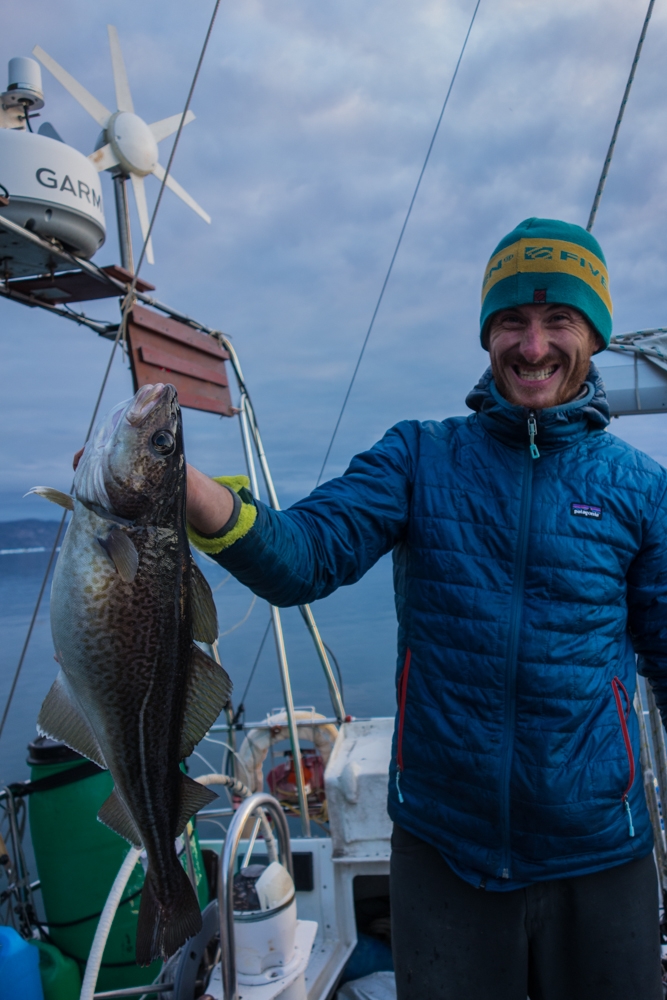 Our daily source of protein.

Meanwhile, Ben and Sean managed to take off on their line with very little protection and lots of loose rock. Ben led half of one pitch and backed off the loose dangling blocks. From the ground we could hear him reasoning with Sean to bail, but Sean was too excited to bail: “No way man, it’s too good!” They committed to the wall and spent 24 hours battling through 500 meters of steep challenging choss.

“For me, the climb was a metamorphosis,” says Ben. “At first I was super stressed about the risk of climbing such extreme choss, but soon I found a rhythm that allowed me to enjoy the climbing, thanks to Sean leading every pitch.”

Sean had found his happy place among the maze of loose blocks and circuitous cracks. Though by the end, the continuous difficulty pushed him near his limit. We are a little worried because he has now expanded his capability of taming the inner beast and physical difficulties seem trivial. We aren’t sure when he will again find this nirvana, but we hope it isn’t soon—and not with any of us as his partner.

The ascent was accompanied by a host of whales and dazzling lightshows that kept Ben entertained as he belayed Sean on the two-hour-plus leads. They compromised on a name for the route: No Place for Humans, aka, Sunshine and Roses.

We are glad they are back from their adventures safely, and we’re super psyched for the next stage. 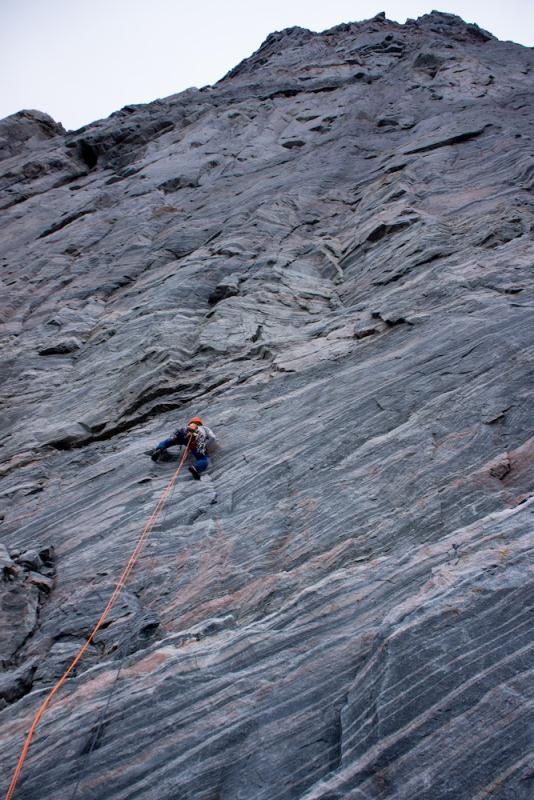 Sean heads up the Funky Tower. 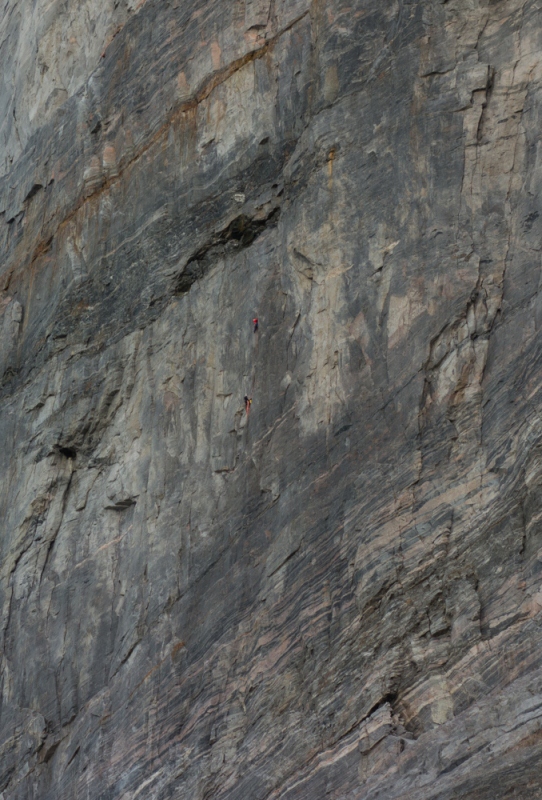 Ben and Sean on the second pitch of No Place for Humans, aka, Sunshine and Roses. 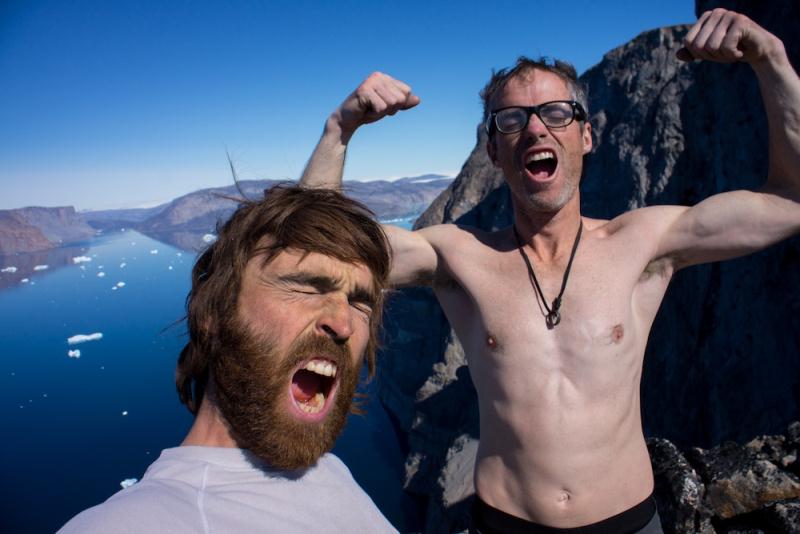 Sean and Ben explore the meaning of life atop their new route. 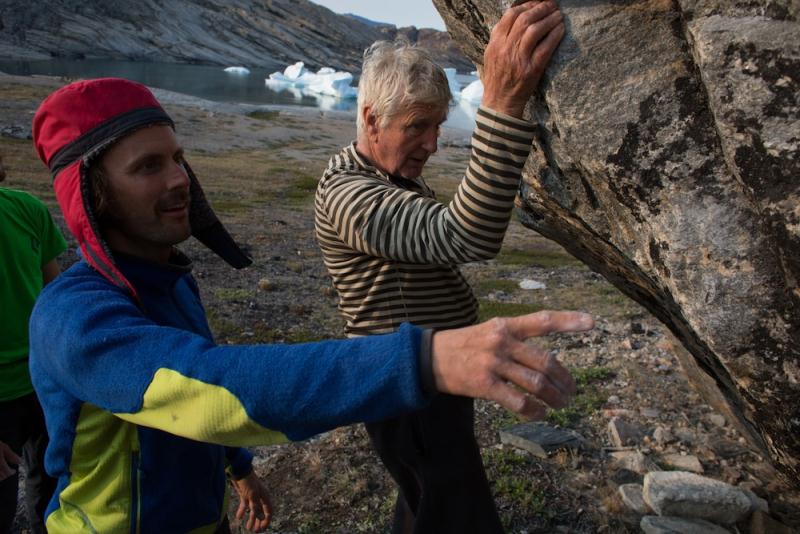 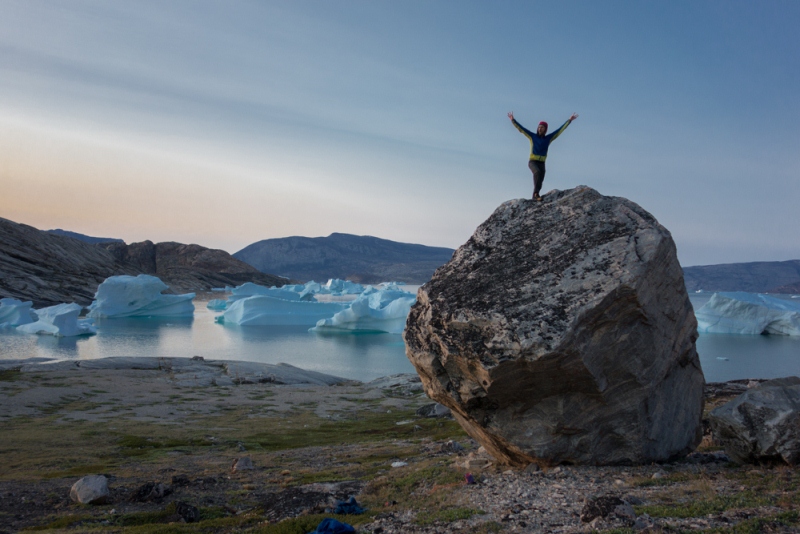 As the adventures unfold we will keep you posted.

(Continue the adventure with Part 2)