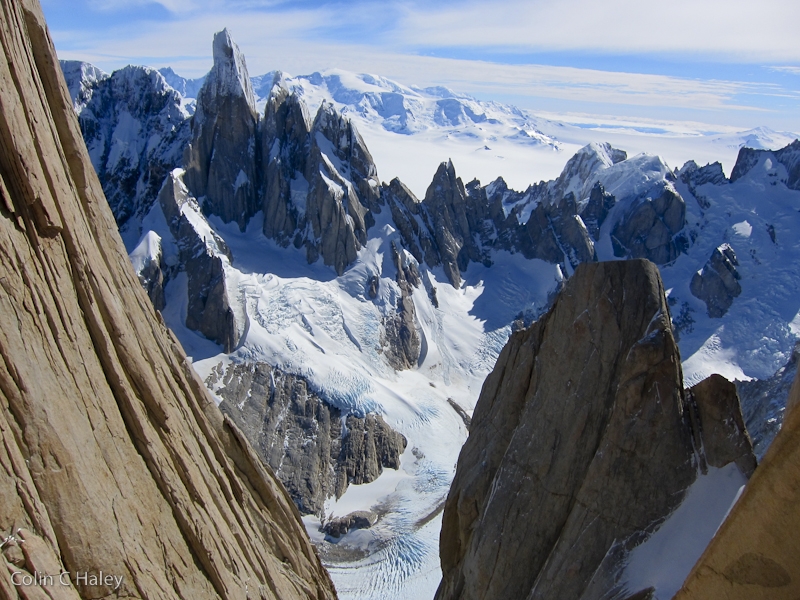 “See you down there, f***er!” writes Ole Lied – a gigantic, hard-drinking, Norwegian party animal. He dresses in dark Scandinavian leather, stuffs his mouth with snus (little tea-bags of chewing tobacco, quite popular in northern Europe), and every now and then works himself into a berserker rage, attacking big, steep mountains, and returning home with beautiful routes as his trophies (such as “Venas Azules” on Torre Egger). Every November, I convene with Ole, some other Norwegian alpinists, and all the other Patagoniacs in El Chalten, Argentina, for another dose of pretty much the most technical, most fantastic, most intense and most fun alpine climbing on the planet – Patagonia’s Chalten Massif.

Editor’s note: Colin wrote this piece just before leaving for El Chalten. He’s been down there three weeks now and already has a handful climbs under his belt. Visit patagonia.com/vidapatagonia to keep up with Colin, Mikey Schaefer, Kate Rutherford and more of our friends and ambassadors down in Patagonia. We’ll have live feeds to their Instagram accounts, tweets and blog posts throughout the season.

Why does Norway, a country with the population of Washington State, have such a big presence in Patagonian alpinism? Admittedly, the mountains of Patagonia are very difficult, the weather is often very foul, and they certainly have a large amount of dormant Viking badassness in their genes, but I think the real truth is where Ole and his countrymen are coming from.

The epicenter of the Norwegian alpine-climbing community is Romsdalen – a beautiful place, with big, steep walls and 19 hours of daylight in late June. By the autumnal equinox, things even out and every human all over the globe gets an equal share of daylight and darkness. But things change quickly at the equinox (it is, after all, the peak of the absolute value of the derivative of the daylight curve, meaning that every day in late September is noticeably shorter than the previous one), and by early November the sun sets in Romsdalen only seven hours after rising – a good time to take off! Rather than ransacking the cities of Europe like their ancestors, my Norwegian climbing friends head to Patagonia and ransack granite spires plastered in ice.

Even though my homeland, the Salish Sea Basin, lies a mere 5,400 kilometers from the equator, the dwindling daylight in autumn is still a rough blow, and it’s coupled by a very strong climactic change. In Squamish and The Cascades, we enjoy the best climbing weather in North America for three months of summer, and then the monsoon arrives. Fall is the worst season in the Pacific Northwest. The days are short. The rock is wet. The skiing isn’t very good yet. The winter climbing isn’t very good yet. It’s a perfect time to leave. Hopping over the equator is the ultimate trick we can play on nature without pissing her off. In the past eight years, I have celebrated sixteen summer solstices!

Of course, chasing daylight isn’t the only reason I’ve become a Patagonia junkie. The rock is the highest quality you will find in the mountains, anywhere. The ice routes are just as good. The summits are as pointy as they come, and have no easy way up. The faces are up to 2,000 meters tall, with little terrain easier than fifth class. There are no bullsh*t peak fees. You don’t need a liaison officer. You don’t need to acclimatize. The weather? Yeah, it can be pretty nasty, but otherwise these mountains would be too easy. The descents? Yeah, they can be quite epic – I have passed several entire nights of my life rappelling, from sunset to sunrise. 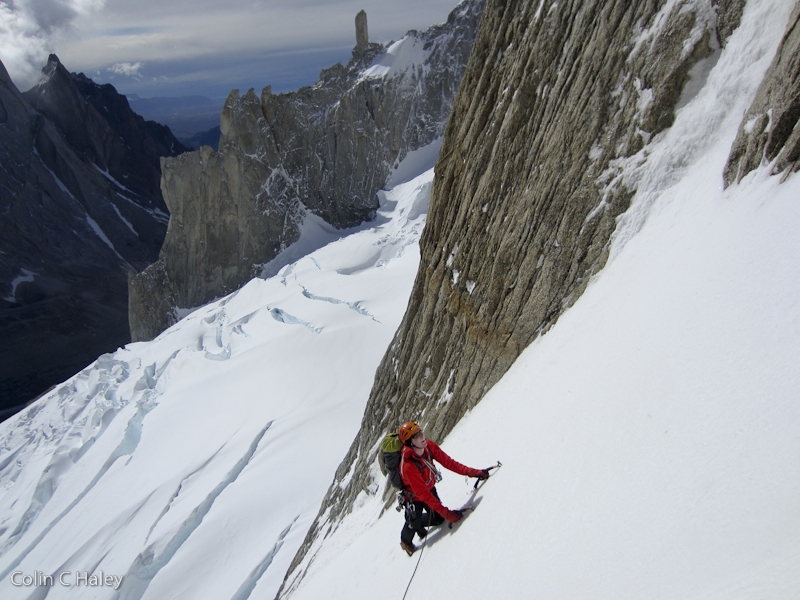 As someone who spends a huge amount of my time wandering around mountainous terrain, I feel a strong connection to the climate and the seasons. Each season for me has snow conditions associated with it, activities associated with it, clothing associated with it, and emotions associated with it. Autumn has a subdued grounded sensation, slowly decelerating into hibernation. Spring feels more exciting, more open, more energetic. Fall is a downer. Spring is an upper. Leaving autumn in the Pacific Northwest and transporting yourself to spring in Patagonia is like swapping methadone for methamphetamine.

One of the stereotypes of Patagonian climbing is that more time is spent relaxing than climbing. People imagine weeks of bad weather spent leisurely drinking mate and chatting, followed by a couple days of activity. My experience in Patagonia has always been the opposite. From the moment I arrive in El Chalten until the moment I leave I know that I will be running around in a frenzy. I don’t have “free time” in Patagonia. I’m either hiking, climbing, rappelling, bouldering, sport climbing, packing for the next climb, drying gear, filing crampons, lubing cams, refueling (aka eating), repairing clothing, studying photos, checking the weather forecast, shopping for food, stretching or sleeping. I think any place is as busy or relaxed as we make it, and I usually prefer to make it busy! 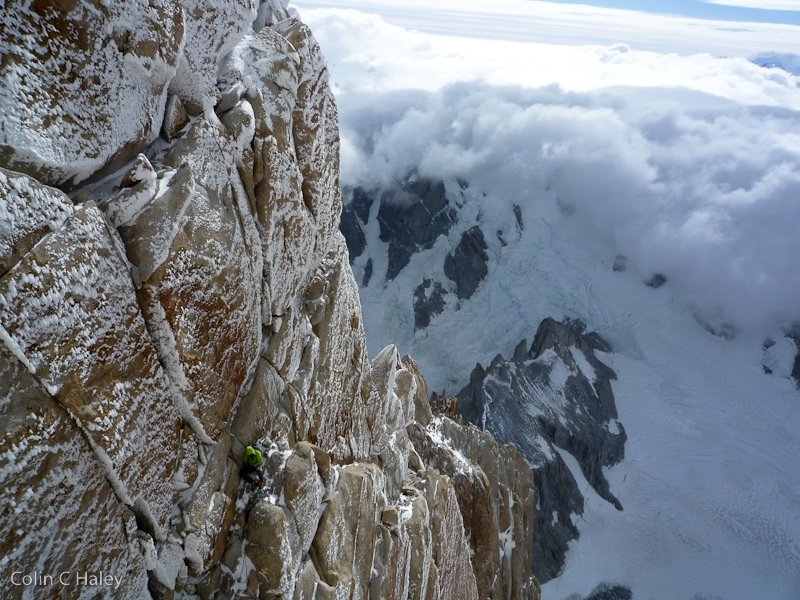 Dylan Johnson belaying the last pitch of the “Supercanaleta,” as clouds roll off the South Patagonian Icecap.

Summer lasted a long time in the Pacific Northwest this year, but today the rainy season started. My natural instincts tell me to settle in and get cozy – start wearing a hat and waxing my skis – but I have a plane ticket to El Calafate. It’s raining and it’s dark at 6pm, but there is a tingling inside me because I know what is coming.

Over the past few weeks I have slowly been amassing a pile of gear that will come to Patagonia – ropes, slings, carabiners, crampons, stoppers, gloves. I have been seeking out steep, burly cracks – one final, desperate bit of procrastination training. And, of course, I’ve started looking at the weather forecast in El Chalten again. Fall is a relaxed time, and I’d better enjoy it while I can, because three-and-a-half months of non-stop excitement begins soon!

So, here we go… another Patagonia climbing season is about to begin. Time to take a deep breath and get ready for some incredible experiences, dragging our abused bodies up and down some of the world’s most beautiful mountains.

Live coverage from Patagonia: See Instagram photos, tweets and blog posts from our friends and ambassadors at patagonia.com/vidapatagonia or with the #vidapatagonia tag.