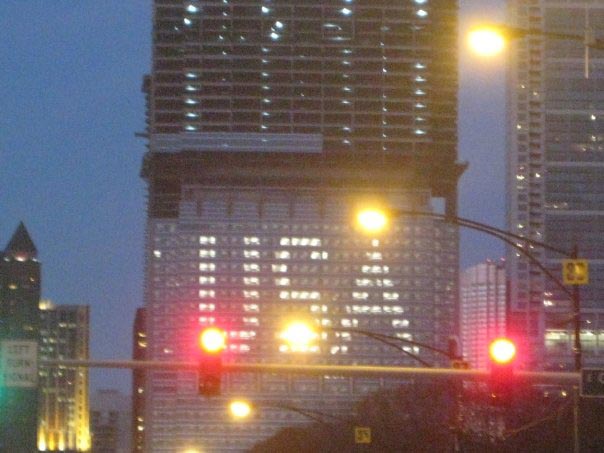 While we wait in anticipation for tomorrow's inauguration ceremony, let's travel back in time for a moment to the evening of November 4, 2008. The place: Grant Park, Chicago, Illinois. The event: Election Day. The author: Andrew Graves from Patagonia Chicago.

The crisp, cool, autumn evening air was matched by the emotional excitement of the throngs gathered in hopes of being present for one of the most historic moments of recent times. Thousands waiting with nervous anticipation to hear those words, “President-Elect, Barack Obama.”

The wait started for me almost ten hours earlier as I sat down in line on my cheap, newly acquired lawn chair to wait for the makeshift gates of Grant Park to be opened. My girlfriend, Kimberly, and I arrived at the park at around noon (only 8.5 hours before the gates were to be opened) equipped with some food, drink, a deck of cards and the aforementioned lawn chairs. We were only about 100 people deep in line, and superbly pleased that we would be front and center for what we were expecting to be an historic occasion.

The weather was strangely warm on that Tuesday as fellow line waiters offered their sunscreen for community use. That is what it felt like: A community. Everyone in line was of similar mind, and focused on the same goal.

Apparently our lawn chairs were unique enough to draw attention. Kimberly and I were interviewed by several radio and TV stations, magazines, and newspapers, and by journalists from several different countries – French, German, Canadian, Swiss, journalists who seemed to be just as excited to make their voices heard as those of us who could make our voice heard through voting.

Occasionally I’d hear someone say, “I’m nervous. What if he doesn’t win?” To which a reply came from another stranger, “Don’t worry. It’s our time. We have to do this now. We WILL do this.” There were no facts in that answer. No statistics outlining which states needed to be won, or exit poll numbers. That small, simple encouragement seemed to be enough, however, to quell any anxiety for what could happen if things didn’t go our way. People in earshot silently nodded in agreement, or yelled emphatically, “OBAMA, OBAMA, OBAMA!” Our time was coming.

Our time, that is, to move on to the next checkpoint. The one into which we could not bring chairs, or food, or drinks. We quickly leaned our chairs against a wall on the sidewalk, knowing full well that someone less fortunate than us would be gaining furniture to make the cold Chicago night a little more comfortable. As we slowly moved to Checkpoint 2 (that’s really what they called it) unison chants rose from the crowd, “YES WE CAN. YES WE CAN!” The power of hope was so evident, that I began to tear up. It caught me by surprise that six hours before the polls in California were to close, I was already being overcome with emotion.

After hours of rotating between standing and sitting on hard asphalt, they finally lead us to Checkpoint 3. By the way, there were four in all, including metal detectors. Almost there!

After entering the ticketed section of the park, people began to run toward the stage. It was set with 25 American flags that seemed to hold more meaning than they have in almost eight years. The media was everywhere – CNN, MSNBC, WGN Channel 9 Chicago. People were hugging and high-fiving each other, some friends, some total strangers. CNN was being broadcast on the Jumbotron screens for all to see, and during commercial breaks loud, happy music was blared from the enormous speakers.

As time passed, and CNN’s projections were announced – Ohio, Indiana, North Carolina – the energy and emotion ebbed and flowed like the waves of Lake Michigan just yards away. The cheers and screams were deafening, and exhilarating. There is something awe-inspiring about 150,000 people cheering and chanting in unison. “This is Obamapalooza!” I thought.  Again, the tears welled, up, and the lump in my throat grew. 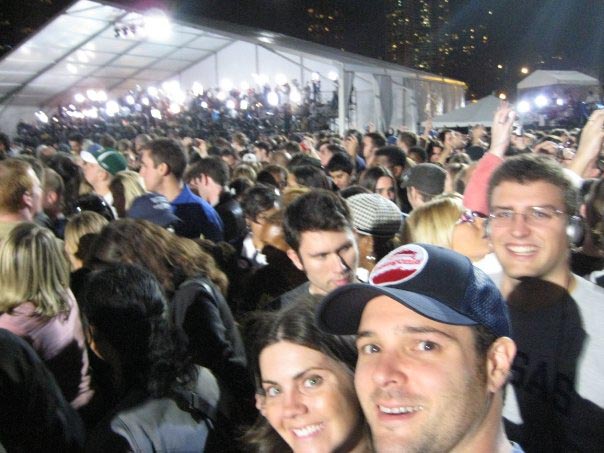 The moment the poles closed on the west coast, and the projection came in that we had elected Barack Obama to be President of the United States of America, is a moment that I, and the thousands of people with me in Grant Park, will never forget. I know I would never forget it if I had been at home on my couch, but there was something about BEING there. Looking at the historic win on the TV screen, and then turning and seeing the very podium not 60 feet from my face from which, in a few minutes, President-Elect Barack Obama would give a speech. A speech that touched us all, and renewed our hope, and also helped us see the reality of the hard battle we have before us.

The air was crisp and cool. History had been made. And I was there.