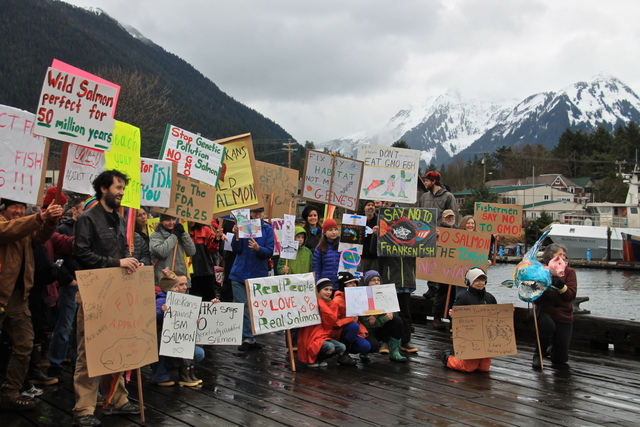 Why the opposition? For us who live in the nation’s largest National Forest, the Tongass rainforest, our economies and our identities are sustained through wild-as-can-be salmon. Wild Alaskan salmon generate over $986 million dollars and 11% of regional jobs in Southeast Alaska, making the accidental introduction of GMO salmon into our oceans a huge threat to these economies. This threat is not only limited to fishing economies, it continues to our health since the risks of eating genetically engineered salmon by humans, and marine animals dependent on salmon, are unknown.

Initially, the FDA opened up the period to comment on its environmental assessment for GMO Salmon on December 26th, giving the public only 30 days to voice their opinions on Frankenfish.

For Paul Rioux, organizing a rally in Sitka to protest genetically engineered salmon was one way he could stand up and make his voice heard. “I saw that there were rallies going on in other parts of the country, and I decided that it would be nice to do one here,” Paul said.

Through Paul’s actions, over 130 people came to the rally, which was then publicized by Alaskan US Senator Murkowski, Senator Begich, and Alaskan State Representative Jonathan Kreiss-Tomkins. Four days after the event, the Food and Drug Administration announced they were going to extend the period to comment on genetically engineered salmon by 60 days, making the new deadline April 26th, 2013, and I’m certain that Sitka’s activism helped to spur this extension.

In a place where the fishing industry is the largest contributor to the economy and our way of life, Sitkans take our wild salmon seriously. The town may be small, but Sitka made its voice loud and clear with one message: No GMO Salmon! Photo: Sitka Conservation Society

To make this happen, we started small. We gained support from fishing organizations like the Alaska Longline Fishermen’s Association (ALFA) and the Alaska Troller’s Association (ATA), who passed the message on to their members; we held sign-making parties at local businesses and schools; flyers were created, posted, and handed out, featuring both information on the rally and how to submit a comment to the FDA opposing genetically engineered salmon; our local radio station KCAW had us on their Morning Interview, where myself, Paul, and David Wilcox, a local middle school student running across the country in protest of GMOs, discussed the negative impacts of genetically engineered salmon; both the Mudflats blog and Fish Radio hosted information on the rally to raise awareness to their subscribers that the FDA was considering approving genetically engineered salmon.

Technology more than ever can be used to organize our social networks, tell our stories to folks that live in communities all over the country, and encourage decision makers to listen to their constituents. This can happen with any issue that we find ourselves passionate about, and for Paul that issue was the health of our wild salmon from the Tongass National Forest.

It is right here in our community that we can create the world we want to see through our actions, but this can only happen through an engaged, active citizenry. Far too often I encounter folks who are somewhat cynical about the democratic process, folks that have lost faith in the power of their voice. But in the end, if no one takes action nothing gets done. Sitkans like Paul Rioux remind us that our voice is a catalyst for change, and by speaking and standing up for what you believe in, we can continuously create the world we want to live in. 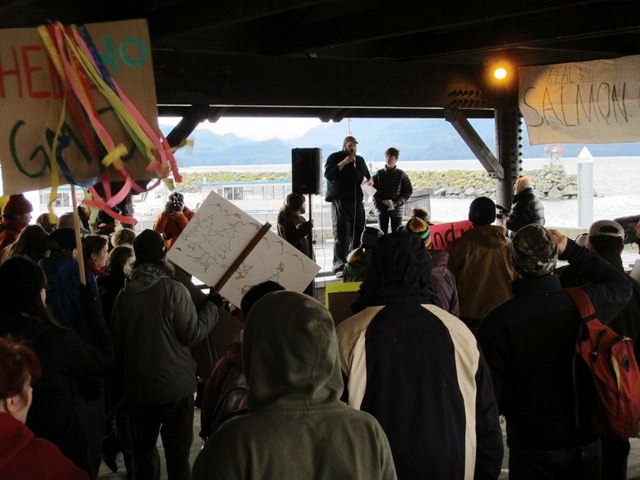 Rally organizer Paul Rioux, speaks to the crowd about the potential dangers of genetically modified fish to the Alaskan economy and ecology. Photo by Sitka Conservation Society

Paul’s proactive approach against GMO salmon in a small, rural Alaskan town is just one example of the significance of grassroots organizing. Rather than wait for outside governmental forces to make decisions for us, let us stand up together, generate the renewable energy of people power, and work towards a future created and supported through community action. To do this, all of us around the country and world need to be supporting each other’s grassroots organizing while reminding each other that our individual passion, blended with support from those around us, can make situations that seem unmovable become dynamic.

If you haven’t submitted your comment to the FDA, please do so now – it takes minutes! For the required field Organization Name, put “Citizen” if the comment’s coming from you, or your organization’s name if you’re representing a group. You can learn more about wild salmon in the Tongass rainforest at www.sitkawild.org.

Patagonia covered the issue of genetic engineering during our 2001-2002 environmental campaign; in 2003-2004 we focused on the importance of protecting wild salmon stock. You can read the essays from both of these campaigns in our online archive.

Ray Friedlander is the Tongass Forest Community Organizer at the Sitka Conservation Society.