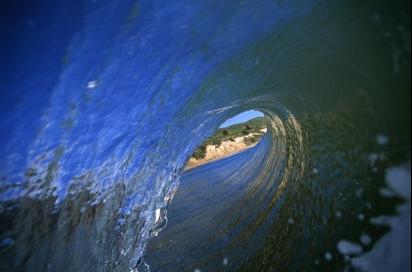 I have been asked many times what it’s like being inside a tube. My short answer is simple, “it’s great.” The long answer is quite a bit more involved.

To get inside a tube long enough to have time to think about what it’s like requires a long list of factors. Luck is first on the list, especially in the early stages of a surfing career. Still, even experienced surfers feel lucky after a good tuberide.

But more than anything, tuberiding is a result of a great deal of dedicated practice, lots of paddling and much time spent in the water. If half that time had been given to the pursuit of education or work – well that’s what a parent would say. But to a surfer there is no greater sense of accomplishment or fulfillment than a successful tuberide.

One key ingredient is the wave. Not all waves form the tunnel necessary for a tuberide. I was fortunate to have two surf spots available when, after 10 years of surfing, my skills were sufficient that I could make a conscious attempt at riding in the tube.

I grew up on the south shore of O’ahu and enjoyed many sessions at the Ala Moana Bowl. There I was able to witness the tuberiding expertise of two pioneers of this particular skill: Conrad Cunha and Sammy Lee. On Pole Set days when the south swell was pumping, these two characters showed us all how to ride deep within the bowels of a curling wave. Having the luxury of seeing it firsthand made trying it on my own a lot easier.

Conrad and Sammy rode heavy, crudely shaped longboards, very ill suited to riding inside the tube. Surfers of my generation had much improved surfboard designs brought on by the shortboard revolution.

Later, I graduated to the Country – that’s what we called the North Shore back then. There was a place named the Pipeline that had the biggest tube of them all. Skills I had developed at Ala Moana helped, but the learning curve at the Pipeline involved paying some serious dues.

My relationship with the spot initially was based on fear. It was a scary place. Eventually the relationship changed to one of the utmost respect. The Pipeline figuratively and literally killed surfers on a regular basis. With better equipment and a lot of trial and error, I found what I had been seeking. I was able to ride inside the Pipeline tube often, and long enough, to take a look around and think about it.

The first thing that got my attention was how the noise of the crashing wave suddenly went silent. It was eerie and made me think about silence being deafening. Was it some kind of pressure that affected my ears, or something else? Another interesting aspect was how everything seemed to slow down. This slow motion sensation, combined with the silence, had me wondering whether I had entered a different world from the one outside the tube. The most distinct impression I experienced inside the tube was a feeling of complete awe.

When I was attending high school at Punahou Academy, some of the teachers surfed along with many of the students. Peter Cole, Fred Van Dyke and Ricky Grigg were considered to be some of the best in the big waves of Hawai’i. Peter Cole was my algebra teacher and an avid surfer. During one of the weekly sermons, our school chaplain, Reverend Rewick, invited Peter to speak to the entire student body during a chapel assembly.

Peter related a surfing experience at Sunset Beach where the wave tubed over him, and in that moment he saw God. I thought it sounded blasphemous and quickly looked toward the Reverend. I was surprised to find him smiling and nodding his head in agreement.

It was quite a few years later that I found myself in a position to relate to what Peter was saying. The rapture a surfer feels in a big tube is intense, an exaltation of mind and feelings. Some would assume this form of bliss must be spiritual in nature. I agree with Peter that the moment is at least supernatural if not altogether religious. So keep surfing and look for the light at the end of the tunnel.

If you're interested in more stories from Gerry, check out his new book Surf Is Where You Find It – a hardbound collection of 38 stories with new and vintage photographs. Choose from the regular edition or the boxed, limited edition that has extra photos and is signed and numbered by the author.

There are few images as iconic as Gerry Lopez calmly slotted on a perfect, eight-foot day at Pipeline. After redefining the art of tube riding on the North Shore of O’ahu, his focus turned to Indonesia, where he pioneered legendary spots like Uluwatu and G-Land. Now based in Oregon, he surfs, writes, shapes, and shreds powder days near his home in Bend.